Apple's minuscule new iPod is big on style, but how will it play after all the hype? 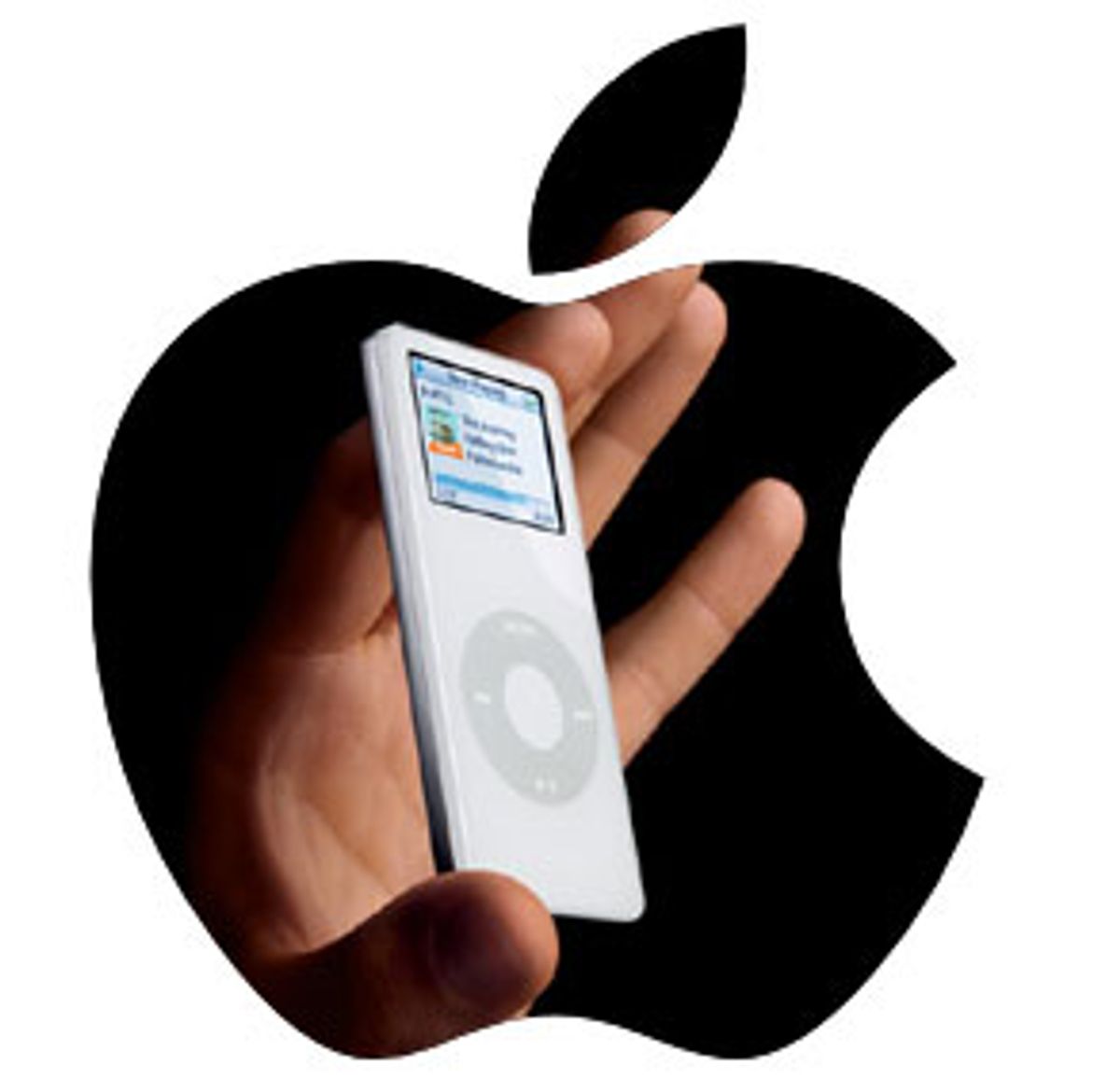 Almost four years ago, I received a plain white card in the mail from Apple Computer inviting me to an exclusive event at the company's headquarters in Cupertino, Calif. The invitation, which Apple had extended to a couple hundred tech reporters like me, was coy: The company said only that it would unveil a "breakthrough digital device" that was "not a Mac." It sparked a media frenzy. For more than a week, hacks were wild with fevered speculation. Would Apple unveil a "high-definition" DVD recorder? A new Newton PDA? The most souped-up MP3 player the world had ever seen? The sky seemed the limit.

But when the day came, and CEO Steve Jobs delivered unto the world a small white thing he called iPod, many Mac fans felt cheated. It was just a standard-spec MP3 player, overpriced at $399, and its capacity (5 GB) was smaller than that of several other devices on the market. The iPod wasn't very light, it wasn't wireless, and it worked only with Macs. As we left the press conference that day, Apple P.R. aides gave each reporter an iPod to take home; I traded mine with a friend for a TiVo.

In retrospect, of course, we -- me and the rest of the pooh-poohing tech press -- were way, way off about the iPod. We were far too cynical. We focused on its cost and capacity and its failure to live up to Apple's hype, while overlooking its beauty and simple interface. We underestimated Apple's marketing savvy. Nor did we see how the thing could fit into a larger, brilliant strategy by Apple to remake the music industry with $1 digital downloads. As of June, Apple has sold 22 million iPods, 6 million in the last quarter alone; the company has a 74 percent market share of the digital music-player business.

I was reminded of my first, mistaken impression of the iPod again on Wednesday morning, when I went to see Jobs unveil yet another iPod model: the delightfully tiny, witheringly beautiful, and astonishingly overhyped iPod Nano. All Apple events are heavily anticipated, but Wednesday's affair had been especially celebrated. The invitation that Apple sent the media last week promised to spark a revolution as great as that of the first iPod: "1000 songs in your pocket changed everything," it said. "Here we go again." Mac fan sites had gone ape with speculation, and even the mainstream, non-tech press ran pieces wondering what the new thing would be.

During the week, the rumor mill had settled on one likely Apple announcement: an iTunes-enabled cellphone. Jobs dispatched with that speculation early in his presentation, unveiling Motorola's Rokr phone, which can store about 100 songs. In addition to the phone -- which looks like a fine though not spectacular thing -- many Mac fans had also been looking forward to something else. Something surpassingly cool. Something life-altering. Something that would, as Apple had promised, change everything. Something like, say, a video-iPod. Or an Apple-branded TiVo.

Now, after seeing and holding the new Nano -- but not doing anything more with it; Apple doesn't need to give reporters schwag anymore -- I confess to feeling cheated in the same way I felt been cheated four years ago. The diminutive thing just doesn't feel as big as Apple promised. The Nano doesn't play videos (as far as we know), it's not wireless, and it's not a TiVo. A quick survey of my Mac-obsessed co-workers suggests the disappointment is widespread.

The thing is, though, we're all probably wrong. The tiny Nano -- which Jobs unveiled in customary grand fashion, with a videoconference chat with Madonna and a live performance by an unapologetic Kanye West -- may be bigger than any of us imagine. It's true that at $249, the 4 GB model is, on the face of it, not that great a value. A full-size iPod -- a 20 GB model that holds five times as many songs -- can be had for only $50 more.

But the iPod Nano is breathtaking. Thinner than a No. 2 pencil, weighing less than $2 in quarters (these are Jobs' own stats, approximately confirmed in my encounter with a display unit), the Nano looks cooler than any other iPod -- and probably any other electronic device -- you've ever seen. Do looks matter? They seem to matter to Apple's customers.

The iPod Mini, which the Nano replaces, was Apple's most popular device (and was, therefore, the most popular MP3 player in the world). The Mini did so well not because it was cheap, or because it carried a lot of music -- its storage capacity and price tag were about the same as the new Nano -- but, people say, because it looked good. And if a significant number of Apple's customers are interested in a great-looking thing, the Nano, which is far prettier than the Mini, should warm their hearts.

There is, of course, something to be abhorred about incrementalism. One of my office mates says she wishes Apple would stop making devices that are each just 5 percent better than the last one, all while pretending that each new thing will change life on earth as we know it. After all, the iPod Mini, the Shuffle, and now the Nano are just all variations on the same theme -- they play music. Will Apple ever create anything that does anything else? Maybe its time Kanye West had a chat with Jobs about the importance of taking a risk that could imperil a career.

But I'm not going to carp. I've often been criticized by readers for being too critical of Apple and its products (my defense is that cynicism is a natural reaction to Jobs' preening). This time, though, I'm willing to give Apple the benefit of the doubt. When Jobs first promised, four years ago, to alter the way we experience music, I didn't listen, and I got schooled. On Wednesday, Jobs called the Nano "the biggest revolution since the original iPod." The thing's very nice, and he could be right again.