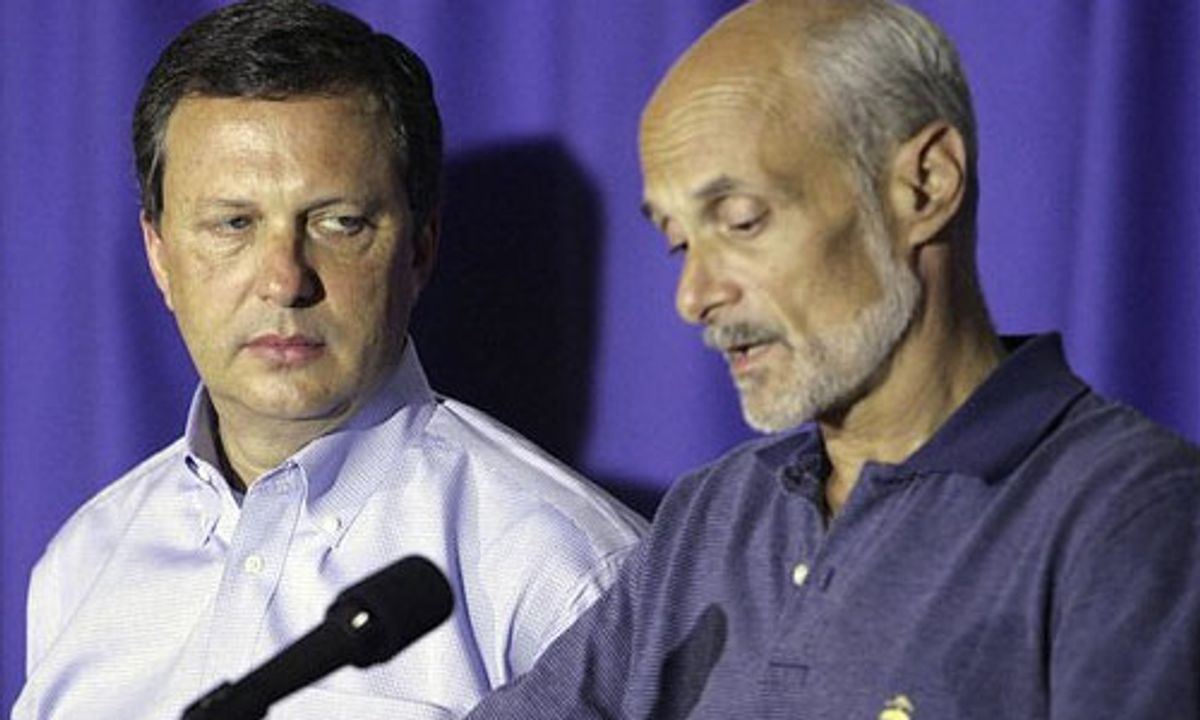 Nancy Pelosi, the top House Democrat, who this week demanded that FEMA chief Michael D. Brown be given the heave-ho, said on Friday that "at last" President Bush was following her advice. "The federal response to this disaster must be managed by a capable leader," Pelosi said in a statement. She underscored news reports that Brown and the White House had exaggerated his résumé as an experienced manager of emergency services.

Pelosi, on Wednesday, urged Bush to fire Brown because of "all that went wrong" in the federal government's response to Katrina. In a news conference on Wednesday, she described Brown as having "absolutely no credentials" to deal with the massive disaster.

The federal agency's inadequate response to the storm has galvanized partisan tensions on Capitol Hill. Pelosi praised Allen as a good choice to move forward now that Brown is gone. "With qualified, experienced and effective leadership on the ground, we can work together to provide the victims of Hurricane Katrina with the income, food, clothing and housing resources they so desperately need to begin the long process of rebuilding their lives," she said.

It was a bad day for Brown, who was still employed at FEMA as of Friday evening. Press reports had him dispatched back to Washington. Scuttlebutt in town characterized his career at FEMA as kaput. But administration officials said on Friday that his removal -- from the scene of one of the worst natural disasters in American history -- was more or less routine.

On Friday, Time magazine said Brown's official FEMA bio and his White House profile appear to have exaggerated his slim experience as a manager of emergency services. Brown's FEMA bio claims he served in Edmond, Okla., "as an assistant city manager with emergency services oversight." A White House announcement in December 2001, following Brown's appointment to a top spot at FEMA, described the job as "overseeing the emergency services divisions."

But Time quotes one Edmond city official as saying that Brown, as an assistant to the city manager, was "more like an intern. Department heads did not report to him." Another city official remembers Brown mostly for always being on time and wearing a "starched white shirt." A FEMA spokeswoman told Time that Brown believes that a "large portion" of the issues raised by Time were "very inaccurate," that Brown did start as an intern but later had a distinguished record as an assistant city manager.

Further review of Senate documents shows that Brown must have been a precocious manager, as he was 21 years old when he took the Edmond job in 1975, which he held for three years. In fact, the Edmond job appears to be the only emergency management experience Brown held until he was appointed FEMA's general counsel in February 2001 by his friend Joe Allbaugh, Bush's former national campaign manager. Brown spent the largest chunk of his career as commissioner of the International Arabian Horse Association, from 1991 to 2001.

During Brown's congressional review in June 2002 for the top FEMA job, the Senate Committee on Governmental Affairs asked Brown in written questions what experience "affirmatively qualifies you for this particular appointment." He responded: "During my early career in municipal government, I was actively involved in emergency services at the state and local government level, including police, fire, public works and public safety." Brown also signed an affidavit to the committee stating that information was "current, accurate and complete."

The panel chairman at that time, Sen. Joe Lieberman, D-Conn., appears to have considered Brown's Edmond job as critical experience. Lieberman's written statement from the 2002 hearing on Brown's nomination states: "What I think is particularly useful experience, early in his career, was assistant city manager in Edmond, with responsibility for police, fire and emergency services."

Misleading Congress under those circumstances can have repercussions, at least on paper, said Stefanie Lindquist an associate professor of political science and law at Vanderbilt University. "There are consequences, including potential criminal prosecution."