The bitter lessons of four years

Standing among the wreckage of two national disasters, it is no longer possible to deny the plain truth: Bush and his administration are unfit to wield power. 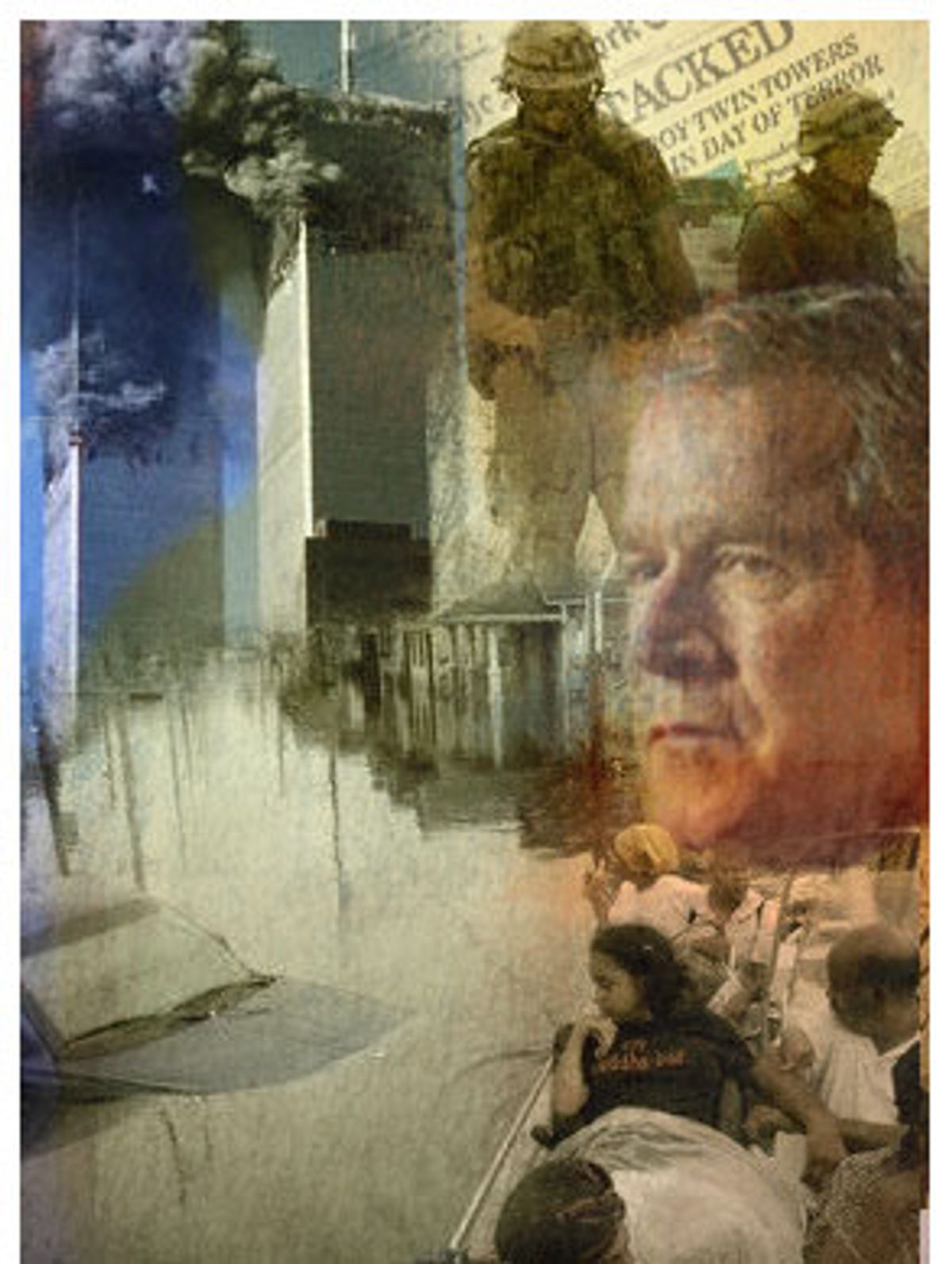 It would have been almost impossible to imagine, during the days and weeks that followed the terrorist attacks of Sept. 11, 2001, that we might someday look back on that depressing time with a tinge of nostalgia. For Americans, and especially for those of us who live in New York City, those autumn memories are filled with rage and horror, fire and smoke, loss and death; but they are also filled with a spirit of courage, community and real patriotism. United we stood, even behind a government of dubious legitimacy, because we knew that there was no other way to defend what we valued.

In a strange way, Sept. 11 -- despite all the instantaneous proclamations that things would never be the same -- represented a final moment of innocence.

Now catastrophe has befallen another American city, with horrors and losses that may surpass the toppling of the twin towers. And while many people in New Orleans have shown themselves to be brave, generous and decent, this season's disaster has instilled more dread than pride, more anger than unity. Why is the mood so different now? At every level, the vacuum of leadership was appalling, but especially among the national leaders to whom all Americans look at a time of catastrophic peril. As rising waters sank the city, summer vacations in Texas and Wyoming, and shoe shopping on Fifth Avenue, appeared to take priority over the suffering on the Gulf Coast.

Four years after 9/11, we know much more than we knew then about the arrogance, dishonesty, recklessness and incompetence of a national government that was never worthy of its power.

We saw how the White House squandered, all too quickly, the uplifting national response to 9/11. Within a few months, Karl Rove was heard telling the Republican National Committee exactly how he planned to betray the Democrats who had unanimously lined up behind President Bush in the aftermath of the attack by using the "war on terror" as a domestic political weapon.

Rove replayed his cynical maneuver at the GOP convention last year, when New York served as the backdrop for more patriotic posturing -- while the Republicans in the White House and Congress refused to provide adequate funding to protect New York from another, possibly even more devastating attack. Disproportionate millions went from the Department of Homeland Security to rural towns that will never be threatened, while city and state officials continue to lack the money and manpower to protect ports, power stations and chemical plants. The same neglectful and perverse priorities withdrew funding from the levees protecting New Orleans.

We learned how the Bush administration misled the nation into invading Iraq to suppress a nonexistent threat from "weapons of mass destruction," while assuring us that the war would be cheap, easy, and almost bloodless. The administration's predictions have proved uniformly false and its prescriptions entirely useless, costing thousands of Iraqi and American casualties and hundreds of billions of dollars. The resulting damage to our national prestige, among both allies and enemies, may well be irreparable. And after all the sorrow and destruction, Iraq may end up as a hellhole of warring ethnic and religious groups, a haven for Islamist terrorists, and an instrument of the mullah regime in Iran.

We found out why the president, the vice president, and their aides wanted no investigation of the circumstances leading to the 9/11 attacks. For nine months they'd ignored the warnings of danger, first from the former officials of the Clinton administration, then from White House national security officials, and finally from the CIA itself in the notorious presidential daily briefing of Aug. 6, 2001.

More recently, we have discovered how they failed to act on an ominous report from the Federal Emergency Management Agency, just weeks before 9/11, that pointed to the grave likelihood of a terrorist attack on New York City -- and of a deadly hurricane destroying New Orleans.

And we can have no doubt now, in the wake of Hurricane Katrina, that critical agencies of the United States government are staffed by patronage hacks unable to fulfill the most basic responsibilities of the modern state. The outstanding example, of course, is Michael D. Brown -- apparently known as "Brownie" to the admiring president -- the FEMA chief whose résumé contains nothing to recommend him to one of the most critical positions in government, although he had amply padded it with unearned honors and bogus titles. He claimed, for instance, to have worked as an assistant city manager, when he was actually a glorified intern. (The holder of a degree from an unaccredited law school, Brown's most significant lifetime work experience was as a "commissioner" for a horse show association, a position he departed involuntarily and left off his official biography.)

In his pathetic insufficiency, Brown evidently was not alone at FEMA. The deputies and acting deputies and various other high-ranking pork-choppers -- many of whom had landed at the agency from positions with the Bush-Cheney campaign -- showed up with no experience in the hard work of saving lives and restoring communities.

But the FEMA phonies stand as symbols of far broader trouble in the Bush administration. When the Republicans first took over in 2001, and for many months thereafter, they assured us that they were the "grown-ups," and that they were "in charge." After 9/11, their flacks returned to this self-congratulatory theme, boasting that all Americans felt more secure and protected by Bush than they would if Al Gore were in the Oval Office. Their standard of accountability is to award the nation's highest decoration for public service to George Tenet and Jerry Bremer, as if nobody had noticed their notorious failures.

Pretenders such as these cannot extricate us from a debilitating war, nor can they rebuild the nation they destroyed; they have no idea how to allocate resources against terrorism, nor how to prepare for the disasters that will surely come. What the Republicans in power can do is set up photo ops, repeat spin points, concoct hollow slogans about "compassionate conservatism," and sidestep responsibility by whining about "the blame game."

On this anniversary, surrounded by the wreckage of four years of disastrously bad government, we must confront a profoundly disturbing reality. The performance of George W. Bush as president has proved to be far worse than even his most alienated critics could have predicted. His administration is far less concerned with our security than with its own self-serving ideology and its petty abuses of office.

Four years ago, as we contemplated potential threats from the enemies of civilization, it was impossible to conceive of the vast damage that our own government would inflict upon America before those enemies could strike again. The danger from the perpetrators of 9/11 has not abated, and suddenly we know how vulnerable we remain -- because the federal officials who have sworn to defend us, beginning with the president, have neither the character nor the competence to fulfill that oath.

This story has been changed since it was originally published.