Who needs humans? Whether your goal is to sleep through the night or run a marathon, there's a gadget that can help. 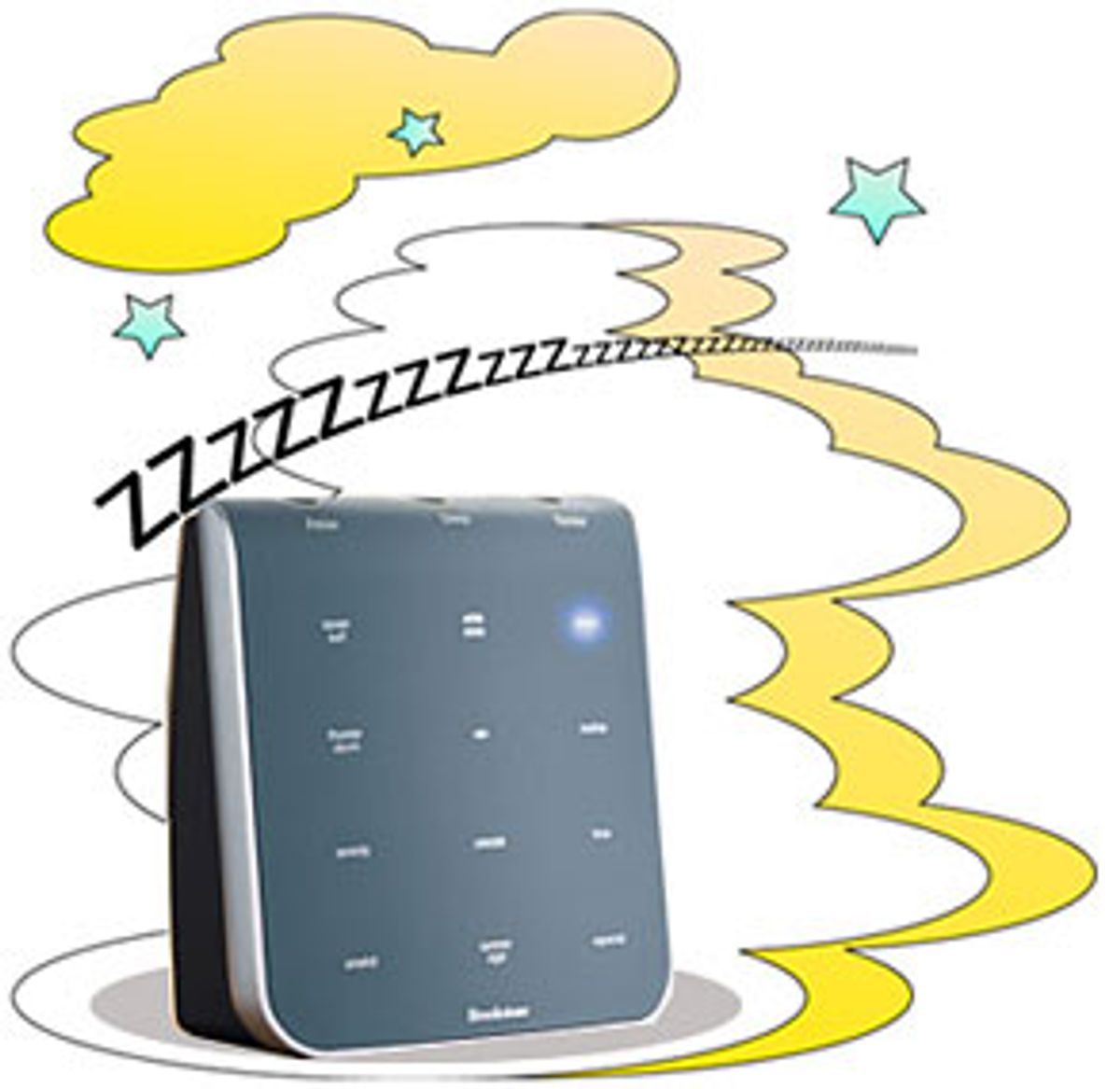 It's green. It's plastic. It's seven inches long. It brings me so much pleasure, I wouldn't go to bed without it.

It's my Tranquil Moments white-noise machine.

This wondrous little gizmo, officially called the Brookstone Tranquil Moments Sound Therapy System, was a Christmas gift from my brother. Indeed, for as long as I can remember, I'd always shushed anyone who dared make a peep in my apartment after 11 p.m. If my neighbors blared their stereo at 1 a.m., I'd march downstairs and firmly ask them to turn it down. I was, in short, a major party pooper.

While I made no apologies about these requests, I secretly wished that I could fall asleep even with AC/DC jamming outside my door. Finally, Tranquil Moments made my wish come true. It drowns out virtually any sound that dares creep into my room as I'm snoozing. So my roommate's watching "Trainspotting" for the eighth time and has the volume cranked so he can understand what the hell they're saying? ("You feckin' cunt!") No problem. When I'm visiting my cousin Cheryl and her 3-year-old daughter wakes up at 6 a.m. with "MAWWWW-MEEEEEEE!!" -- not a worry -- with a turn of the knob, it's instant peace.

I usually use the Tranquil Moment's standard "White Noise," option, but occasionally I tune in to one of the other five sounds, most of them from nature: "Woodlands," "Rain," "Ocean Tide," "Stream" and "Rainforest." Aside from the Stream, which makes me have to pee, and Rainforest, which leaves me with the frightening feeling that a parrot might land on my bed any minute -- each noise is soothing and pleasant. And they're all contained in this wee machine. It's light! It's portable! I can take it wherever I go! Certainly anywhere a pesky racket awaits.

So to all the drunken, sloppy lunatics who come pouring out of McSwiggan's Bar beneath my apartment at 3:30 every morning, I say, "Party on! I can't hear you."

I know all of this because of my Forerunner 201, a running watch with global positioning satellite technology. The Forerunner is a product by Garmin, a company that makes GPS products for pilots, boaters, hikers, cross-country skiers, bikers and runners -- anyone, in short, who has a need to move from Point A to Point B. According to Garmin's Web site, even the government has used Garmin technology, providing troops with handheld GPS units in the Gulf War.

Whether I'm running through the mountains of West Virginia or the streets of Paris, the Forerunner can map a course and lead me precisely to the finish. On the Garmin Web site, one enthusiast relates how he used his Forerunner to find his way back to JFK Airport during a snowstorm; his driver got lost, but because the intrepid Forerunner allows you to map waypoints along a given course, he made his flight on time.

The Forerunner has an oblong face that gives a readout of pace, time elapsed and calories -- but the feature that sets it apart from other GPS systems is the Virtual Training Partner. The VTP allows you to program a specific pace or finish goal, which is represented by a tiny figure running across the glowing face of the watch. And though the Forerunner has a large, easy-to-read display, you don't have to look at it to know how you're progressing: Your "partner" is programmed to beep at you if you go slower or faster than the programmed training pace. And this is sophisticated beep-speak. Feeling tired? An ascending tone signals that you're running too slow. (Hey, Lazy, speed up!) Feeling invincible? A descending tone warns you that you're over speed, and signals you to take a break. For me, the prompt is usually to slow down; I get a lot of pleasure -- too much, some might say -- from trouncing my tiny training partner.

I have a number of favorite courses around the city, but the best is something my boyfriend lovingly calls my "rat run" -- because there is something undeniably Skinnerian in the way I run this 4.17-mile loop exactly the same way, prompted by beeping, rewarded at the end with my detailed pace-per-mile readout.

Tomorrow I can be found again, ponytail flying, Forerunner beeping, running as if the devil himself were on my heels. People often ask me what I think about when I run. The answer is, usually nothing. Except lately, I have been thinking about something ... Garmin has a new product, you see. The Forerunner 301: all the features of the 201, but with a heart rate monitor too.