This Victorian Gothic love letter from the Land of the Undead brims with life. 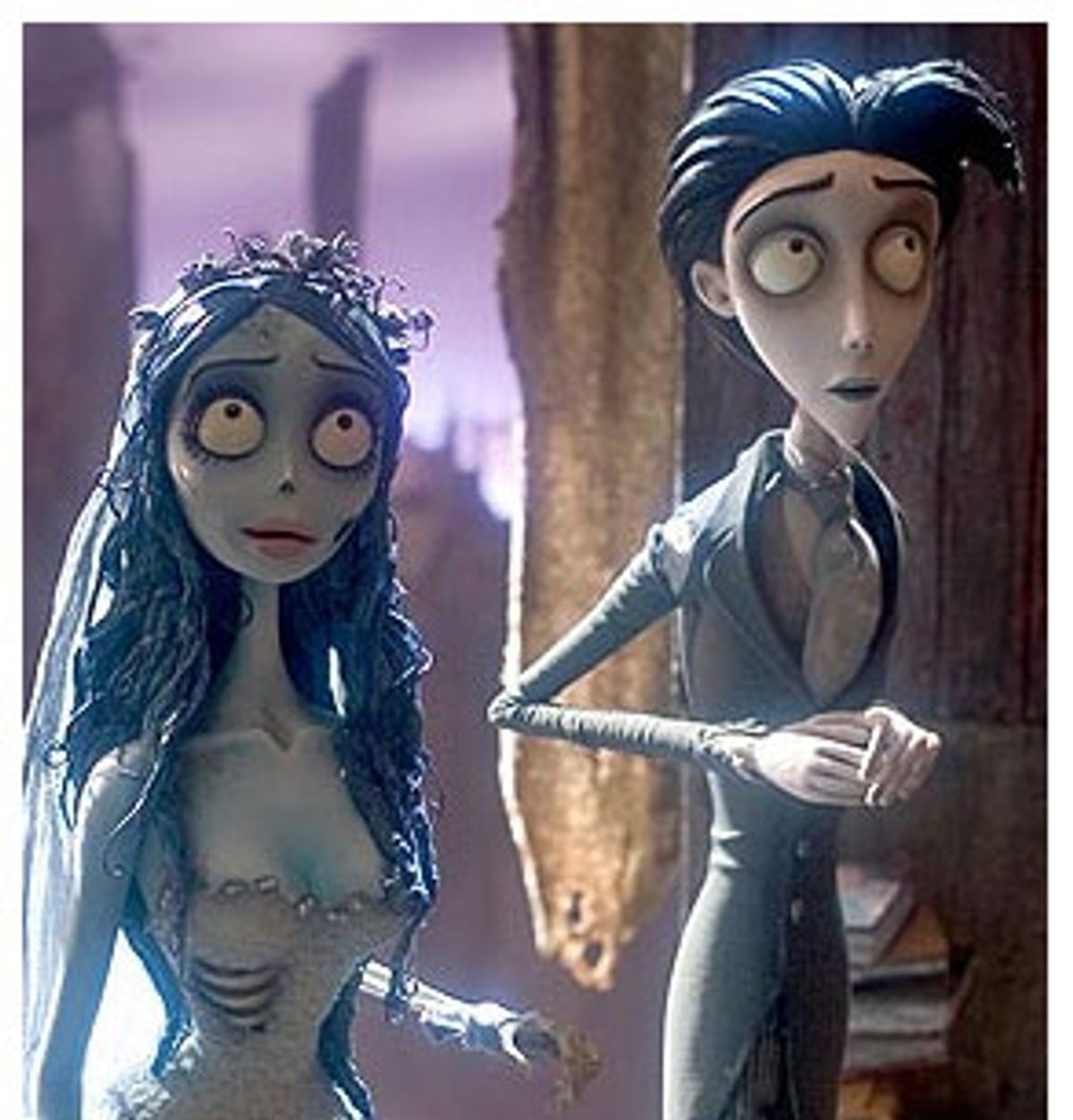 In Michael Almereyda's funny, ardent and moving vampire picture, "Nadja," the title character, a downtown-Manhattan descendant of Count Dracula's, sums up the exquisite suffering of her lot: "Life is full of pain. But the pain I feel is the pain of fleeting joy."

The visual and narrative beauty of "Tim Burton's Corpse Bride" captures the essence of that line -- it hurts a little to watch the movie, not just because it's so deeply touching but because the medium itself is calling out to us from a lost world. Stop-motion animation of the sort Burton uses here -- and that he and director Henry Selick also used in the glorious 1993 "The Nightmare Before Christmas" -- has been virtually wiped off the filmmaking landscape in favor of CGI. So while the story that's told in "Corpse Bride" -- a Victorian Gothic romance adapted from a Russian folktale -- is affecting in itself, the vitality and beauty of the textures and movement on-screen have a special poignancy. "Corpse Bride" isn't the sort of thing you see every day. It's in touch with the real world, yet out of step with it. This is filmmaking straight from the land of the undead.

"Corpse Bride," which Burton co-directed with Mike Johnson, begins with a wedding gone wrong. Canned-fish magnates Nell and William Van Dort (their voices belong to Tracey Ullman and Paul Whitehouse) have money but no class; and Maudeline and Finis Everglot (Joanna Lumley and Albert Finney) have aristocratic roots but no dough. The families decide to merge by arranging a marriage between their respective children, Victor (Johnny Depp) and Victoria (Emily Watson), who, as of the night before the wedding, have never even met. They fall in love, of course, at first sight. But by a curious turn of events, Victor accidentally stumbles into the world of Emily, the Corpse Bride (Helena Bonham Carter), who was killed by her intended on her wedding day. Her heart, she notes, is capable of being broken even though it has stopped beating. And she desperately wants Victor to be her husband, even though he's betrothed to someone else.

So Emily conveys Victor to the Land of the Dead, an underground world rendered in vivid jellybean colors, a far cry from the muted gray Victorian reality Victor knows. But that world is home to Victor, and he aches to get back to it. "Corpse Bride" was written by John August, Caroline Thompson and Pamela Pettler, and as a piece of storytelling, it holds up admirably against any live-action script. The story is beautifully worked out, and it gets most of its momentum from the feelings of the characters. There's Victor, charming but hapless at first, whose strengths are ultimately magnified by his compassion for a person in pain; the steady and true Victoria, left to believe that Victor has willingly abandoned her for someone else; and, most affecting of all, the fragile but vital Emily, who sees Victor as her last chance at happiness -- the only other option for her is to face the rest of eternity alone.

The world of "Corpse Bride" is so vivid that it's hard to believe these are puppets we're talking about. Victor, with his saucer eyes and brilliantined forelock, looks more like the human Johnny Depp than Depp himself did in "Charlie and the Chocolate Factory." And Emily, perched on matchstick ballerina legs (on one of them, her flesh has rotted away and you can see an exposed flash of bone, a disconcertingly erotic visual), is a specter of tragic love wrapped in tattered wedding clothes. Her nose is a pert inverted "V"; her lips have a sensual pout that suggests not even death can fully destroy the human sex drive.

Emily's world is populated by singing, dancing skeletons (they perform several songs composed by longtime Burton collaborator Danny Elfman, including a rousing Gilbert and Sullivan-style ensemble number); by beings who used to be soldiers or waiters or bakers in life and just can't break the habit even now that they're dead (some of these skills come in handy when it's time to make the couple's wedding cake, a towering creation festooned with fondant skulls and femurs); and by tiny, mischievous skeleton kiddies (they tiptoe through the movie, giggling, in their little Victorian frocks and sailor outfits). There's an ick-green talking maggot who takes after Peter Lorre (his voice actually belongs to Enn Reitel) and a dog named Scraps, Victor's beloved, deceased childhood pet -- Emily presents him to Victor as a wedding present. He's now a butt-wriggling assemblage of bones, but his essential spirit of doggyness is undiminished.

It's a tossup as to what's more appealing, the rainbow-hued Land of the Dead, beneath the Earth's surface, or the grayish Land of the Living up above. There's definitely more fun going on down below, with lots of live dead entertainment and an eternally open bar. (As a wise old dead elder, voiced by Michael Gough, observes, "Why go up there when people are dying to get down here?")

But the colors in the Land of the Living are more subtly beautiful: There are endless variations of grays, and Burton (along with his clearly hardworking technical team) uses the whole palette, tinting this allegedly boring color with pinks and blues and violets. The delicacy of these creamy tones suits the passionate but tender nature of the story, and their earthbound beauty fits the movie's realistically romantic theme: Love isn't ownership, and it's no good unless it's freely given. "Tim Burton's Corpse Bride" is a lush, modern valentine to old-fashioned sentiment, and to old-fashioned moviemaking, too. When Victor sits down at a grand piano, we see that it features a brass plate inscribed with "Harryhausen" in majestic letters, a tribute to special-effects genius Ray Harryhausen, whose work is so lovingly referenced here. Harryhausen is now 85, and although today's kids may not know who he is, many of yesterday's kids do, from Saturday-afternoon movie staples like "Jason and the Argonauts" and "The Golden Voyage of Sinbad." With "Corpse Bride," Burton and Johnson pay tribute to the people, and the techniques, that have inspired them. Their movie is a living love letter, not a memento mori.