In this breezy geopolitical satire, Nicolas Cage plays an old-fashioned American salesman -- of Uzis and AK-47s. 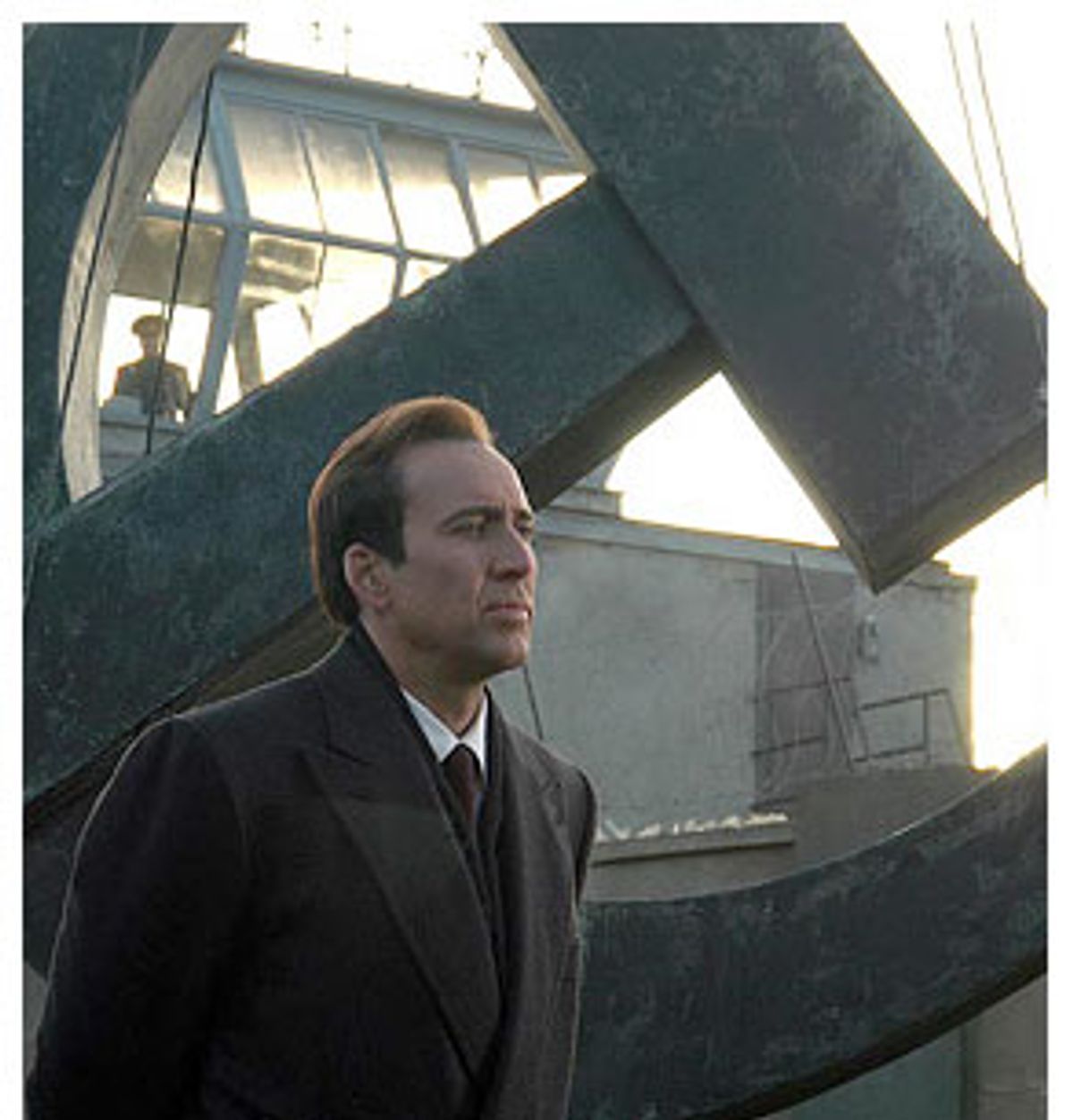 If only more modern romantic comedies showed as light a touch as Andrew Niccol's "Lord of War" does -- particularly since "Lord of War" isn't a romantic comedy at all, but a geopolitical satire about a nice Ukrainian boy from Brooklyn, N.Y., Yuri Orlov (Nicolas Cage), who builds an outrageously successful gunrunning business from the ground up.

Niccol, who also wrote the script, is straightforward about his motives here: This is a movie about a guy who shuffles billions of dollars' worth of military weapons from here to there, outfitting any army or warlord who'll pay him, regardless of how, or against whom, those weapons will be used. ("I sold to every army but the Salvation Army," Yuri explains in the voice-over narration that encompasses the movie like a geodesic dome, although he makes it clear he never sold to Osama bin Laden -- "not on any moral grounds. Back then he was always bouncing checks.")

"Lord of War" includes sequences in which children are gunned down by firing squads (much of the violence is off-screen, but Niccol always makes clear what's happening) and a few instances of smiling, unself-conscious third-world kids waving stumps around where their arms should be. And even though Niccol sometimes puts unnecessary homilies in the mouths of his characters, he mostly pulls off the tricky feat of being direct and breezy at the same time. "Lord of War" skims along like a dance routine. Political morality doesn't usually get such fleet choreography in the movies.

Niccol opens the movie by showing us a carpet of spent bullet casings (it looks like an abstract bronze collage of remarkable beauty), and follows up with a cheery step-by-step tutorial on the life of a bullet, tracing its journey from assembly line to consumer -- and then victim. It's the sort of opening that jolts you into a state of attentive curiosity even as it sets off warning bells; it's an artful and arch opening, but it could also be the mark of a movie that's too cool, slick and clever for its own good.

So Niccol shifts gears quickly, sending us back to '80s Brooklyn, as Yuri explains in voice-over how he launched his career. He was born in Ukraine, but his parents fled to America when he and his brother, Vitaly (Jared Leto), were just kids. Mr. and Mrs. Orlov open a kosher restaurant in Brighton Beach, posing as Jews even though they're really Roman Catholic: "I like it," Yuri's father says by way of explanation, just before he waves off the plate of clams his wife is trying to get him to eat. "I like the hat." But Yuri knows the restaurant life isn't for him, not least because Vitaly, the cook, makes a lousy pot of borscht. And after seeing a shootout between local Russian mobsters, inspiration strikes: He asks his dad if he can attend services with him the following Saturday, and there, outside the synagogue, he makes the business contact that will net him his first Uzi for resale. (It folds up quite nicely into an '80s camcorder case the size of a giant lunchbox.)

From there, Yuri expands the business, luring Vitaly into it, too, although he quickly learns that his ruminative, softhearted kid brother doesn't have the guts for it. He builds his client base gradually, starting with the locals and moving into the Middle East and Africa, where he gets on the good side of blood-crazed Liberian dictator Andre Baptiste (a thinly disguised version of Charles Taylor, played with snakelike elegance by the wonderful actor Eamonn Walker). Without even blinking, Yuri supplies the necessary munitions for the massacre of innocents -- or of anyone, really. The recurring sick joke of the movie is that Yuri never lets his conscience get in the way, even though, as Cage plays him, we know he has one. We're not getting the autopilot Cage here, but the Cage who actually has a sense of the movie around him. As Cage plays him, Yuri is just a high-toned traveling salesman, charismatic, reprehensible and often exhausted. When Yuri is confronted by someone close to him who has only recently learned what he does for a living, he offers the plaintive defense: "It's not about the money. I'm good at it." And the twisted thing is, he's right.

Yuri could have been a perfectly nice guy if only he hadn't pursued this arms thing. He's ruthless when he's going up against a rival arms dealer -- a stiff, old-guard type played by Ian Holm, who rightly views Yuri as an upstart -- but flinches at the opportunity to eliminate the competition. He takes pride in the fact that, up to a certain point, he has sold guns but never actually fired one. He tenderly takes a toy cowboy pistol away from his sleeping son -- whom he's sired with his trophy wife, played by Bridget Moynahan -- and tosses it into the garbage with barely disguised disgust. And while he takes great pleasure in outfoxing the Interpol agent who's hot to capture him (Ethan Hawke), he can't deny that he likes the guy, too. Yuri is a Rotary Club regular, the kind of old-fashioned American capitalist you'd like to do business with if you were buying sheet metal or prefab garden sheds. And how, really, are guns so different?

Niccol -- director of "Gattaca" and "S1m0ne," but perhaps best known as the writer of "The Truman Show" -- wrote the character of Yuri as a composite of five real-life arms dealers. And obviously, he has a point to make, wanting to call attention not just to the vast number of weapons sold to other countries by the United States (via legitimate means or otherwise) but to the indiscriminate ways in which they're sold. Sometimes Niccol resorts to preaching, and that's a drag, considering his points are made so much better when they zing at us from unexpected corners. (At one point Holm has a line about how bullets change governments more surely than votes do, and the baldness of the line hits you like a shovel on the forehead.)

But many of the better points Niccol makes -- among them, that legitimate government agencies need slimeballs like Yuri to do their dirty work so they can at least maintain the appearance of keeping their hands clean -- emerge with far less strain and effort. Niccol isn't exactly subtle, but there's a lightness to his approach that underscores, rather than diminishes, the gravity of the material. (The movie's tone is similar to that of Gregor Jordan's prissily dismissed "Buffalo Soldiers," another picture about the disreputable pleasures of free enterprise.)

At one point we see a plane being landed on a strip of dirt road in Sierra Leone. Yuri refers to it as a highway, which, by local standards, it is. Pedestrians and the occasional cow -- there are no vehicles save a few carts and bicycles -- scatter in terror. As the plane skitters forward, we see through the windshield, perfectly centered so we can't possibly miss her, a baby playing in the road. The plane moves closer; the baby, cheerful and oblivious, continues to play. The obviousness of the moment is a kind of perfection: This isn't cheap, "War of the Worlds"-style child endangerment designed to get a rise out of the audience; it's cheap, "War of the Worlds"-style child endangerment designed to make us laugh at how susceptible we are. (The baby is whisked away by her mother at the last possible instant.)

And yet Niccol never turns away from the flat reality that kids do die -- or lose limbs -- as a direct result of Yuri's reckless endangerment. And Yuri is perfectly happy to supply those kids with the means to kill, too. At one point he sings the praises of the AK-47: "It's so easy, even a child can use it -- and they do!"

I suspect some critics and moviegoers will accuse "Lord of War" of being smug and heavy-handed. But I think Niccol has complete control over both the message and the means: The movie's morality is part of the very surface texture of the picture, like brushstrokes on a canvas. "Lord of War" changes in tone gradually toward the end, as the consequences of what Yuri has done, and the way he has lived his life, begin to close in on him. Niccol navigates that shift skillfully. He doesn't punish us for the enjoyment he's just given us, but he doesn't let us walk away blithely, either. The end of "Lord of War" left me feeling both exhilarated and weirdly melancholic at the same time -- and, of course, totally disheartened about my country, which is pretty much a permanent state of affairs for many of us these days.

"Lord of War" isn't so much serious entertainment as entertaining seriousness. Niccol brings the movie in, as in that emergency dirt-road landing, as if he's piloting some huge, unwieldy flying machine. He lands it with just a hint of a shudder.