While the president and the press play the blame game, our band of holdouts help clean the streets of the Quarter. 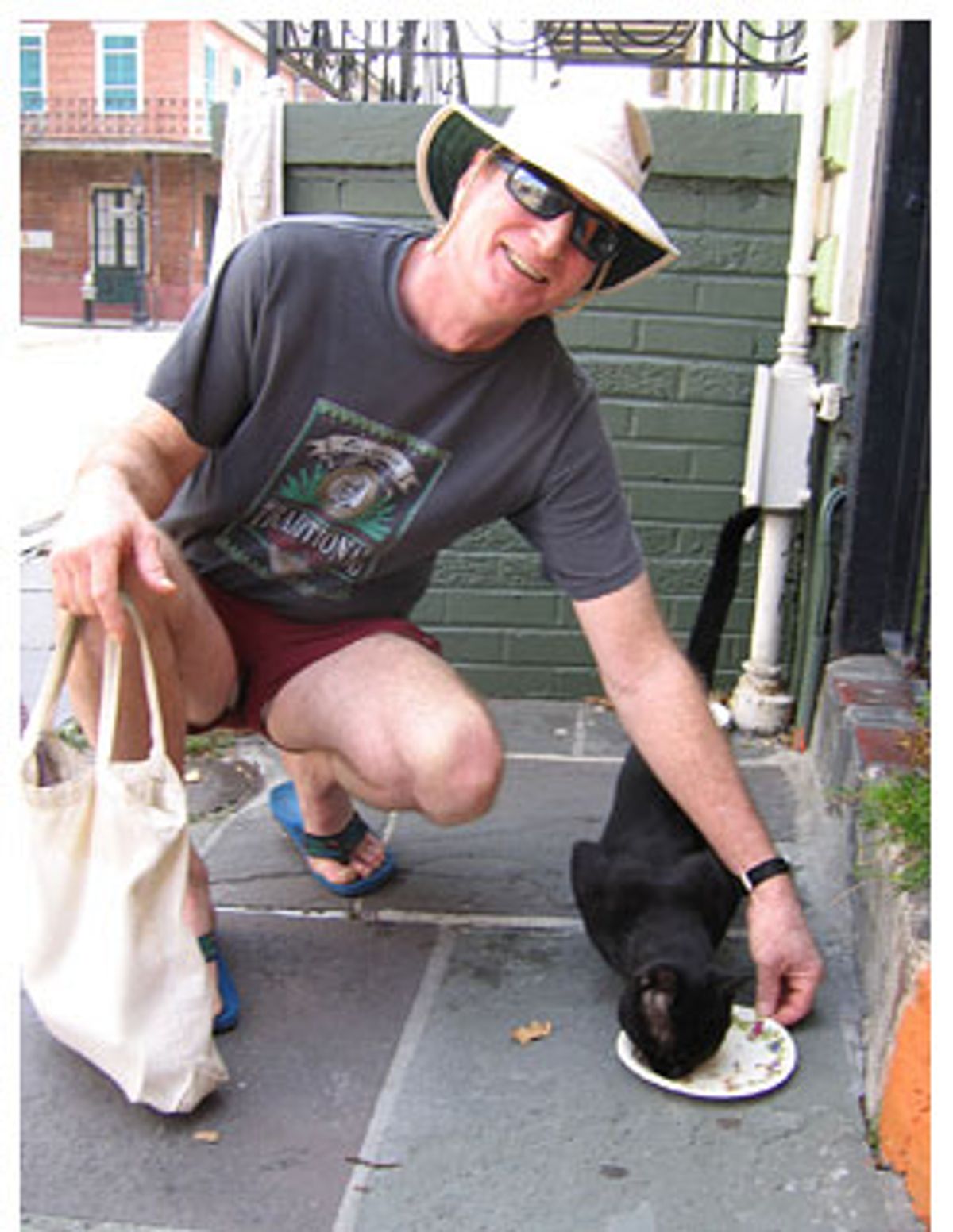 I've learned to make flies alight on my fingertips and suck the blood from mosquitoes. Now they tell me the city may have its lights again this weekend, and I wonder if I'll remember all I've learned in the dark. I'm not sure I'm ready to forget.

I went to rescue a friend's cat this morning, no doubt having its own battle with the elements. After the fourth voicemail pleading and begging for her cat's life, I got a 40-foot extension ladder from an antiques dealer who was having his morning Miller down at Johnny White's (now officially the only New Orleans bar never to lock its doors), hauled it up Orleans Avenue, climbed on top of her garage, pulled the ladder up, climbed back down it into her garden and opened her kitchen shutter doors so Bingles could jump out of her little cat door to freedom.

This is my third such rescue. Word has it the SPCA has been overwhelmed and simply given up. Of course, there are all sorts of rumors floating through this media-blacked-out neighborhood, like a bunch of debris. I myself cannot understand people who leave town right before a Category 5 because their house may undergo massive destruction and flooding, but leave Bingles locked up in the kitchen with a can of Meow Mix and a bowl of water.

As I was walking back to the commune, a van pulled up alongside me, then screeched to a halt. A petite blond reporter poked her head out and asked if I was a resident. She told me President Bush had accepted responsibility for the mismanagement of the hurricane response and asked if I would care to respond to him. I said sure, You got him in the back seat?

I was disappointed to see only an ABC News camera crew roll out of the van and cluster around me. I mumbled stuff about how we haven't had much time to point fingers around here. If Bush did in fact accept responsibility, it would seem to me that he's won the so-called blame game because he'd be the first politician I've heard of who's taken any responsibility for anything that's gone wrong around here. From the "Reverend" Coco, who even now drinks from a brown bag and sleeps in a box down the street -- he calls it his "Off-White House" -- to the White House, far as we can tell everyone's been pointing their fingers left, right, up, down and all around.

So we decided the buck stops here. We need progress, baby. If at this point everyone were to stop screaming and start helping, well, I hope the outcome would be obvious. Let the anger roll later. Other regions not as fortunate as our neighborhood still need plenty in the way of relief.

As for us, we're stuck here, so we start here. Last week, the 10 of us holed up together in the commune formed an organization to start cleaning the Quarter: New Orleanians Eliminating Negative Debris (NO END). Our motto is "Less Weeping, More Sweeping." In keeping with our motto, we constructed a sign and hung it in front of St. Anthony's Garden behind the St. Louis Cathedral. In the center of the garden, smack-dab in the center of the French Quarter, stands a 20-foot-high statue of Jesus with his arms stretched high and wide -- a city icon known lovingly as "Touchdown Jesus." The sign, now locally (in)famous, says, "Jesus Swept."

The plan was also to tape a broom into one of his hands. Armed only with other brooms, that plan was promptly abandoned upon encountering a couple dozen rangers from the 82nd Airborne, red berets and all, who were chopping up the massive elms that had fallen perfectly around Jesus during the storm and had only knocked one of his pinky fingers off.

Though Jesus himself has done no manual labor yet that we could verify, we hauled fallen trees and swept debris from Jackson Square last week, then cleaned our own blocks and a good portion of Bourbon Street. I even shoveled up a 40-foot-wide whole brick wall that had fallen across Burgundy Street so that cops and military and ambulances could roll through. It was just something to do.

But today clean-up crews rolled in from Atlanta, and the Navajo Scouts have polished off Jackson Square, so we've moved on to cat rescue.

The city is slowly regaining its footing after the pummeling Katrina gave it. Some downtown hotels and government buildings already have power restored. My girlfriend Ellen and I sat on the roof of our commune at midnight last night. The Mississippi stretched out before us, no city lights yet shivering upon its surface, the French Quarter roofs around us a mess of dark shards pointing silver into the almost full moonlight. Beyond the Quarter, the northern half of the city was erased in stars, while the southern sky was erased in the lavender haze of downtown lights.

Rumor has it that about 60 of us residents remain here in the Quarter. But our evacuated fellow citizens will soon follow the approaching electricity and lights like the moths that now flutter and drown in the wax around our candles. The nationwide diaspora of New Orleanians will collapse upon us as quickly as they feared their foundations would collapse from the storm. But the foundations, bricks and people, remain.

Larry is one of them, one of the 60 faces that have defined this neighborhood over the last two weeks. I finally got his name after he let me borrow his extension ladder to rescue Bingles this morning. He's 81 and has lived in this neighborhood for 40 years -- and, as the orange spraypaint on the street in front of his house stipulates, he is the only one left on his block.

He was sitting in a wicker chair by his doorstep, breakfasting on a cheese omelet MRE. I thanked him for the ladder.

"Don't worry, " he said, laughing off a rumor that the remaining residents could be forced out. "I'll poke their eyes out with this cane if they come for me."

Joshua Clark is the editor of Light of New Orleans Publishing.