Dressed not to be killed

The Colombian "Armani of bulletproof clothing," who makes custom evening wear for Hugo Chavez and shoots his employees to show off his products, has just opened a new office in Mexico City. His business is booming. 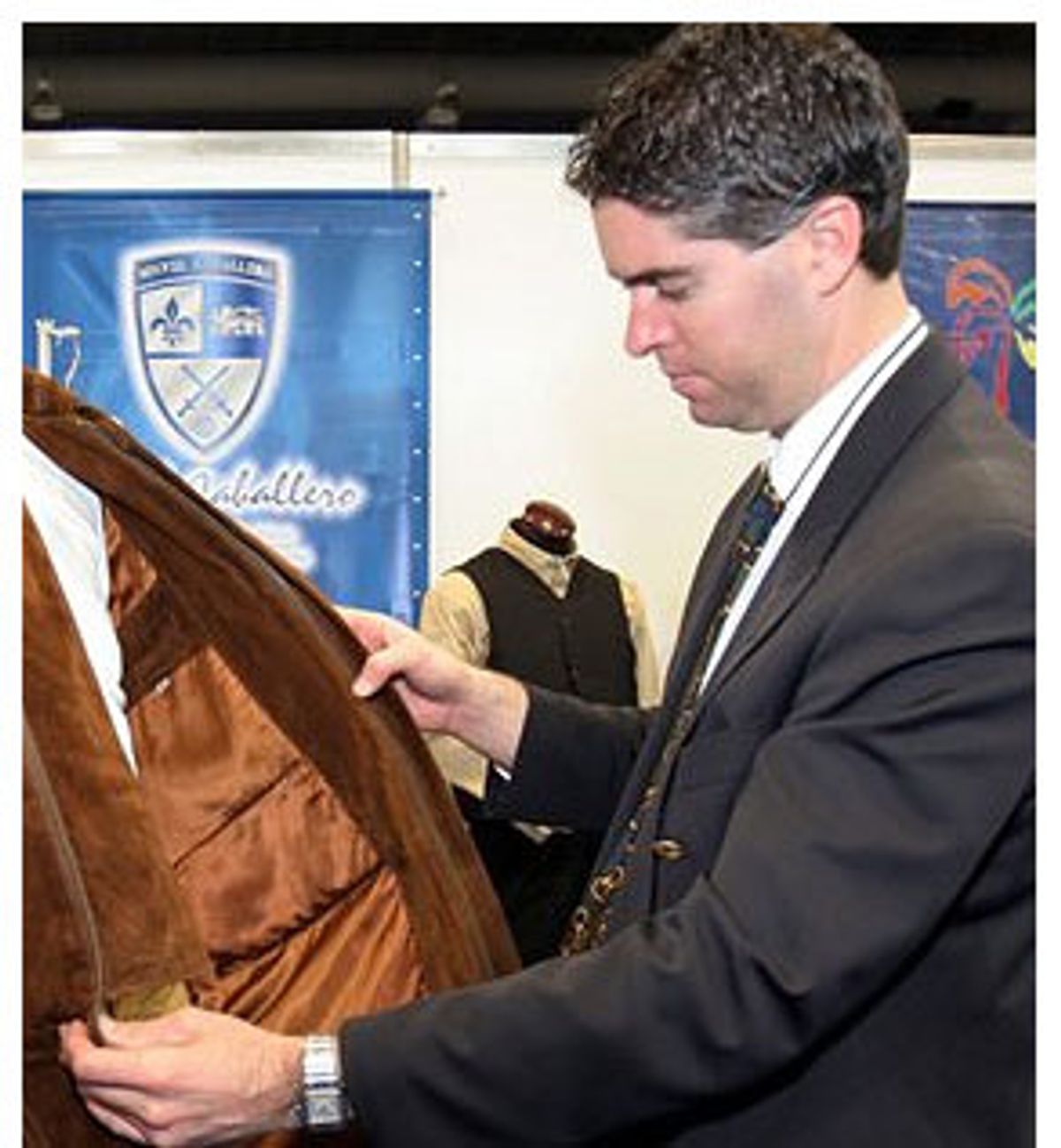 It is hard to blame Venezuelan President Hugo Chavez for believing someone is out to get him and for taking extraordinary steps to protect himself these days.

The United States government, after all, is widely believed to have supported a coup plot against him in 2002. And then there's Pat Robertson's recent Tourette's-like recommendation that the White House save us some cash and just "take out" the South American leader.

With all that love coming his way, it is no surprise Chavez routinely dons protective clothing. But for a president with an outsize ego and an eye for the ladies, style is something not even the embattled Chavez could sacrifice.

Call in Miguel Caballero, the self-described "Armani of bulletproof clothing," who produces "high-security fashion" in an unassuming shop tucked almost anonymously into a middle-class suburb of Bogotá, Colombia.

The 38-year-old Caballero is only too happy to help. He recently stitched together a wine-red guayabera for Chavez, lined with a layer of woven aramid fibers strong enough to stop a .9 mm slug. The fancy tropical shirt was just like the white one Caballero produced for Colombian President Alvaro Uribe, another leader with good reason to watch his back: The Revolutionary Armed Forces of Colombia tried to assassinate him three times in 2002 alone.

Those aramid fibers -- weaves of specially treated synthetic thread -- are the new industry standard. The fibers are in vogue now that protective material like Kevlar has fallen out of favor because of its weight and performance under fire. And Caballero has emerged as a specialist in a crowded protective-gear field for his imaginative use of the lightweight materials.

But technical details and somber reflections on dangerous times in Latin America are not what has Caballero engaged. As we talk in a small conference room in his Bogotá office, a smile pulls across Caballero's face: Right now he's relishing another opportunity to shoot his lawyer.

It should be the fifth time Caballero has aimed a .38 caliber gun at his lawyer's belly and pulled the trigger. But this time the lawyer is uncooperative. He peeks into Caballero's office and, laughing, says he's late for an appointment. The boss won't get his jollies this time.

"No problem. I can find someone else to shoot today. Is there someone new here who hasn't been shot?" Caballero calls out into the hallway. An assistant scurries up the stairs to rustle up another victim.

By our standards in the United States -- where workplace shootings are criminal acts -- this is a horrific way to win points from the boss. But we're in Latin America, where labor standards are more like meek bureaucratic suggestions. Besides, runaway crime requires tough countermeasures, and this is Caballero's way of maintaining employees' confidence that the jackets, shirts and vests they make really do stop bullets. The 38-year-old Caballero has fired at all 80 of the employees of his security firm, some of them multiple times, in his company's 12-year history.

"I'm the only man I know who can say he's shot his lawyer four times and got away with it," Caballero says, calmly loading the gun for another demonstration of the strength of his antiballistic textiles. He turns to me and suggests I don one of his trademark leather jackets and face the barrel of his gun. The jackets used in his demonstrations have a 100 percent success rate. But this is no comfort. I decline the invitation. I tell Caballero that, no offense, this story is not worth taking a bullet for.

Caballero hardly needs to prove to anyone else the worth of his armored clothing. He is basking in international regard for his lines of fashionable protective clothing for executives and politicians who want to look good, yet feel confident they'll survive an armed assault. Apart from the guayabera purchase, Caballero said the feisty Venezuelan leader recently bought a fortified leather jacket for Iran's outgoing President Mohammed Hatami. It was a fitting gift, given that Chavez and the Iranian leader spent a couple of days this summer touring Venezuela, gleefully launching ideological barbs at U.S. President George W. Bush.

But Caballero is strictly business. He's publicly apolitical, willing to sell his expensive gear to just about anyone. (Off-limits are narcos: "You know who they are, so you tell them no right from the start.")

U.S. diplomats at the embassy in Bogotá have purchased more than a dozen Caballero jackets, the designer boasts. And throughout Latin America, military officers wear his armored uniforms and mine-resistant boots that miraculously displace the force of an explosion. And bomb squads employ his shrapnel-proof blankets.

The company now books over $3 million a year in sales, selling stab-proof and bulletproof T-shirts, denim and leather jackets, and other items that cost between $200 and $2,000.

The bad times in Latin America have Caballero expanding. He recently opened shop in Mexico, in what could be his biggest customer base yet. In Mexico City, fear of being kidnapped, assaulted or getting caught in the middle of random drug violence hangs in the air as thickly as the city's infamous smog. The company has branch offices in Caracas, Venezuela; Quito, Ecuador; and Madrid, Spain, but together with Colombia, Mexico is one of the most violent countries in Latin America. Caballero figures there's a kidnapping in Mexico every three hours. Officials denied it, but several years ago even the FBI station chief in Mexico was kidnapped briefly after emerging from the U.S. embassy and hailing one of Mexico City's ubiquitous green-and-white Volkswagen Beetle cabs. In 2004, kidnappings surpassed 3,000, according to crime analysts. And that's just the reported abductions; only one in 10 is called in to police. Large corporations in Mexico spend millions on security. Security firms each year sell about $1 billion worth of home alarms, bulletproof vests, bodyguard services and armored vehicles.

Fear has grown as well because of drug-gang violence. This year, from tourist-laden beach resorts to industrialized cities along the U.S.-Mexico border, an estimated 800 people have been murdered, and dozens more injured or kidnapped.

"There has been a different mentality among businesspeople here in Mexico than in Colombia," says Mauricio Chazaro, who represents Caballero in Mexico and tends to a closely guarded list of clients that includes business leaders, government officials and public security personnel. "Unlike Colombia, people here were not accustomed to having to think about wearing protective clothing. But as things have gotten out of control here, they're realizing that it's not enough to drive around in a protected car. The car can only protect you while you're in it. Businesspeople here are now looking beyond the car."

But fear and loathing doesn't mean having to wear bulky body armor, Caballero says. As he demonstrates lightweight suits and dress shirts, he muses about future plans: A line of bulletproof women's wear, from evening gowns to blouses. Then there's the super-strong matador's outfit. "There's a niche market for that, I'm sure," Caballero says, wagging his finger at no one in particular. He's just proud of himself for thinking of that.

Oddly, the only item that didn't sell well was the now-discontinued knife-proof underwear. His "big house" briefs and T-shirts were meant for those special inmates police may have wanted to keep alive, or the VIP (very important prisoner) most likely to be preyed upon by fellow prisoners.

"I don't try to compete with the 500 companies around the world who make bulletproof jackets," Caballero says. "We do custom work for individual needs. In Latin America that means considering weather and the types of occasions during which a client might need protection ... We just got a call from a man in Ecuador who asked us to make a protective bed sheet."

"We also made a priest's vestment and then protected his Bible as well," he adds. And not a moment too soon: Last month the Revolutionary Armed Forces of Colombia (FARC) "apologized" for assassinating three priests in rural parishes.

Caballero has a degree in business administration. After college he sold everything from candles to insurance. In 1993 he settled on the idea that personal protection need not be ugly. He started with $10 in cash and a leather jacket and then began layering thin slices of coated materials like Twaron, from the Dutch company Teijin Twaron. He found the fibers could be incorporated into denim, cotton, wool and synthetic fabrics. The first sales success was a line of thin vests that weighed three pounds and fit comfortably under a shirt.

"When we started we saw that security guards had vests, but kept them in the trunk of the car," says Caballero, himself a survivor of two kidnap attempts. "That does you no good in an emergency."

Back in his shop, Caballero is ready for fun with a gun. This time the subject is his own bodyguard, a broad-shouldered former Bogotá cop named David Guerra who just joined the company. Caballero levels the gun 3 feet away from Guerra's midriff. Sewing machines on either side of the shooting range abruptly stop. Even seasoned employees, who've already faced Caballero's pistol, pause to witness. Caballero squeezes the trigger. The oversize earmuffs can't block out a distinctive "bam!" Guerra recoils, but does not fall. The stares of his co-workers hold firm until he pats his belly and affirms that all is well. The sewing machines whir back into action. Another employee successfully baptized.

"It felt like someone punched me in the stomach," Guerra says cavalierly. Yet it takes a bit for the flush of anxiety to fade from his face. "I was not scared," he insists. "The others told me these jackets have never failed. I'm glad I'll be wearing one of these on the job."