Watching this airplane thriller is like being stuck on a transatlantic flight. 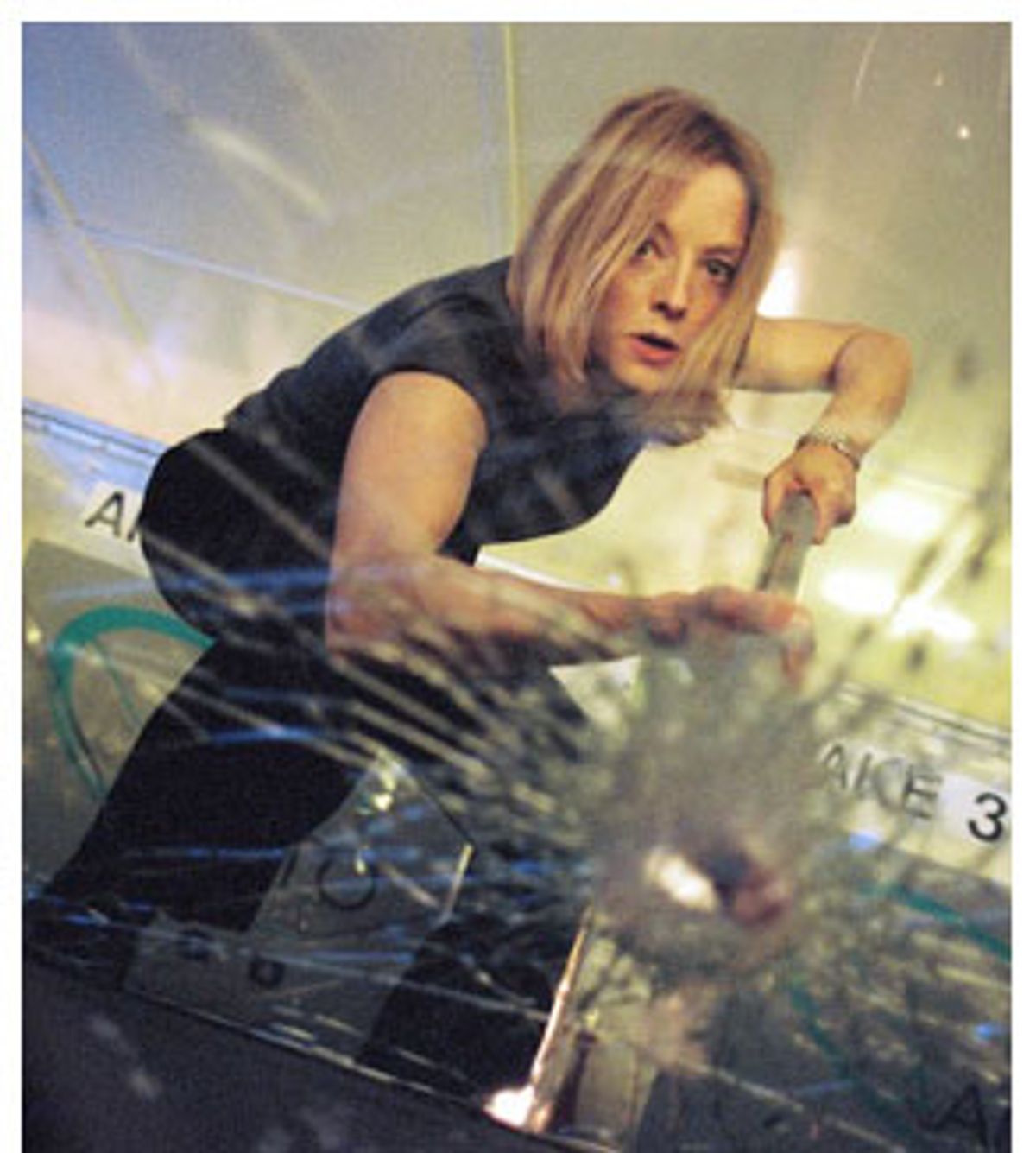 The inherent problem with thrillers set on planes is that sooner or later, there's no place to go but down. Wes Craven managed to glide past any potential difficulties in "Red Eye," a finely chiseled little picture that may not have cost a fortune to make, but was so much fun that you left the theater feeling like a million bucks.

"Flightplan," the latest Jodie Foster vehicle (the director is Robert Schwentke), has a costlier glow, and you get the sense the writers, Peter A. Dowling and Billy Ray (the latter of whom wrote "Shattered Glass"), took great pains to shellac the story -- the basic premise of which is lifted from Hitchcock's "The Lady Vanishes" -- with a few coats of seriousness. Foster plays a woman who's grief-stricken over her husband's recent suicide. The couple had been living and working in Berlin -- we don't know what he did for a living before he jumped off the roof of their building, but she's a propulsion engineer, so she sure knows a lot about airplanes. She wants to bring her husband's body back to the States for burial, and she seems to want to start anew as well. So she and her understandably bummed-out 6-year-old daughter (played by Marlene Lawston) board a plane for the States. Not long after takeoff, the little girl disappears, and her mother begins a frantic search for her, although admittedly, there are relatively few places for her to look.

Foster begins by asking the flight attendants -- among them the preternaturally bored-looking Erika Christensen -- for help: They just glare at her with a smug "Get back in your seat" vibe, and then roll their eyes at one another as if to say, "Who is this kook?" Fellow passengers can't help, either: When she asks Peter Sarsgaard if he's seen a little tyke run by, about yea high, he looks at her as if he were a quizzical farmer chewing on a piece of straw as he wonders if it's going to rain and says, "Sure didn't."

No one is willing to lift a finger to help poor Foster, not even the pilot, Sean Bean, possibly the first tree trunk ever licensed to fly a plane. And here we begin to wonder, just as the filmmaker and writers and nearly every character on this dad-busted tin can want us to: Has she merely imagined that she has a child at all?

If you want the answer to that question, you'll have to buckle up and see "Flightplan" yourself, because me, I'm like Sarsgaard with that piece of straw: Not tellin'. "Flightplan" purports to deal with some significant topical issues: In-flight, several dark-skinned people seemingly of Middle Eastern origin have rude accusations flung at them. And for maybe 30 seconds, you watch the picture and think to yourself, "This might really work itself out cleverly!" -- it's so stultifying that you just can't believe you're going to be put through the paces for nothing.

Is the resolution reasonably plausible, or at least worked out in an interesting fashion, you may ask? Again, I defer to my farmer friend Sarsgaard. As for Foster, she's reasonably plausible as a tense, panicked mother -- she works so hard at it that you can almost see the veins in her temples throbbing through her translucent skin. But at this point, I can't imagine Foster playing a character who's anything but tense -- or, at least, I wouldn't be able to if I hadn't so enjoyed her small role in last year's wonderful "A Very Long Engagement." In that picture, she played a woman living in the French countryside circa World War I and seemed perfectly believable. But watching her in "Flightplan," I just kept wishing that, missing child or no, she would just unclench her jaw for a minute or two.

The performance suits the movie too well: "Flightplan" is an exercise in edgy tedium, and even though it's only 90 minutes or so, it seems to last longer than an actual transatlantic flight. If you bring an eye mask and a few sleeping pills, you should get through it OK. A magazine or book wouldn't hurt, either. It'll be over before you know it.