Rita's wrath not too hellish 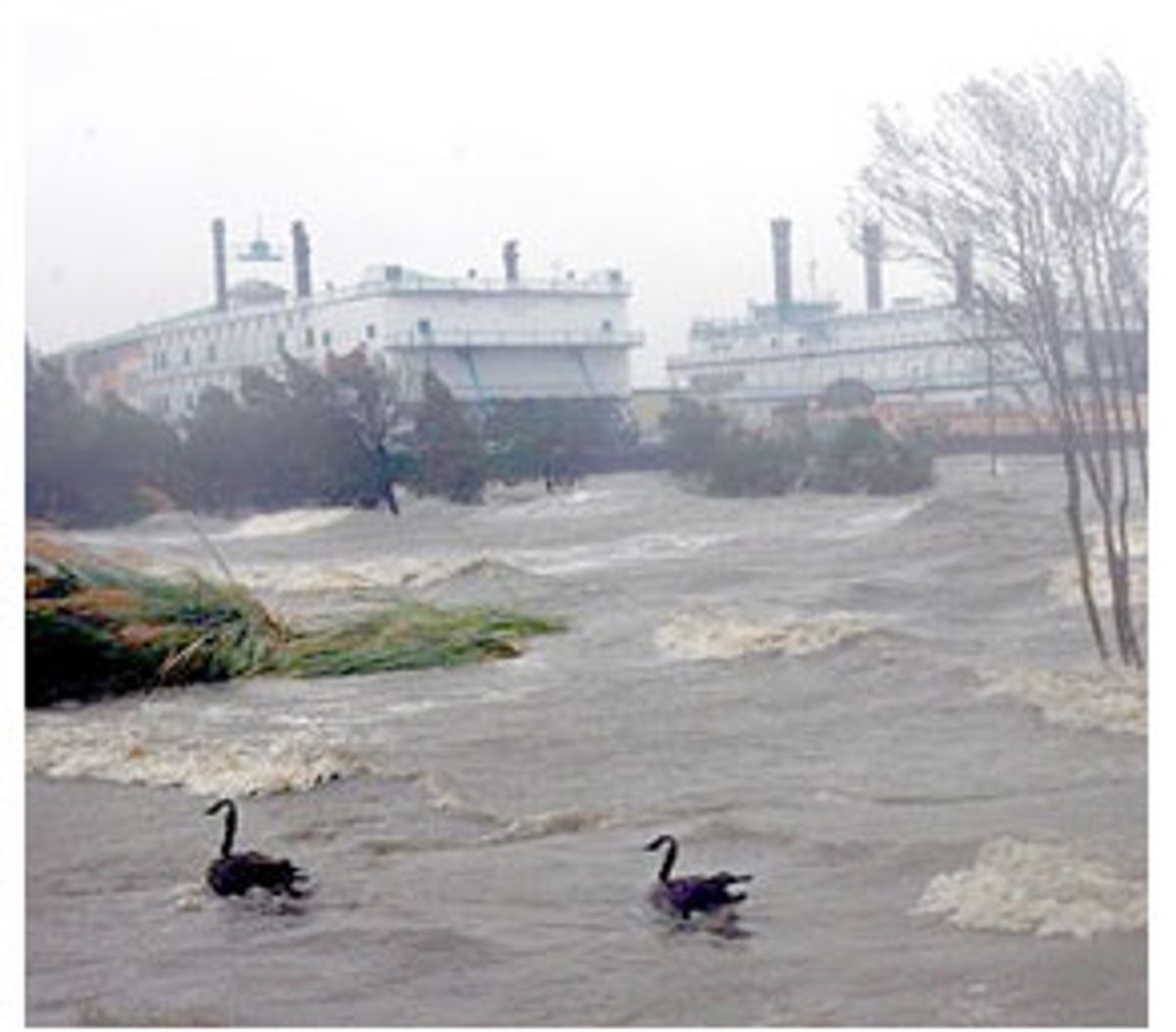 New Orleans, already reeling from Hurricane Katrina, escaped the worst of the storm, but some of its poor neighborhoods flooded anew as engineers scrambled to repair weakened levees. Rescuers used boats and helicopters to reach hundreds of residents along the Louisiana coast, where the storm surge reached 15 feet.

Rita made landfall at 3:30 a.m. EDT as a Category 3 storm just east of Sabine Pass, on the Texas-Louisiana line, bringing top winds of 120 mph and warnings of up to 25 inches of rain, the National Hurricane Center said. Weakening steadily, it was downgraded to a tropical storm with top sustained winds of 65 mph as it moved north past Lufkin in the afternoon.

Fears of severe flooding persisted; parts of the east Texas counties of Jasper and Tyler had received 10 to 12 inches of rain, the National Weather Service said.

There were no immediate reports of fatalities, though search teams in many areas had to wait for winds to subside before venturing out. The Energy Department said it appeared the oil industry, especially the concentration of refineries in the Houston-Texas City area, may have escaped major damage.

About 3 million people had fled a 500-mile stretch of the Texas-Louisiana coast ahead of the storm, motivated in part by the devastating toll that Katrina inflicted on New Orleans and other parts of the Gulf Coast barely three weeks ago.

Texas Gov. Rick Perry urged those who evacuated Houston and other areas not to return until officials declare their communities safe.

"Be patient, stay put," he said. "If you are in a safe place with food, water, bedding, you are better remaining there for the time being."

The storm triggered tornado warnings as it churned northwest. In Jasper County, a house with seven people inside floated in floodwaters after it came off its foundation, said sheriff's communications supervisor Alice Duckworth.

But the flood-prone cities of Houston and Galveston -- largely evacuated over the past four days -- escaped a direct hit.

In New Orleans, rain drenched parts of the abandoned city early Saturday, straining the levee system damaged by Katrina and causing more flooding in already ruined and abandoned poor neighborhoods. But the forecast of up to three inches throughout the day was less than had been previously predicted.

In southwestern Louisiana, authorities had trouble reaching stranded residents because of blocked roads and savage winds. Rescuers in boats were pulling hundreds of residents from flooded homes along a remote stretch of swampland stretching between New Orleans and the Gulf of Mexico as seawater poured over levees and into homes.

Boats were used to pluck people from their rooftops in tiny Pecan Island, in the marshes not far from the gulf. Dozens of others were rescued from flooded communities south of New Orleans, including a pregnant woman and her 4-year-old son who were stranded in Port Lafourche, an outpost on the Gulf coast about 60 miles south of the city.

In Lake Charles, home to the nation's 12th-largest seaport and refineries run by ConocoPhillips, ExxonMobil, Citgo and Shell, nearly all 70,000 residents had evacuated. Several riverboat casinos that mostly serve tourists from Texas also closed ahead of the storm.

"We see these storms a little differently after Katrina," said city administrator Paul Rainwater. "We all realize that no matter how safe you feel ... you have to take it seriously, you have to plan."

Louisiana Gov. Kathleen Blanco said over 90 percent of residents in southwestern parishes, about 150,000 people, had evacuated.

Fires were reported in and around Houston, including one in a two-story apartment building in southeast Houston that left at least eight units damaged, authorities said. Nobody was hurt, according to District Chief Jack Williams. Several buildings were damaged or destroyed by fire in Galveston, and a blaze broke out before dawn at a shopping complex in Pasadena.

As the sun came up in downtown Beaumont, a port city of 114,000, the few people who stayed behind emerged to find some blown out windows, damaged roofs, signs twisted and lying in the street and scattered downed trees. There was some standing water, but no significant flooding.

The wind was still gusting, but nothing like the 100-mph winds that ripped through early Saturday morning. A light rain was falling.

In Beaumont's nine-story Elegante Hotel in Beaumont, wind blew out massive windows in the hotel lobby, bringing down a chandelier and ripping the roof off another section of lobby.

"We stayed in a stairwell most of the time," said Rainey Chretien, who works at the front desk. "I didn't think it was going to be this bad."

As the storm raged, the torches of oil refineries could be seen burning in the distance from downtown Beaumont. Officials had worried about the storm's threat to those facilities and chemical plants strung along the Texas and Louisiana coast.

The facilities represent a quarter of the nation's oil refining capacity and business analysts said damage from Rita could send gas prices as high as $4 a gallon. Environmentalists warned of the risk of a toxic spill.

In the days before the storm's arrival, hundreds of thousands of residents of Texas and Louisiana fled their homes in a mass exodus that produced gridlock and heartbreak.

South of Dallas, a bus of Rita evacuees caught fire in gridlocked traffic, killing as many as 24 nursing home residents who thought they were getting out of harm's way.

Grocery shelves were emptied, gas stations ran out of fuel and motorists had to push their cars to the side of highways after idling for hours in stuck traffic and running out of gas.

White, the Houston mayor, expressed frustration with the gas shortages that left thousands of motorists desperate for gas on the freeways.

"It is just totally unacceptable that there was not adequate fuel supplies stashed around the state," he said.

President Bush, mindful of criticism the federal government was slow to respond to Hurricane Katrina three weeks ago, planned to visit his home state Saturday. He will go to the state's emergency operations center in Austin and then to San Antonio.

Bush, like other officials, urged citizens not to prematurely assume the danger was over.

"Even though the storm has passed the coastline, the situation is still dangerous because of potential flooding," he said. "People who are safe now ought to remain in safe conditions.

Wal-Mart Stores Inc., the nation's largest retailer, said Rita forced the closure of 150 of its facilities in Texas and Louisiana. About half of them were without power early Saturday. Home Depot Inc. said 46 of its stores were closed, including 41 in the Houston market.

More than 675,000 CenterPoint Energy customers in Texas were without power in the company's service area, which stretches from Galveston into Houston and north to Humble, company spokeswoman Patricia Frank said. Entergy spokesman Chanel Lagarde said about 250,000 of its Texas customers and nearly 300,000 of its Louisiana customers lost power because of Rita.

In Galveston, about 100 miles away from the storm's eye, a fire erupted in the historic Strand district late Friday. Wind-whipped flames leapt across three buildings. City manager Steve LeBlanc said the blaze could have been caused by downed power lines.

"It was like a war zone, shooting fire across the street," Fire Chief Michael Varela said Saturday.