Rita and infighting among organizers threatened to make the day a washout, but Saturday's massive antiwar protest took Washington by storm. 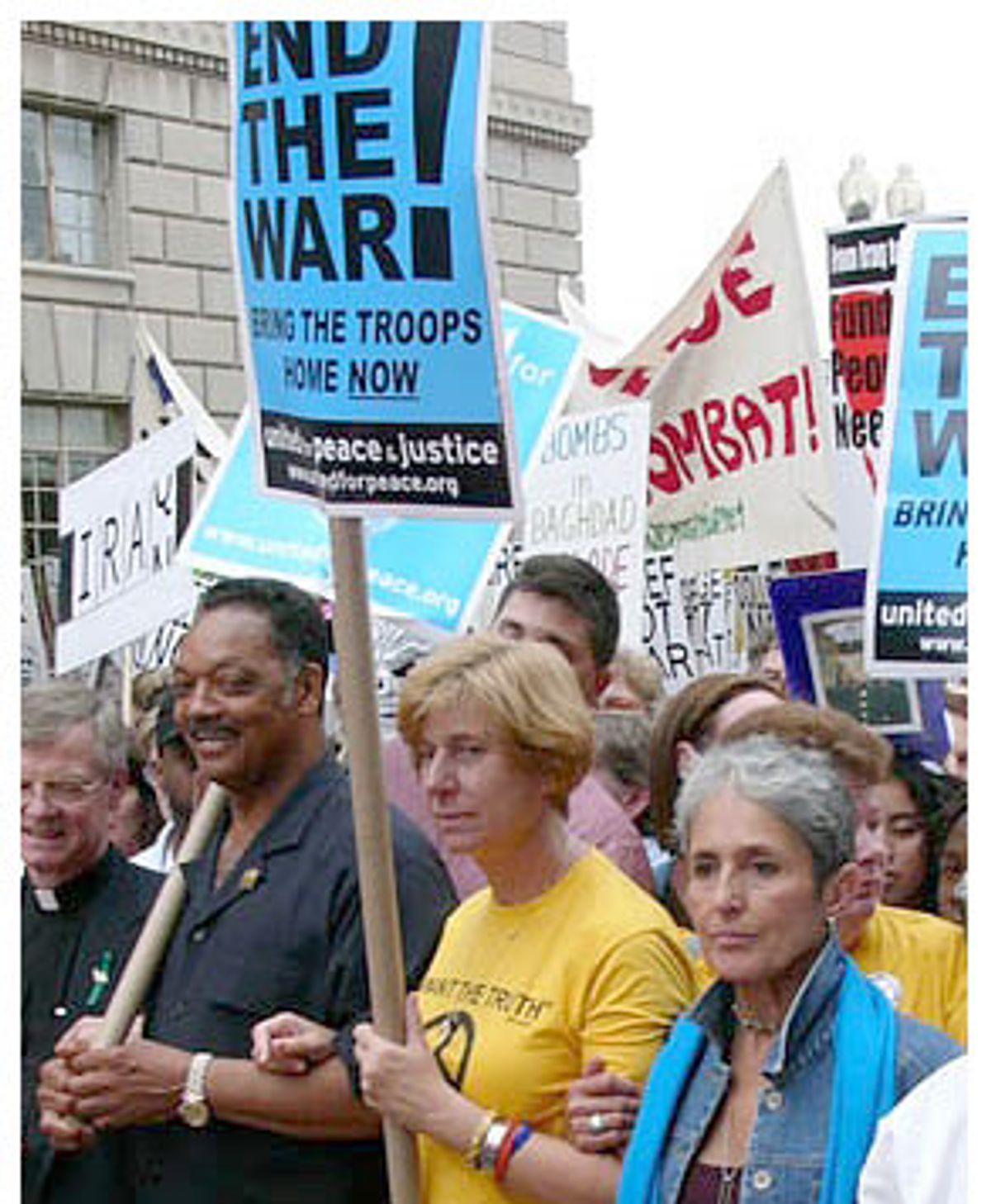 Though Saturday was the first day a permit had been granted for an antiwar march past the White House since the Iraq war began, one could be forgiven for having low expectations for the event.

To begin with, the joint organizers, International ANSWER and United for Peace and Justice (UFPJ), feud so regularly that they had to sign a pact promising not to attack each other until the event was over.

Then there was ANSWER's rejection of message control -- its leadership demanded that each of its component organizations be allowed to protest issues besides the war. Starting at 9 a.m., therefore, the Palestinian boosters took over Farragut Square with their own signs and chants, while bands of anarchists, affordable housing advocates, and Hugo Chavez supporters staked out intersections around D.C.'s downtown.

Finally, rain was in the forecast, and Hurricane Rita was already sure to dominate the next morning's lead news slot.

But yesterday's protesters beat the odds and pulled off what was certainly D.C.'s biggest antiwar demonstration since the Iraq occupation began. Organizers claimed as many as 250,000 demonstrators attended; though D.C. police estimates were more conservative, none pegged the crowd at below 100,000. By the time the rally convened at 11:30 a.m., scores of demonstrators filled the Ellipse, spilling onto the Mall, the streets around the White House, and the Washington Monument -- a hopeful sign that the effectiveness of the peace movement may have reached a turning point.

While the half-dozen UFPJ and ANSWER speakers held forth on incongruous topics ranging from discrimination against American Muslims to the illegitimacy of Bush's 2000 Florida victory, their two principal demands were an immediate withdrawal of American troops from Iraq and a new federal focus on the devastated Gulf Coast. "National security begins in New Orleans, homeland security begins at home," Jesse Jackson told the crowd. "Bring the troops home now."

Other speakers made the same Baghdad-New Orleans link, reminding the crowd that many Louisiana National Guardsmen were fighting abroad when the hurricane struck. Demonstrators waved signs bearing the phrase "Make levees, not war" in response. "I think that it's broadening the focus," Baptist Peace Fellowship demonstrator Tom Burkett said of the combined antiwar and disaster relief message. "Are we going to be a better country by spending another $200 billion [in Iraq] or spending it on the Gulf Coast?"

It would have been a stretch to call the speech given by bereaved military mother turned peace activist Cindy Sheehan memorable, but those gathered loved it anyway. In a strained voice, she copiously congratulated the audience for coming and condemned the moral abominations of torture and preemptive war before demanding that American troops be immediately brought home. "We're going to say not one person should have died, not one more should die," she said with the White House lawn at her back. "Can you scream that to the White House?" The audience could.

For Sheehan, it was the final stop on the Bring Them Home Now Tour. Operating out of a tent dubbed "Camp Casey" in honor of her dead son, the military family organizations that have traveled with Sheehan were neither the protest's largest nor its most vocal contingent. As the afternoon march began, several such families opted to sit it out. "Can't march," said Phil Waste, a sturdy 65-year-old who sat on a bench with his wife, Linda, watching demonstrators carrying dozens of flag-draped cardboard coffins stream by. "My knees are shot." With three sons and two grandchildren currently serving in the military, the Shellman Bluff, Ga., couple had been traveling with Sheehan for the last six weeks as members of Military Families Speak Out. Seeing her in Crawford, Texas, they said, had convinced them they owed it to their children to protest.

"They're being misused," Phil said. "They're forward observers, and now they're being used as policemen, driving up and down the streets of Baghdad like ducks in a shooting gallery. They're not trained for that." The couple believes stress is taking a great toll on their family: One of their sons brought a backpack full of disposable cameras with him on his first deployment, Linda said, and "when he got home, he threw them all away. He said he never wanted to see the pictures."

Demonstrators like the Wastes and Cindy Sheehan added gravitas to an event in search of it. As folk musician Steve Earle would bluntly state later in the afternoon, "Cindy simply has credentials that a lot of us do not have. We needed her."

The press coverage in the run-up to the protest -- which has hardly been favorable to the antiwar movement in the past -- this time characterized the protesters as a more mainstream force to be reckoned with. "Antiwar Rally Will Be a First for Many," the Washington Post's front-page headline announced Friday. "Focused Message Draws Protesters of All Types." Associated Press reporter Jennifer Kerr somehow found Paul Rutherford, a 60-year-old lifelong Republican-cum-peace activist from Vandalia, Mich. "President Bush needs to admit he made a mistake in the war and bring the troops home, and let's move on," Rutherford declared.

Although there must have been a few other Rutherfords scattered throughout the crowd, the overwhelming majority of attendees were committed activists whose politics ranged from progressive to leftist -- the sort of people who always go to war protests, or at least stay home and feel guilty about it.

That's not to say Sheehan and crew didn't have a profound impact on the protest -- they did -- but it was largely an internal one. Lauren Sullivan, a Lawrence, Kan., graduate student who took a hiatus to staff Sheehan's now-mobile Camp Casey, believed Sheehan cleared much of the static out of the antiwar movement's message. "Cindy got it down to 'What noble cause?' and 'Bring them home now,'" Sullivan said. Everywhere Sheehan went on Saturday, she was mobbed by well-wishers, seeming to escape the often-fractious ideologies of protest politics: Even bandanna-masked anarchists said she's cool.

Whether due to Sheehan's media juggernaut or the fallout over the Bush administration's continuing stumbles at home and abroad, some of the organizers of Saturday's protest spoke for the first time like politicians with something to lose. "We are at a tipping point whereby the antiwar sentiment has now become the majority sentiment," ANSWER coordinator Brian Becker proudly proclaimed. Nowhere does he touch upon his former statements to Workers World regarding Iraq's "long, proud tradition of anti-colonial resistance." Good polling data can do strange things to people.

That's not to suggest that the antiwar movement has come down with anything resembling military discipline. In the frequently carnivalesque march that looped around the White House and downtown, one could spot just about any slogan imaginable, from the 9/11 conspiracy theorists to the simply unintelligible: Riding a green ladies' bicycle, a white-bearded hippie sanctimoniously coasted past a line of stationary D.C. cops, holding aloft a poorly lettered sign reading "WHY? Motherfucker$." Four of D.C.'s finest double over laughing in his wake. "The city prefers the officers to keep a straight face," their sergeant said. "Sometimes that's hard."

Earlier that afternoon, a group of anarchists splintered off the parade route onto K Street NW, overturned newspaper boxes and, according to Jeremy Hammond, a self-described "anticapitalist traveler," controlled the street for two hours. The police arrested one or two, and chased the rest out on motorcycles. Later, Hammond says, the anarchists regrouped in front of a military recruiting office, and succeeded in being shot at with rubber bullets. (The skirmish has not appeared in any other published accounts.)

In front of the J. Edgar Hoover FBI Building, a few hundred counterprotesters drew notice far out of proportion with their numbers. Organized by Karl Singer, a New Jersey I.T. technician from a military family, the "Support the Troops" rally lined a block heavily fortified by barriers and police, baiting the less pacifistic protesters through a bullhorn on everything from abortion to personal grooming. "Even people in the military don't want to fight wars," Singer admitted in a reflective moment. "But sometimes wars are necessary." Behind the counterprotesters' lines, a solidly built young man with two prosthetic legs rode a Segway up and down the block like a general patrolling his ranks.

These are all minor ripples, though, not much more of a crisis than the light drizzle that fell for a few minutes at the march's beginning.

In the late afternoon, the protesters, tired after the slow-moving march, begin to put down their signs and disperse. A Salvation Army employee named Kevin Lindsey, who says he is "embarrassed he didn't get involved in war protests earlier," has gotten stuck with the front end of one of the flag-draped coffins. He isn't sure which of the dozens of organizations the prop belongs to -- he just took over, he says, because "somebody was getting really tired." As he nears the Washington Monument, Lindsey, not sure what to do with it, says, "I know I can't just put it down."