On the road again

At the storm-damaged Elegante Hotel in Beaumont, Texas, weary evacuees from New Orleans pack up their scant belongings and spirits and search once more for shelter. 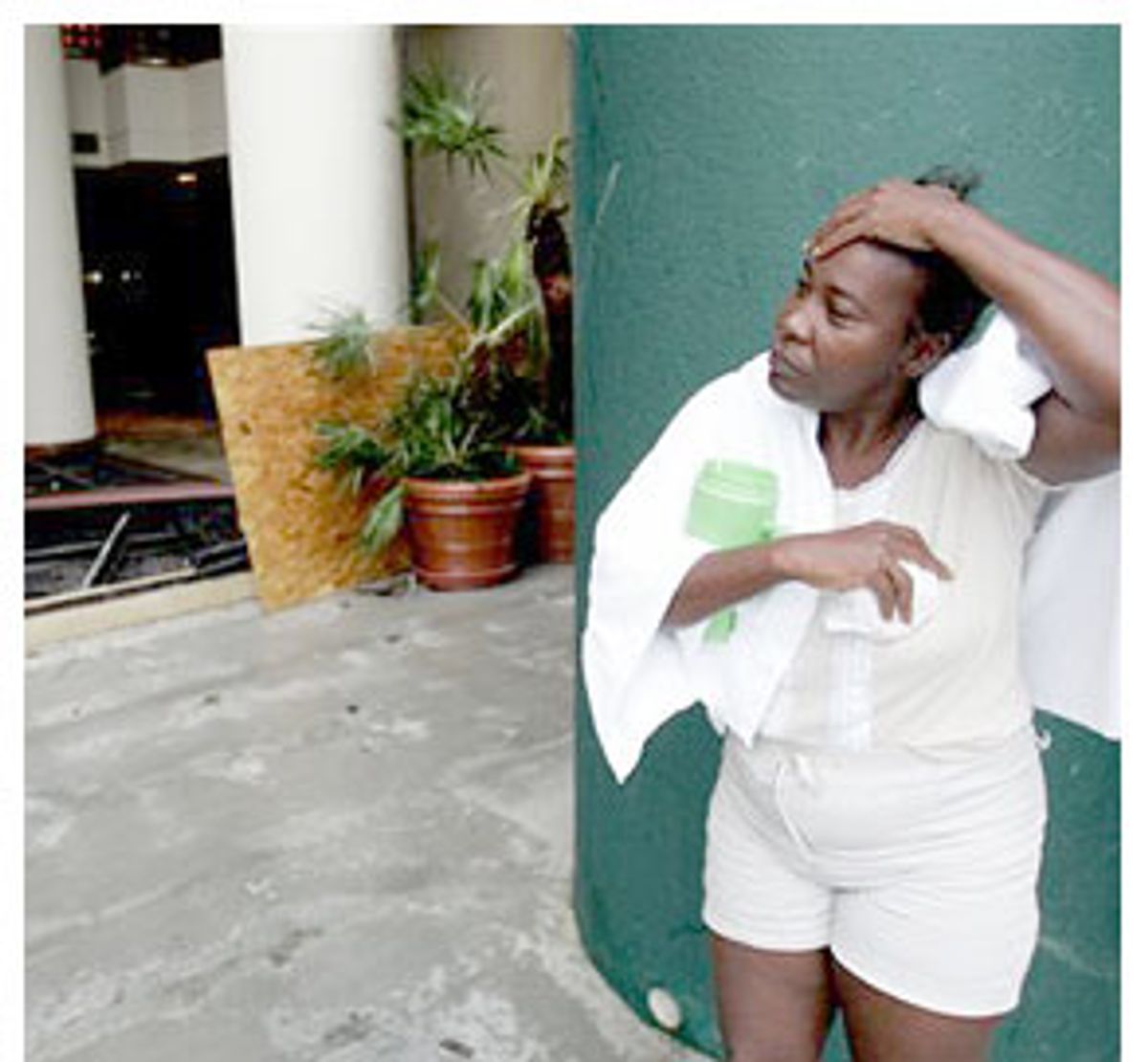 Hurricane Rita has converted the lobby of the MCM Elegante Hotel into an open-air patio. Before dawn, 120 mph winds blew out the lobby's panoramic two-story windows. Now, at noon, indoor palm plants are swaying in still gale force winds. The royal blue carpet of the hotel's grand entryway, which was just remodeled in May, is as soggy as a marsh. Rain pours down from a shattered sky light.

Pacing restlessly through the lobby are Emelda Williams, 60, her daughter Alicia, 24, and grandchildren, Tazriyell, 2, and Jontaz, 4. They are waiting for food, water, and electricity. The Williams family are Hurricane Katrina evacuees from New Orleans, now waiting to be evacuated from Hurricane Rita. "We've been through this before, and we can't take it anymore," says Emelda with a sigh. It had been a long night. When the hurricane pummeled the windows, it set off the fire alarm, creating panic, as nearly 250 people -- mainly New Orleans evacuees -- figured the nine-story hotel was on fire.

Just after the final shards of glass are swept up, Texas state troopers in yellow slickers and cowboy hats wander in, check out the damage, and leave. Alicia shows me a soiled white bandage on her upper arm, covering a deep cut she sustained while fleeing Katrina. She say it's infected. The Williams family were home in downtown New Orleans when Katrina struck. They waded through waist-high water to reach a cousin, who had arrived in his pickup truck. They braved the wind and rain on the highway, prayed they wouldn't run out of gas, and arrived in Beaumont. Initially they found shelter at the Calvary Baptist church. A week ago, the Red Cross put them up at the Elegante, where they have been forced to buy food at the hotel's buffet.

Alicia says Jontaz needs to go to the hospital because he has a bad cold and his ears are "leaking". The untreated wound on Alicia's arm is leaking too. With electricity and supplies gone from the Elegante, the Williams are homeless once again. They haven't eaten for a day.

"How do they expect us to live and not eat?" asks Emelda. "That's what we went through in new Orleans." Emelda explains that she has another cousin, who was evacuated from new Orleans to Houston, and then, under the threat of Rita, from Houston to San Antonio. If the Williams family can find an open gas station, they'll all pile in the pickup and head for San Antonio. They were not amused this morning when a large pickup stopped in front of the hotel to deliver gas to the news media and not evacuees. "We can't stay here when night comes," says Emelda. "Where is the Red Cross now?"

Other New Orleans evacuees are less polite about their impatience. A fortyish, African American woman in a wheelchair, wearing a T-shirt that says her faith is in Jesus, has less faith in her government right now. "Where the hell is FEMA?" she cries out. "Where the hell is George Bush? There are people in this hotel with nothing to eat. There are people in this hotel who have no water."

As the afternoon wears on in the balmy heat, the scene inside the Elegante is surreal. Your basic interstate hotel for conventioneers, white tablecloths lay over tables in vast and empty suites. Flags for Texas and the Rotary Club are draped behind podiums. Just now, a noisy bevy of restless kids from New Orleans are playing in the hotel's fitness center, pedaling like mad on the LifeCycles, jumping on treadmills and weighing themselves on the tall scales.

Wandering through the lobby are a handful of Beaumont locals, who stayed the night in the seemingly invincible hotel rather than brave the storm in their vulnerable houses, a few miles away. Beaumont is America's first oil boomtown, home of Spindletop, site of the archetypal oil gusher. Riding the ebb of flow of the wildcatting oil business over the past century, the hardy city has seen its share of hard times -- and that includes hurricanes.

Inside the Elegante, Beaumont resident Rena Hill, 46, says she just returned from checking on her house. Fallen trees smashed two holes in the roof -- one in the living room, one in the kitchen. But it's not that bad, she insists with ingrained Texan humility. "My husband can patch it." Besides, she says, she works as a fire guard for ExxonMobil, a chemical plant that is more dangerous than hurricanes. As for the weather, well, she says, "I put my faith in God. Whatever was going to happen was going to happen."

I arrived in Beaumont after a bizarre early morning drive from Austin. Two days after the gridlock to end all gridlock, I zipped through the ghostly Houston metropolis in my rented Toyota Prius without incident, if you don't count hydroplaning along rain-slicked I-10, dodging power lines and tree stumps, and stopping to show your press pass to wary state troopers.

On the radio, Houston mayor Bill White begged folks not to return to their homes. But plenty of people must have been listening to CDs. I saw countless families in their SUVs, their red canisters of Pringles and rolls of toilet paper visible in back windows, headed back to Houston. Some were hauling boats and others had ATVs in the back of pickups. One farmer in a tractor was plowing his fields in the rain. On a billboard that broadcast, "Your message here," tall letters read: "The weather never keeps me from working." I knew I was in Beaumont when I saw a tourist sign boasting, "Texas-friendly Bayou Fun." Although I had to read it upside down, as it dangled from its post.

When I first arrived at the Elegante, I met Annal Yu, working at the front desk. She was cooking pork chops and rice over a camping stove. "FEMA didn't do this for us," she didn't hesitate to tell me. With Hurricane Rita receding, the evacuees are once again on their own.