OK, it's not Katrina, but at one of the spots widely expected to be shattered by Rita, FEMA and other agencies didn't seem ready for this hurricane, either. 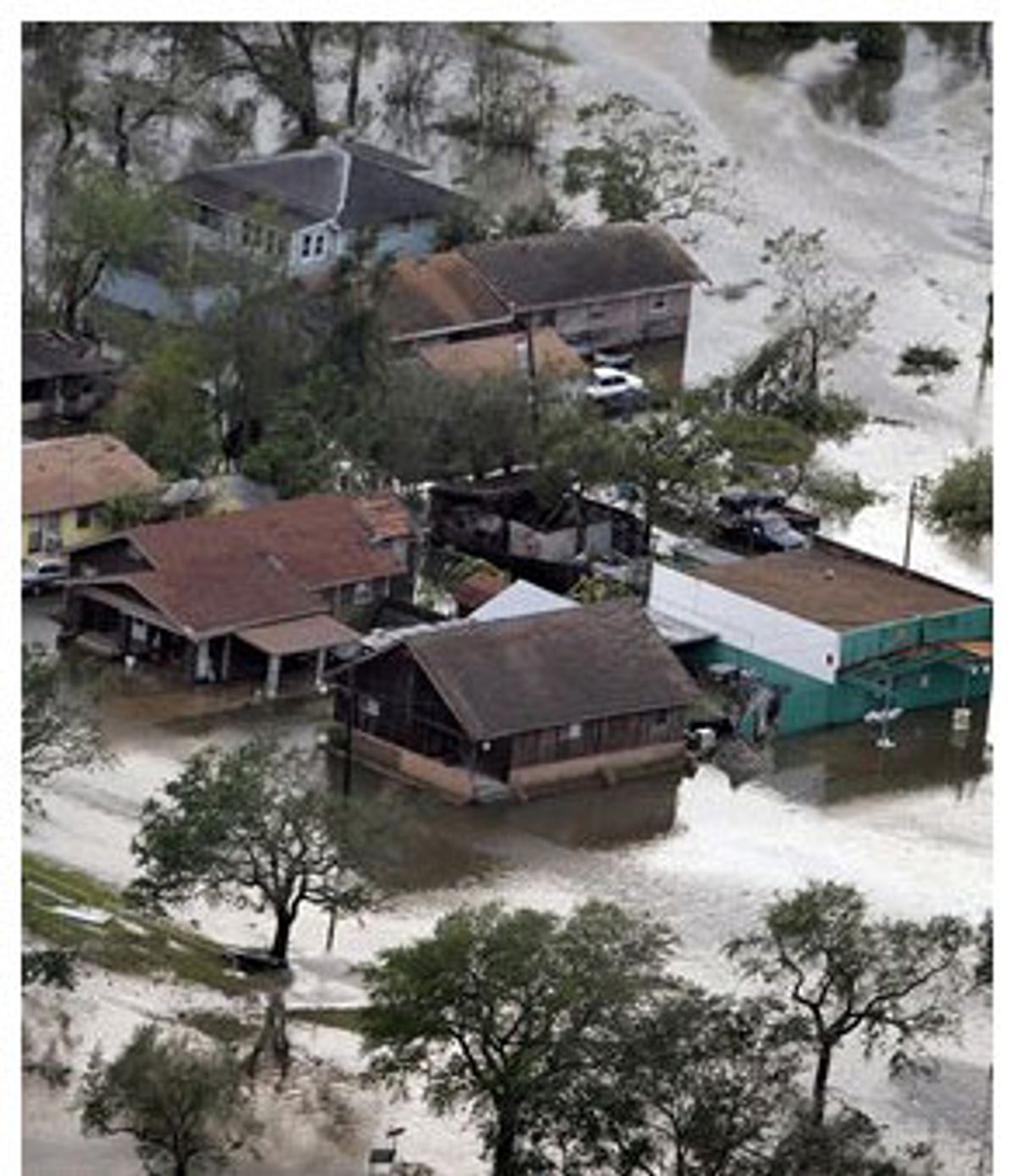 Monique Kinlaw, 22, lived in Carver Terrace, a brick federal housing complex with a clear view of a refinery just two blocks from a church that has been blown open to the heavens by Hurricane Rita. The church doesn't have a name visible right now; that part of the sign out front has been destroyed, but another section of the sign still stands, giving this biblical message in black letters: "You do not know what will happen tomorrow. James 4:14."

The now nameless church's blue stained-glass windows have collapsed inward under the gabled roof, revealing the chandeliers still hanging inside. Blue glass litters the sidewalk out front. There's no one here from the church, much less the city, to even begin to think about cleaning it up. Kinlaw doesn't know what will happen tomorrow, but right now she knows she has no food, no ice, no electricity and it's 95 degrees and humid. "We don't have nothing. We're glad to have the water wash our butts. It just came on. This is like a survival game. I thought New Orleans had it bad; now we got it too."

She and her two friends hanging out outside her building say they couldn't evacuate before Hurricane Rita. "We didn't have the money to leave; we didn't have the gas to leave," says Kinlaw. "It's the end of the month; nobody's got no stamps." Gas is now so scarce here some people are siphoning it out of others' cars. Kinlaw and her friends are among the holdouts stuck in a city that usually has 57,000 residents but maybe has a few thousand now.

It's clear this is no Katrina, with tens of thousands stranded in dangerous official and unofficial evacuation centers with no food and water. Still, for all the government self-congratulations about getting out ahead of the storm, the conditions in Port Arthur are sketchy. You don't see military personnel getting MREs to Kinlaw and her friends, who had food that is now spoiled, and are getting hungrier. The city turned the water back on Sunday, so conditions are improving, but Kinlaw can be forgiven if she's not sure the government learned all the lessons of Katrina.

Command central for the authorities who are supposed to restore Port Arthur is located at a Holiday Inn at the intersection of Highway 69 and Jimmy Jones. Police, military and media bustle in and out of the hotel looking officious. The lobby is trashed with muddy boot prints, and still covered with a thin layer of water thanks to a glass doorway to the pool out back that smashed during the storm. By Sunday afternoon, FEMA has been here for three hours, but the handful of storm victims who've made their way to this command central haven't seen any help from them yet. They've been promised a hot meal and that U-Hauls will arrive with five-gallon jugs of gas. But while they continue to wait, they content themselves with drinking Gatorade and Country Tyme lemonade and eating bags of Cheetos provided by the hotel management. There's a shelter at Ford Park Arena in Beaumont that these people could stay in while their power is restored, but the catch is there's no bus to take them there. They have to find a way to get there themselves, and Beaumont is about 25 miles away.

Meanwhile, the tens of thousands of residents who have evacuated are anxious to get back and see what happened to their homes. But the city is allowing in only emergency personnel, with state troopers blocking entrances. It's a state of affairs that has prompted heated fulminations on talk radio -- "This is America!" -- and there's a lot of alarm about how the government can separate families from their homes and businesses.

But inside Port Arthur, it's not hard to see why the authorities are loath to let the residents come back. All the power is out, there's nowhere to buy anything, even if you did have the money, because every single store is closed, traffic lights don't work anywhere, and if you have the gas to drive around it means dodging huge pieces of debris, like metal roofs from decapitated carports sitting out in the middle of major streets. State troopers and local police, as well as a few locals still here who have the fuel, veer their cars around roofing tiles, insulation, chunks of gas station siding, and huge panels of broken glass. The hazards also come from above; the yellow traffic lights dangling down precariously from wires above intersections where they once maintained order are now a hazard. And power poles lean at crazy angles -- 45 degrees here, 60 degrees there -- alongside the road. They're still connected by wires to the poles around them, pulling them toward the ground too.

The main power transmission and so many power lines have been knocked out here that the word is it will be two weeks at the earliest before electricity is restored. One state trooper helpfully suggested to a friend of Kinlaw's that he try to find a ride out of here, but given the gas shortage, that doesn't seem very likely. Kinlaw watches as two men drive by going the wrong direction on a one-way street. "How they be rolling? They are stealing gas!" She says that two years ago, the Salvation Army came in to offer help after a major storm. Since Rita, she hasn't seen any relief workers offering anything so far.

Just blocks away, members of Jefferson County Drainage District Number Seven are salvaging truckloads of food from the Market Basket grocery store. The store's owner has given them permission to take what they can from the grocery that has been waterlogged by the hurricane. The sliding glass front doors blew in during the storm. And the roof leaked, turning the place into a fetid, humid mess. The air was so moist in there that labels on some of the canned foods just peeled off spontaneously. The smell of rotted meat wafted out of what was left of the front door as the men of District Seven wheeled shopping carts loaded with cases of Coke, bags of onions and potatoes, six-pound cans of Wolf-brand chili and six-pound cans of tomato sauce to load into eight white pickup trucks. They salvaged toilet paper, plastic cups, bags of barbecue potato chips and twelve-packs of diet iced tea, with some workers even pausing in their spree to bag smaller items at the checkout counter.

Drainage District Seven has a crew of 75 who operate the levees and pumps that have for the most part kept Port Arthur, which is just about sea level, from flooding in the hurricane.

"That's all we do, hurricane flood protection," says Doug Wright, 54, who had worked for the district for 30 years. But even this experienced hurricane crew didn't plan to need more than three days of food. So this decimated grocery store is a soggy boon.

Wright says it's the district's new 260-acre, 20-feet deep retention pond that allowed the crew to let water drain out and keep street flooding to a minimum in Port Arthur. He also says, "Lucky for us we were right on the end of the western eyewall" -- which meant more wind than rain. Wright was unprepared for one aspect of the storm: the frenzy of phone calls to his cellphone from frantic Port Arthur evacuees. "I had hundreds of calls even from people I don't know, some during the hurricane." Could he check on their houses to see how they're weathering the storm? "Can you go look at my carport?" he mimics one. The District Seven men had evacuated to Beaumont, and they could not make house calls.

"Naturally, everyone wants to know if their house stood up." He got so many calls he was hoping cell service would be knocked out and he'd have to go to satellite. And he was irked when a friend in Austin called to say that he'd seen a news report of Geraldo Rivera standing at the intersection of Memorial and Bluebonnet in Port Arthur next to a flooded railroad underpass, implying that the city streets were awash in water. "It's an underpass," laughs Wright.

As for the actual damage to the town, it's mostly not structural. Garage doors, carports and businesses based in metal buildings suffered the most. "I did see a couple of old houses knocked down. But they looked like they were ready to fall down anyway. When we get power back on, we can start rebuilding the town," says Wright.

The damage is arresting to see but hardly uniform. The Dairy Queen looks like a very hungry giant tried to grab a Flurry through the roof, while across the street Southeast Texas Cosmetic Dentistry, with its glass doors and windows, appears utterly untouched by the storm. A truck belonging to Mike's Furniture Liquidators had rolled over onto a fence and sits perched at a 45-degree angle awaiting liquidation. Tree branches are strewn throughout residential neighborhoods and dogs roam the streets forming minipacks of two and three, obviously on the loose from their now absent owners.

Ernest Esqueda, 52, just needs gas to get out of here. He wasn't able to evacuate before the storm with his family to Florida, because he was busy taping up the windows at the central mall where he works. He got the building ready for the hurricane. By the time he got out of work, it was too late to cash his check. And besides, the local gas stations were out of fuel. He still has his uncashed check. His boss, who successfully evacuated to Baton Rouge, has offered to pay to put him up in a hotel if he could just get to one in Beaumont. "I'm not asking for no handouts. I'm not that kind of person," says Esqueda. "But what can you do if nothing is open?" He adds: "I hope they come before it gets dark."

This is the frustration of several others here. They may have some money, but there is literally nowhere for them to spend it to buy the things they need. Some are signing up to work at the refineries as fireguards tomorrow morning, on the 7 a.m. shift, as the damaged petrochemical plants try to get up and running, since they're contributing to the region's larger gas shortage.

In any case, these Rita survivors have had enough of waiting outside the Holiday Inn. With or without food or gas, they need to get home soon. There's a 4 p.m. curfew in Port Arthur these days. And it's already 4:17.