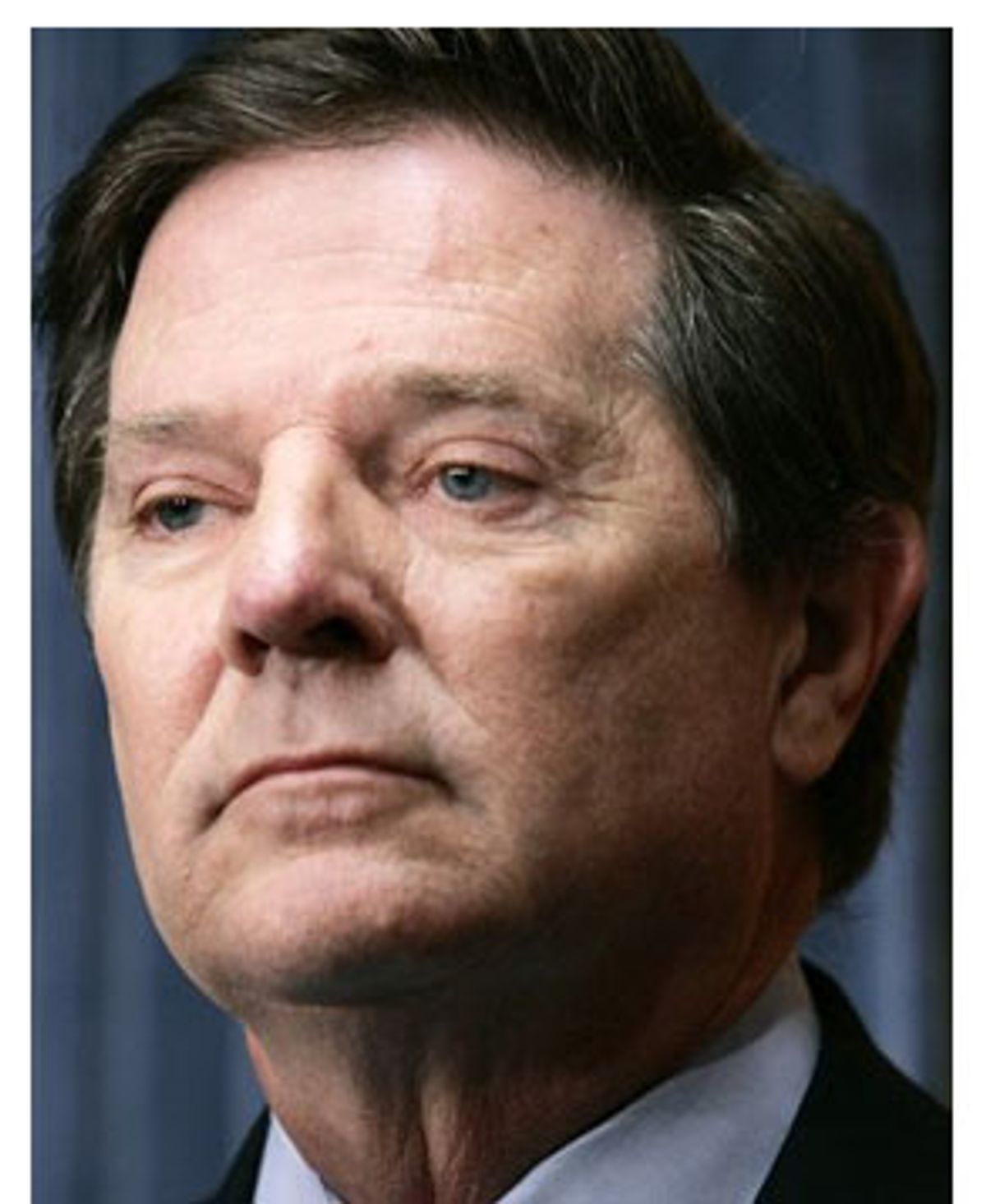 Morning Briefing:
Two desperate housewives, one current, one former: In what seems kind of like a desperate gambit to restore some of her husband's lost approval-rating numbers, Laura Bush has agreed to appear on a special Katrina-themed episode of "Extreme Makeover: Home Edition." The home makeover show is heading to Biloxi, Miss., to stage a delivery of relief materials like mattresses and pants, and the first lady will be on hand, though no one seems quite sure what she'll do. "I think we say, 'Mrs. Bush, the stuff is over here, the people are over there, could you grab the other end of that mattress?'" said the show's executive producer, Tom Forman. Bush press secretary Susan Whitson had in mind something more like handing out clothing and hugs. But the White House isn't the only branch of government looking to polish its image a bit: The Supreme Court has agreed to hear Anna Nicole Smith's ongoing case claiming up to $474 million from the estate of J. Howard Marshall II, the oil tycoon she married in 1994 (when he was 89 and she was 26). Since Marshall died in 1995, his son has been fighting to keep the family money out of Smith's hands. The case has wandered through several courts already, and now the Playboy bunny turned reality TV fixture will be appearing before the high court. "She's very excited. She will be attending arguments, there's no question about that," said Smith's lawyer, Howard K. Stern. (Seattle Times via Drudge, Yahoo! News)

And many "Benator" jokes were made: Ben Affleck insists, or at least his people do, that there is nothing to the rumors that Virginia Democrats are pushing him to run against Republican Sen. George Allen in next year's elections. As the Washington Post reported on Tuesday, "Why, who should happen to be pondering a move to Thomas Jefferson country but a certain square-jawed media magnet with a taste for liberal politics and millions to spend on it ... Ben Affleck!" Affleck and his wife, Jennifer Garner, were seen driving around rural Virginia looking at houses. But what some thought was a potential house-hunting trip was just a fun weekend for the couple, nothing more, according to Affleck's spokesman, Ken Sunshine. And while Sunshine denies the Senate rumors, he still thinks his client "would be a superb candidate for public office in the future. Right now, he's very busy directing his first feature movie for Disney, 'Gone, Baby, Gone.'" (Washington Post)

Down, but not out: Kate Moss may have turned into the most publicly shamed model of all time, but she's not giving in yet. An online gambling site, in a clear bid for publicity, offered the recently unpopular model a $5 million contract to do a campaign for it, but Moss thinks she hasn't sunk that low. "This story is absolute rubbish ... Kate will not be working with this company," her publicist told the New York Daily News. And a friend of the model's told Page Six she's defiant in private, too: "She just told her agent three days ago that she doesn't give a [bleep] what people think, she will not change her lifestyle because of a tabloid or public opinion." The one job Moss might hold on to, oddly, is with the cosmetics company Rimmel, for which she just finished shooting a campaign for a product called Recover. And then there are the reports that she has been talking to director Ron Howard about starring in a movie about the fashion industry. Meanwhile, U.K. TV channel Sky One says it's going to be showing the famous snorting footage that started it all as a part of its upcoming documentary "Kate Moss: Fashion Victim?" (N.Y. Daily News, Page Six, WWD)

Also:
She doesn't care what Tom Cruise thinks: Brooke Shields wants another baby, telling Oprah on Tuesday, "I've always wanted more than one child." She appeared to have moved past Cruise's weird attack on her use of antidepressants for postpartum depression, saying, "It's what he believes, I guess"  The perfect indie film couple marries: Jennifer Jason Leigh ("Single White Female," "The Anniversary Party") and director Noah Baumbach ("Kicking and Screaming," co-writer of "The Life Aquatic With Steve Zissou") were married over Labor Day  The perfect mainstream TV couple splits: Chad Michael Murray and Sophia Bush, both of the WB's drama "One Tree Hill," have announced they're getting divorced after five months of marriage  Hollywood is making good on its promise to hunt down movie pirates: On Wednesday, a man in St. Louis became the first person ever convicted of illegally videotaping in a movie theater -- he may end up doing time for filming "Bewitched" and "A Perfect Man" and then uploading them to the Internet. And in California, eight people were charged for their part in leaking "Star Wars: Revenge of the Sith" online the day before it opened in theaters. Albert Valente, who took a copy of the movie from the post-production company where he worked, pleaded guilty and may also face jail time  A new Gallup poll has good news for the media: The public's trust in the news is way up from last year -- which means that now only 49 percent of people say they have either not very much trust in the news or none at all  The inevitable process that will someday end in the total conglomeration of the media has been slowed for the moment: The potential purchase of DreamWorks by NBC Universal has fallen apart because of issues around both price and creative control. DreamWorks co-founder David Geffen seems to lay some of the issues at his partner Steven Spielberg's door, saying the director was used to "having his own company and doing things exactly the way he'd want and not consulting with others."

Money Quote:
Tara Reid, finally speaking out nearly a year after she famously popped out of her dress at Diddy's 35th birthday party, on the reaction she got: "People act like it was the worst crime in the world. It was a mistake, you know. But you would think my boob had popped out and shot Gandhi!" (Ananova)

Turn On:
The fall new-season rollout continues with the premiere of "Veronica Mars" (UPN, 9 p.m. EDT). At 7:30 p.m. EDT, Cinemax presents "The Children of Leningradsky," a documentary on the children who live in the Moscow subway.

Get more of The Fix here.
To send a hot tip to The Fix, click here.