When it comes to the Red Sox vs. Yankees, there's just one factor left to be closely examined: Who sings better, Arroyo or Williams? 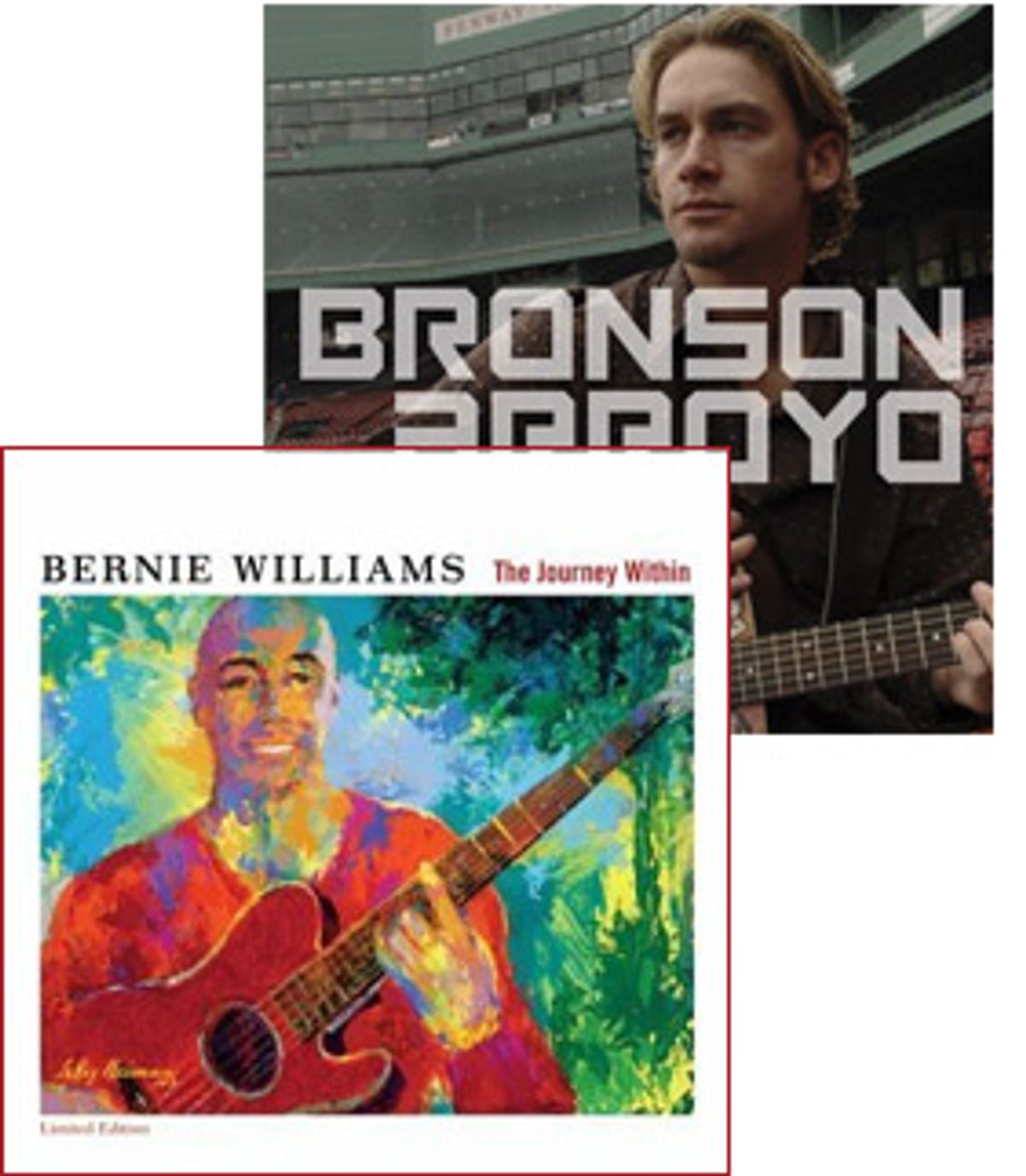 You can smell it in the foul air blowing from Boston to New York. Today begins a new chapter in the greatest sports rivalry of all time. Not since 1978 have the Red Sox and the Yankees been locked in a down-to-the-wire race for the postseason. (Hey, Red Sox Nation: Remind me again how that one ended?) But not since 1919 have the Yankees faced defending World Series champions that call Fenway Park their home. (Red Sox Nation retorts: Remind us again how the 2004 American League Championship Series ended?) And since it wasn't until shortly after the 1919 season ended that New York bought Babe Ruth's contract for $100,000 -- thus beginning the Curse that Boston reversed last year, and hence the modern Yanks-Sox feud -- the rivalry is in uncharted territory. Whatever happens after Sunday, the end of the regular season, the real World Series will have been decided over these next three days. As a result, statisticians, analysts, beat writers, bookies and barflies are furiously picking at the tea leaves for clues as to how it'll go.

No statistic is too obscure to preclude a hidden clue. No bit player is unimportant: As Sox fans know all too well, Bucky Dent and Aaron Boone stepped into the batter's box as easy outs and left it as immortals. The statistical scavenger hunt is so intense because the Red Sox and the Yanks are just too evenly matched. Their strengths (relentless offense, the willingness to take big risks) and their weaknesses (inconsistent pitching, maddening fielding mistakes) are identical.

That's why a determinative hint may come from the most improbable of sources: musical talent.

Over the past two years, two crucial members of the Yankee and Red Sox rosters have issued vanity CDs: "Covering the Bases," a collection of mostly early '90s grunge classics as performed by Boston starting pitcher Bronson Arroyo; and "The Journey Within," an eclectic mix of Caribbean-inflected jazz by Yankee center fielder Bernie Williams. Both men are guitarists, and the similarities end there. If the weekend's victor can be divined through a close listen to these albums, the Yankees should barely -- just barely, as in final-out barely -- edge out the Red Sox. And the games will be very, very ugly.

Fans will instantly recognize a tremendous amount of each team's esprit de corps on these records even before they reach the CD player. Both men appear on their album covers clutching their guitars. Bernie's warm smile, earthy V-neck sweater and out-of-focus, porch-and-trees background reflect the Yankees' aristocratic refinement. Arroyo's cover shows him seated in Fenway, his guitar covered in band stickers, sporting a hipster polyester shirt and goatee and looking pensively into the distance: the rebellious Everyman of Red Sox Nation. Both men wear their wedding rings. Arroyo wears his World Series ring.

The actual recorded output is no different in reflecting both the public image of each team and their contrasts with one another. Start with Arroyo. His record is a perfect blend of almost everything I hate: covers albums, the radio hits of the '90s and the Boston Red Sox. To run the table at my casino of horrors, all that remains is for "Covering the Bases" to blare from the jukebox at Jillian's as a belligerent B.U. frat brother drops a Rohypnol into the Sam Light of a B.C. undergrad in a pink Varitek T-shirt. But Arroyo's passion for the material he's covering is genuine. No one would resurrect the 1991 Pearl Jam-Soundgarden side project Temple of the Dog's "Hunger Strike" unless he truly loves how it represents "the combination of the Seattle grunge movement in it with Eddie [and] Chris," which is what Arroyo writes in the liner notes. The same goes for Pearl Jam's "Black," Stone Temple Pilots' "Plush," and Toad the Wet Sprocket's "Something's Always Wrong." What, no "Mmm Mmm Mmm Mmm"?

As with his pitching style, and his team, Arroyo is able to turn raggedness into a virtue. (This month, despite pitching what the Boston Globe called a "stinker" on Wednesday, he's dominated in four of his five starts.) The final track, an idiot-heavy version of the Standells' "Dirty Water," is an RSN wet dream, with Arroyo, Johnny Damon, Lenny DiNardo and Kevin Youkilis ranking on each other and screaming out "Boston, you're my home!" If he fails on the CD -- as opposed to his weak material failing, which it does again and again -- it's when he doesn't get raggedy enough. He doesn't strain his voice for the chorus of the Foo Fighters' "Everlong," which is the key to making the song, the only Arroyo choice on this album I like, work. (He cheats by relying on backing vocalist David Isaacs.) True to form, one of the idiots baits Yankee fans during the song's coda by mockingly chanting "Who's your daddy?" -- which, for the uninitiated, is what we taunted former Boston ace Pedro Martinez with every time he pitched at Yankee Stadium late last year. The heart is definitely there. If Arroyo decides next time around to forgo such God-awful material, he'll make a good record. As it stands, this is probably the best album of college-mook karaoke I've ever heard, but I never want to hear another one. There's a lesson in here about weak fundamentals.

Bernie Williams' fundamentals, famously, have never been great. He would make an awful idiot, since he's relied on sheer determination his entire career to make himself one of the best players to ever don pinstripes. (On Tuesday, despite a horrific loss in Baltimore, Williams surpassed Joe DiMaggio's hit total.) It shows on "The Journey Within." Bernie performs Latin jazz with undeniable verve, especially on tracks like the Béla Fleck-guested opener "La Salsa En Mi." Another original composition, "Desvelado," is a nice piece of upbeat and nimble guitar work, and while it's not great jazz, it's also not the fare you'd get on a Royal Caribbean cruise ship. But elsewhere the grind-it ethos shows its weaknesses. For some reason, Bernie attempts a cover of Kansas' turgid "Dust in the Wind," and his furious picking leads to several clipped notes at exactly the wrong points.

There's no doubt that Bernie is disciplined, but also no doubt that his effort can come up short. "Stranded on the Bridge" is an awful funk jam, and "Enter the Bond" is even worse disco. Although "The Journey Within" was released two years ago, it's hard not to listen to it today and be reminded of Williams' troubled season, which may well mark the swan song of his career. Yet he's capable of turning moments that should be saccharine into true sweetness. While Arroyo brings out his teammates for his final track, Bernie brings his children into the studio to sing over his otherwise unaccompanied guitar. On and off the field, that sort of grace is what got tens of thousands of fans at Yankee Stadium on Sunday -- possibly Williams' last home game -- showing their appreciation. My mother, who was there, shouted, "THANK-YOU, BER-NIE," through sobs.

Neither of these records is much good. That's strangely appropriate, given that neither the Yankees nor the Red Sox has played the sort of ball this year that makes them particularly proud. On repeated listens, much like with repeated reviews of the 2005 season, the missteps become pronounced, but so do the strengths that shine through. And there, the advantage has to go to Bernie Williams. Unlike Arroyo, Bernie started most of this massively flawed album with a blank sheet of music paper. Where he succeeds and fails, he does it based on his own compositions, showing the bravery that New York fans have recognized in him since his rookie year in 1991. If these albums are any indication with these two evenly and bitterly matched teams, it'll be the Yankees who make it, by the skin of their teeth, to the postseason. (Arroyo's big loss Wednesday helps, too.) Thank-you, Ber-nie.

Spencer Ackerman is an associate editor at the New Republic.