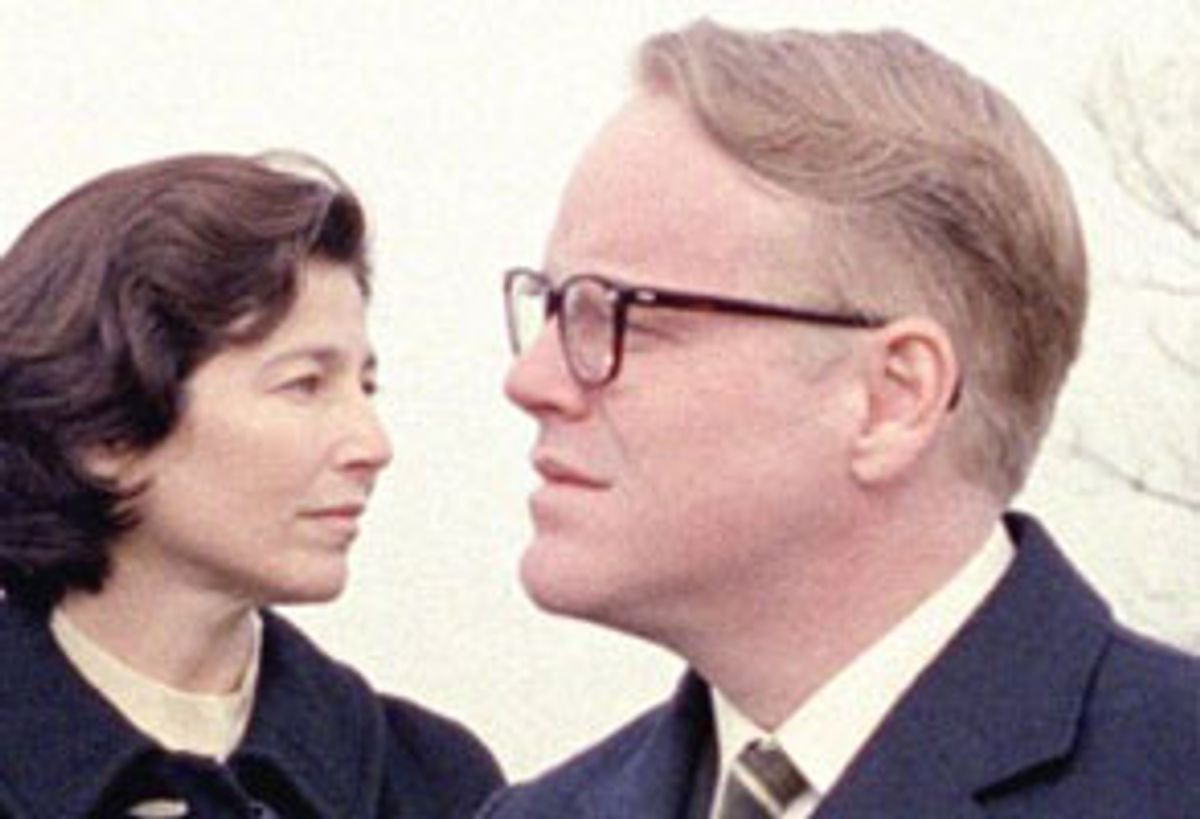 Bennett Miller's "Capote" is an exceedingly somber picture, a serious-minded and morally scrupulous account of how Truman Capote turned the story of a horrific small-town murder into the first nonfiction novel. By the time "In Cold Blood" finally appeared, in January 1966 (it had been serialized in four issues of the New Yorker the previous fall), Capote had devoted six years to it, and while it made him a huge celebrity, it also ground him down emotionally. "Capote" is a biopic that deals with just one sliver of a great writer's life, but it's a crucial sliver. And while the filmmaking overall suffers from a kind of tasteful, low-key blandness, Philip Seymour Hoffman's portrayal of Capote keeps the blood coursing through it. He's the bright, chilling spot of color at the center of an otherwise beige movie.

Capote got the idea for "In Cold Blood" from a small article in the Nov. 15, 1959, New York Times, detailing the murders of a wealthy Kansas farming family, the Clutters. The Clutters had been killed by shotgun blasts at close range; there was no apparent motive for the murders, and at that point, the killers were still at large. Miller shows Capote cutting out the article with painstaking care, like a child fixated on a glittery something, and dialing New Yorker editor William Shawn (Bob Balaban): Would he be interested in letting Capote write something on the murders? Capote, intrigued by the fact that the murders were an as-yet-unsolved mystery, was simply interested in finding out how the crime had affected people in the small town of Holcomb, Kan., where the Clutters lived.

Shawn gives Capote the go-ahead. And so with his friend Harper Lee (Catherine Keener), whose own hugely successful book is on the verge of being published, Capote leaves New York for Kansas, where, after an initial period of wariness, the locals -- including Kansas Bureau of Investigation agent Alvin Dewey (Chris Cooper, in a performance that defines the spirit of masculine decency) -- eventually warm up to him. When the killers are apprehended, late the following month, Capote becomes even further consumed by the story: His relationship with the murderers, Richard Hickok and Perry Smith (played here by Mark Pellegrino and the superb Clifton Collins Jr., whose features shift between heart-rending openness and steely emptiness), begins with simple questioning and evolves into an obsessive, exhausting emotional tangle.

"Capote" is based on Gerald Clarke's 1988 biography (the screenplay was written by Dan Futterman), and even if Miller's filmmaking style is austere to the point of flatness, it does allow lots of room for the actors to shine. Bruce Greenwood plays Capote's longtime lover Jack Dunphy, and in his relatively few scenes manages to convey the jumble of affection and frustration that Dunphy must have felt for Capote. And Keener is a grounding presence in the movie, playing a woman who offered deep friendship to Capote but who was also appalled and dismayed at his callousness. At one point Capote reads her, over the phone, a painfully sincere entry from Smith's diary, playing it for laughs. Lee cuts him short, letting him know that he's crossed a line, a moment that Keener plays with stringent urgency: She can't bear her friend's lack of compassion, and she calls him on it. Keener even looks slightly different in this role: With her bobbed hair and scrubbed-fresh skin, she resembles a young Patricia Neal.

But "Capote" is, of course, Hoffman's movie: He pulls off the astonishing feat of playing a likable character who's not exactly a sympathetic one. During the course of his questioning of the killers -- he also corresponded with them regularly by mail during the exhausting four and a half years between their arrest and their execution by hanging, in April 1965 -- he falls into a kind of love with one of them: Capote's relationship with Smith, as it's portrayed here, is a cruel, unnervingly intimate game.

Capote brings books and small gifts to Smith in prison, claiming to be -- and, in some ways, attempting to actually be -- his friend. He needs to earn Smith's trust to get his story, and he allows Smith to believe that the book he's writing will exonerate him. There's a wrenching sequence in which Smith, having learned that the book is to be called "In Cold Blood," confronts Capote. He's hurt and angry at this betrayal, but Capote soothes him with a slippery lie. Hoffman plays the moment perfectly: He shapes it so we feel sympathy for the killer, not the writer.

"Capote" makes no bones about the fact that Capote "got" his story partly as the result of his charm and intelligence, and partly by sheer deceit and cruel manipulation. The movie is both ruthlessly critical of its subject and unabashedly affectionate toward him, and Hoffman hits every note so it rings true. His portrayal of Capote is a brilliant impersonation -- he even captures Capote's laugh, the way he'd keep his teeth primly covered by his lips -- yet he never loses sight of the human being behind those mannerisms.

At one point, early in the picture, Capote and Lee are trying to get a Holcomb teenager (the girl who discovered the bodies of the Clutters) to talk about her relationship with the family. She's understandably reticent, not knowing what to make of these slick oddballs from the big city. Hoffman's Capote looks at her directly and dissolves her wariness with a confession of his own: "Ever since I was a child, folks have thought they had me pegged -- because of the way I am, the way I talk. And they're always wrong -- you know what I mean?"

Hoffman delivers the line as a plaintive expression of painful fact. But it's also a card he plays at just the right moment. "Capote" is a portrait of a fiercely sharp, funny man, but it doesn't necessarily give us a sense of the wonderful, lyrical writer that he was. Then again, all of that lives on, in the words he left behind on the page. "Capote" is an examination of the way a writer can sometimes fall between the lines, fooling himself into thinking that betrayal constitutes a kind of love.