Ashley Smith was sainted by conservatives for reading "The Purpose-Driven Life" to her captor. Now she admits to also giving him crystal meth. 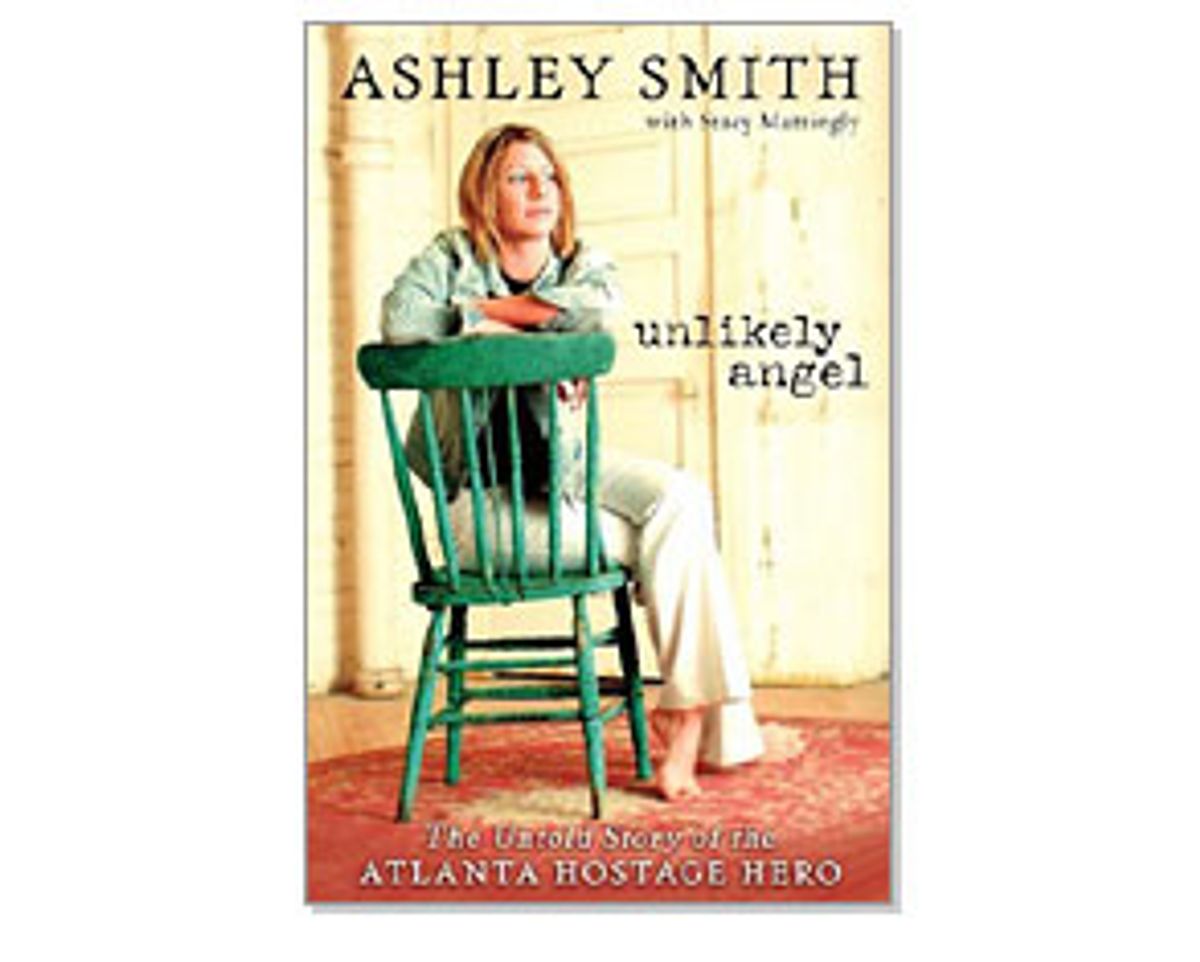 Last March, the media devoted days to the tale of a young Atlanta woman who'd negotiated her way out of captivity at the hands of a fugitive murderer. It was a gripping story that was impossible to ignore. And with the moral-values hullabaloo of Election '04 still echoing nationwide, religious conservatives levitated the story to the realm of fable.

Ashley Smith, a 27-year-old widowed mother with a young daughter, had been taken hostage in her own apartment by Brian Nichols, an African-American man who had fled from an Atlanta courthouse where he'd just shot and killed four people, including a judge. Round-the-clock coverage focused on how, during her ordeal, Smith pulled out Rick Warren's mega-selling evangelical book, "The Purpose-Driven Life," and read to Nichols from a chapter called "Using What God Gave Me" to gain his empathy and trust. He eventually let her go, and she alerted the authorities, who arrested Nichols without incident.

"I think God gave this young lady a supernatural empathy and compassion for someone that most anybody else would have tried to kill," the Rev. H.B. London, a vice president for ministry at Focus on the Family, said back on March 16. "Every Christian organization in the country will want to tell her story."

"The power of family and faith was never more apparent in action than in [the] news story of Ashley Smith," Larry Jacobs, vice president of the Howard Center for Family, Religion & Society in Colorado, said in a press release then.

"The only thing that helped Ashley Smith get through an over-seven-hour ordeal where quadruple-murder suspect Brian Nichols held her hostage was her faith in God," announced Fox News.

Her faith wasn't the only thing, as it turns out. This week, with the release of her memoir, "Unlikely Angel," Smith admits that she earned Nichols' confidence by offering him a dip into her stash of crystal methamphetamine. Nichols, Smith says in the book, didn't know what "ice" was, or how to take it. "You don't have to smoke it," she recalls telling him. "You can hot rail it or snort it." She cut it up for him herself, using a plastic supermarket card and a $20 bill. Smith didn't tell police investigators, or the media, about the meth until months later.

Today, Smith says she kept the meth a secret from the cops not so much for fear of prosecution as for fear of her family's reaction -- they didn't know she was back on drugs at the time and had thought she was doing much better.

In March, the media reported that Smith had struggled with addiction for years prior to the hostage ordeal; according to her updated account, she refused to do drugs with Nichols that night. Offering meth to Nichols, she says, was a gut reaction. He'd asked her for marijuana but she didn't have any. "I was trying to cooperate with him in every possible way and that just came out when he asked for a drug," Smith said in an interview with Salon. "I knew the way it had totally just made my mind go crazy, so yes, I was completely scared that's how he could react."

She admits she'd had experiences of psychosis while high on meth herself, causing her to hear voices and crash her car, leaving her body scarred. But in the fear of the moment with Nichols, she didn't have time to think about supplying crank to a deeply disturbed, heavily armed fugitive.

Smith says that after giving Nichols the meth, it "just totally mellowed him out. He just kind of sat there, like he was deep in thought." That made sense to her. "[Meth] made me do things at a fast pace, but it still would get me thinking in deeper thought. Things kind of hit home a little more." It was after Nichols was high that she began reading to him from Warren's book.

Georgia authorities have said they won't go after Smith. There was no evidence of illegal drugs other than her videotaped statement, said Gwinnett, Ga., District Attorney Danny Porter on Wednesday -- not enough for a prosecution. And Smith will still get $70,000 in reward money from authorities for helping to capture Nichols.

Case closed, technically speaking. But what about for the chorus of conservatives who back in March nominated Smith for sainthood? These are the same folks who tend to advocate locking up drug users and throwing away the key. Not only did Smith still have an illegal stash back then, she lied about it by omission.

Among opinion makers, no one was more vocal in the campaign to sanctify Smith than Wall Street Journal commentator and former Ronald Reagan speechwriter Peggy Noonan. "It is an amazing and beautiful story. And for all its unlikeliness you know it happened as Smith said," Noonan wrote in her March 17 column. "You know she told the truth. It's funny how we all know this."

For Noonan, the story went beyond an intuitive sense of Smith's honesty. "The more the news played the testimony of Ashley Smith, the more each news show came to seem elevated, ennobled," Noonan continued. "The past few days the TV screen has been filled with some wonderful light ... Ashley Smith is a national hero -- a brave, resourceful single mother who has suffered in her life, and who at a series of pivotal moments did the right thing and the kind thing and helped a killer end a killing spree. Country songs will be written about her. She's going to enter our folk lore."

Noonan now says that the meth revelation doesn't alter her admiration for Smith. "If you could talk a murderer out of mayhem by keeping your wits about you and reading to him from a religious tract, I'd salute you too, no matter what the facts of your past or present life," she says. Noonan also pointed to what she says is the "polar thinking" typical with a story like Smith's. "Life is complicated and so are people." And she says she thinks "conservatives will be less shocked than liberals" by Smith's revelations, maintaining that there's a wide spectrum of conservative opinion on dealing with drug addicts nowadays. There are "a heck of a lot of people who've been touched one way or another by the drug problem" in America, Noonan says.

Still, the Rev. London and Focus on the Family appear less eager to tell Smith's story now; multiple calls from Salon requesting comment were not returned. Jacobs, of the Howard Center for Family, Religion & Society, also declined to comment.

For her part, Smith says she's wary of being made a hero by conservatives. "I'm not really much into politics," she says. "They were quick to call me an angel, but from the beginning I was very uncomfortable with that. I'm not the perfect girl they saw, and it's important that people know that. They can make their judgments on me now, and I know they will."

Aside from unlikely sainthood, Smith has had to contend with some other exploitative impulses among pundits and the press. After hearing about her remarkable bonding with Nichols back in March, some red-staters questioned whether Smith hadn't "loved her enemy" in the biblical sense. It was an absurd charge that set off another round of absurd voices to defend her.

"I think God was in that apartment with them," said Rush Limbaugh during his March 14 radio broadcast. "I think God was in there and I think there's no question, you cannot dispute there was a bond. There was a bond between these two, but I think it's a mistake to think that it's the kind of bond that leads to conjugal love or a relationship or dating or anything like that. It's far above that. Far, far, far above that, folks."

But Smith's publishers don't seem to be giving her much help here, as the book, coauthored by a writer named Stacy Mattingly, seems to play up the sexual angle, and even exploit the age-old taboo of interracial sex. "He unbuttoned the blazer and took it off, hanging it on the left-hand post at the foot of my four-poster bed," it reads. "Glancing up at him without a shirt on, I thought, 'This guy is huge. I guess they really do work out in jail.' He looked like a linebacker. He didn't have an ounce of fat that I could see; he was cut everywhere. I looked away as he turned back to me."

Next comes a scene in which Nichols says, "I like your style," while Smith is cutting up the lines of meth for him on the bathroom counter. "Have you ever dated a black guy?" he asks her. "No," she replies, and then Smith spends a paragraph recalling that possibility from her high school days.

Smith says despite what others have said about her, and regardless of how she's been packaged by her publisher, "I did what I had to do to get out of there alive, and honestly I believe that God gave me all the tools I needed to get through it. And I honestly believe some of them were not so good," she adds. "He used my past to help me."