Nobel laureate Coetzee takes a simple plot -- an aging, injured man falls for his nurse -- and spins it into a postmodern meditation on desire and humanity. 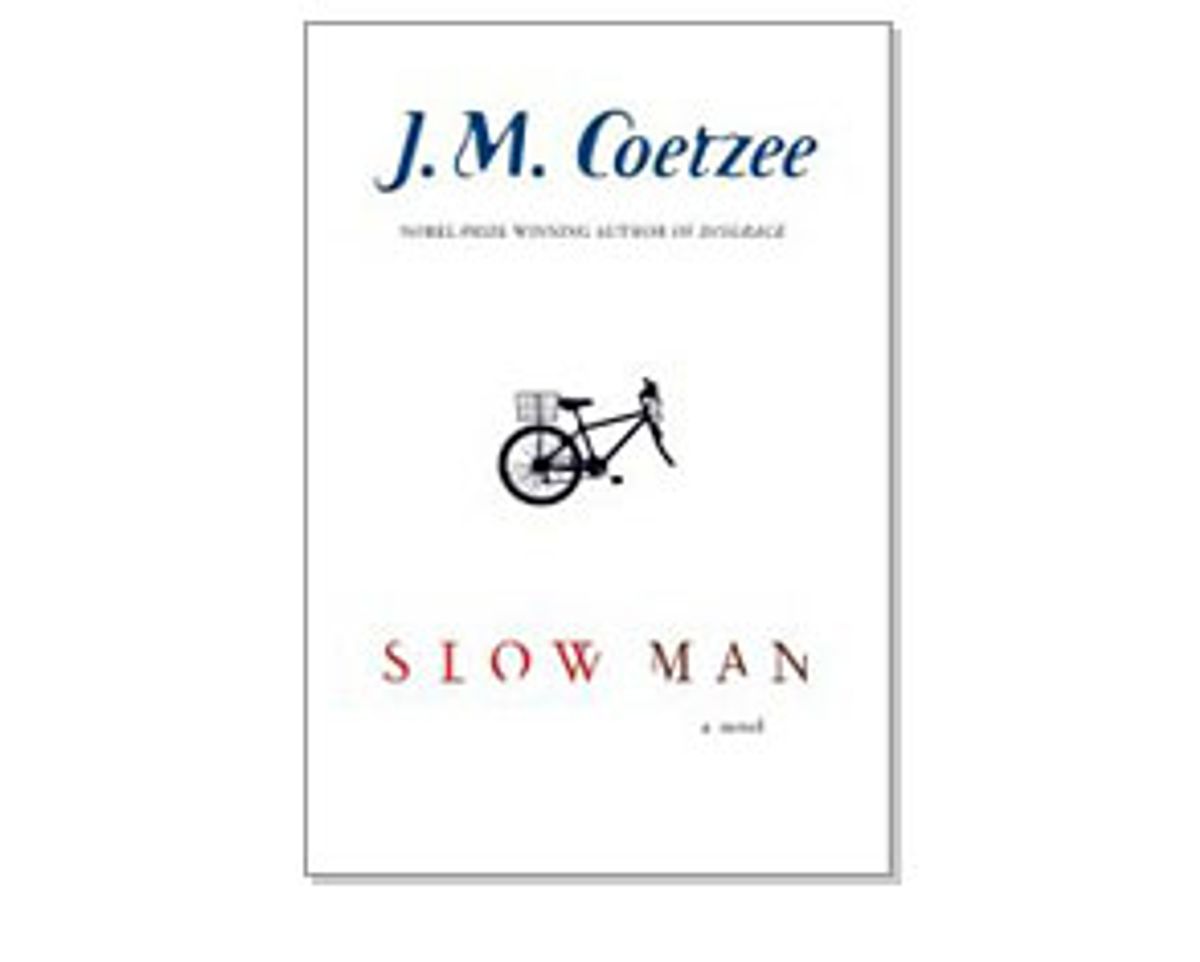 "Slow Man," the new novel from South African Nobel laureate J.M. Coetzee, opens on a glorious Australian morning. Sixty-year-old Paul Rayment is out on a bike ride when a young man in a car hits him, sending him flying through the air, and then smack down onto the pavement. Within the book's first pages, Rayment is taken to the hospital, where he drifts in and out of consciousness before discovering that his leg was not only destroyed in the accident, but has been amputated just above the knee. A doctor tells him that he is lucky -- it could have been much worse.

Rayment is sent home fairly quickly after his surgery, but because this is a Coetzee novel, what follows is not a tale of coming to terms, of adaptation, of a cranky, stubborn man who finds a new lease on life after nearly losing it. To be sure, Rayment is stubborn, but not in any amusing way. He steadfastly refuses to accept what has happened to him, let alone consider wearing a prosthesis and learning again to walk; he stays indoors, and grows gloomy. He hires a day-nurse, Sheena, but "he does not like any of the temps -- does not like being treated like a child or an idiot, does not like the bouncy, cheerful voice they put on for him." That is, he doesn't like the temps until Marijana, a Croatian immigrant, arrives to nurse him.

Rayment is an unremarkable man. Divorced, with no children, he lives in a flat filled with the previous owner's furniture. He is French, but grew up in Australia; as an adult, Rayment tried to repatriate himself to his birth country but found it unwelcoming, and returned to his adopted nation to take photos and begin collecting old images of native Australians, those families and workers who, unlike him, are rooted to a particular place. Rayment seems to have always been incapable of joy, but it's even worse after the accident so Marijana arrives to a particularly dark situation. But when she treats him like a man -- she does not talk to him as if he's a child -- respects him, dusts his books, washes his "stump," parts of him wake up, and he falls desperately in love with his nurse.

There is no real affair between them, but "Slow Man" follows Rayment's descent into desperation; his ardor increases for Marijana, even as she senses it and pulls away. (His efforts to keep her on, and to win her heart, mostly involve promises of money.) Only a writer like Coetzee -- who doesn't want you to care about his characters so much as observe them, take in their humanity -- could make this story of a passive, aging man who desires his housekeeper interesting. Rayment's story is sad, and reading this novel will make you feel profoundly sad -- which has a lot to do with Coetzee's ability to write in a prose so spare that the absence of embellishment inspires more despair than does the plight of Paul Rayment. There is air in each line -- have I ever read such unadorned sentences? -- but that air is thick, and weighs heavily.

Still, it seems that even Coetzee may have doubted whether the decidedly average Paul Rayment was enough to hang an entire novel on. To assist, about halfway into the book, Elizabeth Costello appears; she is a novelist -- as well as the eponymous heroine of an earlier Coetzee book -- who shows up randomly to keep the plot moving along. She imposes on Rayment, staying in his house only semi-invited, watching him and Marijana. Rayment's passivity irks her, so she contrives various scenarios to get him to act, to behave with some agency in his own life.

Costello finagles a sexual tryst for Rayment and pushes him to confront Marijana over an issue with her son (who Rayment, childless, begins to wish were his own) -- she's like a puppetmaster. Mostly, though, she is an irritant. Rayment is constantly trying to get her out of his hair -- he says, shaking his head, "I don't know what you want," and she responds, "Push!" Rayment suspects that she has arrived in order to study him, study all of them, and put them into her next book, and he finds notes on a desk that seem to confirm it. She claims only that "When I came knocking at your door ... I came to find out what happens when a man of sixty engages his heart unsuitably."

Throwing Elizabeth Costello into "Slow Man" is a clever move, and the kind of postmodern trick that could drive some readers mad. But for fans of Coetzee's recent work -- not just "Elizabeth Costello" but the Booker Prize-winning "Disgrace," too -- this novel is a welcome addition to a unique oeuvre. As Coetzee gets older himself and shifts focus from his homeland of South Africa and the legacy of apartheid to other things (including animal rights and, more important, aging) we have a lot to look forward to. Still, I must admit that I hope this is the end of Elizabeth Costello -- she seems like a rather intrusive houseguest.

Our next pick: An ambitious novel from the author of "Bee Season" about love, life, loss -- and the flu