"On Beauty" by Zadie Smith

From the author of "White Teeth" and "The Autograph Man" comes an extraordinary academic comic novel in the tradition of "Howards End" that bursts with imagination. 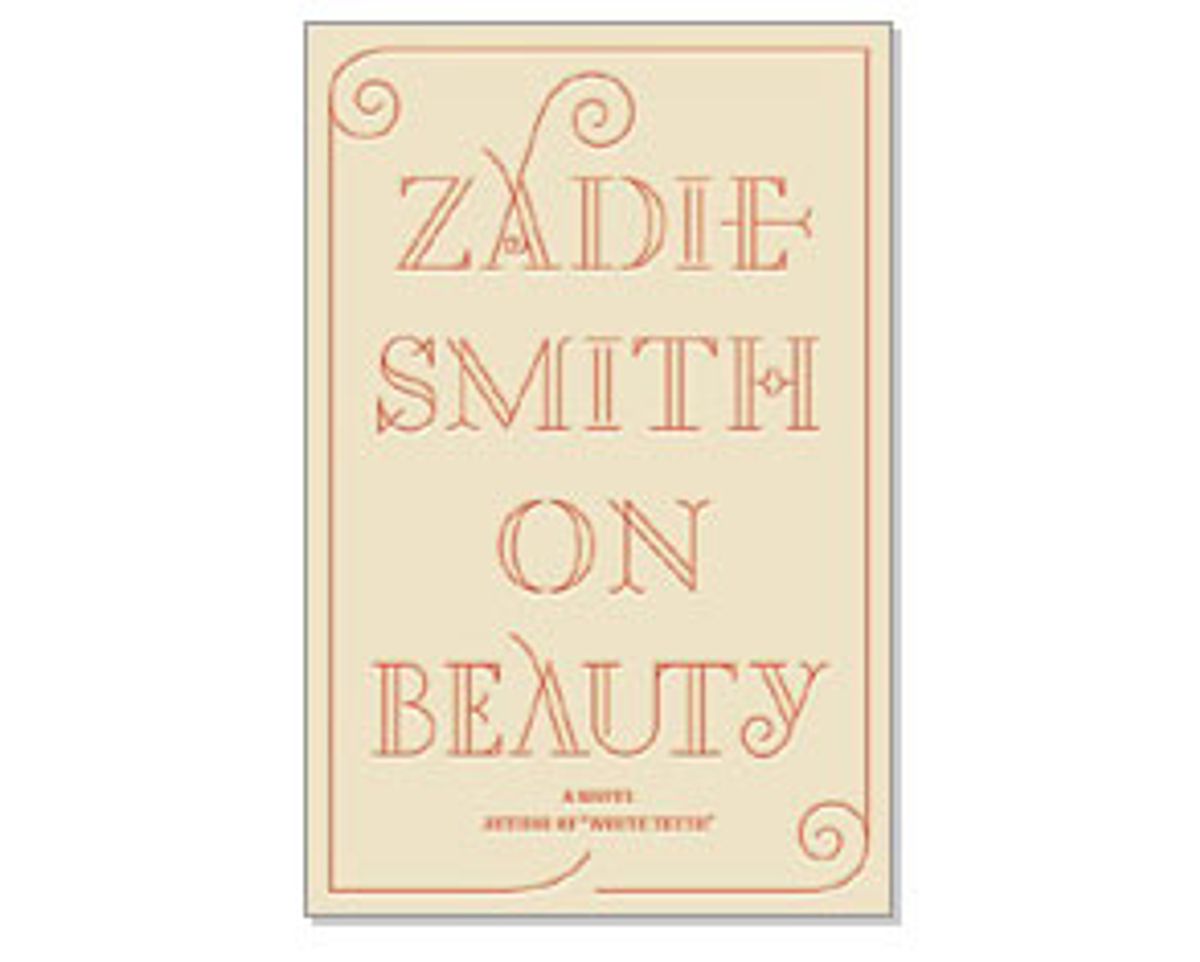 Academic cultural critics -- who get a few taps on the snout in Zadie Smith's new novel -- often say that works of art can only be fully understood in their historical context. It may well be that "On Beauty" feels like a revelation because it arrives toward the end of a year of uniformly drab, if occasionally accomplished novels. The chronically self-deprecating Smith would, of course, make no grand claims for her book. "On Beauty" belongs to the well-established genre of academic comic novels, and it's openly a riff on "Howards End" by E.M. Forster, a writer she's described as her first literary love. Nevertheless, to the mere reader, plunging into "On Beauty" feels a lot like being Dorothy in the film version of "The Wizard of Oz," stepping from the black-and-white Kansas of 2005's ephemeral literary offerings and into the Technicolor of Oz. This one is a keeper. It's the kind of book that reminds you of why you read novels to begin with.

"On Beauty" is the story of two families, headed up by academic men who are each other's opposites and enemies. Howard Belsey, a white Englishman teaching at a Massachusetts university, represents the end of the line of an austere theoretical project: The big book he's been puttering on for years is meant to demolish the sacred reputation of Rembrandt and to indict "prettiness as the mask that power wears." Monty Kipps, a black Englishman of Caribbean descent, is the kind of right-wing iconoclast beloved of Op-Ed page editors, a mix of V.S. Naipaul and Stanley Crouch. Kipps' book on Rembrandt, laden with conventional wisdom and the romance of "genius," is, unlike Howard's specialist study, designed "to sit heavily atop the New York Times bestseller list for half a year, crushing every book beneath it."

Howard is more or less the novel's central character, so it's an extraordinary and significant aspect of "On Beauty" that Smith has given him ideas she doesn't endorse. She recently told an interviewer that she admired Rembrandt because "He's so meaty, his people have such big noses, everybody's so fleshy, and his work is so full of love." That last phrase, when I read it, startled me; "so full of love" is exactly how I'd described "On Beauty" to a friend only hours before. Although this is a comic novel and, at least in part, satirical, it's unlike any other satire I've read in that it's completely free of contempt. Smith is Rembrandtian (and, for that matter, Shakespearean and Tolstoyian) in her inexhaustible interest in and sympathy for even her most disagreeable characters. Although the purview of "On Beauty" seems small, it is forever blowing out its own boundaries with little explosions of imagination and curiosity, opening up new vistas onto the circumscribed yet infinite worlds that lie inside other people.

The ideological battles between Howard and Monty (who in the course of the novel comes to work at Howard's university) may sound, in this polemical age, like the meat of the matter, but they're only a foil. Howard's marriage to Kiki, an African-American hospital administrator, is the real substance here. After 30-some years of happiness and the raising of three children, now nearly grown, this admirable partnership has begun to falter. Howard has had a shadowy affair before the book begins, and he will blunder into another with a much younger woman before it ends, but he loves his wife. Kiki, once the possessor of "an extremely neat waist," has found herself in a 250-pound body that strikes her as "a strange fabulation of the person she believed she was." Their children are Jerome (a Christian, much to his father's exasperation), Zora (an academic go-getter who "lived through footnotes") and Levi (a sweet-natured aspirant to hip-hop street cred who speaks with a Brooklyn accent despite never having set foot in the place).

A complicated and diverting plot ensues, but it's each stroke in the impasto of character that makes "On Beauty" so endearing. Kiki, for example, whenever she feels a flush of parental success, has running in the back of her head an "imaginary speech to the imaginary guild of black American mothers: And there's no big secret, not at all, you just need to have faith, I guess ..." Levi, amid the preparations for his parents' anniversary party, "sensed women getting ready all over New England: undressing, washing, dressing again, in cleaner, sexier things; black girls in Boston oiling their legs and ironing their hair, club floors being swept, barmen turning up for work, DJs kneeling in their bedrooms, picking out records to be placed in their heavy silver boxes -- all of which imaginings, usually so exciting to him, were made sour and sad by the knowledge that the only party he was going to tonight would be full of white people three times his own age."

Zora stands on a street corner making gossipy witticisms as a hedge against youth's uncertainty for a group of students who "guffawed, pretending to a worldliness none of them had earned ... They were smooth and bright, and their timing was wonderful, and they were young and hilarious. It was really something to see, they thought, and this was why they spoke loudly and gestured, inviting onlookers to admire." The Kippses, mourning the loss of Monty's wife, feel a "livid disbelief. In every other walk of life when the Kippses were hurt they were given access to recourse: Monty had fought three different libel cases; Michael and Victoria had been brought up to fiercely defend their faith and their politics. But this -- this could not be fought. Secular liberals were one thing; death was another."

All of the above are greater or lesser examples in a catalog of human folly, but none are depicted without compassion and a certain measure of delight in their vibrant particularity and underlying universality. Perhaps the most masterfully executed is Howard's much-longed-for tryst with a beautiful young student, a girl who delivers a joyless and (for Howard) baffling performance of pornographic enthusiasm; it must be the saddest and most hilarious sex scene anyone has written in years: "He had the sense that every time he touched an area of her body that area was at once moved out of his reach and then returned to his hand a moment later, restyled."

An insensitive reader could mistake the pertinence of "On Beauty" for didacticism; as proof against this stands that novel's refusal to resolve itself easily or in the theatrics that concluded Smith's early books, "White Teeth" and "The Autograph Man." Howard does eventually muddle through to an understanding, but it is both liberating and crippling. Beauty is both powerful and helpless, the university both precious and hellish, ideas both essential and superfluous, people both funny and tragic. Love, the guiding principle of this and all of Zadie Smith's fiction, is as blind as the proverb declares, but in its blindness, it sees everything.

Our next pick: A trickster god, a karaoke bar and a guy named Fat Charlie