In "Female Chauvinist Pigs," Ariel Levy asks why so many young women today have embraced a raunchy, porn-drenched sexuality 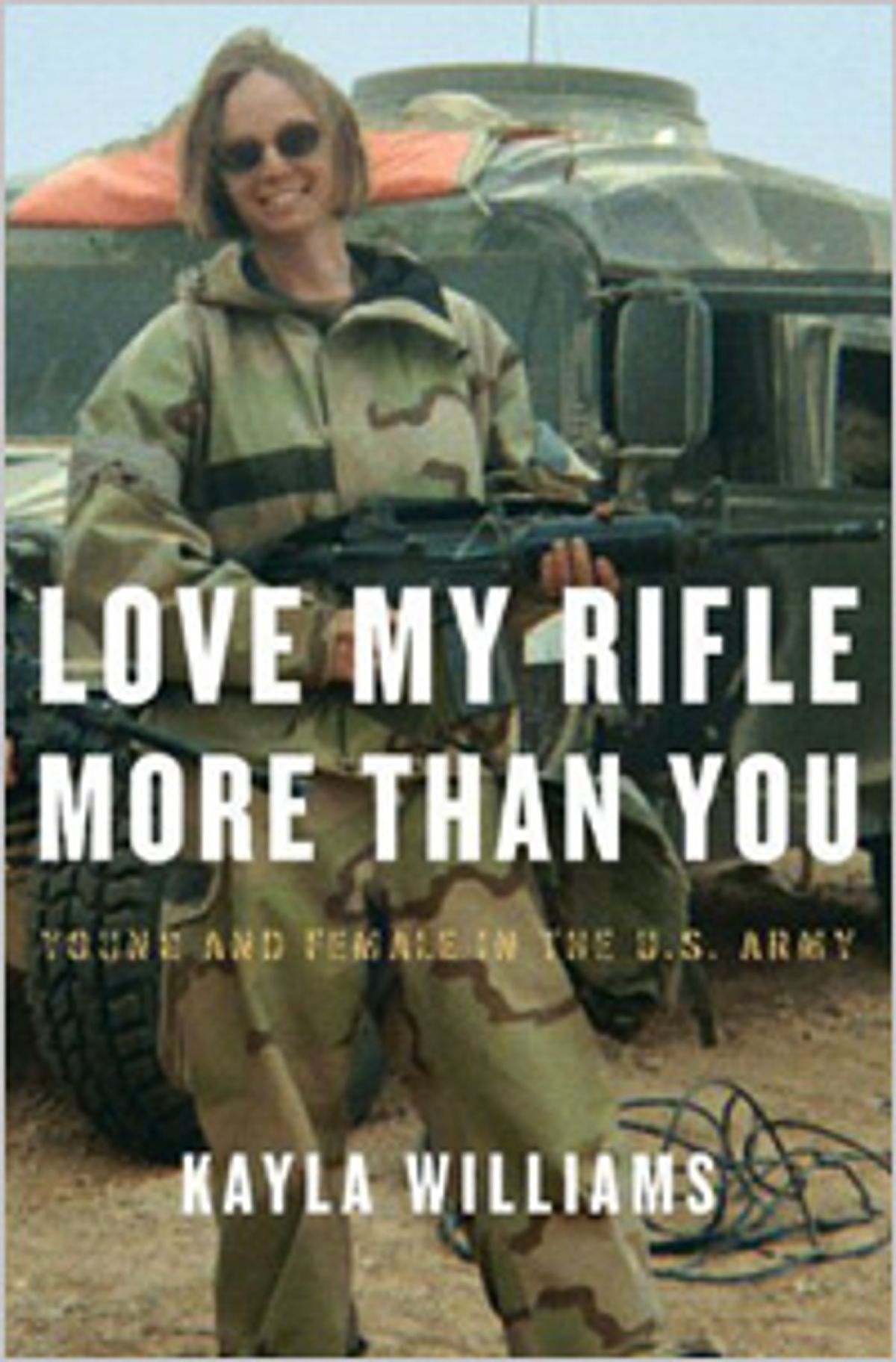 A quick glance at the T-shirts ought to be enough of a clue that all is not well in American mass culture. Girls no more than 14 saunter down the street with their low-riders jammed down below their thongs and, snugly fitted over their brand-new breasts, piquant words of wisdom: "Everyone loves a Jewish girl." "What boyfriend?" "Save a Horse: Ride a Cowboy." A picture of a rooster above the word "Tease."

In another life, wearing a garment advertising the favor you wish to do the cowboys of the world might be degrading or, at the very least, embarrassing. In another life -- say, in a radical feminist compound of the future where no men exist and we rely on frozen sperm for breeding -- it might be ironic. In this one, it is simply the thing to do.

Levy traces the ascendancy of this peculiarly porn-tastic culture to the ashes of the feminist movement, which famously split 30 years ago into "sex-positive" and anti-porn camps. People like Candida Royalle fled, frustrated that an emphasis on the politics of sex had done away with its pleasures (Royalle went on to direct adult films for women), while the likes of Andrea Dworkin and Catharine MacKinnon became anti-porn crusaders. Both sides believed they were radically sex-positive/pro-sex, but saw the conditions for sexual liberation in radically different ways. Levy defines "raunch feminism" as the legacy of the unresolved contradictions between the two sides, as well as the continuation of rebellion against uptight movement mothers. Only instead of supplementing political lobbying or social work with sexual liberation, these days we believe that the work ends with sex. As Erica Jong, whose "Fear of Flying" advocated the enjoyment of consequence-free sex for women, says to Levy, "Sexual freedom can be a smoke screen for how far we haven't come."

The picture that Levy paints is more than a little grim: raunch culture, which is essentially misogynist, callow, simplistic and ubiquitous, breeds women-hating-women who angle for power with men and propagate more raunch under the deceitful guise of feminist empowerment. Thus women are burdened with the usual demands to be sexy, come hither, and look like you want it -- only now, "because we have determined that all empowered women must be overtly and publicly sexual, and because the only sign of sexuality we seem to be able to recognize is a direct allusion to red-light entertainment, we have laced the sleazy energy and aesthetic of a topless club or a Penthouse shoot throughout our entire culture." In this way, the dominance of raunch has superseded all other sexualized behaviors, creating lesbian bois who fuck and chuck one-night stands and straight girls who test their dates' mettle by bringing them to strip clubs.

Levy goes further. "In this new formulation of raunch feminism, stripping is as valuable to elevating womankind as gaining an education or supporting rape victims," she writes. "Throwing a party where women grind against each other in their underwear while fully clothed men watch them is suddenly part of the same project as marching on Washington for reproductive rights." This unlikely feat is possible because in 2005, there's no consensus on what feminism, or a feminist, is -- there are S/M feminists, radical lesbian feminists, NOW and Planned Parenthood feminists, even some pro-lifers who call themselves feminists. While the big-tent approach to feminism has created space for everyone, it has also allowed for conservatism, exploitation and commercialism to pollute women's hard-won gains.

The biggest lie of pornography's ascendant place in American culture is the notion that it has somehow made us all more free. Levy looks for the "new feminism" in raunch culture -- for the proof of freedom and power -- but all she finds is the "old objectification." What's unusual in her telling, though, is that women today have only themselves to blame. They produce HBO's "G-String Divas" and work for "Girls Gone Wild"; they gobble up porn diva Jenna Jameson's book; and if they don't audition for Playboy's 50th anniversary casting call, they read the magazine, which is run by a woman, too.

Playboy empress Christie Hefner, Hugh's daughter, sees no contradiction between her stable of bunnies and the two women's organizations -- Emily's List, a fundraising tool for pro-choice candidates, and the Committee of 200, a mentoring and scholarship group -- she founded. She identifies the increased female readership of Playboy as a sign that "the post-sexual revolution, post-women's movement generation that is now out there in their late twenties and early thirties ... has just a more grown-up, comfortable, natural attitude about sex and sexiness that is more in line with where guys were a couple generations before." (Because of course admiring someone wearing a tail who's serving you cocktails is natural, not to mention grown-up.)

For some women -- those who are turned on by other women, for example -- the license to consume Playboy is unquestionably an advance; for others, though, you might wonder what they get out of page after page of identical bodies with identically parted lips. For instead of celebrating the diversity not only of shapes, but of desires, Playboy and its kin have commodified female sexuality into a series of recognizable poses that have been reproduced and repeated until they are now the very definition, the only definition, of sexiness. Hefner argues that female Olympians posed in Playboy as a way to tell the world that they "don't think that athleticism in women is at odds with being sexy." Interesting then, that to prove their sexiness, these athletes posed as soft, sedate pin-ups, not in action on the court.

Critiquing -- let alone complaining about -- pornography has become very old-fashioned and, worse, a real killjoy. Better to become a "female chauvinist pig," to mimic men -- have casual sex, check out girls, show a little skin of your own. (Of course, unlike their male heroes, female pigs still "parade around in their skivvies as a means to attaining power.") An FCP, in Levy's definition, "is funny. She gets it. She doesn't mind cartoonish stereotypes of female sexuality, and she doesn't mind a cartoonishly macho response to them. The FCP asks: Why throw your boyfriend's Playboy in a freedom trash can when you can be partying at the Mansion? ... Why try to beat them when you can join them?"

Levy talks to Erin and Shaina, two sisters who have a pile of magazines like Playboy and FHM on their bedroom floor (they share a room at their parents' place). Erin's been known to make out with another girl in public cause it "turns guys on." (She thought it would be like being on TV, but the real experience wasn't as sexy as in her fantasies.) Shaina thinks that getting your ass slapped at a bar by a stranger isn't harassment -- just flattery. Although Erin feels "conflicted being a woman" and tries to "join the ranks of men," she owns a copy of "The Feminine Mystique" -- but she would never try to push her ideas on someone else. The meaning of feminism for today's FCPs is a private affair. Another FCP, Anyssa, a struggling actress, likes to fantasize about what it feels like to be a stripper, with dozens of eyes on you. When Levy suggests that stripping was more a parody of female sexuality than an enactment of it, Anyssa's friend Sherry snaps. "I can't feel sorry for those women," she said. "I think they're asking for it."

Ultimately, FCPs want power. They equate power with being like men, and being liked by men. They're the kind of girl who's always felt more comfortable with boys, who doesn't really like other girls. Raunch is one way for them to gain access to that circle of men and to separate themselves from other women. Annie, for instance, used to enjoy Howard Stern because "it's humor masking a pretty woman-hating thing -- which I've got a good amount of in me, I guess, because I take pleasure in it."

"Yeah, we're all women, but are we supposed to band together?" asks Anyssa. "Hell, no. I don't trust women."

Yet as Levy points out, being the exception that proves the rule -- the girl who gets raunch, who laughs at Howard Stern -- just means the rules are still intact. As long as "acting like a man" is valued, acting like a woman will be devalued. And regardless of how you understand gender, being a woman -- having breasts, bleeding once a month -- will be a handicap.

But are we? It's clear that "we" live in a culture permeated by raunch and pornography -- at least white women do. Levy doesn't take account of black, Asian or Latino culture. She doesn't look at booty shakers pouring champagne on themselves, dripping with gold on the music videos on BET, or thumb through "Confessions of a Video Vixen," the bestselling book about a hip-hop video dancer. She doesn't think about Japanese anime and manga, with their double-D heroines. After second-wave feminism was accused of being a white movement, women of color assumed an important position in academic and activist debate. "We" could have a lot to teach each other about the ways that we are uniquely, and commonly, misused across media. "Female Chauvinist Pigs" ignores that possibility.

It also neglects any mention of class. Male-identified FCPs are financially successful. Even if they're not at the top of the ladder, if they're bartenders or registered nurses, they're not struggling to get by. They would never be forced to strip for money, for instance, which is one reason it's easy for them to dissociate themselves from women who do. So you have to wonder why Levy doesn't take the time to interview strippers or sex workers. She quotes Jenna Jameson, but she doesn't get an analysis of raunch from the perspective of an actual sex worker. Presumably such a thing falls outside the scope of her subject matter, but you'd think that a G-string diva would have an idea or two of her own on her new role as cultural heroine.

Raunch, whether or not we like it, is tangled and complicated, fraught with pleasure, voyeurism, mimicry, excitement, revulsion, exploitation -- a whole host of contradictory impulses. (There's a reason this stuff tore the women's movement apart.) But all is not a matter of false consciousness. Many women are savvy enough to recognize those contradictions and see through the charade that is broadcast into their lives 24 hours a day, seven days a week. The ways that they consume and digest endless streams of newspaper stories, television shows, magazine covers, books, advertising campaigns, billboards and Internet pop-up ads would have been worth investigating. After all, being a woman faced with infinite images of other women taking their clothes off, gyrating, tittering, moaning and pushing product can be exhausting and demoralizing. (Shockingly, there are those rare mornings that the New York Times online goes down better without the Victoria's Secret pop-up ads.) Raunch, like so much of mass culture, is both out of our control and impossible to ignore. We must develop a smarter strategy for living with it than simply wishing it would go away.

Levy's book diagnoses, but it doesn't prescribe. After carefully documenting the sale of female sexuality, Levy closes with the call for readers to believe they are "sexy and funny and competent and smart." Apparently the solution to a system of objectification in which women themselves are complicit, in which feminism has been co-opted by and for profit, is for us to be ourselves. It's a little hard to swallow. Unless there is a political dimension to our personhood that extends to other women, we will never be more than marketing niches. Levy has done the good work of documenting raunch culture. What next?