Why is Bush selling Miers as a lady, not a lawyer? 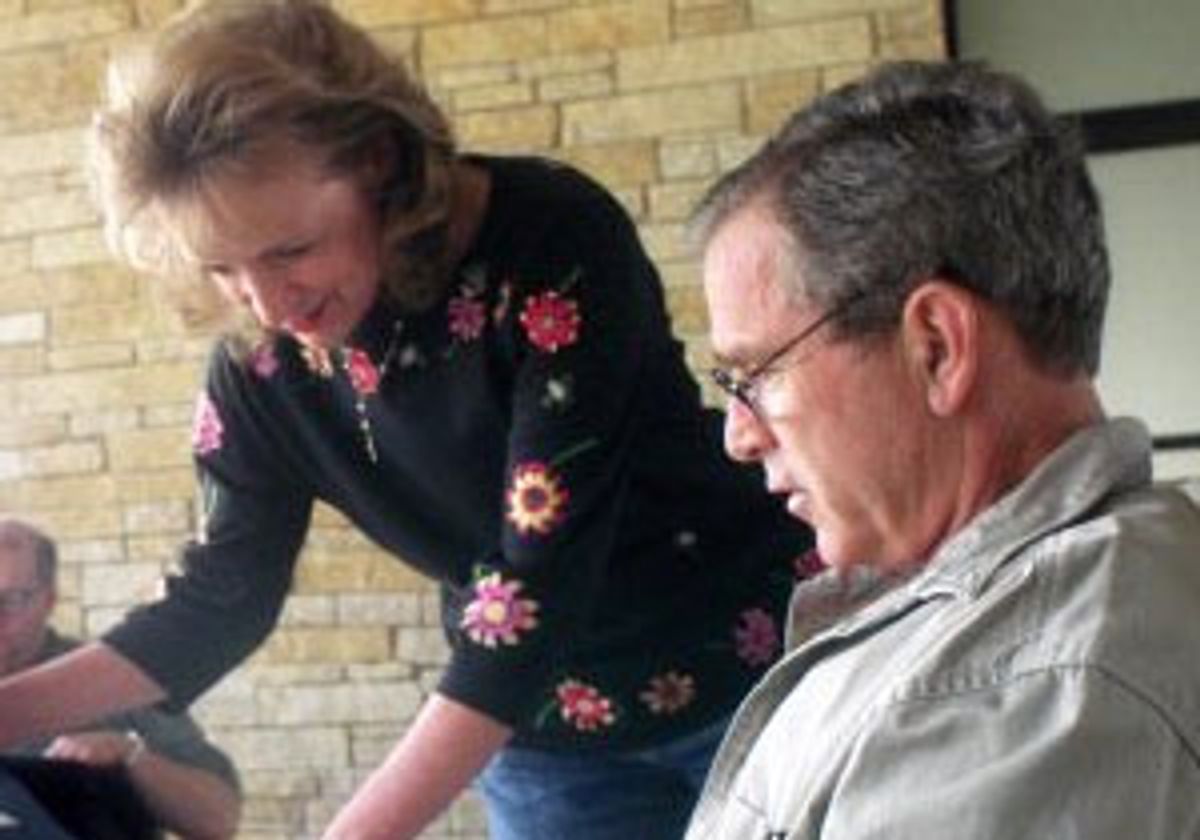 At moments I've found myself wanting to root for Supreme Court nominee Harriet Miers, the meek but determined, lonely-seeming Southern lady lawyer who found "something was missing" in her life in her late 30s, according to the New York Times, and filled the hole with fervent born-again Christianity. Maybe she won't be an ideologue. Maybe her years as a single person have given her a David Souter-like humanity and independence (that's of course the religious right's worst fear). Maybe she's the best we can expect from this administration, anyway.

But the noxious mix of sad, retro ideas about women that have been packed into her nomination, plus the always rampant cronyism that rewards loyalty over competence, is becoming more than alarming. God, this administration, and particularly this president, is messed up about women. We're frequently told how much he loves 'em -- loves 'em! Certainly he surrounds himself with them -- Karen Hughes, Secretary of State Condoleezza Rice and Miers are among his closest advisors. He went to war to liberate them in Afghanistan (though they'll likely have fewer rights in the new Iraq than they did before, but hey, you can't have everything -- women especially know that!). Now he's proudly sending another woman to the Supreme Court, to fill the shoes of retiring Justice Sandra Day O'Connor. But Miers is another example of Bush trying to use feminism politically while in fact sending very mixed messages: Good women come to power by doing what they're told, along with, in this case, taking good care of George W.

Maureen Dowd examined it first and best Wednesday morning, but I still can't stop wondering: How does this man get so many strong women to minister to him, personally and politically? First there's librarian Laura, next comes Karen Hughes, who gave up her family to move to Washington with Bush, then famously went home to Texas for about a minute, and is now traveling the globe selling the president's befuddled ideas about Islam to Muslims. And of course there's Condi, lovely and single and like a daughter to Bush (although she allegedly called him her "husband" once in public), vacationing with him and his family in Crawford, Texas, and at Camp David, always available. Finally, there's Miers, a bachelorette just like Condi, and true blue to her boss, maybe even a little bit love-struck. She told David Frum he's the most "brilliant" man she's ever met, and if that's not love, it's drugs, because "brilliant" isn't a word thrown around a lot about Bush. As Dowd wrote, "W. loves being surrounded by tough women who steadfastly devote their entire lives to doting on him, like the vestal virgins guarding the sacred fire, serving as custodians for his values and watchdogs for his reputation."

In a three-day spin cycle jampacked with creepy moments as the administration tries to stand by, and stand up for, its woman, the worst for me came Tuesday, when Bush touted Miers this way: "I know her well enough to be able to say that she's not going to change, that 20 years from now she'll be the same person with the same philosophy that she is today." Yuck. George, maybe you want to marry a gal like that, I'm not sure, but I know that's not what we're looking for on the Supreme Court.

Has Miers really Botoxed her values? Put her curiosity and independence in a blind trust (like the first President Bush, according to Garry Trudeau, so famously did with his manhood)? That seems to be what the president is promising. And he's promising the right something else: Despite her record of "firsts" -- first woman bar association president in Texas, first to lead her law firm -- she's an old-fashioned, nurturing woman who puts others first.

"Harriet is what you would call a Southern lady," cooed Merrie Spaeth, the Ronald Reagan staffer turned Swift Boat promoter last year. "It is marvelous to watch her in meetings with huge egos, where she allows people to think good results are the product of their own ideas." In the same Times piece Wednesday, Valley View Christian Church colleagues told a similar story. "She never took a role where she was trying to stand out front," said office manager Vickie Wilson. "She put herself in servant roles, making coffee every Sunday morning and putting doughnuts out."

So far the public portrait of Miers makes her seem a slightly sad figure. The lonely bachelorette was squired to her newfound faith in her mid-30s by Judge Nathan Hecht, who the Times also suggests was at some point a romantic partner, but now is just a close friend. On Tuesday for a while Drudge was blasting the coming New York Times story about her born-again journey as though it were an exposé, but in fact the tale was spoon-fed to a waiting media. This is something the administration wants to promote, not hide. Hecht even had a conference call with evangelicals to reassure them she's one of them.

It's disturbing that the administration is trumpeting Miers' faith as a talking point. But it's far worse that they're trying to sell her to women as an O'Connor replacement, while also trying to reassure the right by peddling her unthreatening '50s femininity. Where John Roberts was pitched, even to doubtful Democrats, on his intellect and legal competence, the administration is selling Miers on her loyalty and reliability. One of those tough fem-bots around Bush ought to slap him, and tell him to stop hiding behind Miers' skirts and come out and defend her legal accomplishments and her intellect. And if he can't, Democrats and Republicans should unite and reject the latest example of friendship trumping talent in this increasingly scandal-fouled administration.