"Wallace & Gromit: The Curse of the Were-Rabbit"

Clay animation's most famous cheese lover and his dog sidekick get the big-screen treatment -- and it's warm to the touch. 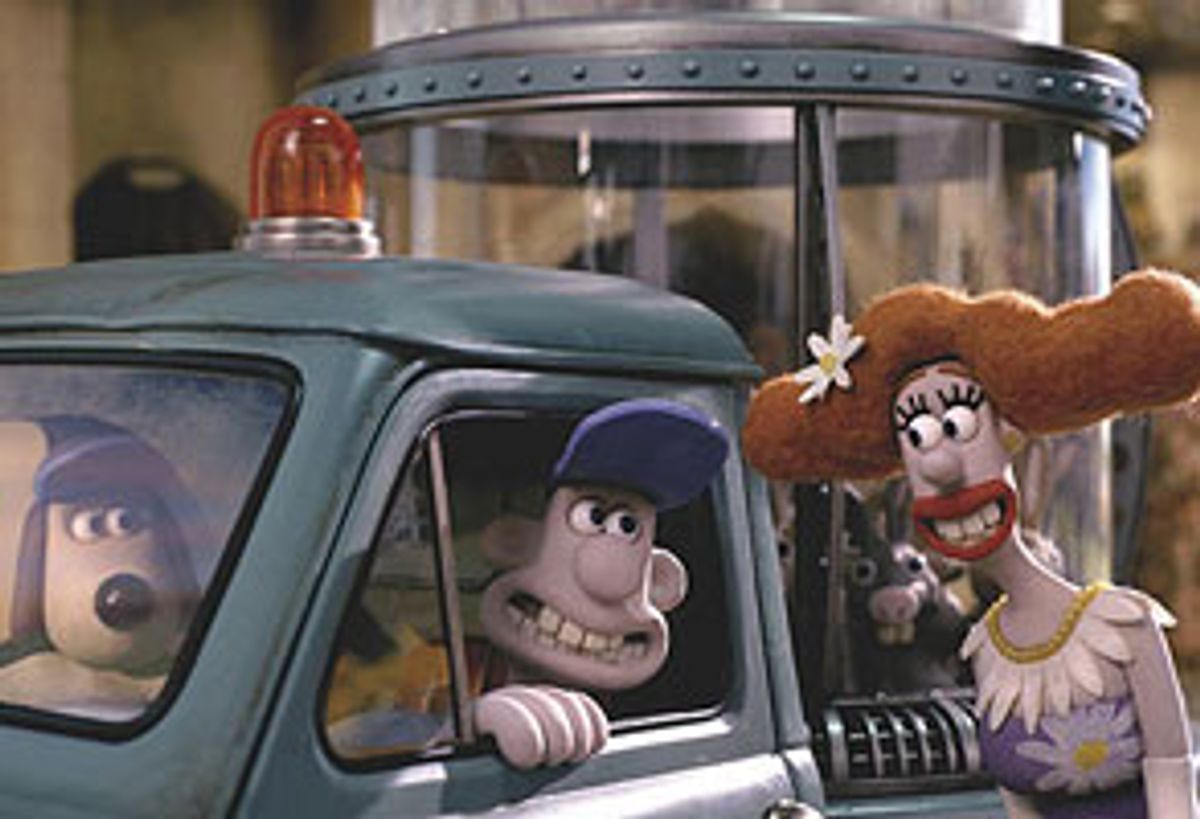 There may be greater moments of pleasure at the movies this year than watching, in "Wallace & Gromit: The Curse of the Were-Rabbit," a spiral of bunnies swirling around in the transparent canister of an ultra-humane bunny-rabbit-sucker-upper known as the Bun-Vac 6000. But I have yet to encounter them. "The Curse of the Were-Rabbit" is animator Nick Park's first full-length "Wallace & Gromit" feature, 85 minutes of bliss with a script that holds together better than those of most live-action pictures. And then there are the rabbits -- but we'll get to them later.

The "Wallace & Gromit" shorts, "A Grand Day Out" (1989), "The Wrong Trousers" (1993) and "A Close Shave" (1995), are close to perfect examples of short-form storytelling. Given how time consuming and labor intensive stop-motion clay animation is, most people who have grown to love these characters -- Wallace (voiced by Peter Sallis), a lover of cheese and a maker of great, if malfunctioning, inventions, and Gromit, his silent, eye-rolling canine sidekick, the real brains of the duo -- would have been happy enough with more shorts. But then Park, with fellow animator (and head of production company Aardman) Peter Lord, made the wonderful, ambitiously scaled "Great Escape" homage "Chicken Run." If chickens could have their own movie, why not Wallace and Gromit? "The Curse of the Were-Rabbit" may even be a better picture than "Chicken Run": Its cleverness is gentler, more subtle, though no less entertaining. It's also spectacularly lovely to look at, an action movie that's keenly attuned to the quiet beauty of manicured neighborhood gardens and moonlit nighttime village streets. "The Curse of the Were-Rabbit" is lively and boisterous, but it also has a quiet heart.

In "The Curse of the Were-Rabbit" -- which was directed by Park and Steve Box, from a script by Box, Park, Bob Baker and Mark Burton -- Wallace and Gromit run a humane pest-removal service (it's called "Anti-Pesto"), whisking destructive rabbits from people's gardens and housing them in the basement of their own cozy, cluttered cottage. (Gromit grudgingly serves up heaps of neatly cut carrot medallions for their breakfast; they repay his kindness with bunny high jinks, whacking him on the head with a wooden spoon.) One day Wallace and Gromit receive an anxious call from Lady Tottington (a delightful, twittery Helena Bonham Carter), owner of a posh estate. Could they please rid her property of its marauding troops of bunnies -- without hurting them in the least, of course? Wallace is instantly smitten with Lady Tottington, incurring the wrath of her would-be suitor, Victor Quartermaine (Ralph Fiennes, apparently having great fun playing a stuffy ninny), who, given the opportunity, would prefer to blast the rabbits to smithereens with a shotgun.

But the community faces a bigger problem than just regular-size bunnies: Seemingly from nowhere (although we know where he came from), a giant lepus appears in the neighborhood and begins feasting on the pneumatic-looking pumpkins, eggplants, spuds and melons that the townsfolk are hoping to enter in the upcoming Giant Vegetable competition. As the villagers lie sleeping, their prize lovelies begin disappearing in what one character refers to as "a night of vegetable carnage."

"The Curse of the Were-Rabbit" is filled with Nick Park-style touches and sight gags: A pot of something-or-other on the breakfast table is marked "Middle Age Spread"; the town vicar anoints his pampered aubergine with a sprinkle of holy water; a group of seemingly innocent rabbits beat their chests in the moonlight, echoing the Were-Rabbit's cry of "Awoooohoooo!" The action moves along seamlessly and believably, not least because we come to be so fond of the characters, especially Lady Tottington, a trilling, cooing gentlewoman who tottles along in patroness-of-the-arts boho garb and charms everyone in her path. "They do so loooove their veg!" she warbles in defense of the rabbit interlopers. "It's in their little bunny natures, and you can't change that, can you?"

You can't change it, but with rabbits like these, why would you want to? They don't have any lines -- rabbits can't talk, sillies! -- but, like Gromit, they tell us all we need to know with their ears and their eyes, expressing everything from willful naughtiness to not-entirely-unpleasant confusion (the chief expression of the fellows who get sucked up in that Bun-Vac).

There are lots of these little guys in "Curse of the Were-Rabbit" -- they're a design motif as well as being characters in their own right. And perhaps the loveliest thing about seeing them, and every other character here, on the big screen is the way their smooth Plasticine surfaces often show the visible fingerprints of the people who have touched them. So much modern animation is technically brilliant and yet comes off as cold and indifferent. But Wallace, Gromit, and the people and creatures in their world always look warm to the touch. Someone made, and moved, all those bunnies by hand. It's impossible not to believe in them.