Harriet Miers is all business

Bush's Supreme Court nominee does have a paper trail -- leading to major corporations. 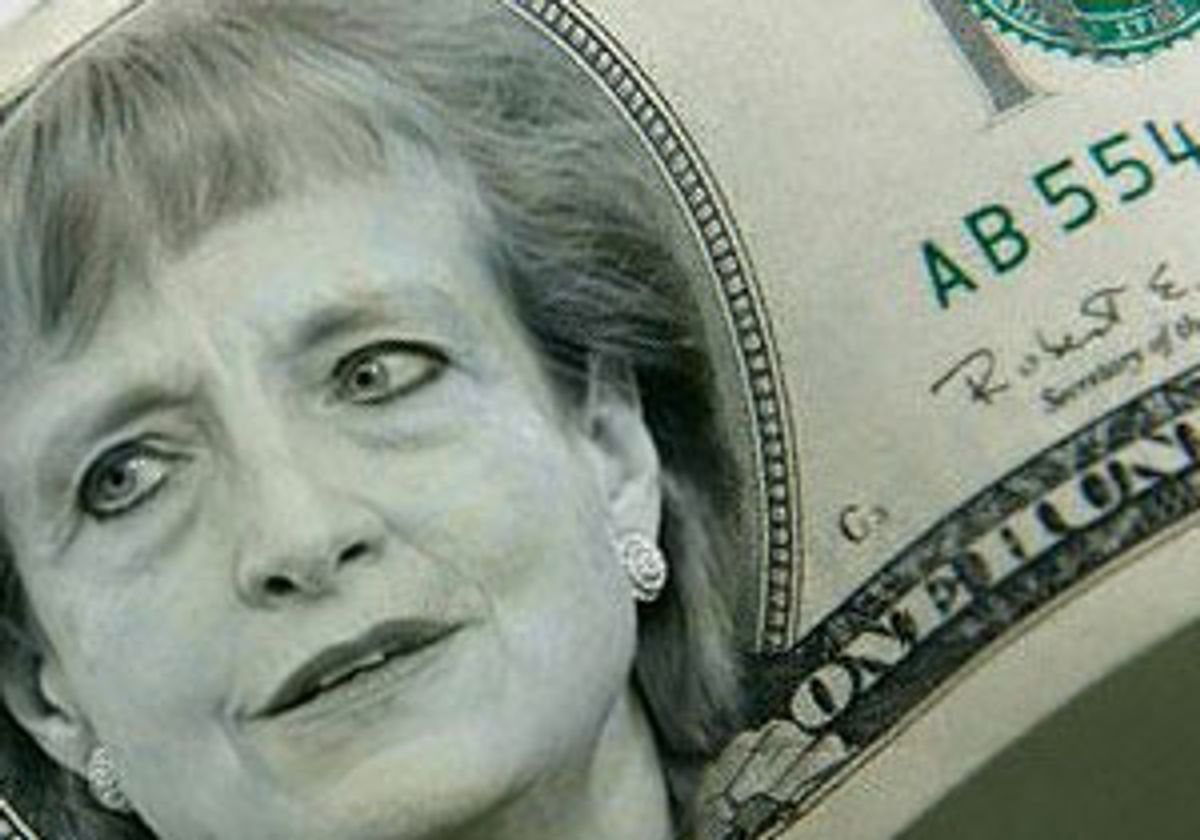 The outcry has run the gamut: From an angry religious right to wary liberals and Senate Democrats, President Bush managed to please almost no one with his nomination of Harriet Miers for the nation's top bench. But as pro-lifers and pro-choicers alike search for some scrap of ideological evidence in Miers' record to soothe their fears or fan their ire, one heavyweight constituency is quietly relishing the pick: corporate America.

One thing Miers has left clear in an otherwise thin paper trail is that she built her career on defending large corporations. She did her best to fend off class-action lawsuits by angry consumers claiming to be ripped off by Microsoft, the Texas Automobile Dealers Association, and former mortgage industry giant Lomas & Nettleton. She also has experience with the delights of contract conflicts and other tiffs between companies. Though President Bush singled out other accomplishments while announcing her nomination, Miers has been a board member of Dallas' Better Business Bureau and the Greater Dallas Chamber of Commerce. Her past campaign contributions to both Democrats and Republicans (the lion's share to Republicans) may befuddle ideologues -- but they undoubtedly make sense to big business, which often likes to play both sides of the aisle.

Since big companies care more about the bottom line than conservative social policy, corporate America is likely to come out in strong support of Miers as the nomination process continues. The U.S. Chamber of Commerce has already volunteered praise for Miers. "In terms of her experience with business issues -- yeah that's a plus for us," said Robin Conrad, senior vice president of the U.S. Chamber of Commerce's National Chamber Litigation Center. "It's really important that there are justices on the court that are familiar with the complexities of business issues and their practical implications."

The National Association of Manufacturers is defending her against detractors while it follows through on its own endorsement process. NAM's blog immediately stood up for Miers, bemoaning how quickly she became "Harriet-Miers-a-person-with-no-judicial-experience."

"Almost a third of the Justices appointed in the last seven decades came with no judicial experience," wrote NAM spokesperson Pat Cleary. "Her bio is filled with a lot of 'firsts' and accomplishments that aren't shared by most other lawyers," added Cleary, echoing one of Bush's key talking points on Miers. Still, perhaps catching on to social conservatives' strong misgivings about Miers, the blog backpedaled the next day, offering that "the post was not to advocate, but was to call for a respite and to say that groups ought not rush to judgment."

Whether the Senate judiciary committee will wrest substantive answers from Miers during hearings remains to be seen, but the clearest indication of her legal outlook, at least for now, lies with the cases she tried for her corporate clients. When car buyers sued the Texas Automobile Dealers Association and hundreds of dealers in 1997, claiming dealers were fixing prices, breaking antitrust laws and ripping them off by passing on a state tax to customers, Miers stuck up for the car dealers. Miers was brought in as lead counsel because of her reputation on class action and antitrust matters, according to attorney Robert Mowrey of Locke Liddell & Sapp, who took over the case from her when she left the firm. The federal portion of the suit has since lost its class-action certification, and currently many car dealers are in the process of settling, Mowrey says.

"She was instrumental," said Karen Phillips, chief counsel for the association, referring to the battle against class-action effort. "I was very impressed with her diligence and hard work." Brushing off criticism of Miers as "poppycock," Phillips said that as an experienced corporate attorney, Miers brings a needed perspective to the Supreme Court. "The fact that it is so costly, it's a tremendous strain on any organization to have to go through litigation and it's unfortunate because often times you get sued and it is spurious," said Phillips. "So I think she brings that understanding."

In 1993 computer users sued Microsoft for breaking consumer protection laws, charging that the computer giant had unfairly sold them new software (MS-DOS 6.2) to correct a problem with Microsoft's MS-DOS 6.0, instead of replacing it for free. Microsoft hired Miers to fight back; she served as lead counsel and head of strategy in the case. As she prepared to appeal the class-action certification of 11 million consumers to the Texas Supreme Court in 1996, the trial judge reversed herself and denied class-action status.

"This was a very big deal," says Jerry Clements, a colleague of Miers' when she worked at Locke Liddell & Sapp, and currently head of the litigation section at the firm. "This case was the beginning of an evolution in Texas jurisprudence that made it much more difficult to get class-action certification, and she was instrumental in it."

Miers has represented other deep-pocket clients under attack, including large banks and a life insurance company. Additional big-name heavy-hitters she defended include Dupont, Disney, Miramax and the then Anaheim Angels.

Business clients apparently were key to Miers' short-lived political career. When she ran for the Dallas City Council, where she served from 1989-91 as an at-large member, the Dallas Morning News reported, "Some political insiders describe Ms. Miers as the 'establishment' candidate, saying she has the support of the downtown business community."

Bush's Miers pick more than a decade later points to an intriguing tension within the Republican Party, between its ideology-driven right-wing base and its constituency of conservative business leaders, who are eager to develop stem-cell technology, and hire and promote talented employees, whether they be gay, lesbian or straight. Some observers say the Miers nomination follows a pattern Bush established back when he was governor of Texas, picking judges that reward corporate-friendly supporters and special interests.

There's no question that many of Bush's judicial appointments to district and lower courts in Texas often rewarded those backers, says Dallas Morning News senior political writer Wayne Slater, a longtime observer of Bush and the author of two books on the president's most trusted lieutenant, Karl Rove. "A number of the judges he named," Slater says, "were recommended by interests that wanted to limit lawsuits against business."

If there is a dichotomy in Bush's judicial selections, the struggle over it has already been on display in the defense of Miers this week. A spokesperson for the conservative Judicial Confirmation Network told the Boston Globe that colleagues on the Republicans' right wing were being reminded that Miers had helped Bush select scores of judges to fill appellate and lower court seats who did share their ideological concerns and outlook. "There's a lot of her fingerprints on those judges," the conservatives were told, in an effort to mollify their reluctance about Miers.

Both of Bush's Supreme Court picks had substantial careers as corporate defense lawyers; Chief Justice John Roberts, who not only represented various industries but lobbied for agribusiness and the cosmetics industry, could face serious problems regarding conflict of interest due to his own corporate history. In contrast, Bill Clinton's two Supreme Court nominees, Stephen Breyer and Ruth Bader Ginsburg, taught at universities and worked for the Senate Judiciary Committee and the American Civil Liberties Union, respectively, before becoming federal judges, and later top justices.

The same corporate profile for Bush nominees can be found at the next highest level of the federal judiciary. In the 5th Circuit, for example, which includes Bush's and Miers' home state of Texas, an examination of Bush's appeals court nominees by the Center for Investigative Reporting found that three of the four picks had substantial energy-industry connections that spanned over 50 years of their collective careers. Two of those, Edith Brown Clement and Priscilla Owen, were said to be on Bush's short list for the Supreme Court.

To be fair, Miers seemed to balance her heavy corporate client list at her law firm by advocating for and participating in pro bono legal work. "We can serve as the state's conscience, urging effective responses to the needs of the poor," Miers wrote in the Texas Bar Journal in 1992. "Particularly, we can do a better job as a profession and as individuals in ensuring legal assistance to those who need it and cannot afford it."

"Harriet I think brings a great deal to the table," says Jan Hart Black, president of the Greater Dallas Chamber and a longtime friend of Miers. "She not only had very high-powered corporate clients but she was committed to providing significant pro bono legal work in her community at the same time."

For one brief period of time just prior to her law school graduation in 1970, Miers worked for the famed San Francisco attorney Melvin Belli, known as the "King of Torts" for his lawsuits representing injury victims. Belli, often attacked as anti-business, once called himself "the poor man's ticket to the courtroom."

"It was good for her to be exposed to that," former Belli law partner Robert Lieff mused this week in the San Francisco Chronicle, following Miers' nomination. "It's a lot different than what she went off to do."

Dan Noyes is a reporter at the Center for Investigative Reporting. The Open Society Institute supports the Center's reporting on the federal judiciary.