The pretty sister is dumb; the smart sister is plain and resentful. How original. 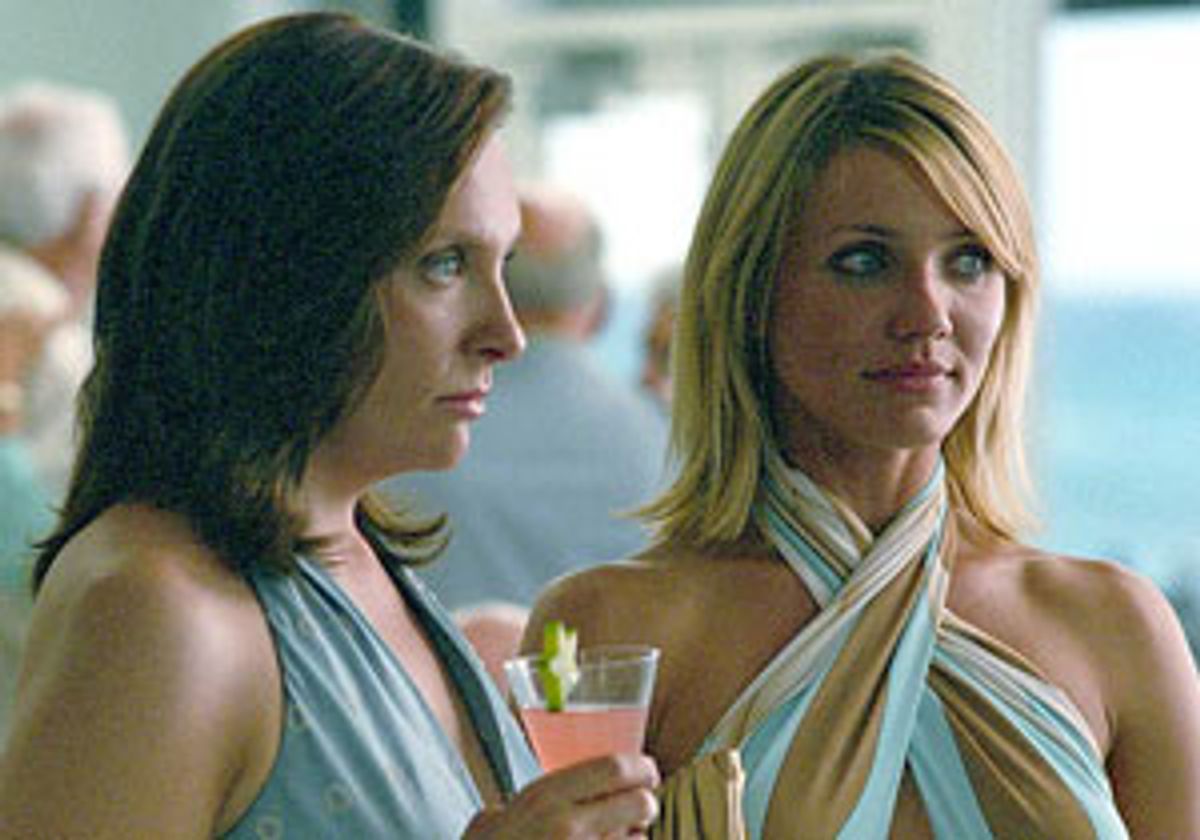 "In Her Shoes," based on the bestselling novel by Jennifer Weiner, is shamelessly positioned as a girl's-night-out movie: You don't need a brain to enjoy it -- a vagina is good enough.

Weiner's novel may be only a few years old, but this picture is totally 1992, dangling listlessly from the low-self-esteem laundry line like a pair of pantyhose that's been run through the washer 100 times too many. "I'm fat! My sister's prettier! I can't get a man!" Those are the oft-repeated complaints of Rose Feller (Toni Collette), the older sister of the allegedly much prettier, much skinnier, much sexier Maggie (Cameron Diaz). "In Her Shoes" springs from the line of thinking, proffered by Naomi Wolf and other pundits of the early '90s, that women are valued in society chiefly according to how attractive they are. But even as the movie pretends to refute those standards, it works hard to make sure its characters never slip their tyrannical yoke -- no yoke means no movie. Rose has to keep reminding us how inferior she is; otherwise, we might not believe it. It's enough to make you feel positively patriarchal.

But at least Rose is smart -- she's a lawyer with a good job and a closet full of expensive shoes (which, alas, she doesn't have the confidence to wear, possibly because Jimmy Choo is part of a global conspiracy to make her feel bad about her feet). Conversely, the movie doesn't come right out and call Maggie a dumb blonde. Instead the director, Curtis Hanson (apparently recovering, badly, from a botched brain-switcheroo with Nora Ephron), chooses to riff on the poignant fact that when Maggie tries out to be an MTV VJ, she can't read the teleprompter. (Somehow, though, she managed to read the newspaper ad that alerted her to the audition in the first place.)

The "dumb, pretty sister" vs. "smart, 'ugly' sister" setup of "In Her Shoes" is disguised as a heartwarming tale about two siblings who become estranged only to find each other again, but it's really just a dim-bulb exercise in the kind of "Love me! I'm miserable!" rhetoric that used to inform so much feminist discourse -- and, in some circles, still does. And if you try to tune out Rose's incessant self-victimization, you're left with no story at all: The picture's teeter-totter plot pretty much consists of Rose's battle with her own angst intercut with the life-changing experience Maggie undergoes when she treks to Florida to crash at the home of her spunky granny (played, with a blessed minimum of her usual patented twinkle, by Shirley MacLaine).

There, Maggie learns that old folks are people too, and that pretty is as pretty does. Meanwhile, Rose struggles with the fact that she's finally found a great guy who adores her for who she is (played, wonderfully, by Mark Feuerstein). The script here is by Susannah Grant who, considering the good work she did on the screenplays for "Erin Brockovich" and "Ever After," was quite possibly flummoxed by the source material: The movie works neither as a comedy nor as a lame melodrama -- its entertainment value is embarrassingly feeble.

And I'm still not sure what to make of the way the picture treats its two lead actors. The character of Rose is an unabashedly lousy fit for an intuitive, dazzling actress like Collette: She tries to bring some texture and depth to the role, but I couldn't help feeling she was simply bored by it -- it's the kind of big-name-director project that most actors don't want to turn down, so you can't fault her for taking it, and yet it's far beneath her. Diaz, although her timing is, as always, crazily perfect, may have it even worse. She's the character the movie beats up on for being attractive, shallow and irresponsible -- Take that, skinny, pretty, sexy person! -- to the point where its treatment of her begins to feel like a sadistic exercise.

I also wonder how you can make a movie with two such luminous actresses and manage to make them both look lousy. In several scenes Collette is forced to wear her hair scraped back in a severely unflattering do. Yet as hard as the movie tries to make Collette look plain, it can't diminish how stunningly distinctive her features are, or how beautiful her skin is. Diaz, on the other hand, an actress who's most definitely still holding the youth-and-beauty card, is shot by cinematographer Terry Stacey to look like a blowsy wreck, with splotchy cheeks and giant pores. No one's looking for gauzy artifice here. But the bells go off when I see a movie working so hard to punish one of its lead characters. Maggie is the story's token free spirit, but the movie sets up its terms very clearly: We're supposed to pity her and identify with Rose. Maggie, tall, slender and beautiful, is everything we wish we could be -- better cut her down quick. Sisterhood is powerful, but it's no match for envy and spite.