Today's 7-year-olds must do interviews, look through thousands of words, and answer 60 math questions in four minutes. This homework mania doesn't teach kids anything except that life is full of pain. 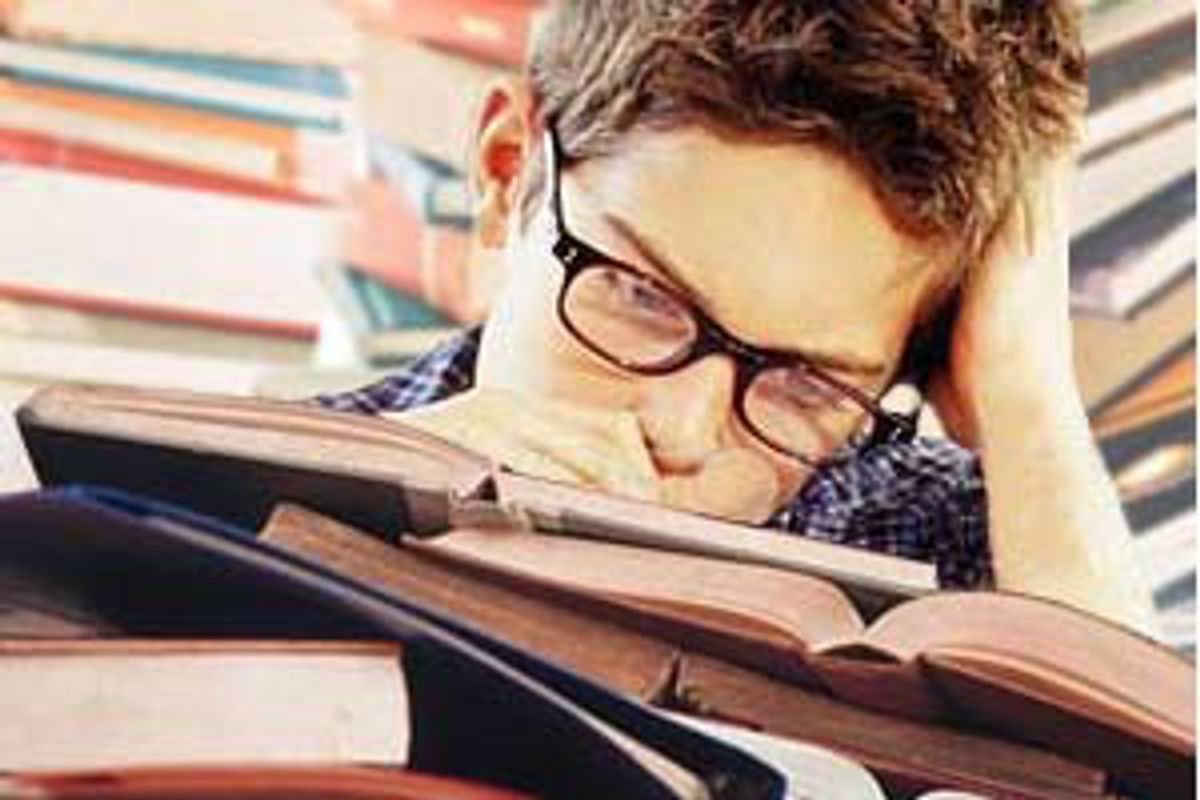 It was the night we wove an Iroquois cradle board out of natural fibrous materials that drove me over the edge. It was 9 p.m., an hour after bedtime, when Sophie suddenly remembered that in addition to a written report, her Native American history assignment required a visual presentation.

Frankly, so did I.

I hate homework. I hate it more now than I did when I was the one lugging textbooks and binders back and forth from school. The hour my children are seated at the kitchen table, their books spread out before them, the crumbs of their after-school snack littering the table, is without a doubt the worst hour of my day. If my son Zeke's teacher, a delightful and intelligent woman, were to walk through my kitchen door between 3:30 and 4:30 p.m. on a weekday, I could not guarantee her safety.

Eight-year-old Zeke routinely has an hour of homework a night. He's an interesting kid, one who's described as having a lot of "personality." He's the kind of kid who, left to his own devices, thinks it's funny to write "a Rottweiler" as the answer to every question on the homework page, even the math problems. Especially the math problems.

Accordingly, either my husband or I have to sit next to him and insist that he read the directions in his homework packet, instead of riffing on the crazy soundtrack that runs in his head.

School for Zeke is work, and by the end of a seven-hour workday, he's exhausted. But like a worker on a double shift, he has to keep going. When, halfway through kindergarten, we had to break it to him that this wasn't a one-year gig, that in fact he was looking at, conservatively, 17 more years of school, the expression on his face was one of deep, existential despair. That evening he calculated that the next time he could count on being really, truly happy was in 60 years, when he retires. His sister, however, is one of those cheerful Pollyanna types who finish their summer reading list before Memorial Day, and at 11 is already counting on getting at least one graduate degree. But even she hates homework.

When I sent out a feeler to mothers of other elementary-school students asking for their experiences with homework my in box was immediately flooded with replies, some furious, some rueful. "We had to set up an interview with someone in the community, transport the children, supervise the interview, take notes, take photos, print the photos, assist the students in making note cards for a speech, and help the kids make a poster about the community member," said Martha, the mother of twins in the Bay Area. Sounds like a nice project, doesn't it? It might have been -- for a 10-year-old. But Martha's boys are in second grade.

Six-year-old Katie Williams of Maryland spent days trolling newspapers looking for "io" and "ou" configurations in order to begin her "Rainbow Words" assignment. "Do you know how many thousands of words we had to read to come up with enough to satisfy that assignment?" asks her mother, Carlie. Once she found the words, Katie had to write each one over and over again, using every color of the rainbow. Get it? Rainbow words. What ever happened to using a No. 2 pencil?

Another mother described the weekly timed math tests mandated by her kids' teacher. "Sixty problems correctly answered in four minutes. We parents are supposed to stand over our kids with stopwatches. My children are very different from each other, but they have this in common -- they have both been in tears due to their fear of failing these inane tests. Mind you, these children are 7 years old."

But my favorite is Carlie Williams' nephew. Assigned to construct a relief map of one of the 50 states out of plaster of Paris, the boy chose Nebraska. He made a flat rectangle. As his aunt said, "You've got to love a kid who puts into the assignment exactly the effort it's worth."

How would we be spending our time if we didn't have to slave over these piles of mind-numbing make-work? Maybe some kids would be vegging out in front of the television or exercising their thumbs on their Gameboys, but I would guess that's not what would be going on in my house, or in most others. Instead, we'd do the things we rarely have time for during the week, like go for bike rides or shoot hoops. My kids might even occasionally enjoy the opportunity to be bored. You remember boredom, don't you? That state where the imagination is forced to take over and create entertainment?

Harris M. Cooper, the director of the Program in Education at Duke University and author of "The Battle Over Homework: Common Ground for Administrators, Teachers, and Parents," tells me that the homework load for most students has actually remained steady for the past 50 years, except for the group in which I did my very unscientific survey -- middle- to upper-middle-class students in the lowest grades. Cooper says that it's probably because educators of the children of the middle and upper classes feel a great deal of pressure to maintain test scores that they up the homework ante.

I also learned from professor Cooper -- aka the homework guru -- that there is no correlation between how much homework young children do and how well they comprehend material or perform on tests. Why? For a number of reasons. Because their attention spans are just too short -- they can't tune out external stimuli to focus on material. Second, younger children cannot tell the difference between the hard stuff and the easy stuff. They'll spend 15 minutes beating their heads against a difficult problem, and leave themselves no time to copy their spelling words. Finally, young children do not know how to self-test. They haven't the faintest idea when they're making mistakes, so in the end they don't actually learn the correct answers. It isn't until middle school and high school that the relationship between homework and school achievement becomes apparent.

So why the hell do Zeke and I have to spend every afternoon gnashing our teeth over the communicative and associative properties of numbers when we could be playing catch?

The reasons, Cooper says, extend beyond Zeke's achievement in this particular grade. Apparently, by slaving over homework with my son, I am expressing to him how important school is. (Of course, this rationale assumes that I'm not also expressing rage, or muttering curses about the authors of Zeke's math textbook.) When younger kids are given homework, Cooper says, it can also help them understand that all environments are learning ones, not just the classroom. For example, by helping calculate the cost of items on a trip to the grocery store, they can learn about math. The problem is, none of my children's assignments have this real-world, enjoyable feel to them. My children have never been assigned Cooper's favorite reading task -- the back of the Rice Krispies box. Instead, we're up all night weaving hemp.

The final, and perhaps most important, reason to assign homework to young children, says Cooper, is to help them develop study habits and time management skills that they'll need to succeed later on in their academic careers. If you wait until middle school to teach them these skills, they'll be behind. I suppose this makes sense. Spending their afternoons slaving over trigonometry and physics will come as no surprise to my kids. By the time they're in seventh grade they won't even remember what it's like to spend an idle afternoon.

According to Cooper all three of these rationales are based on the idea of keeping homework simple and short, and gradually building on its amount and complexity. The guideline educators typically use is the 10-minute rule. Children should be assigned 10 minutes of homework per grade per night, starting in first grade. So how about kindergarten? Well, Cooper's a circumspect kind of guy, so he wouldn't condemn it outright, but he did say this: "At this age, kids should not be expected to do much on their own."

And what about those long-term homework projects that involve a lot of "integration of skills" -- that favorite phrase I've heard again and again in all my children's classrooms? When used in younger grades the lesson those projects often teach is, "When the going gets tough, Mom gets going," says Cooper. "Complex projects should probably not happen in the lower grades, and when they do, there should be clear expectations about parental involvement." Amen to that, I say, because otherwise the only skills being integrated are those of procrastination and panic, and those are plenty finely honed around our house by now.

Take heart, parents, and bring the quotes from the homework guru to your children's teachers. I did. When I e-mailed Zeke's teacher to say he was too loaded down with busywork, she agreed and said he shouldn't do more than half an hour of homework every night. She instructed me to draw a line at the bottom of the page once we've both had enough, no matter where he is on the assignment.

Last night was the first of the new regimen. After soccer practice we set out the homework on the kitchen table. A page of spelling, two of math, a sheet of cursive. We got through the math OK, with me trying to hide the fact that I had to count on my fingers to check his work. He labored over the cursive, making rows of perfect "u's" and "w's," the tips of his fingers white on the pencil, his tongue sticking out the side of his mouth. Then it was on to spelling. We made it almost to the end of the page, to the paragraph full of errors to correct. He made his proofreading marks, and as he got ready to copy out the corrected paragraph I looked up at the clock. It had been 40 minutes.