"The Truth (With Jokes)"

Al Franken pukes into his wastebasket in Chapter 4 of his new book, then spends Chapter 5 in "Rove-induced septic shock." 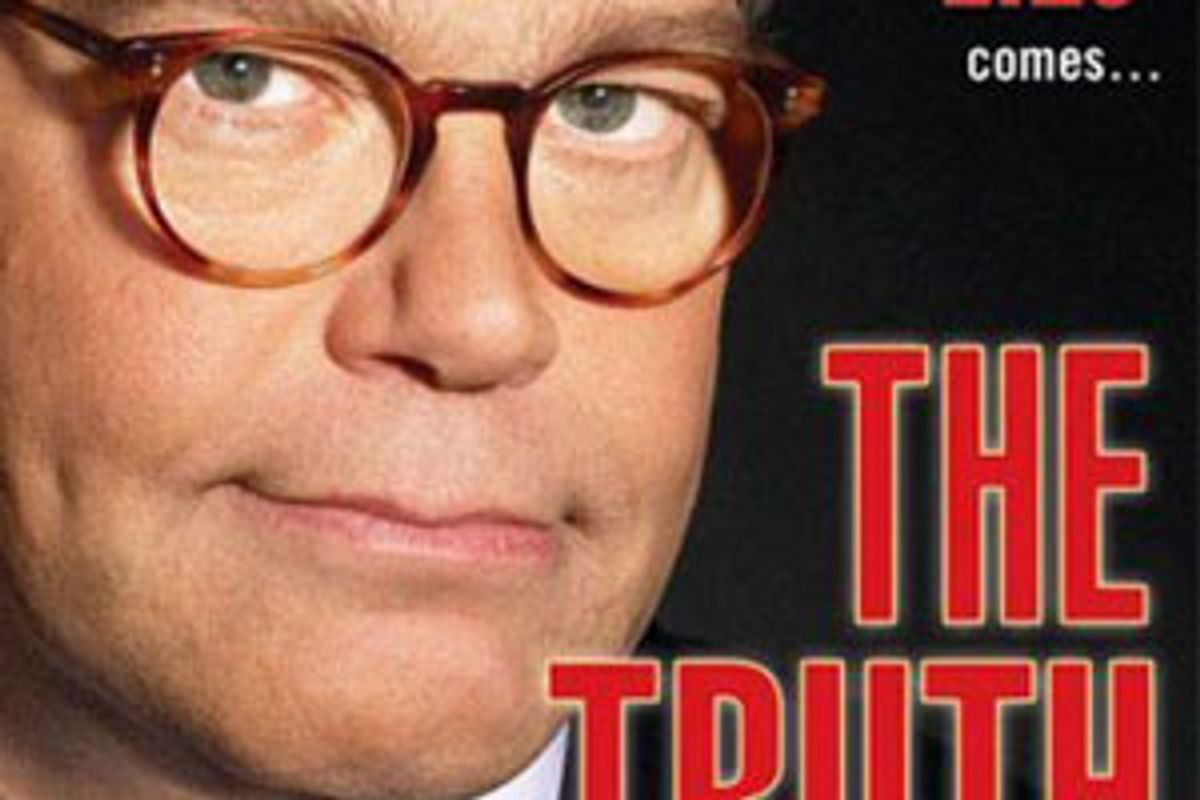 Al Franken's new book probably won't get the free ride to No. 1 bestseller status that his last one did. Since its title does not satirize any phrases trademarked by his rivals, you see, it will be difficult for Fox News to figure out how to sue. Franken's "The Truth (With Jokes)" will thus be left in the unenviable position of having to succeed on its own merits. And, I'm guessing, it will.

In his previous book, "Lies, and the Lying Liars Who Tell Them: A Fair and Balanced Look at the Right," Franken -- working with a team of young research nerds from Harvard -- systematically disproved pretty much anything Sean Hannity, Ann Coulter and company ever said on record. "The Truth," so to speak, may be even more damning. Here, Franken -- though without sparing the "hacky right-wing hackocracy" of the media -- goes almost exclusively after the nation's leadership. Of course, by this potentially delicious point in current events, some parts of the discussion feel a teeny bit dated, but that's not Franken's fault so much as Tom DeLay's.

Indeed, Franken's timing is pretty good, comically and otherwise. You might say, for one thing, that the book's publication coincides cannily with the soft launch of his 2008 campaign for the U.S. Senate. But it also enters a market already full of other Bush critiques, where it raises the usual question: Is this book (or any of its competitors) going to make a darn bit of difference?

Probably not, though you can count on seeing at least one suspicious Amazon review to the contrary. ("This book changed my life -- and my political affiliation!") Yet those of us reading it up here in the choir loft may still find the book rather satisfying. Though it's 90 percent things we already knew, it's suitably horrifying, slash, gratifying to see them all synthesized into a whole, especially since we haven't heard from Michael Moore in a while. It's a bit like reading the Nation or smart liberal blogs: You feel like you're not crazy after all.

And yeah, it's funny. Which is important. Obviously, humor makes this madness readable; don't even try to tell me you got through every word of the 9/11 Commission report. And smart humor is one of the only effective ways -- rhetorically speaking -- to bring these guys down, and not because "laughter is the best medicine." When things get this surreally bad, they defy direct description; and if the sky was falling five years ago, what do we say now? I imagine, for example, that Krugman, Kristof and Herbert have worn out their thesauri in search of synonyms for "incompetent" and "outrageous." This is perhaps why Franken, after vomiting in his wastebasket at the end of Chapter 4, spends Chapter 5 in "Rove-induced septic shock." I'm normally not a fan of puke humor, but here it serves as the Joke (recall, if you will, the book's title) that illustrates the Truth: When it comes to the "putrescence of Karl Rove's soul," you see, words fail.

Back to the beginning. In the first chapter, Franken establishes his contempt for the man -- nay, the machine -- with the chutzpah to call the narrowest victory ever by an incumbent a "mandate" (and the media -- even NPR! -- that immediately fell "into hackstep"). He also establishes his narrative persona, which is by turns winkingly self-important ("the lack of an Al Franken show broadcasting live from the Florida recount had cost the world's only remaining superpower its rightful leader") and sulkily adolescent ("George '2 = percent' W. 'Smallest Margin in History' Bush").

He then analyzes this victory, citing figures from the Economist showing that the percentage of the electorate who voted on the basis of "moral or ethical issues" was actually lower in 2004 than in the two previous elections. "Okay? All right? So it wasn't moral values, asshole. (Although coarse language may have played a role.) It was terror. Terror. TERROR!!!" writes Franken. He cites some "not so widely reported" remarks made by Dick Cheney while campaigning: "We have very credible evidence that tells us that if [John] Kerry wins, the following states will be hit: Ohio, Florida, Pennsylvania ..." This, like many others in the book, is one of those jokes you don't laugh at so much as nod at, thinking, "Oh man, that's so true." Indeed, here and elsewhere, Franken's not just being funny. He includes some pretty interesting stuff about a subfield of social psychology called "terror management theory." One TMT study showed that -- paraphrasing here, but not making it up -- test subjects, including liberals, were more likely to prefer Bush over Kerry if they'd been prompted first to think about death.

Of course, the nation might be thinking less about death in the first place had Bush been prompted to act on the August 2001 Presidential Daily Briefing titled "Bin Laden Determined to Strike Inside U.S." Franken assails not only Bush's failure to prevent "the most deadly terrorist attack in American history" but also his party's subsequent exploitation of the attack -- right in New York Freaking City, no less -- and warmongering conflation of Sept. 11 with Saddam Hussein: "Donald Rumsfeld had more meetings with Saddam Hussein than Osama bin Laden had." (Again, more of a nodder than a laugher.) Franken's thorough debunking of this fictional alliance doesn't offer much that we haven't already read in bits and pieces, but the synthesis is satisfying -- if infuriating -- and, thankfully, sprinkled with wisecracks that make it go down easier.

Franken elaborates on the other two elements of the Bush fear trifecta: "smears and queers," spending more time debunking the slandering "Swift Boat" punks than, frankly, they deserve, and positing -- quite seriously -- that some of the "gay" activists at not-so-gay-friendly polling places were actually Republican scrubs in disguise sent to rattle potential Kerry voters. (All part of the Republicans' "man-on-dog-and-pony show," featuring special guest Sen. Rick Santorum, designed to rally/terrify the base.)

If you manage to make it through the first half without hurling the book, aflame, onto the White House lawn, you are rewarded with some faint hints of hope (or at least schadenfreude) in the second, titled "Seeds of Collapse." Such "seeds" -- that is, the efforts and operatives that failed to rally the base -- include Social Security reform (remember that?), disgraced Republican power-broker Jack Abramoff, Terri Schiavo and, increasingly, the war in Iraq.

Franken's got plenty of humor techniques in his quiver, and most of them work. On the subtle end of the funny spectrum, Franken wields, to great effect, the withering understatement. "Let's face it," he writes. "The Schiavo case did not bring out the best in people." He finds in the e-mails of Abramoff -- who referred to the Native Americans he was bilking as "monkeys" and "mofos" -- a "certain lack of respect." The Heritage Foundation is "a right-wing think tank not known for its leadership in the civil rights arena." For guys who behave this badly, straight-ahead criticism doesn't cut it. The sarcasm is funny -- and it's also filling in, as above, where more direct words fail.

Other wisecracks, though goofy on their face, capture our sheer incredulity. Remember the Bush advisor who made that speech about how "we're an empire now, and when we act, we create our own reality"? Franken quotes him at length, and then asks, "Doesn't that sound like the kind of speech a Bond villain would make just before falling into his own shark tank?" Actually? Yes, it does. No joke.

Franken is also master of the sly aside. This is where he gets in his bonus digs at Tucker Carlson, Bill O'Reilly and the like -- and where he alludes to issues he doesn't have time to go into in full. (With the book clocking in at 336 pages, including endnotes, acknowledgments and a pilaf recipe, it's just as well.) When ripping apart the figures in Bush's Social Security plan, he writes: "In order to get that number, they had to assume that people would live to an average age of 150, but still retire at 67. That's an eighty-three year retirement. They're never gonna get to that without stem cell research."

To be sure, there are problems. The introduction (a fawning ode to Franken written by "Anonymous") is useless. There's a parody of Bush preparing for his "Mission Accomplished" spectacle that you might as well tear out before you read (pp. 245-246, so you know), because hello, these guys parody themselves. This is sophomoric overkill, and Franken knows better. One also wonders if his editor has a crush on him, or is an O'Reilly operative; someone more ruthless with the red pencil could have pared down the book to a leaner -- and even more convincing -- 250 pages, starting with the handful of weirdly juvenile gay jokes.

The book's flaws distract from Franken's message, but they don't necessarily undermine it. His sincerity and seriousness of purpose -- whether or not his humor, or indeed his politics, is your style -- do demand a certain level of respect. A downside: Franken gets a little too serious in a strident conclusion that exhorts the reader to action. "We have to throw these guys out," he writes. "Step one is 2006. The work starts now." Can't argue with that. But "The work starts now?" The task feels awfully bleak and intimidating (and dare I say humorless?), given the previous 288 pages -- "Seeds of Collapse" notwithstanding -- of sheer hopeless mess.

Fortunately, there's an epilogue: a genuinely charming coda that actually made me cry a little, sort of the same way I cried watching Geena Davis take the oath of office. The epilogue takes the form of a letter from Franken to his grandchildren (Barack, Hillary and Joe III), dated 2015. Even among the jokes (the overdue passage of the "You'd Think Stem Cell Research Would Be a No-Brainer Act") there's real, plausible hope herein. To avoid giving anything away, let's just say that by 2015, the villains have indeed tumbled into their own shark tank. And right now in 2005, of course, they're edging closer to it than perhaps Franken had imagined -- or dared dream -- while writing. But let's hope they hold off just a bit before they fall. After all, Franken's Senate campaign could use the publicity.