This Halloween, what scares you the most? Sea monsters, drug-resistant diseases or rolled-up lunch meat? 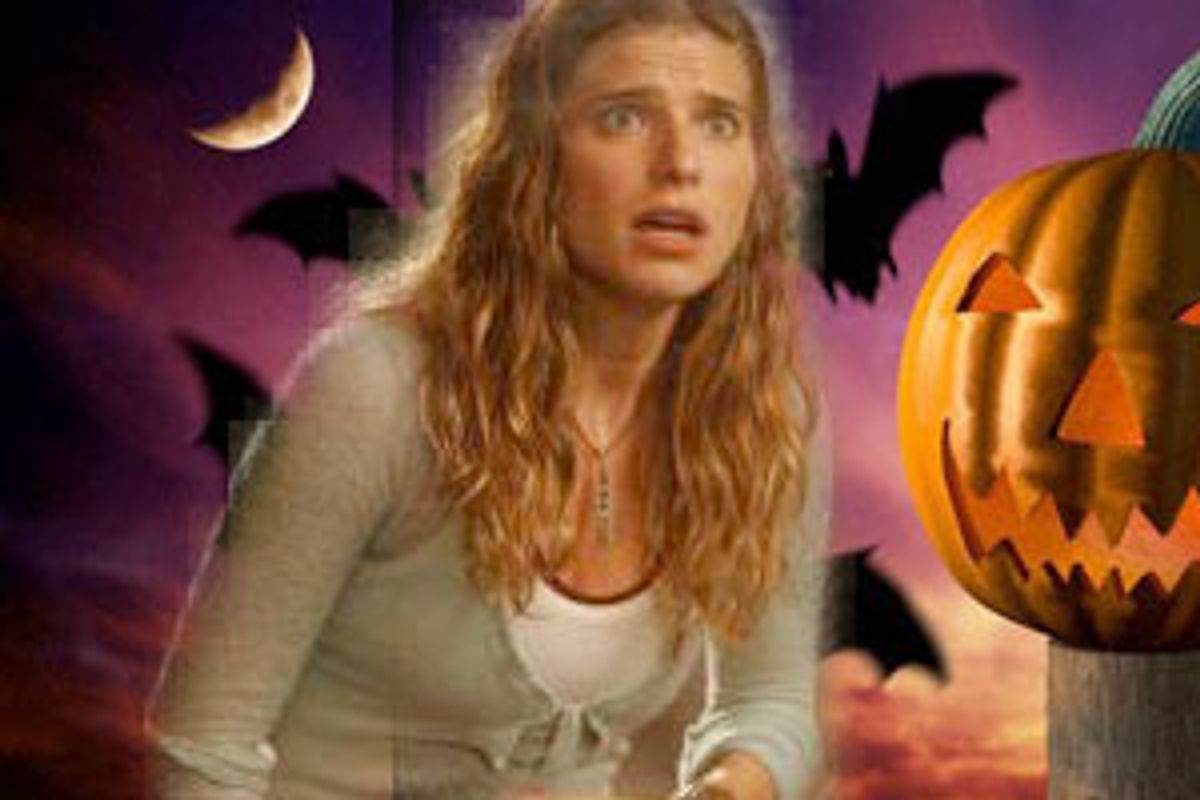 Three cheers for fears!
In honor of Halloween, it's important to explore our darkest fears and nightmares. Why? Because fear makes us feel more alive -- and more neurotic, paranoid and anxious. When we feel neurotic, paranoid and anxious, we work harder, and we attempt to soothe ourselves by eating too much and shopping for stuff we don't need. In this way, fear increases productivity, raises the gross domestic product, and pumps more cash into the economy. This fuels the economy, which enables us to flourish, mostly by running roughshod over billions of already-downtrodden third-world peoples. So, do your part for the economy this Halloween and get in touch with your fear.

Not sure of what to fear? Here are a few suggestions:

1. Fear itself
2. The avian flu
3. The housing bubble
4. Ryan Seacrest
5. The prospect of 20 more years in Iraq
6. The replacement of Alan Greenspan as chairman of the Federal Reserve Board
7. The fact that "Arrested Development" could get canceled if you don't tell everyone you know to start watching it
8. The possibility that your daughter could grow up to marry a guy like Kevin Federline

Still not shaking in your boots? How about a little ghost story, then? Once upon a time, there was a little boy who lived all alone in a great big apartment. One day he was bored, so he turned on one of those "Law & Order" marathons they run sometimes on TNT. Forty years later, he regained consciousness. Disoriented, soiled and very hungry, he realized that he had wasted his entire life watching Sam Waterston condescend to low-life scum. Then he died. The End.

Snug as a superbug in a rug
If not even Sam Waterston can strike fear in your heart, PBS's new special "Rx for Survival: A Global Health Challenge" surely will. In fact, watch a full hour of it and you'll feel jittery enough to spend the rest of the day at the megamall self-medicating with whimsical, overpriced tchotchkes -- preferably with a surgical mask firmly in place to keep you safe from all those drug-resistant bacteria floating around.

I don't know about you, but nothing stirs up fear in me quite like a kaleidoscope of deadly diseases. Luckily, though, PBS's special sidesteps typical TV-news fear-mongering (Did you know that the locks on the changing rooms at the Gap are teeming with more bacterial life than a dog's rectum?), focusing instead on laying out the challenges faced by the World Health Organization in its quest to limit the global spread of killer diseases.

You know how confused a lot of people get figuring out the difference between viruses and bacterial illnesses? Well, "Rx for Survival" not only offers some very simple illustrations of how different diseases enter the body and spread, but the show also places its subject in a historical context that's both informative and fast-paced enough that it doesn't lull you to sleep. While a lot of these sorts of shows vacillate between absurdly simplistic yet nonillustrative examples ("Suppose this orange is a virus!") and medical non sequiturs ("Influenza A viruses have 16 H subtypes and 9 N subtypes"), "Rx for Survival" walks a careful line between remaining understandable and offering a dramatic look at the big picture.

Of course, this big picture is more than a little daunting. When you see what we're up against, from HIV to the reemergence of polio to a host of new superbugs, it can really give you a feeling of admiration for those involved in fighting these uphill battles. Polio, for instance, is popping up in Africa in part because a renewed suspicion of Western medicine is keeping the public there from getting vaccinations. "Allah keeps my child safe," one man tells the activists who visit his village. "Who are you to keep him safe?"

But every second of this three-part series isn't dire and depressing. I particularly loved the segment on the activists of the late '60s, pictured riding around on motorcycles "Easy Rider" style, who tracked down smallpox cases in remote villages. About these "smallpox warriors," Doug Henderson, former director of the Smallpox Campaign, tells us that a number "had rather long hair. They certainly weren't individuals who were likely to show up and be well-received at an embassy cocktail party, but they worked tirelessly. They were real heroes."

As hesitant as I am to proclaim a six-hour series "mandatory viewing," given the real possibility of a global health crisis in our lifetimes, "Rx for Survival" (premieres Nov. 1-3 on PBS, check local listings) offers a lively, in-depth exploration of pressing health issues we should all be aware of.

That said, nothing that comes out of the Barbato 'n' Bailey Circus is without its charms -- these two have an eye for those little details that have the power to intrigue, confuse or depress us, depending on the subject at hand. At one porn set, the camera lingers for a long time on a melancholy-looking craft services table featuring a plastic-covered platter of rolled-up lunch meats and a big bag of potato chips. Later, we see one of the suitcase pimps, a very ordinary, friendly-looking guy, helping himself to the limp assortment of lunch meats while his girlfriend's moaning and squealing can be heard from the next room. It's really funny and really, really sad at the same time. In fact, it makes me feel a little sick just thinking about it.

But see, that's what separates a good reality/documentary producer from a bad one: The good producer knows just how exquisitely sad lunch meat is. Hell, a good producer can build a whole segment around rolled-up lunch meat.

Sigmund strikes again
Speaking of rolled-up lunch meat, I think it's pretty clear by now that "Surface" is to "Lost" what rolled-up lunch meat is to paper-thin slices of rare, seasoned roast beef. No matter how much Spielberg-infused flair the writers and editors of "Surface" put into making their sea monster show entertaining, they just can't compete with the other respectable "Lost"-alikes out there this season.

I blame the sea monster. I mean, really, what genius thought that a sea monster could hold together an entire series? Isn't that what we have made-for-TV movies like "Vampire Bats" for? "Lost" (9 p.m. Wednesdays on ABC) made the mistake of building its premise around monstrous polar bears and magical forces at first, too, and you see how far it rode on that dead horse. (What happened to the polar bears, by the way?) Refocusing on the hatch and the other survivors has really turned the show around entirely.

Sadly, all "Surface" (8 p.m. Mondays on NBC) can focus on is evil government agents trying to keep the news of the sea monster from the teaming masses of sea-monster-loving morons out there, morons like the kid who's risking life and limb to save his wee sea lizard from an uncertain fate. The lizard killed a poodle and seemed to give a cop cardiac arrest, but who cares? It's so adorable!

All of which drives "Surface" firmly into well-worn Spielbergian territory, replete with its spooky-cute scenes of the sea lizard bumbling down to the kitchen to feast on a big carton of salt. Mom wakes up to find the kitchen a mess! "What the -?!!" It's like "Close Encounters" meets "E.T." without the poignant dialogue and the Teri Garr.

And then there are those government agents, with their cellphones locked and loaded, snooping around for classified documents and jars of primordial ooze. Are we really going to spend the rest of the season running from the law with a jellyfish splashing around in a jar on our moron-heroine's lap?

Dr. Swoon to the O.R.
Screw sea monsters -- I want plucky young doctors in love! Which is alarming to me, since I thought I was pretty much done with hospital shows until "Grey's Anatomy" (10 p.m. Sundays on ABC) came along. You could call it the "Ally McBeal" of hospital shows, except it's much smarter and far less irritating than anything penned by David E. Kelley.

Besides, what's scarier than falling in love with a droolingly dreamy doctor (Patrick Dempsey), only to find out he's not only married (er, separated) but has cold feet about finalizing his divorce? And the wife! Ooh, the wife. The wife is the perfect scary, self-righteous, bossy spouse that most women relate to, fear becoming and, most of all, fear tangling with.

I love the fact that these doctors aren't all hellbent on saving the world, too. Sure, they care, but they're also just really, really anxious to get their hands on some serious cases and start cutting and clamping and so on. They act like real doctors -- sometimes compassionate, sometimes competitive, sometimes totally apathetic -- and that makes them interesting and human. Despite what you see on "E.R.," it would be impossible to care as much as those people care about every single person who comes in screaming with half his brain falling out. Sometimes, medicine is just sport. Sometimes, doctors laugh when they chat about a patient flatlining. It doesn't mean they're evil (at least not most of the time), it just means that they'd prefer not to lose their minds or suffer severe post-traumatic stress syndrome before they're 40.

I know I've said this before, but the casting director of "Grey's Anatomy" deserves a gift basket the size of a Mini Cooper for pulling this show together. Sandra Oh, Ellen Pompeo, Patrick Dempsey? Even the jerk and the hot girl and the dork are endearing. Honestly, I can't believe I'm watching a show about doctors regularly, but every time I tune in for "Grey's Anatomy," I'm really glad I did.

In conclusion
Fear fuels the economy, and keeps the leader of this fine nation in office. Fear makes mice out of men, and then sends those mice to an elaborate lab experiment overseas. Fear makes you floss regularly, or at least makes you worry about the fact that you don't floss regularly. Fear sustains the multibillion-dollar insurance industry. Fear floats NASDAQ and the Dow. Without fear, "America's Most Wanted" wouldn't be a hit show, and Osama bin Laden would be just another rich kid with a crappy attitude and too much time on his hands. He'd be just like Paris Hilton, except with a bazooka where the handbag dog would normally go.

This Halloween, whether you're searching in vain for a crappy costume to wear to the party you don't want to go to or looking for razor blades in your kids' Milky Way miniatures, please take a minute to relish the many effects of fear. Your racing heart rate and elevated stress levels will thank you for it!

Next week: Aaron McGruder's "Boondocks" brings the fear of a black planet to the smug, backslapping honkies at "Adult Swim."