At the 25th anniversary of John Lennon's death, a handful of writers attempt to tell us something we don't already know about the Fab Four. 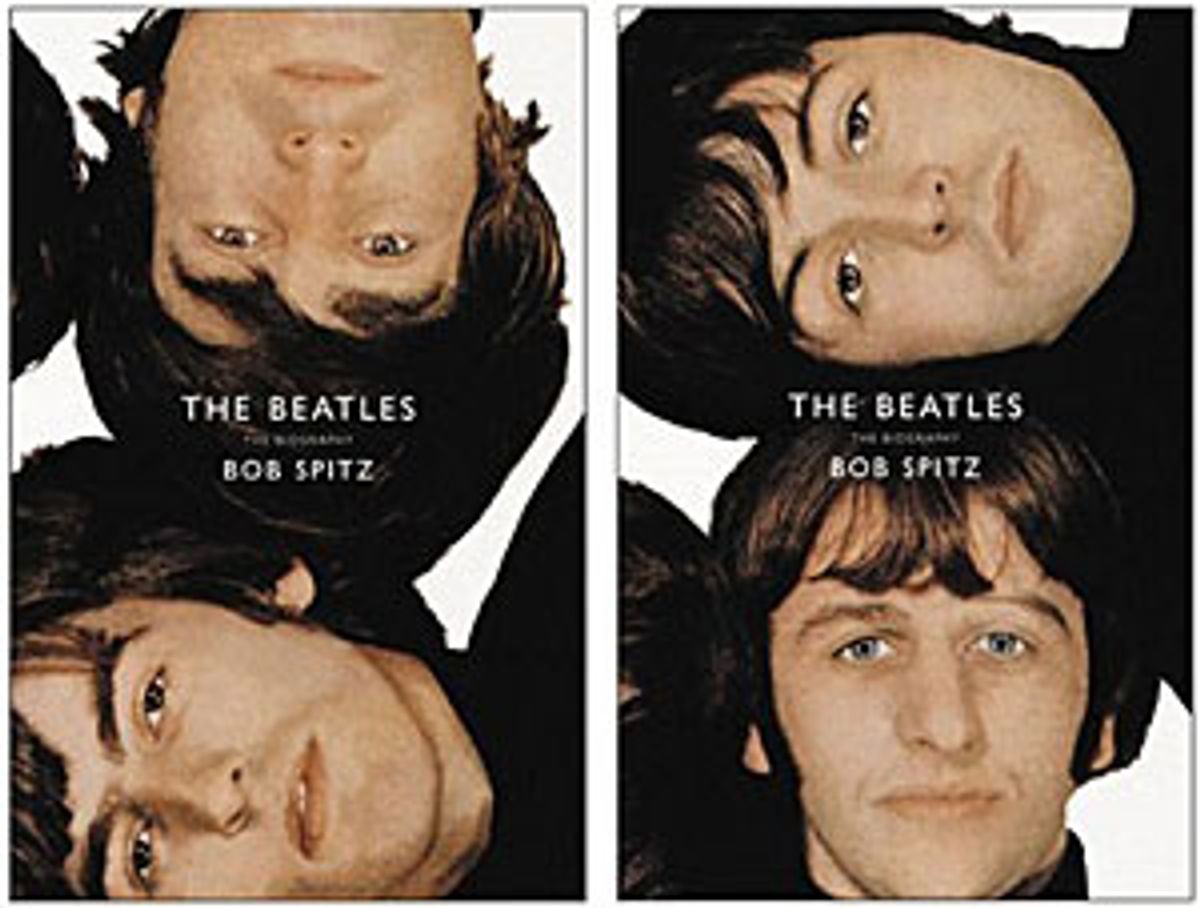 A 14-year-old boy sits in a suburban basement, smoking his first joint, when someone puts on the Beatles album that will, of course, alter his life forever. Maybe it's "Help!" maybe "Revolver," maybe it's "Abbey Road." It doesn't matter. Something about the sound: sweet without being saccharine, accessible but elusive -- it seems created for him, and him only. "Man," he mutters to himself, "who are these guys?"

In most cases our impressionable hero grows up, loses his acne, discovers the Rolling Stones, has sex, entertains more active passions than pop music obsession, and though he'll always dig the Beatles -- who doesn't? -- the band will never again be the deity it was in his youth. But there are the exceptions: the eternal 14-year-olds who grow up to write biographies of rock bands, devoting their adult lives to addressing those juvenile basement quandaries with scholarly gloss. Who are these guys? And, dude, how'd they do that?

Enter music writer Bob Spitz: onetime manager of Elton John and Bruce Springsteen, author of books on Bob Dylan and Woodstock, professional boomer sentimentalist. In his new "The Beatles: The Biography," Spitz devotes 856 pages of retina-impairing text to asking the question of how the Beatles did what they did. The more pressing question, however, may be whether this book is really necessary. As Spitz acknowledges, there have already been hundreds of books written about the band, ranging from fawning fandom drivel to self-serving pseudo-exposés to perfectly decent histories like Hunter Davies' authorized "The Beatles," published in 1967, which Spitz uses as a primary source. And there will, of course, be hundreds more penned over the years: new theories floated about John and Yoko, about the firing of original drummer Pete Best, about the "true" origin of those hairstyles, about what it's really like to be the pool cleaner of Paul McCartney's great-grandchildren.

In fact, alongside Spitz's book, recent weeks have brought the publication of "John," by Cynthia Lennon (John by John's first wife); "Lennon Revealed," by Larry Kane (John by dubious journalist); and "With the Beatles," by Lewis Lapham (John and band by the eruditely pugnacious Harper's editor, who reports on their infamous 1968 meditation vacation in India). Reading these books back-to-back provides a case study in the shortcomings -- if not the all-out impossibility -- of attempting to illuminate on paper what makes pop in general, and the Beatles in particular, so perennially seductive.

Spitz, of course, would shudder at the idea of being grouped as another featherweight alongside the gossips, the hacks, the cultural critics, the money-motivated ex-lovers. He aims to be not merely another barnacle suctioned to the belly of the beast, but the barnacle, who, in the process, has created a beast of his own. The press materials accompanying the book include an interview in which Spitz boasts of handing in a first draft at 2,700 pages, as if warning Robert A. Caro to watch his back next time he's strolling through Barnes & Noble. In Spitz's mind he has spent the past eight years writing what he sincerely believes to be "the" Beatles book, a biography-as-black-hole that consumes all that attempts to come near it.

Mission accomplished? If "definitive" means producing a work as clumsy as it is ambitious, as flat is it is evocative, as stultifying as it is entertaining, then without question Spitz has succeeded.

Spitz has said that for a model he looked to David McCullough, who takes a historical novelist's approach to writing historical nonfiction. McCullough is a master at fusing heroic bouts of research with a knack for storytelling, creating rollicking, Dickensian biographies that teem with eccentric personalities and lush descriptions of a pre-televised world. Inspired by this technique, Spitz sets out to deliver the Beatles as historical epic rather than pop cultural phenomenon. He prefaces John Lennon's birth, for instance, with an eye-glazing microhistory of Liverpool's shipping industry, as if the immaculate conception of the Beatle were somehow part of the city's industrial evolution. The result is often as cumbersome and hyperbolic as it is informative. But the real issue with applying the McCullough method to the Beatles is far simpler: 1966 isn't 1776, and John Lennon isn't John Adams.

This isn't to diminish the accomplishments of the Beatles just because they didn't, between songwriting and touring, create the framework for an entire nation. But unlike the Founding Fathers, the Beatles have been documented ad nauseam in movies, documentaries, interviews, concert footage, recorded recording sessions -- forces that conspire to render the biographer's florid incantations of the past superfluous. It says something that while Kane's "Lennon Revealed" is an unreadable, bottom-feeding study in journalistic desperation, the DVD it comes packaged with -- an uncut interview Kane conducted with John and Paul from 1968 -- is a fascinating glimpse into the tense chemistry between the two frontmen shortly before they went their separate ways. Maybe the image we have of the Beatles is mythologized spin -- they are, after all, a rock band -- but nonetheless it's anything but blurry. To be able to cut through the mediated glare and introduce the boys as something fresh requires a level of skill that appears to be just out of Spitz's reach.

Spitz is a perfectly capable writer; the trouble is that he has habit of posing as a great one. And so what could be said in one page is said in 20, often in clichi-speckled language that's meant to enhance the narrative but instead buries it under the sort of prose that turns writing teachers into alcoholics. His concert scenes are soporific showcases in which the audience "didn't know what hit them" and, afterward, "nothing was ever the same." The '50s and '60s are presented with the Technicolor earnestness of a PBS documentary. A contributor to the New York Times Magazine, Spitz approaches the book as if it were one biblically long magazine article, treating the reader to countless anonymous quotes from "former acquaintances" and "classmates" that ultimately tell you nothing except the fact that Bob Spitz tracked down a great many people with dim Beatles recollections and zero interest in seeing their names in print. It's one thing to be a fastidious researcher, but you can't expect a reader to trudge through nearly a thousand pages if you don't use that research to deftly re-create moments with a sense of immediacy. There's no question that Spitz has produced an indispensable reference for Beatles obsessives -- the book touches on everything from John's losing his virginity to his dabbling with heroin, from their early days in Hamburg, Germany, to their final sessions at Abbey Road -- though even the most loyal fan may find himself longing, at various intervals, for the PowerPoint version.

Which is a shame. Every now and then you get glimpses of a streamlined, better structured, more precisely written book hiding somewhere between the covers and waiting to be coaxed into life. Take Spitz's portrait of the Beatles' first arrival in America and their press conference at Kennedy airport: It's expert -- you feel as if you're there alongside a young Nora Ephron (writing for the New York Post) and Tom Wolfe, being charmed by the mop-topped rascals. Spitz is terrific when it comes to deconstructing how various deals by people purporting to have the band's best interests in mind were designed to exploit the Beatles. Most compellingly, he breaks down how the press reacted to the band: earnestly embracing their fables without ever prying too deeply into their personal lives. (John Lennon managed to hide the fact that he was married for years because -- get this -- journalists respected his wishes to keep his marriage private.)

The subtext of much of Spitz's book is that we won't ever have another Beatles for the same reason we won't ever have a president as iconic as John F. Kennedy: The press won't allow it. Today the media is far more interested in killing our idols -- or at least pointing out that they too go grocery shopping and get cold sores! -- than supporting them. In the '60s, World War II and the Korean War were still smoldering memories. Optimism could sell newspapers the way only cynicism can today.

Feeling nostalgic? Don't. Cynicism may rob us of us certain pop ephemera, but it produces more compelling journalism, and fortunately not every writer who covered the Beatles was smitten with the band. When Lewis Lapham was sent to India to write about the Beatles for the Saturday Evening Post, he was a young, uniquely skeptical reporter who didn't get what the fuss was all about. "I didn't rate myself an informed or fervent fan," he writes in "With the Beatles," a sliver of a book chronicling his stay at the meditation compound where the Beatles spent four months, along with Mia Farrow, Donovan and the Beach Boys, "studying" with the Maharishi Mahesh Yogi, founder of the Transcendental Meditation movement. The Maharishi was viewed even then as a huckster, a commodifier of spirituality for celebrities, the messiah with a publicist who paved the way for the Kabbalists currently schmoozing with Madonna. Or, in Lapham's words: The appeal of the Maharishi was "characteristic of bored rich people suffering from a surfeit of milk and honey."

At just over 100 pages, Lapham's travelogue is charming but slight, and best read as a delicious footnote (and much-needed antidote) to Spitz's book. Lapham presents the Beatles in India as social comedy: the beginning of Western pop culture's suspicious fascination with the East. Unlike Spitz, Lapham's touch is light and detached, his eyebrow perpetually raised, his command of language far more scrupulous. He sees the Beatles as a curiosity, not a revelation. And yet, ironically, it's Lapham who manages to etch the more evocative portrait of the band members: the way they interacted both as individuals and as a collective, the way it may have felt to spend some time around them.

Perhaps the greatest shortcoming of Spitz's gargantuan effort is that the actual boys of the Beatles never quite emerge as anything more layered than the stock characters we know and love. John is the volatile peacenik. Paul is cute but slyly cunning. George is quiet. Ringo is goofy but -- sit down for this -- not as goofy as you'd think. Even Cynthia Lennon's "John," composed with the stilted prose that smacks of a ghostwriter, is more effective at conveying how the Beatles affected the people closest to them. Her still-tortured self is like a negative image of John's personality. Meanwhile, in Spitz's book you are told a great deal, but shown very little. Most frustratingly, you never get any sense of exactly how the famed Lennon-McCartney songwriting process worked, except that it came to them so easily that, on one occasion, they ducked off into a corner for a few minutes and hashed out a song ("I Wanna Be Your Man") for the Rolling Stones.

But maybe it's unfair to expect Spitz, or anyone, to be able to elucidate something as elusive as how pop music happens. As an art form, pop is a paradox: elementary but complex, obvious but evasive, an outsider creation embraced by the populace. It makes perfect sense, and yet it makes no sense. It is the precise opposite of an 856-page book. The Beatles were unique in that they managed to inspire such innocent fervor while being genuinely innovative, the equivalent of the Backstreet Boys morphing into Radiohead. Who are these guys? How'd they do that? In trying to get to the root of these questions, Spitz incidentally exposes what makes them so compelling -- that if they could actually be answered, they wouldn't be worth asking in the first place.