"Get Rich or Die Tryin'"

50 Cent takes to the big screen in Jim Sheridan's ghetto melodrama. And? He cries. Don't laugh! 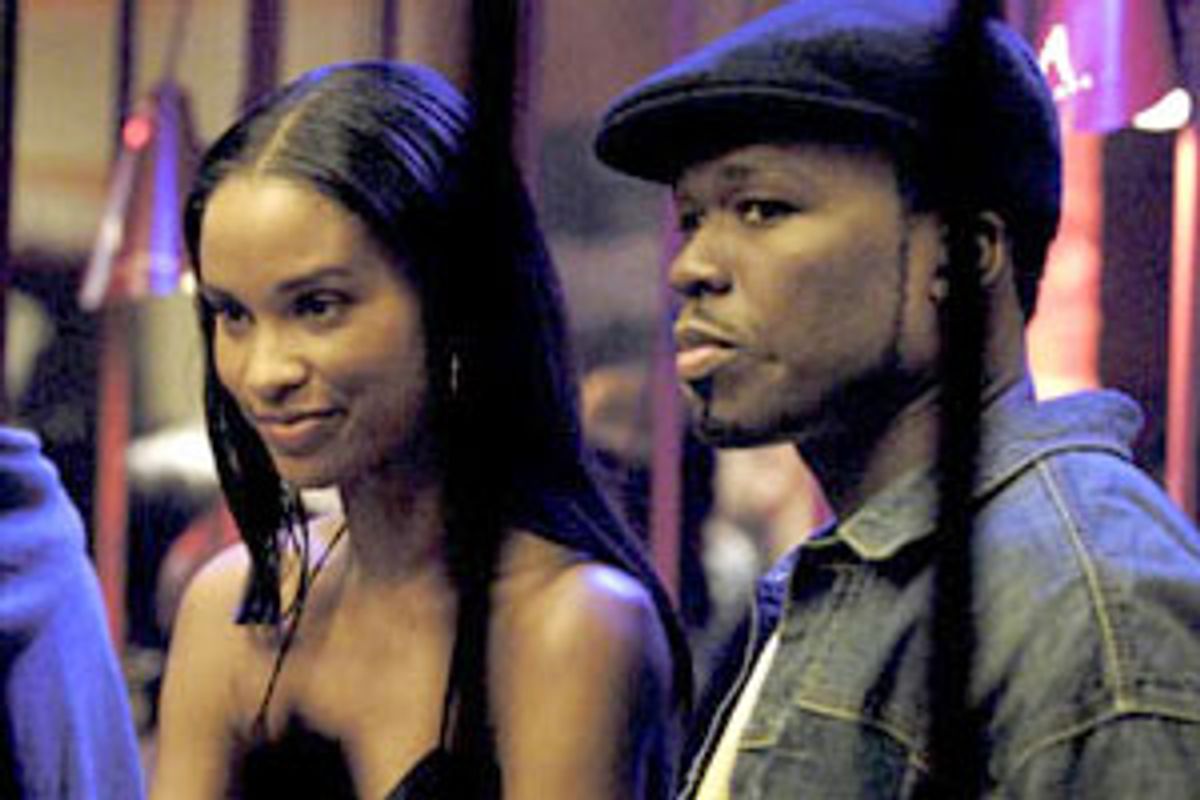 On the surface, Irish filmmaker Jim Sheridan seems like a weird choice to direct the acting debut of Curtis "50 Cent" Jackson, the ghetto melodrama "Get Rich or Die Tryin'." Then again, Sheridan's movies often take place on battlegrounds that are ideological, actual or both: Several of his pictures, specifically "In the Name of the Father" (1993) and "The Boxer" (1998), are set against the arduous conflict in Northern Ireland, and even when the Troubles aren't a driving force in Sheridan's movies, they're at least a specter.

Even beyond that, Sheridan has always been interested in the way political realities mesh with the complexity of family life. In "In the Name of the Father," Pete Postlethwaite and Daniel Day-Lewis play a father and son, two members of the Guildford Four, three Irish men and one woman who were wrongfully imprisoned for pub bombings in 1974. Their prison scenes are a potent distillation of the tensions that so often arise between fathers and sons: Postlethwaite and Day-Lewis, forced to eat in their cell because of the other inmates' hostility, argue over little things that stand in for bigger things. Postlethwaite, with forced jocularity, tries to convince his son that the food isn't so bad; Day-Lewis shoots back that the two of them might as well be guilty -- at least they'd get some respect among their new peers. Together they represent an atypical and yet wholly recognizable family dinner table; the scene is a flash of domestic poetry that captures the way extreme circumstances both strengthen and strain family connections.

"Get Rich or Die Tryin'" (its script is by Terence Winter) is glancingly biographical, incorporating elements of Jackson's real-life story: He was born and raised in Queens (although the movie is set largely in the South Bronx) and he dealt drugs, served time and, at one point, nearly died after receiving multiple gunshot wounds; in between all of that, he worked long hours perfecting the rapper's art. But if nothing else, "Get Rich or Die Tryin'" is a family story: We first meet Jackson's character, Marcus, as he and his friends (among them Bama, played with whispery bravado by Terrence Howard) hold up a check-cashing outfit. The robbery almost goes awry, but after Marcus and his pals get away with the money, a gunman, his face masked by a cotton kerchief that's all the more sinister for looking so ordinary, guns him down.

As he waits to die, Marcus reflects on his life: We see him as a kid (played by Marc John Jefferies) with his mom (Serena Reeder), the two of them singing along, boisterously, to Chaka Khan on the car radio. When his mother, who keeps him in the latest sneakers by dealing drugs, is killed, Marcus is forced to live with his grandparents (played, wonderfully, by Viola Davis and Sullivan Walker) in their already too-crowded house. We know we're watching a Jim Sheridan movie when we see Marcus sitting down to the raucous family dinner table only to realize, too late, that one of his young cousins has cheekily snatched food off his plate, an act of mischievous competitiveness in a house (not to mention a world) where there's just too little of everything to go around.

But for Marcus, who never knew his father -- and doesn't even know who he is -- this new adoptive family isn't enough. He starts selling drugs himself and cultivates a family of his own choosing, led by midlevel drug dealer Majestic (the extraordinary Adewale Akinnuoye-Agbaje, in a performance rife with treacherous glamour). Majestic, in turn, answers to the neighborhood drug kingpin, Levar (the imposing, unnervingly dignified Bill Duke). Their world is a battleground in which winning means making enough money to "get out," although getting killed is, as the movie's title suggests, the most proven way of doing that.

According to the press notes for "Get Rich or Die Tryin'," Sheridan is a longtime hip-hop fan. But there's never any doubt that the movie was made by an outsider, by someone who's as far as you can get -- in the literal sense, at least -- from being ghetto. And that's precisely what makes "Get Rich" as entertaining and as effective as it is: Sheridan is so willing to enter the emotional world of this story that he doesn't care whether or not he fulfills our basic expectations of what a gangsta-rapper picture should be. Instead of handing us the kinds of stereotypical gangsta symbols that we all pick up from reading magazines and watching TV, he gives us believable details that aren't quite what we'd expect: A more obvious director might put a "Scarface" poster on Majestic's wall, but in Sheridan's movie, Majestic's hero of choice is Dizzy Gillespie.

This isn't Sheridan's most complex or richest picture, but there's lots of life to it: This is an unapologetically glossy pop product, powered by a strong, old-fashioned sense of B-movie melodrama. And while Sheridan takes great care to make sure the violence in "Get Rich" isn't presented for our enjoyment or delectation, he doesn't make the mistake of trying to cut it down to an acceptable level of tastefulness, either. In the movie's most brutal scene, a prison inmate manages to sneak a knife into the communal shower, lunging at a fellow prisoner just as the water starts to spray down. The scuffle that follows is at first vaguely comical -- the men's legs fly out from under them as they scramble to keep their footing on the slippery floor. But when the guards realize what's happening, they move in with their weapons raised, and the soft thud of their clubs against these wet, naked bodies is far more horrifying than the sound of gunshots would be.

Part of Sheridan's skill lies in the way he balances disturbing moments like that with lighter, funnier ones; his control of the movie's tone is sure-footed and precise. Just after that shower knife fight, two of the inmates, after being pulled from the melee, lie face-down on the floor, naked and handcuffed. They begin making chitchat: "You saved my life. Why?" says one. "I dunno -- you looked like you needed saving," says the other, with as much of a shrug as his compromised state will allow.

Ultimately, though, Jackson is the star attraction of "Get Rich or Die Tryin'," and the question of how well the picture hangs together depends largely on him. At the very least, he's intriguing enough to hold the camera's interest. But even though Jackson works hard here -- and holds his own against more experienced actors -- he may be so used to playing a gangsta rapper in real life that he can't quite open himself up enough to play an ordinary man. Marcus reconnects with -- and begins a relationship with -- his childhood crush, Charlene (the marvelously expressive Joy Bryant), and their scenes together are the ones in which Jackson is most charming and most believable. But at one point Charlene tells Marcus, "Men hide their feelings; you bury yours," and it's an accusation that may be more applicable to Jackson than it is to Marcus. There's something a little mean-looking about Jackson; his mask of macho self-protectiveness makes his expression hard to read.

That said, by the end of "Get Rich or Die Tryin'," I found myself feeling fiercely protective of Jackson's performance, constrained as it is. Marcus cries in one of the movie's pivotal scenes -- it's just one tear, but it counts. Members of the audience I saw the movie with (a large group including, but not limited to, critics) hooted at the scene.

Whether they laughed out of embarrassment or derision doesn't much matter. But Jackson had me during that scene, not because it was played with particular subtlety or skill, but because it suddenly became clear how determined he was to do whatever the role, and the movie, demanded. Whatever Jackson's limitations as an actor may be -- at this early stage, at least -- he manages to dominate this picture by sheer force of will. Face it: Jackson knows his audience, and he must have known he was risking their contempt by squeezing out that tear. He went ahead and did it anyway. You have to wonder what it means to Curtis Jackson to play a scene that 50 Cent would laugh at. Maybe Jackson has already conquered his toughest audience.