Did Italian spooks collude with American neocons to trump up evidence for war? 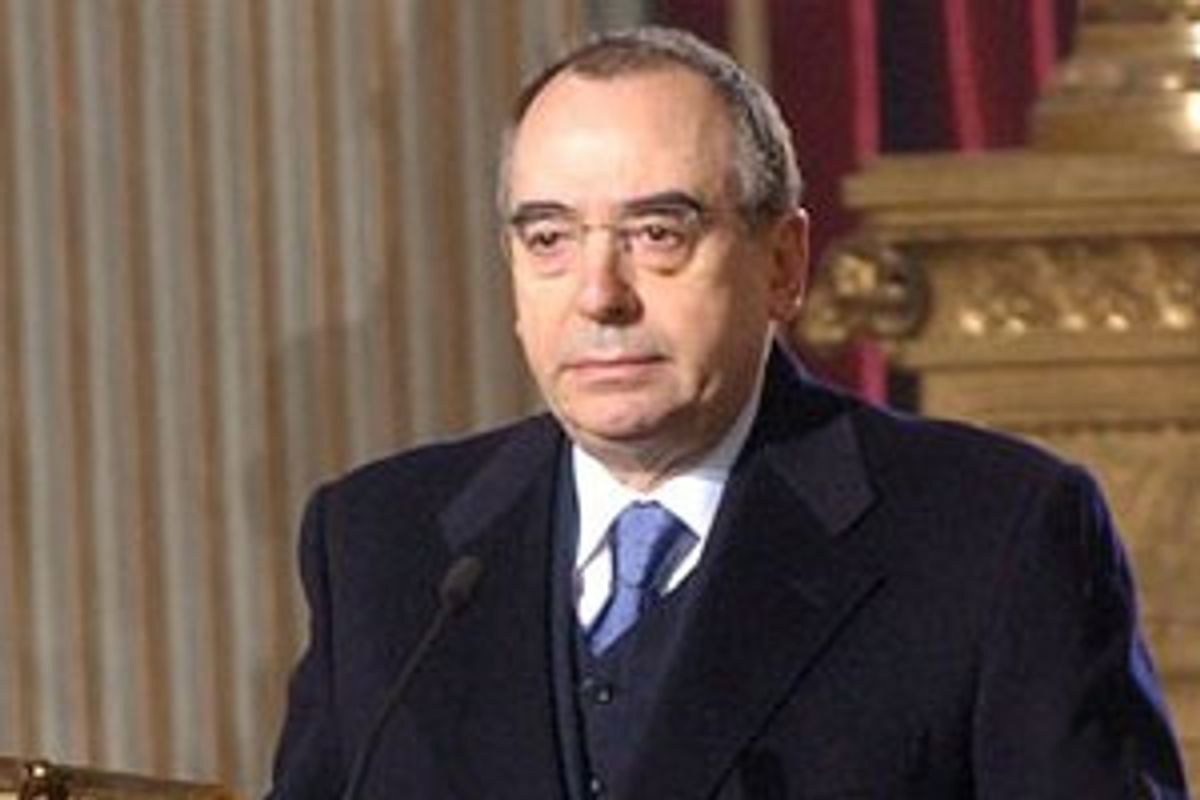 Rocco never met Scooter, but he did hang with Michael L. ... Gen. Nicolo and Sen. Massimo can't seem to get their stories straight ... Silvio may be in denial about the funky stamps ... and the yellowcake seems to have been baked in Italy after all.

Welcome to Italy's latest scandal, a dizzying tale that catapults the government of Silvio Berlusconi into the midst of the unfolding controversy over the Bush administration's trumped-up evidence for weapons of mass destruction. The faked documents formed the basis of George Bush's now-infamous claim in his 2003 State of the Union speech that Saddam Hussein had tried to buy nuclear material from the African republic of Niger, which was among the administration's most important justifications for the invasion of Iraq.

The Senate Intelligence Committee is beginning an investigation this week on how the Bush crowd came to use the bogus evidence, despite repeated warnings by the State Department and the CIA about the dubious nature of the dossier. But don't hold your breath for any dramatic revelations from the Republican-controlled committee. A recently terminated investigation by the FBI turned up nothing. Tellingly, the feds specifically exculpated the Italian secret service over allegations in the Italian press that it had a role in disseminating the forged documents. And just last week an intelligence oversight panel of the Italian Senate held closed-door hearings and found  nothing.

The real work of unraveling this scam has been coming from the press, both in the U.S. and Italy. Among the most dramatic revelations to date have been by investigative reporters Carlo Bonini and Giuseppe d'Avanzo, who co-wrote a series in the left-leaning Italian daily La Repubblica. According to Bonini and d'Avanzo, the Italian secret service, known as SISMI, hatched an elaborate plan to get the forged documents to the hawks in the Bush administration and still keep their hands clean. The reporters allege the falsehoods were propagated at the behest of Prime Minister Berlusconi, who was eager to help his new American friend make the case for war. While the articles do not go so far as to say Berlusconi knew about the scam, they do finger Italian intelligence chief Gen. Nicolo Pollari.

The bogus dossier at the center of the scandal is what President Bush relied on in his January 2003 State of the Union speech. The documents purport to show that Iraq tried to buy 500 tons of "yellowcake" uranium from Niger. Yellowcake is a type of concentrated uranium that can be used to make nuclear weapons. As it turns out, Niger, the world's second poorest country, was not involved in anything illicit other than the beginnings of a famine, which has not received one-hundredth of the press attention of the sexier WMD controversy.

The Niger uranium scams have led to at least one concrete result, although probably not the one the mysterious perpetrators intended: the indictment of I. Lewis "Scooter" Libby, chief of staff to Dick Cheney. Libby, like many white-collar criminals, was busted not for the crime itself but for lying to prosecutors about it -- in this case, what he knew about covert CIA agent Valerie Plame and whom he heard it from. The White House campaign against Plame appears to have been designed to discredit former Ambassador Joseph Wilson, who went public with his claims that the Niger-Iraq connection was a fabrication.

Which brings us back to Italy. According to the La Repubblica series, the source of the fake nuclear evidence was a disgraced Italian police official and former SISMI informer named Rocco Martino, who was working with a shadowy senior SISMI official named Antonio Nucera. The Italian secret service had tracked Martino's dealings with French and British officials and knew he was peddling the false documents, according to the reporters. Pollari, the SISMI head, admits in the stories that his service was tracking Martino. But in public statements since then he claims he was innocent as to the substance of his former informant's dealings.

Bonini told Salon it was clear that SISMI knew about the forgeries, not least because they were secretly passing on the story about the Iraq-Niger connection to pro-war hawks in the Bush administration. His claim has since been backed up by reporters from the American news agency Knight-Ridder. An Oct. 29 story by Jonathan S. Landay and Warren P. Strobel asserts that "Italy's military intelligence agency, SISMI, and people close to it, repeatedly tried to shop the bogus Niger uranium story to governments in France, Britain and the United States. That created the illusion that multiple sources were confirming the story."

The story quotes a U.S. intelligence official as saying, "SISMI was involved in this; there is no doubt."

As the documents were making their way to the American allies, Pollari, the SISMI chief, held a secret meeting in Rome with senior Pentagon officials, including hawks Harold Rohde and Lawrence Franklin (the analyst charged with passing unauthorized information to AIPAC, the pro-Israel lobby) and neoconservative civilian Michael Ledeen, infamous for his role in the Iran-Contra affair. According to La Repubblica, this paved the way for a Washington meeting between Pollari and Stephen Hadley, at the time the second in command at the National Security Council. It was Hadley who ultimately took the blame for the inclusion of the Iraq-Niger falsehoods in Bush's State of the Union speech. Hadley, who is today the president's National Security Advisor, told reporters last week that he has no "recollection" of the Niger uranium intel being mentioned at the meetings.

The La Repubblica articles make the case that the Italian secret service did not pass on the forgeries themselves, but instead talked up the information in them, as a way of setting up an intelligence "echo chamber." By keeping quiet about the forgeries, says Bonini, the Italian spooks could pass on seemingly valuable information without having to take responsibility if the scheme went awry.

"The question is why SISMI didn't ring the bell for U.S. that the documents were faked," Bonini told Salon. He noted that the unreliable Martino only played a small part in sourcing their story, and the majority of it came from contacts in Italian, U.S. and other foreign intelligence and diplomatic services.

SISMI and the Italian parliament, for their part, maintain that Martino cooked up the whole scam to make money. Martino, who by all accounts is as unreliable as they come, claims he was nothing more than a "postman" and didn't know the documents were faked.

What Martino knew about the Niger dossier, which apparently also included outdated 10-year-old Italian intelligence, is still far less important than what the Italian and the American governments knew. According to Knight-Ridder, a U.S. State Department WMD analyst cast doubts on the documents immediately upon seeing them. In the weeks before Bush's infamous Jan. 28 State of the Union speech, the analyst concluded the documents were crude forgeries, writing, "documents bear a funky Emb. Of Niger stamp (to make it look official, I guess)."

Both the Berlusconi and Bush administrations deny the allegations. But their denials raise more questions than they answer.

Berlusconi says neither his government nor the Italian intelligence agency had any part in the alleged scam. The La Repubblica stories threatened to damage the reputation of Italy, Berlusconi told the conservative newspaper Libero, saying, "If they were believed, we would be considered the instigator" of the war in Iraq.

Berlusconi's and SISMI's claims of innocence were recently bolstered by a clean bill of health from the U.S. Federal Bureau of Investigation, which announced on Friday, Nov. 4, that it had closed its two-year investigation into the fraudulent dossier. According to the New York Times, an FBI official confirmed reports that the agency had sent a letter to the Italian government on July 20 thanking it for its help and clearing the Italian secret service of disseminating the false documents.

But that is a bit strange, since, according to Newsweek, as of September 2004 the Italians had still not given the FBI permission to interview Martino. Moreover, the thoroughness of the FBI inquiry is itself questionable: Although Martino had visited the U.S. twice in the summer of 2004 to appear on television, and by the time of his second visit had been the subject of international press coverage because of his role in the scandal, the FBI reportedly never even attempted to interview him. In fact, to this date the FBI has never interviewed Martino.

The FBI did not return three calls by Salon asking for comment.

The Senate hearings also disclosed that the Italian intelligence agency first warned the U.S. and Britain about Iraqi attempts to buy uranium on Oct. 15, 2001, about a month after the World Trade Center attacks of Sept. 11, 2001. SISMI acknowledged that on that date it confirmed to the CIA that it had "intelligence data" provided by "a creditable source." (The "creditable source" was a female SISMI asset known as "La Signora," who according to the La Repubblica series took part in the forgery scheme.)

Italian officials have seemed quite confused about whether SISMI ever had the documents or not. In the wake of the hearings last week, Sen. Massimo Brutti told reporters that SISMI had warned the U.S about the fake dossier around the time of Bush's infamous State of the Union speech in January 2003. (The French, to whom Martino also peddled the bogus papers, and whom both Italian officials and neocon strategist Ledeen have accused of being responsible for peddling the fraud, alerted the U.S. to the fraud on Feb. 4, 2003.) But later that day he backtracked, calling Reuters and the Associated Press and saying that he had been mistaken, that SISMI never had the documents and therefore could not have warned about them.

After President Bush made his State of the Union claim that Iraq had been trying to buy uranium in Africa, the International Atomic Energy Agency investigated the Niger dossier. They proved them to be "a crude forgery" within two hours, according to Newsweek. What did the IAEA do that the American and British governments apparently hadn't? They Googled them.

The FBI may have closed its investigation of the Niger yellowcake forgery, but many questions about the role played by both Italy and by Bush administration hawks remain.

Samuel Loewenberg has written for the New York Times, the Economist, Forbes, the Nation and Playboy. He is based in Europe.