This deliciously intelligent adaptation of Jane Austen's beloved classic shakes off the dust and sparkles with life. 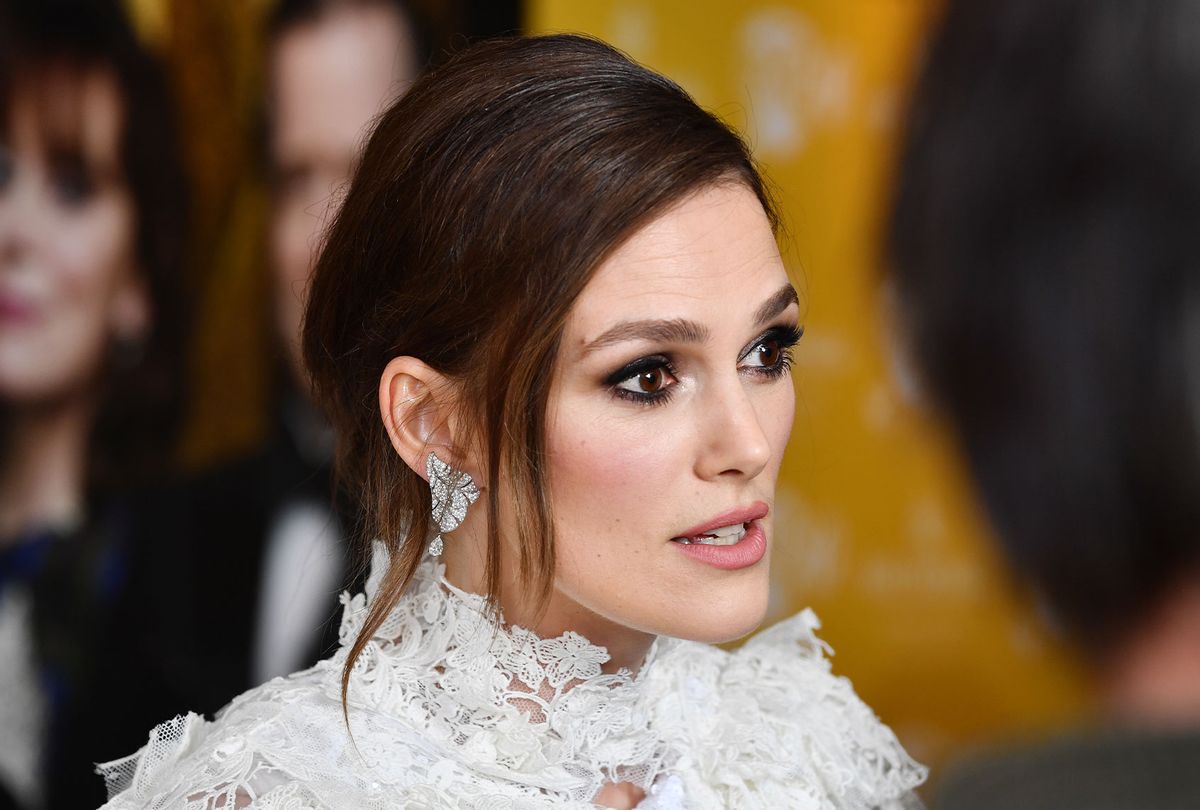 In Joe Wright's blissful, blazingly intelligent adaptation of "Pride and Prejudice," characters walk about with mud on their shoes. The women's hair is pulled back into simple chignons, but there are always a few brushy strands that won't stay put. Public dances held in country halls are messy and raucous, and the partygoers dance in imperfect though decorous formations, as if they'd learned the steps from a favorite aunt or uncle and not from a choreographer. We even get a glimpse of an extremely realistic farm hog, unneutered, unprettified, and wholly unconcerned with being a movie star.

In this "Pride & Prejudice," we can understand at a glance how much, or how little, money means to any given character: We can read anxiety or confidence in the cut of an overcoat, in the type of knickknacks that decorate a room, even in the set of a character's shoulders. In this "Pride & Prejudice," realism isn't a punishment, but a kind of music, a sound that cuts from Austen's day to ours with the clarity of a strong radio signal. There isn't a frame in the picture that doesn't feel alive and immediate, instead of merely faithful.

Austen's novel, written in 1797 but not published until 1813, is one of the most fiercely beloved books in the English language, and those of us who love it are ferociously protective of the characters at the center of it: Twenty-year-old Elizabeth Bennet (here played by Keira Knightley), whose intelligence is her greatest gift and whose cleverness is her greatest burden, and Darcy (Matthew Macfadyen), a young man of privilege and breeding who unconsciously hides his sensitive, fine-grained character behind a scrim of snobbery. The casting here is more perfect than in any "Pride & Prejudice" adaptation I've seen (I confess I'm not a fan of the popular 1995 British miniseries, which I found so slow, proper and reverent that it seemed a direct inversion of the spirit of the book), and Wright is fearless in his handling of the characters, refusing to bow to their iconic stature. It's as if he's unraveled every golden thread we've spun around Elizabeth and Darcy over the years to reveal living, breathing people underneath. He's saved them from the mummification of our love.

"Pride & Prejudice" opens with a shot of the English countryside, but even then, it's not the generic assemblage of kelly-green rolling hills we usually get, scenery for scenery's sake. This landscape is a misty blue-green, and it hasn't quite woken up yet, although the birds twittering on the soundtrack are beginning to nudge it toward consciousness -- an early promise that Wright is more interested in action than in tasteful, period lethargy. Knightley's Elizabeth Bennet (Lizzy to her family) is of a piece with this landscape. While Knightley has the kind of face that's universally considered beautiful, her beauty feels muted here -- it's deferential to her expressiveness. The alertness in her eyes, the way her smile seems to crack out of nowhere like a sliver of sunlight on a cloudy day: Everything about her speaks of serene, as opposed to brash, self-confidence and intellectual mischievousness.

She needs to bring all of that intelligence and fortitude to bear when dealing with her family: Lizzy is the second eldest of five girls, who, because they weren't born male, can't inherit the modest estate of their father (Donald Sutherland). Because of that, their flighty, featherbrained mother (Brenda Blethyn) is desperate to marry them off to make sure they're well provided for, and when she learns that a rich young bachelor, Mr. Bingley (the affably redheaded Simon Woods), is renting a nearby estate, her fluttery desperation blossoms into behavior that's garish and embarrassing.

As it happens, Bingley is completely charmed by the eldest Bennet daughter, Jane (Rosamund Pike), but his best friend, Darcy, brushes the Bennets off as if they were gnats. After he first sees Lizzy at a public ball, he tells Bingley, within her hearing, that she isn't handsome enough for him to even dance with, a line that fuels Lizzy's contempt for him and spurs her to find ways to cut him down.

And when we first see Macfadyen's Darcy, our feelings mirror Lizzy's, as they should. His face is an imperious, highfalutin blank; his eyes look a little small and dull; his nose might have been molded, badly, out of clay. We wonder, as she does, what on earth makes him think he's so hot? Macfadyen's natural handsomeness is perfectly obvious in these early scenes, and yet he keeps us from seeing it. That's the key to Darcy, and Macfadyen carries it, effortlessly, in his pocket.

"Pride & Prejudice" moves fast -- it doesn't unfold languorously, the way many adaptations do, as if they were desperately trying to mimic the experience of reading. But everything in it feels essential, and in that way, watching it is like reading. As historically authentic-looking as "Pride & Prejudice" is, it has far more invested in emotional authenticity -- you feel engaged every moment. The script, by Deborah Moggach (reportedly, it received some fine-tuning by an uncredited Emma Thompson), preserves the essence of Austen's language even when that language needs to be streamlined or paraphrased for dramatization's sake. For instance, when Lizzy's best friend, Charlotte Lucas (the hugely appealing Claudie Blakley), announces that she's going to marry the Bennets' dull cousin, the vicar Mr. Collins (Tom Hollander, who, in his prim preacher's garb, gives a marvelously understated comic performance), the news has a double sting for Lizzy: Collins has already proposed to her, and she has declined without giving it a second thought. Her mother, distressed at this news, has told Lizzy she'll never see her again if she doesn't immediately agree to the marriage. "And I will never see you again if you do," says her father, who has spent more than 20 years suffering the nonsense of his ridiculous wife, but who won't let Lizzy become a victim of it. (Sutherland's performance is astonishing: His protectiveness of Lizzy, in this scene in particular, has the aura of good-natured humor about it, but the anxiety that shadows his face is heart-rending -- this is a man nearing the end of his life who realizes he has no way of guaranteeing the happiness and well-being of his favorite daughter.)

What's more, Collins is crucial to the Bennet girls' welfare because he stands to inherit the Bennet estate. Even though he's a distant relative, he's the closest male relative, and so Lizzy's rejection of his proposal means she's letting the family's meager, if comfortable enough, fortunes slip through her fingers. Knightley (an actress I have not been able to bring myself to fully like, until now) plays the moment beautifully: Her face is lit by a rare flash of petulance, which softens when Charlotte -- who is nearing 30, and whose plain, pleasant face doesn't have the vibrant character that Lizzy's does -- says to her, "Not all of us can afford to be romantic."

The line is a condensed reimagining of what Charlotte actually says in the book, but it's an arrow that flies true. "Pride and Prejudice" is often treated as a forerunner of modern romantic comedy, which it is. But it's also a novel in which economic and social constraints are inextricable from romance. I'd argue that Austen's awareness of the importance of money makes the story more romantic rather than less: This isn't a story about people running off together, saying "Money be damned!"; it's about people coming dangerously close to turning down love, simply because their concerns about how they're going to live must come first.

And that's an angle of Austen's book that Wright understands better than anyone who's ever adapted it. This is Wright's first movie (he has previously made features for British television, including a miniseries about Charles II), and until he was approached by producers Tim Bevan and Eric Fellner, he hadn't even read the novel. When he finally did read it, he realized, as he says in the movie's press notes, that Austen was "one of the first British realists."

That's the kind of brilliant observation that makes the difference between a vital adaptation and a merely faithful one. Wright chose to focus on Austen's realism instead of going for what he calls "the picturesque tradition" -- the sort of thing where the camera lingers forever on dumb candlesticks just to show us how perfectly of-the-period they are. Cinematographer Roman Osin shoots "Pride & Prejudice" as if it were an action picture, not in the sense of giving us flashy car chases, but in the sense of rejecting cushy compositions. There's always something happening in the frame, even if it's just the arch of a character's eyebrow. At one point, Osin's camera pans slowly from a crowded ball to a quiet, darkened room, where we see a pensive Lizzy framed within the shadows, like an Ingres painting come to life. And in one of my favorite moments, the scolding Mrs. Bennet chases after Lizzy as she runs out of the house, frustrated by her mother's ditziness. A bunch of nearby geese seize the opportunity to run after her, craning their necks and flapping their wings, talking crazy talk as geese do -- but even in their absurdity, they make more sense than Mrs. Bennet does.

Those geese notwithstanding, there's nothing in "Pride & Prejudice" more exhilarating than the mere sight of Darcy and Lizzy. Macfadyen and Knightley's scenes together have a crisp surface texture that gradually gives way to the layers of vulnerability beneath. Both performances build in intensity and complexity, independently and in tandem. Darcy and Lizzy are falling in love not so much during their moments together as between them, and the actors clue us in to the interior action with small, nearly invisible gestures -- a hesitation here, a nervous bit of finger wriggling there. In one of the movie's loveliest scenes -- which takes place at a second ball, much more lavish than the first one, at which Darcy and Lizzy first met -- they finally do deign to dance together. And the flickers of conversation they manage to fit in between the steps tell them things about each other that, in their now firmly cemented dislike for each other, they don't want to hear.

As the dance winds down, and the conversation does too, the other revelers around Lizzy and Darcy gradually dissolve, a visual effect that makes perfect metaphorical sense, and not just because all lovers inhabit their own private world. Lizzy and Darcy have literally been separated from the pack -- from the noise and the color and the distractions of other human bodies -- and for the first time, they're left alone with the terrifying potential of what, together, they could be. It's a possibility neither of them can face up to just yet, and so they hand it to us, temporarily, for safekeeping. It's our responsibility, and our pleasure, to hold their secret for them until they finish the dance.