Welcome to the next 10 years of Salon

Some things old, some things new, and a promise to keep inventing journalism that's fearless as well as fun. 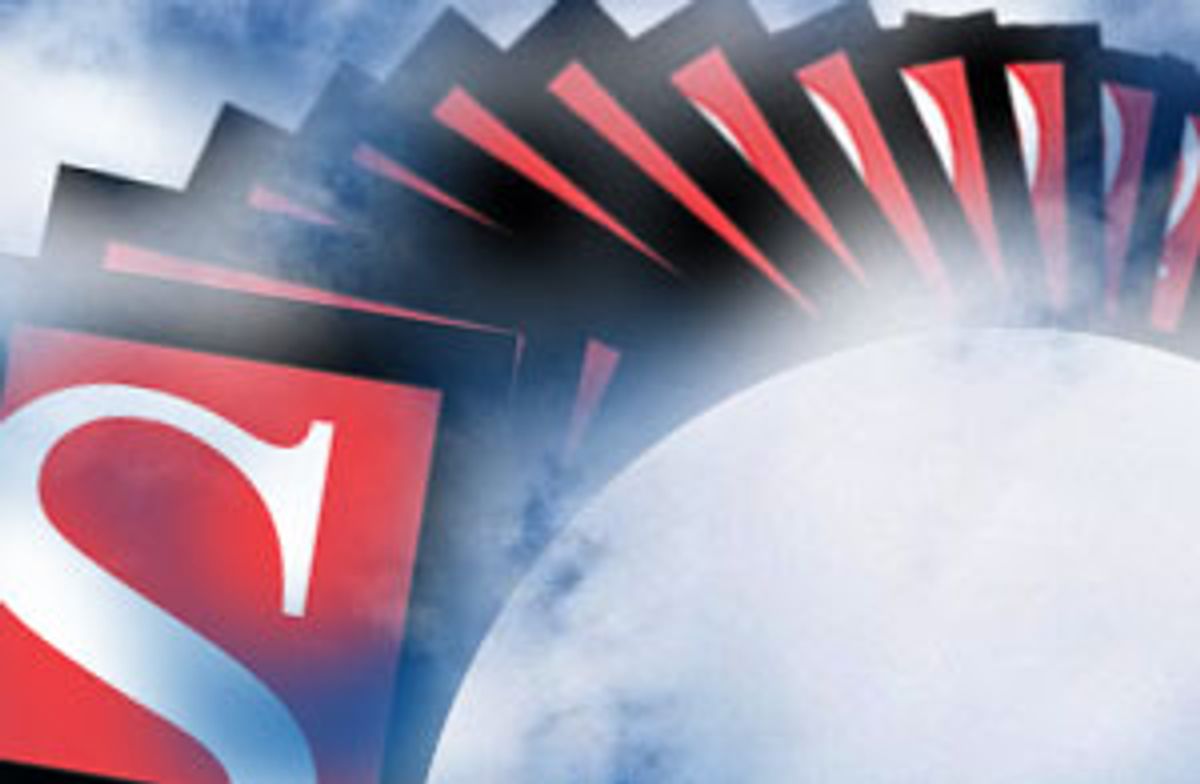 At a citizens' media conference early this year, a titan of the movement announced to me that in a world suddenly captivated by blogs and participatory journalism experiments, Salon was now, sadly, "old media." I politely kept quiet, but I had two reactions. One was to respond the same way I shrug off getting older: It's better than the alternative, especially given the exaggerated rumors of our demise a few years back. The other was, We'll show you.

At 10, is Salon "old media"? On one level, who cares? Born in 1995, Salon is new compared with the New York Times or the Nation, and relatively old if we're talking about the Huffington Post or the still-unborn Pajamas Media. But if "old" is a synonym for stodgy, irrelevant or shut off from the latest energy of the Web, of course we're none of the above. For me, two qualities make today's wave of "new media" new: the willingness to tackle questions that established media can't, or won't (or can't or won't do well), and an openness to the creativity of the audience, whose members no longer want to be passive consumers, but to comment and even create work of their own. After 10 years, Salon is still doing the first, and while we've been uneven about the second, a new partnership with our audience is one of the things I'm proudest to showcase as we start our second decade.

I'm proud of many things, old and new -- first and foremost our amazing staff, founders and newcomers alike. And I'm proud of the new features we've unveiled in the last 10 months -- although the changes began in 2004, when we introduced War Room, our first blog (which is now the most popular feature on Salon), and began to plan our redesign. In 2005 we made more additions, rolling out our daily music download column, Audiofile, and our popular meta-blog, the Daou Report, early in the year. In just the last month, the pace of change got faster: We launched our redesign, our new automated letters and blog comments, and a smart and funny women's news digest, Broadsheet; and later this week we'll bring you Video Dog, our new video blog that will go out and fetch great TV and video moments that happen while you're doing something else. You'll get attached quickly, the way we have at Salon.

And we're not just adding new features, but new staff as well. We're beefing up our Washington bureau to get ready for the 2006 elections. Having hired Michael Scherer as our Washington correspondent in July, I'm thrilled to announce we've lured Walter Shapiro as our Washington bureau chief. The author of "One-Car Caravan," an early guide to the roster of '04 Democrats running for president, Walter has worked for Time and Newsweek, has been a political columnist for USA Today, and was Esquire's man in the Clinton White House in the administration's early years; most recently he's been blogging on the Huffington Post. He's just the person to cover the battle for the soul of both the Democratic and Republican parties that is shaping up for the midterm elections next year, and which will only get more intense as we get closer to '08. He'll write and edit and help us break news and be the best political reporting site on the Web.

Just to keep mixing up the old and new, we've got some wonderful Salon veterans coming back from book leave as well -- Michelle Goldberg returned last week as a senior writer, and Scott Rosenberg comes back in January to spearhead our many audience-generated content projects. That we're able to attract great new talent as well as bring back former staff is, I think, a tribute to Salon's vitality and resilience as a place where people know they can do their best work, for the best audience in journalism today.

I still feel awestruck by Salon, because I came to it first as a reader, then as a contributor, then as its first full-time news editor, now as editor in chief. I'm not a founder, so my love was kindled as an outsider looking in. A writer on issues of education, race, poverty and women, and the divorced mother of a then kindergartner, I thrilled to the wild mix of topics on Salon, along with the passion and intelligence of the writers David Talbot had assembled. In those early years I got to read and occasionally write about everything that mattered to me -- motherhood, race, divorce, the crazy right-wing jihad against the Clinton administration (and the media's passivity and even collusion in the face of it), sex, books, television, movies, baseball. I came to work here just three weeks after the Henry Hyde story, which seemed to define what made new media new, in 1998: the fact that so many established news organizations considered publishing the story, but passed, deciding Hyde's long-term extramarital affair wasn't "news," although the GOP leader was trying to impeach the president for comparable behavior. I think history shows Salon was right, and they were wrong -- the Monica Lewinsky scandal really was about sex, not "lying under oath," and the hypocrisy of the president's would-be political executioners mattered. "New media" got it right.

Ten years after its founding, of course, Salon is changing, has to change, to keep up with both old and new media, to keep pace with our audience -- and, quite honestly, to expand our audience. We're still covering stories other media can't or won't: This year alone, our unseen Iraq gallery, Phillip Robertson's "The Victim and the Killer," our Scientology series and our Hurricane Katrina coverage will go down in history among our best stories of the decade. Our questions, our curiosity, our impertinence are all still necessary, and sadly noteworthy. The media's passivity (with some exceptions) in the face of the Bush administration's intimidation and manipulation, especially after 9/11 and in the run-up to war with Iraq, proved that new and independent media voices are vital. I'm glad to say a lot of the mainstream media woke up thanks to the awful trifecta of Katrina, Plamegate and 2,000 dead in Iraq, but it's hard not to think that media upstarts on the Web and elsewhere helped ensure that they didn't just roll over and ignore those wake-up calls.

Even as we maintain our commitment to crusading independent journalism, investigative reporting and personal essays, a Washington bureau and regular culture coverage, we're also experimenting with new features and new forms. The media landscape is in constant flux; it's changing as I write this, as you read it. Newspapers and nightly network news programs are losing their audience, younger people are flocking to the Web, but in addition to getting news there they're downloading music and video and staying in touch with friends. That's the reality that old and new media have to keep up with, and that's what we have to keep sight of as we plan the next 10 years of Salon.

The challenge has been to stick to our founding principles and vision and values, while adapting and changing with the rest of the Web. For a few years, by necessity, we fell behind, just to stay alive. It wasn't all bad news: We developed an innovative business model -- watch an ad, or become a Premium member -- and we turned to our readers who supported us with their subscription dollars. We succeeded, but in a state of suspended animation, in a way, with little ability to invest in new technology or innovation. And while our readers were crucial in keeping us in business, we weren't really opening ourselves up to their ideas and their creativity, even as the rest of the Web, from Daily Kos to Flickr, was showing how much the so-called audience had to contribute.

That's begun to change this year, with our letters automation, our blogs and new features like Video Dog (soon we'll let you upload your own videos there). All these changes, though, are very old Salon, as well as new: We've always been committed to covering culture as well as politics. We know you want to talk back to us and talk to one another -- you have since the days of our founding, when we launched our innovative online community Table Talk. And we know you love to read our investigative features and cultural commentary, but many of you also download music and watch video. We're making it easier to do all of that, on Salon.

The feedback to our changes to date has been heartening, and enormously helpful. We adjusted our redesign in response to your suggestions, and we're still a work in progress. That's life on the Web. Traffic to our new features is strong. But we know there have been some concerns. I hear two questions a lot: One, are we "blogifying" Salon, substituting bite-size news nuggets and commentary for hard-hitting, long-form journalism? The answer is no. I hope you'll see in the months to come that the blogs and new features have been an addition, not a subtraction.

Another question is, are we trying to appeal to "younger" readers with our efforts in audio, video and blogs like Broadsheet. We think these are features our core audience will enjoy, but yes, we're also looking to expand, and to have a wider conversation, with readers young and old. We're blessed, being on the Web, to work in a medium that's attracting the attention of younger readers and news consumers, while many wring their hands about young people abandoning newspapers and news generally. So we think we have a chance to talk to an emerging generation, to reach them with our political and cultural coverage, to enlighten as well as entertain, and to learn from them, too. Plus, I'm just not a hand-wringer; the kindergartner I had when Salon was born is now a teenager; she and Salon and I have grown up together. Having shared a house with Jon Stewart and MySpace, Instant Messenger and "America's Next Top Model," I love the challenge of talking to a new generation, as well as to my own.

I'm thrilled to start our second decade, somewhere at the intersection of old and new media. At another conference recently with some "old media" colleagues I was on the receiving end of a nicer observation, when a reader asked my panel: Why was Salon the first news outlet to really focus on issues of race and poverty in Hurricane Katrina coverage? Was it because we're "new media"? I said I thought it might work the other way around: The fact that we wanted to take risks and ask tough questions first is what made all of us at Salon jump out into "new media" 10 years ago. And as long as we keep doing those things, we'll always be new, no matter how old we get.