Silverman is as funny as ever, but do we really need to see her strolling around, decked out like "That Girl" and singing about racism? 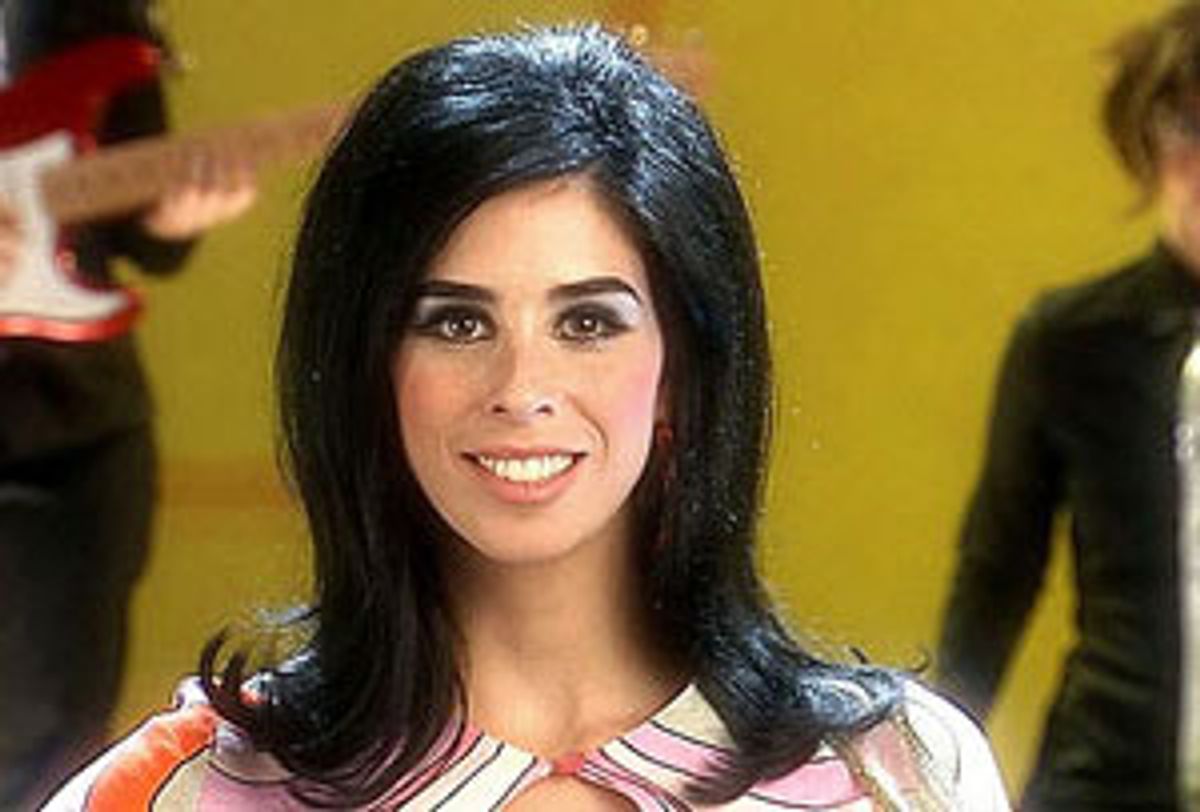 The artistry of stand-up comic Sarah Silverman -- the weirdly concrete subtlety of jokes like "Nazis are A-holes, and I'll be the first one to say it. 'Cos I'm edgy" -- is so austere that the last thing it needs is clutter. And that's the chief problem with "Sarah Silverman: Jesus Is Magic." The picture consists mostly of performance footage of Silverman, which, despite the fact that it's shot on grainy, anemic-looking digital video, is a pleasure to watch. But the performance is chopped up and intercut with musical numbers and set pieces in which Silverman shows up in crazy get-ups to sing songs that often repeat the punch lines of her jokes. The movie lures us into that forbidden garden where the funniest things are precisely the things we're not supposed to laugh at, only to yank us out of that paradise and draw our attention to the things it desperately wants us to laugh at.

So just as we find ourselves easing into the unsettling, alluring rhythms of Silverman's patter (about, say, the dangers of using words like "Chink" on TV even when you're making a joke that's implicitly, if not overtly, anti-racist), we're whisked away from that auditorium, and away from the illusion that we're part of that live audience, and confronted with pieced-in footage of Silverman wandering around a set, troubadour-like, in a Marlo Thomas "That Girl" dress and hairdo, singing a song about racism.

The incongruity of it all is what's supposed to be funny. But Silverman doesn't need to manufacture clever, faux-ironic gags to get laughs: Even without costumes, she's a vision of incongruity, which is part of what makes her act, and her persona, so alluring. Silverman's hair falls in a smooth, enviable Breck-girl sheet around her shoulders; her skin has a creamy glow that suggests innocence, in direct contrast to the stream of unthinkable thoughts that issue, uncensored, from her lips, the sort of things that nice girls shouldn't think, let alone say. Part of her genius is the way she uses her girlish twang to lull us into easy complicity. When she shoots a caustic arrow of social commentary like "I think the best time to have a baby is when you're a black teenager," she delivers the line as if she were telling us what she bought at the mall that day.

And as with most comics, the very thing that makes Silverman so brilliant is exactly what frustrates and angers people about her. Ancient talk-show host Joe Franklin has said he's considering suing Silverman because of the particularly transgressive routine she contributed to Paul Provenza and Penn Jillette's marvelous documentary "The Aristocrats," about the filthiest joke in the universe, in which she spins an obviously false tale about how Franklin raped her when she was a kid on the vaudeville circuit.

The absurdity of the story is exactly what made it so funny. (As Provenza said of Silverman's version of the joke in a recent New Yorker article: "If the choice of who raped her was anybody but Joe Franklin, we couldn't deal with it. But by making it Joe Franklin she spins it off into absurdity yet again. Imagine Joe Franklin being sexual. There's an irony in that alone.")

But the gag also makes you feel vaguely nervous, maybe a little bit queasy. You know it's OK to laugh, but there's still a part of you that wonders if maybe you shouldn't. The best parts of "Jesus Is Magic" all work on that principle: Silverman's favorite subjects are rape, racism and the Holocaust (although not particularly in that order), and her riffing often leads us into some very dark places. She talks about her late nana having been a Holocaust survivor, but assures us that she was lucky, because she was in one of the "better" camps. (She even had a vanity tattoo, Silverman says. It read "Bedazzled.")

Even if a joke like that makes you laugh, it also leaves you wondering what earthly purpose it could serve. There is a point of view in Silverman's humor: She despises hypocrisy, and the way people make facile, fake pronouncements about serious issues just to make it look as if they actually give a damn.

But Silverman's humor doesn't always have an overtly obvious purpose. As she notes at one point in "Jesus Is Magic," she's a serious comic who deals with serious issues. She waits a beat: "Learnmady is what I call it." Silverman's gags don't come with that reassuring gleam that tells us we're learning something even as we're laughing. The gleam is implicit -- we are learning something, even though we may not know exactly what it is. But Silverman's great gift lies in her refusal to reassure us: This isn't humor that allows us to congratulate ourselves on how tolerant or sensitive we are, on what lengths we've gone to become the thoughtful, engaged people we are. Instead, it leaves us dangling nervously, and questioning deep in our hearts, whether we've really gone far enough.