Bush has stacked his foreign advisory board with his Texas business pals, who stand to profit from access to CIA and military intelligence. 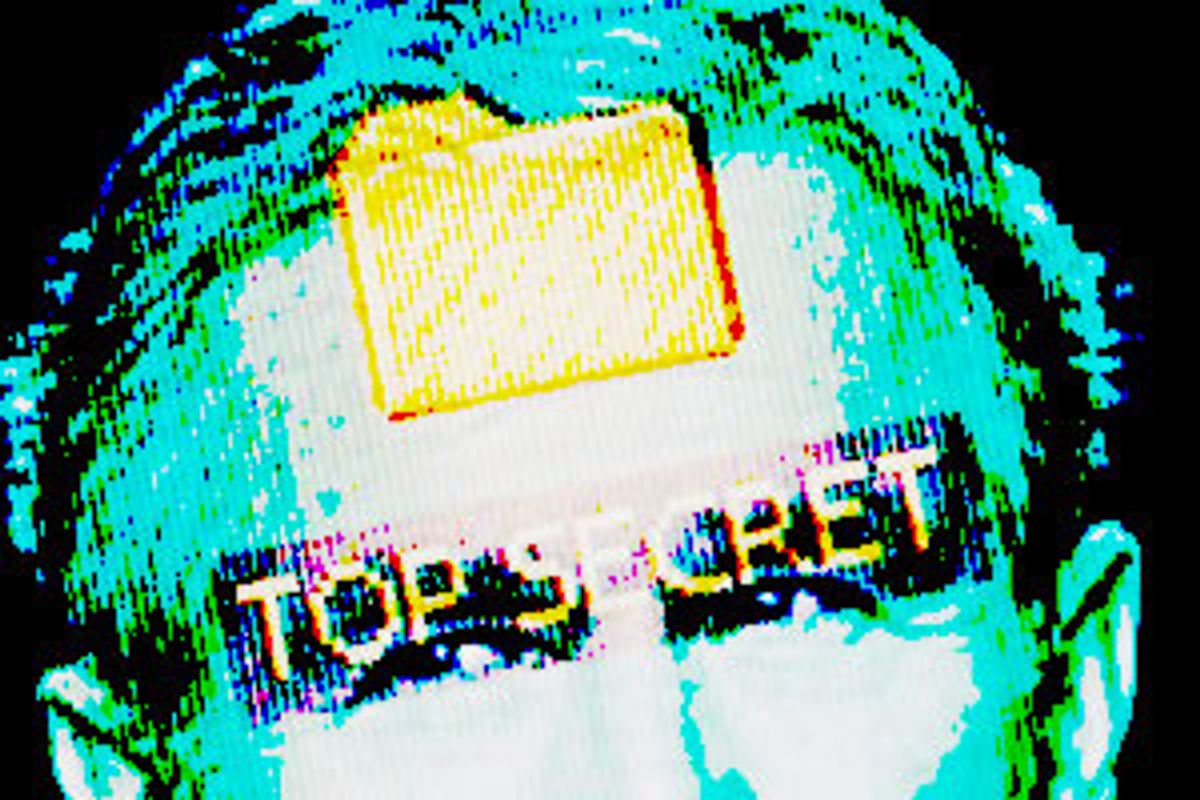 No discussion of cronyism in the Bush administration would be complete without talking about PFIAB, short for the President's Foreign Intelligence Advisory Board. George W. Bush's latest appointments to the PFIAB, which advises the president on how various intelligence agencies are performing, represent a who's who of the Halliburton-Texas Rangers-oil business crony club that made Bush into a millionaire and helped propel him into the White House.

On Oct. 27, an announcement by the White House made it clear that despite the disastrous intelligence failures that have been driving Bush's policies over the past few years, he's not going to put up with any independent voices on the PFIAB, especially from anyone who might actually know something about foreign intelligence, like, say, Brent Scowcroft.

In 2001, Bush appointed him to chair the PFIAB. But Scowcroft, who was national security advisor under two presidents, George H.W. Bush and Gerald Ford, has been openly critical of Bush's decision to invade Iraq. "I don't think in any reasonable time frame the objective of democratising the Middle East can be successful," Scowcroft recently told the New Yorker. "If you can do it, fine, but I don't think you can, and in the process of trying to do it you can make the Middle East a lot worse." That kind of independent thinking led Bush to dismiss Scowcroft from the chairmanship of the PFIAB about a year ago.

With Scowcroft out, Bush's cronies are in. Last month, the White House announced that Dallas oil billionaire Ray Hunt, one of Bush's biggest financial backers, was reappointed to the PFIAB. So was Cincinnati financier William DeWitt Jr., who has backed Bush in all of his business deals going back to 1984, when DeWitt's company, Spectrum 7, bailed out the faltering entity known as Bush Oil Co. The new appointee of note to the PFIAB is former Commerce Secretary Donald Evans, a Bush confidant since his days in Midland, Texas.

Ray Close, a member of Veteran Intelligence Professionals for Sanity, a group that has been critical of the Bush administration's handling of intelligence matters, doesn't mince words when discussing Bush's latest appointments to the PFIAB. "It's unbelievable," says Close, who worked for the CIA for 27 years as an Arabist. "I can't imagine anyone who has the president's interest in mind allowing him to do this. With the notable exception of Lee Hamilton, most of the choices look very weak, and several scream of cronyism."

Created in 1956 by President Dwight Eisenhower, the PFIAB is designed -- according to the White House press release -- to give the president "objective, expert advice." In an ideal world, the PFIAB members would analyze the intelligence they get and give the president their unvarnished opinions about the relative merits of the different agencies and the work they are doing. PFIAB members are granted access to America's most secret secrets, known as SCI, for Sensitive Compartmented Information. Members of PFIAB have security clearances that are among the highest in the U.S. government. They have access to intelligence that is unavailable to most members of Congress. They are privy to intelligence from the Central Intelligence Agency, the National Security Agency, the military intelligence agencies and others.

Everything that members do as part of PFIAB is done in secrecy. None of the information that they discuss or view is available to the public. They are not subject to the Freedom of Information Act. And unlike other public servants who work for the president, there is no public disclosure of the PFIAB members' financial interests.

In 1999, the PFIAB opened up slightly when it released a report about security at the Department of Energy's nuclear labs. That 1999 report is a prime example of how the PFIAB has -- and could in the future -- play an important role in helping the president deal with intelligence issues. That report bluntly assessed the DOE, saying that a "culture of arrogance -- both at DOE headquarters and the labs themselves -- conspired to create an espionage scandal waiting to happen." That report led to a major reorganization of the labs.

Despite the PFIAB's power, coverage of it by the news media is sparse. Bush's most recent PFIAB appointment was almost completely ignored. The only significant story by the national media on the PFIAB was a snarky item posted on Newsweek's Web site on Nov. 2, which said that after all the recent intelligence failures, "you might think the president would be wary about the appearance of cronyism."

To be fair, the PFIAB has long been stocked with people close to the president in office. Under Bill Clinton, the PFIAB had far more intelligence expertise than it does now. Clinton's PFIAB appointments included former Defense Secretary Les Aspin, former Speaker of the House Tom Foley, and a former chairman of the Joint Chiefs of Staff, Adm. William Crowe. Clinton also appointed a pair of his big money contributors to the PFIAB: New York banker Stan Shuman and Texas real estate whiz Richard Bloch.

For Bush, it appears that campaign cash counts far more than expertise. And few backers have given Bush's campaigns more cash than Ray Hunt, son of the legendary Dallas billionaire bigamist oilman H.L. Hunt. PFIAB membership is a plum position for Hunt, who raised about $100,000 for Bush during the 2000 campaign and also served as the finance chairman of the Republican National Committee.

Hunt's position at PFIAB may benefit a familiar entity in the Bush crony network: Halliburton, which is doing billions of dollars' worth of reconstruction and logistics work for the U.S. government in Iraq and on the Gulf Coast. Hunt sits on Halliburton's board of directors. He got his spot on the Halliburton board in 1998 while Dick Cheney was running the company. As soon as Hunt got on the Halliburton board, he was put on its compensation committee, where he helped determine Cheney's pay. Indeed, in 1998, Hunt's committee decided that Cheney deserved a bonus of $1.1 million and restricted stock awards of $1.5 million on top of his regular salary of $1.18 million.

Hunt has been on the PFIAB since 2001. Presumably, months ahead of everyone else, he had access to intelligence indicating that the Bush administration was going to invade Iraq -- information that could have been of value to certain oil service companies with operations in the Middle East.

Hunt isn't the first Halliburton board member to be tied to PFIAB. From 1982 to 1990, the PFIAB was chaired by Anne Armstrong, a wealthy Texan whose Republican ties go back to the Nixon White House. (Karl Rove now occupies Armstrong's old office in the West Wing.) During her entire eight-year stint as chairwoman of the PFIAB, Amstrong also served on Halliburton's board. In fact, Armstrong was on Halliburton's board in 1995, when the company decided to hire Dick Cheney as its CEO. Asked about it later, Armstrong said there was "instant backing" for Cheney when his name was first mentioned for the job.

Hunt can use what he learns at PFIAB to help Halliburton. Or he can help his own company, Hunt Oil, one of the world's largest privately owned energy companies. "Even without taking advantage of any particular intelligence report, the PFIAB affiliation is gold," says Steven Aftergood, who heads the Project on Government Secrecy at the Federation of American Scientists. "It lends itself to exploitation for commercial and other interests."

Among Hunt's biggest projects is the controversial $2.6 billion Camisea liquefied natural gas project in Peru, which will soon begin delivering gas to markets on the West Coast of the U.S. Amazon Watch, a nonprofit environmental group, calls the project the "most damaging project in the Amazon Basin." It points out that the majority of the gas extraction will be done in a reserve that was set aside for local indigenous people. Similarly, Environmental Defense points out that Camisea will affect some of "the most pristine forest regions of the Amazon." In 2003, the Export-Import Bank, which was under heavy pressure from environmental groups, refused to provide financing for Camisea.

Does Hunt's position on PFIAB give him an edge in dealing with Peru and Camisea? There's no way to be certain. But it is clear that Hunt's business operations are so varied that every bit of foreign intelligence he sees at PFIAB might be of value to him.

Hunt's company is also active in Argentina, Chile and Guyana. One of Hunt Oil's most important projects is in Yemen, where his company has been producing oil for more than two decades. Hunt Oil's next Yemen project is a multibillion-dollar liquefied natural gas project on the Arabian Sea. The gas will come from Hunt's wells in the the vast desert that separates Saudi Arabia and Yemen. A 199-mile pipeline will carry it to a port on the Yemeni coast. That port is about 200 miles east of Aden, where al-Qaida suicide bombers hit the USS Cole in 2000. Of course, Hunt doesn't have to rely on just the PFIAB for intelligence. His former right-hand man, James Oberwetter, is now the U.S. ambassador to Saudi Arabia.

An employee of Hunt Oil told Salon that Hunt and his public affairs representative, former ambassador Jeanne Phillips, were traveling and that a return phone call should not be expected anytime soon.

Bush also reappointed DeWitt to the PFIAB. DeWitt has raised more than $300,000 for Bush's presidential campaigns. In addition to backing Bush's failed ventures in the oil patch, DeWitt played a key role in the syndicate that Bush put together to buy the Texas Rangers in 1989. It was DeWitt who told Bush that the baseball team was for sale. DeWitt then became an investor in the syndicate that paid $89 million for the team. (In June of 1998, Dallas billionaire Tom Hicks bought the Rangers for $250 million. The sale gave Bush nearly $15 million, a 24-fold return on his investment. Nine months later, Bush announced that he was running for president.)

DeWitt did not return a phone call to his office.

A new appointee to PFIAB is one of Bush's oldest and best friends, former Commerce Secretary Donald Evans. Less than three months after leaving commerce, Evans found a new job as CEO of the Financial Services Forum, which represents 20 of the biggest financial institutions doing business in the U.S. The roster of companies includes GE, Merrill Lynch, Citigroup, Deutsche Bank, AIG and Morgan Stanley. According to its Web site, the forum is designed to "promote policies that enhance savings and investment in the United States, and that ensure an open, competitive and sound financial services marketplace."

For Aftergood, from the Project on Government Secrecy, the latest PFIAB appointments represent a missed opportunity to help resolve the disastrous condition of America's intelligence agencies. He says the decision to appoint Hunt, DeWitt and Evans is part of the "familiar pattern that we've seen so often with this administration: The president's pals and supporters are esteemed more highly than those who have genuine competence." He continues: "These people aren't the best and the brightest. They are the best connected. And the quality of our government suffers as a result."