Joaquin Phoenix and Reese Witherspoon let it burn, burn, burn -- and do their own singing! -- in this inspiring Johnny Cash biopic. 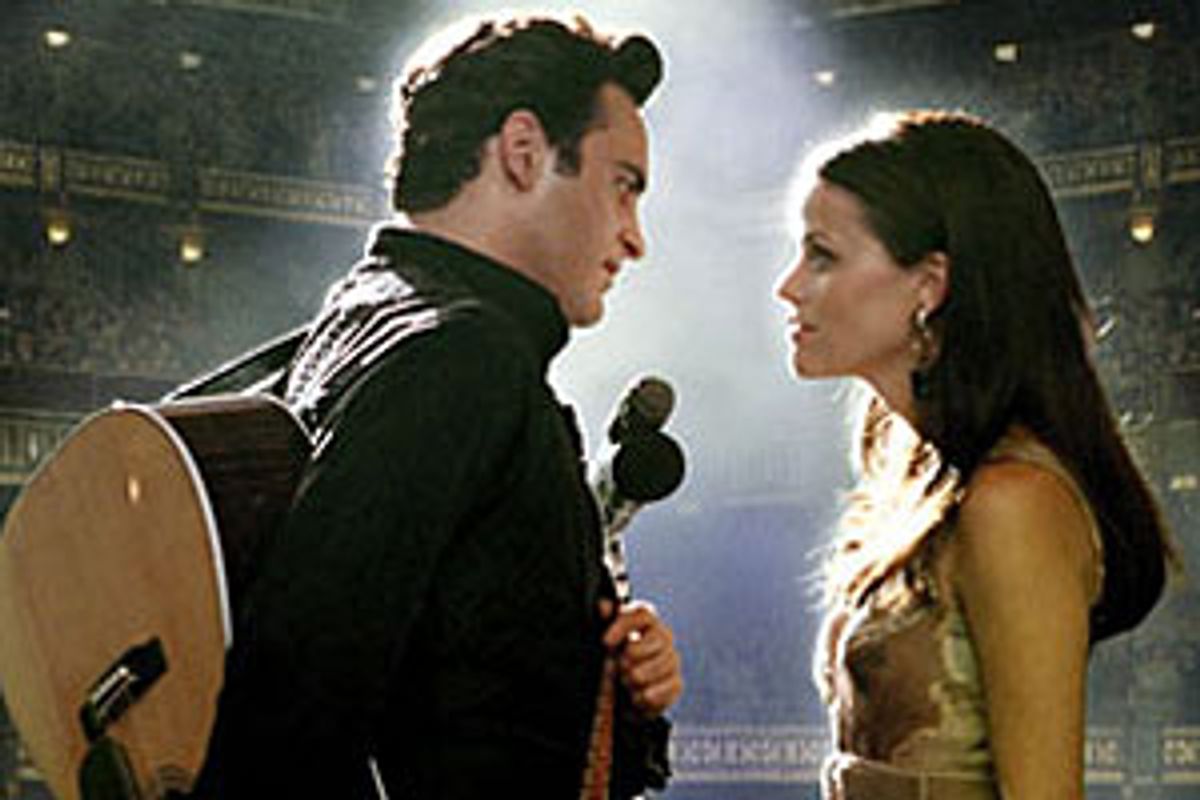 There's no way to make a true biopic of a figure as extraordinary and as complex as Johnny Cash: No picture is big enough to hold him. The best you can do is to make a movie about an idea of Johnny Cash, to select a few angles of the man and amplify them into a suitably mighty sound. That's what James Mangold has done in his deeply passionate "Walk the Line," which examines the legend of Cash through the lens of his slow-burning, long-lasting relationship with June Carter, whom he married in the late '60s after having known her -- and performed with her -- for more than 10 years.

Writer-director Mangold, his co-screenwriter Gill Dennis, and his two lead actors, Joaquin Phoenix and Reese Witherspoon, have captured the sturdy practicality of that love affair: This isn't so much a love story as that of a man grabbing at the last thing he believes he has to live for. Is that last thing the love of God or the love of a woman? Or, as "Walk the Line" suggests, is it both, the two so chronically intertwined that not even Cash himself could tell them apart? If "Walk the Line" isn't the full story of Johnny Cash, it's at least a crucial corner of it, a way of coaxing a legend down to a human scale, without shrinking that legend away to nothingness.

Mangold opens "Walk the Line" in 1968, with a tracking shot of the grounds of Folsom Prison. But the sound we hear is far more significant than the visuals are: It's the thrum of a bass line coming from someplace behind concrete walls, muffled but determined -- a sound that heralds the impending arrival of some Swiftian giant. We don't see the crowd of prisoners waiting for Johnny Cash, but we do see the man himself, frozen for a few moments, or many, before going onstage, even though his band has already started riffing impatiently as they wait for him. Cash -- or rather, Phoenix as a dream version of Cash -- is using the prison workshop as his green room, and we see him casually testing the sharpness of a circular saw with his thumb. A few scenes later, we learn that he lost his beloved older brother, Jack, to an accident caused by a saw like that. It's an obvious dramatic segue until you consider the subtext of the images. In this movie, Cash's personal demons show up not as abstract nightmares but in the cold shape of metal, a mirror of the concrete images that figure so prominently in his songs: chugging trains with their whistles blowing, the rhythmic slap of a shoeshine boy's cloth, and, in a song written by the woman who would one day become his wife, the ring of fire that's shorthand for the crazy perilousness of love.

From that beginning, "Walk the Line" wends back through Cash's Arkansas childhood and then fast-forwards to his stint in the Air Force and his marriage to Vivian Liberto (played with sympathetic desperation by the always-wonderful Ginnifer Goodwin). From there, the picture hopscotches across the high and low points of the first 15 years of Cash's career, from his first Sun recording with Sam Phillips, to the day in 1968 when he finally persuaded June Carter, his longtime friend and touring partner, to marry him: He proposed to her onstage, which is where the two of them had done much, though not all, of their living.

And that right there is the key to "Walk the Line": The movie addresses, as it needs to, how close Cash came to self-destruction via booze and pills, how he messed up his first marriage, how deeply he was attracted to June from the day he met her (according to the lore, they were playing on the same bill and she got her dress tangled in his guitar strings), although she wouldn't agree to become his wife until many years later, and not until he'd cleaned up his act. But Mangold and his performers understand that life is what songs are made of: The picture captures the joy Carter and Cash took in performing, separately but especially together, and if "Walk the Line" is "only" a love story, it's one that doesn't deny the power of the connections that people can forge through music. What's more, Cash's career began around the same time Elvis' did, but he outlasted Elvis by nearly 30 years. Carter couldn't fix Cash's problems for him -- he had to do the work himself -- but as Cash himself attested, she wasn't one to suffer foolish, destructive behavior. Would he have survived that long if there'd been no tough, sensible June Carter waiting for him to fly right?

Maybe the only way to play Cash adequately is to be, on the surface, all wrong for the part. Phoenix, with his narrow shoulders and lithe build, is the wrong body type to play Cash -- even the young Cash. And he bravely sings Cash's songs himself, in a voice that gamely struts the territory and yet has one crucial, unforgivable drawback: It just isn't Cash's.

But this is a remarkable performance, not because Phoenix pulls off, or even attempts, an approximation of Cash but because he manages to embody the spirit of Cash. Watching Phoenix's Cash perform onstage -- strung-out, his pupils like pin dots -- is both horrifying and exhilarating: Phoenix forces us to confront the notion that unhealthy, unbalanced people can sometimes make incredible art. But in other moments -- for instance, when he speaks to June in his soft, nervous drawl -- he shows us a Cash that we've never seen before, possibly a Cash that didn't really exist. But that's not the point. Phoenix seems to be channeling a private tenderness in Cash that, unless we knew him personally, we couldn't possibly have seen. And yet, listening to songs like "Give My Love to Rose" or "I Walk the Line," we have no doubt that tenderness was real. Phoenix puts it into a concrete, believable framework.

With her teased hair and pleasant whipped-butter voice (like Phoenix, she does her own singing in the role), Witherspoon's Carter meets Phoenix's Cash in an impressionistic middle ground that seems to bear some resemblance to reality, without feeling like a desperate attempt to re-create it. Her performance works beautifully. Witherspoon has taken far too many roles that allow her to coast on her tart cuteness; this is the first one she's had in years that seems to have genuinely challenged her. What makes her June Carter so moving is the way she holds herself apart from Cash rather than letting herself fall for him: She stands up to his nonsense on tiptoe, and in a crinoline -- there's never a minute when we're not aware of how grounded she is.

As off-kilter and intriguing as these two performances are, "Walk the Line" is still a basic, meat-and-twos biopic, along the lines of "Sweet Dreams" and "Coal Miner's Daughter," and I suspect many Cash fans (as well as that small percentage of the population that's bafflingly indifferent to him) will think it's too conventional. But I think its conventionality is part of its power. Late in the movie, Mangold shows us how Cash, after kicking his drug habit, reconnected with Christianity: We see him going to church with June. She tells him, in a line so unvarnished and raw it avoids dull churchiness, "God has given you a second chance."

And almost immediately, Mangold cuts to a scene in which Cash pores over his many fan letters and notices that a large number of them are from incarcerated criminals who love, and relate to, his music. He realizes these are the people he wants to serve. When he approaches a record executive with the idea he's come up with -- making a live recording at Folsom Prison -- the exec tries to talk him out of it: "Your fans are church folk, John -- Christians. They don't want to hear you singing to a bunch of prisoners to cheer them up."

But Cash's brand of Christianity, the polar opposite of religious conservatism, was based on the necessity of embracing even those the Lord seems to have forgotten. And "Walk the Line" is an accomplishment for the way it captures that angle of Cash's life alone. This is a democratic and accessible picture. Just as Cash did, it sings for everyone.