The banality of evil

The latest from Ruth Rendell -- perhaps the best mystery writer alive today -- offers up an irresistible, unglamorous view of crime. 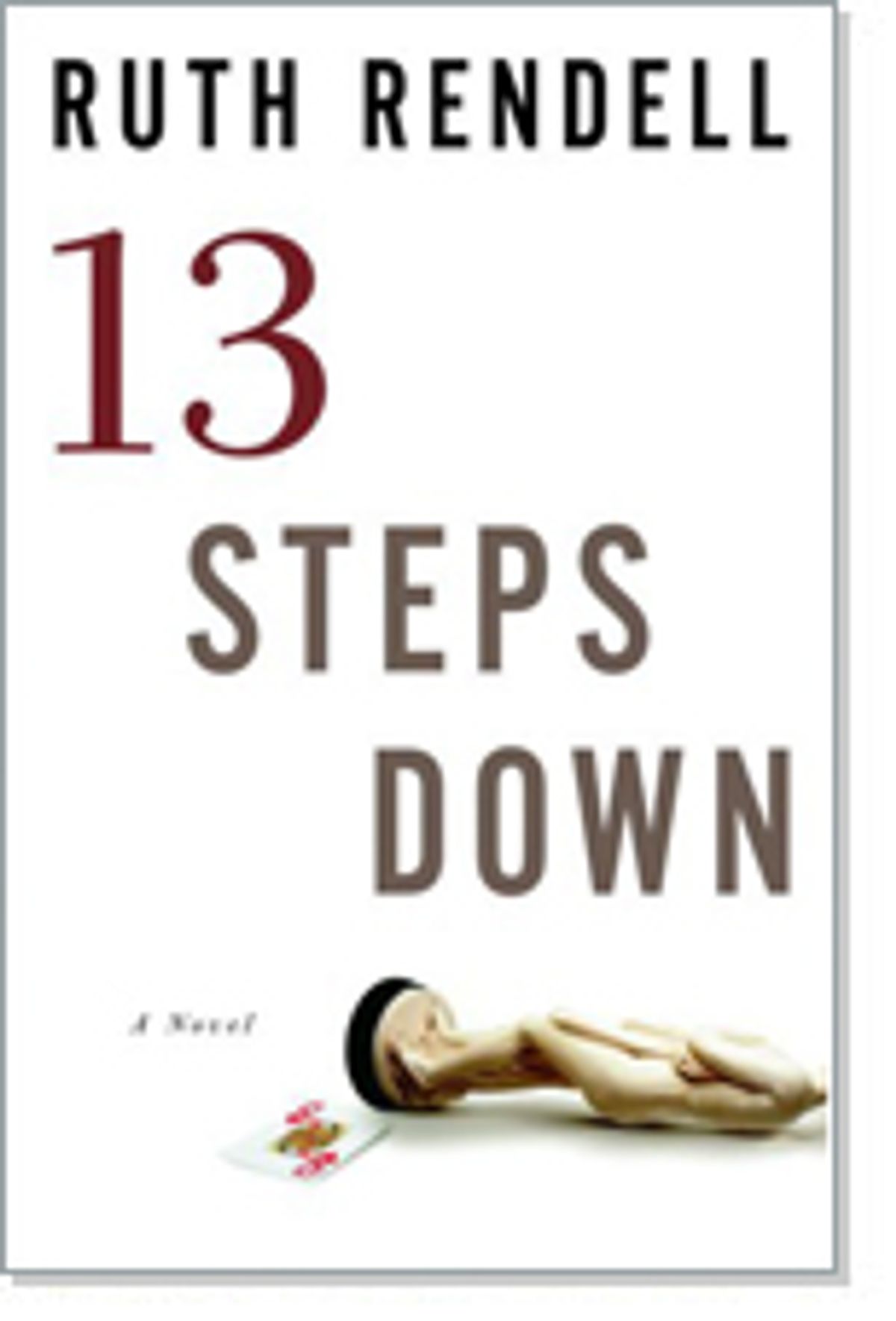 Ruth Rendell knows how to sink her hooks in. A third of the way through her new book, "Thirteen Steps Down," the mood is resolutely bleak. This is like a Martin Amis novel without the distracting verbal pyrotechnics, a full-bore, unflinching contemplation of human pettiness, stupidity and self-delusion, written in elegant, unshowy prose. Abandoning the book, however, is not an option. Watching the ingenious clockwork of Rendell's plot tick its way to the story's inevitable -- yet somehow unpredictable -- conclusion turns out to be addictive.

Rendell is widely considered the best living mystery writer, and her publisher has been strenuously promoting "Thirteen Steps Down" as a potential crossover hit in the U.S. (In her native Britain, she's already quite famous.) To someone like me, a reader with only a passing interest in the genre, the introduction of a real-life serial killer in the first few pages was at first discouraging: Serial killers have become such a cheap and easy device for TV series and airport paperbacks. (If the killers themselves no longer give you the creeps, try thinking about all those respectable-looking business travelers gorging themselves on elaborate descriptions of fantastically sadistic murders.)

Fortunately, John Reginald Christie, a necrophiliac who murdered several women in London during the '40s and '50s, has been dead for half a century by the time the action commences in "Thirteen Steps Down." Mix Cellini, a home exercise equipment repairman, collects books on the killer and even goes so far as to rent rooms in a big, ramshackle house on the same Notting Hill street where Christie committed his crimes. Mix, still good-looking enough to render extra services to his rich housewife clients, is gradually going to pot on a diet of junk food and booze. The gossip tabloids he reads have a similar effect on his mind. He obsesses over and eventually begins stalking a fashion model named Nerissa Nash.

Superficially, Mix has nothing in common with his elderly landlady, Gwendolyn Chawcer, a reclusive bookworm so behind the times she can't imagine what microwaves are meant to do. But the two of them do share a habit of daydreaming and a certain mulish, blinkered self-absorption -- a trait that will be the undoing of them both. Gwendolyn's solipsism balances Mix's; this is Rendell's cautionary wag of the finger at anyone who thinks that immersion in great literature automatically makes for a great mind. Gwendolyn may have read all of Proust and Henry James more than once, but their riches furnish a cramped and windowless soul.

The point of view hops from one character to another, but the overall effect is of a cool, ironic omniscience, as if the novel were being narrated by a minor god. From this enjoyable perspective, we watch as foolishness and fate conspire to overthrow the plans of men. Not that any of those plans could be characterized as "best-laid"; in Mix's case, even his delusions have delusions. Convinced that Nerissa will go out with him if he only gets the opportunity to ask her, he frets briefly about the expense of taking her "somewhere fabulous." No worries, though: "once he'd been seen out with her -- or, say, three times -- he'd be made, the TV offers would start rolling in, the requests for interviews, the invitations to premieres." (Actually, Mix's admiration of Christie is the only false note in Rendell's mordant characterization; he's just too conventional for the creepy outsider world of serial killer fandom.)

Gwendolyn, for her part, harbors an ancient crush on the doctor who treated her dying mother back in '50s, the only young man she ever spent time alone with. He once said he was "awfully fond" of her, and from this impassioned confession and a hazy notion of romance derived from Victorian novels, she has concocted a great and thwarted love, "the most important event in her life." The chance discovery of a newspaper obituary for his wife prompts her to write to him.

In Rendell's view, we seldom understand how life works and how little control we have over it; criminals are the biggest dolts of all for risking so much on schemes that are bound to go awry. What's more, murderers also lack sympathetic imagination (as opposed to the narcissistic imagination of fantasy). The characters who fare best in "Thirteen Steps Down" pay real attention to other people, instead of treating them like props. It's this unglamorized view of crime -- very different from pop culture's own dreams of evil homicidal manipulators -- that makes Rendell's fiction irresistible.