Advances in 3-D printing and embedded electronics will revolutionize how everything from coffee makers to cellphones gets made. 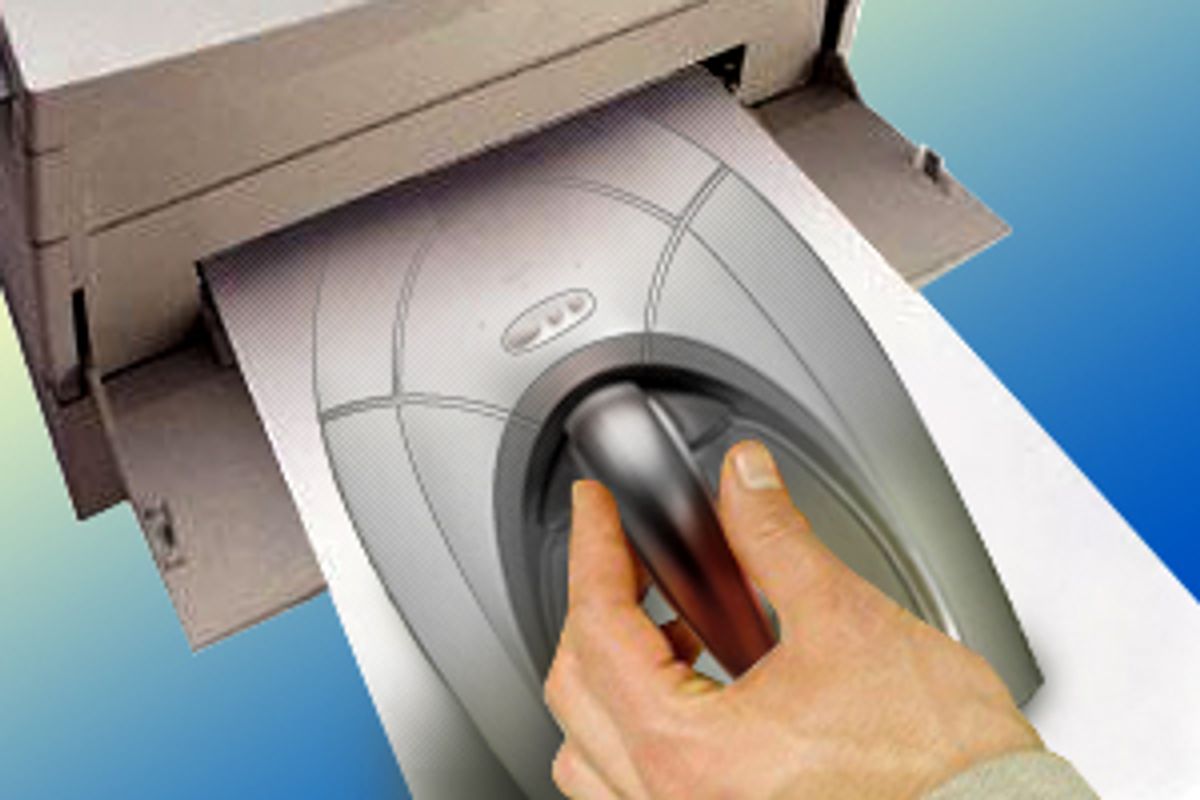 Imagine that your coffee maker breaks just before you're about to host a brunch. You go online and click on the model you want to buy. But you don't have to wait for it to be shipped; instead, a machine on your desk kicks into operation. Inside a glass chamber, a nozzle spits out the electronics, chassis, motor and other components, layer by layer. An hour later, you snap together a few parts and the brewing begins.

That machine would be the "Star Trek" replicator realized. Well, a beta version anyway. Already, several engineering threads are converging that may pull the replicator out of the far future and put it in our homes, or at least at Kinko's, in the next few decades. MIT's Neil Gershenfeld, director of the Center for Bits and Atoms, dubs the vision "personal fabrication." John Canny, a professor at UC-Berkeley's College of Engineering, where I'm a writer in residence, refers to the research field as "flexonics." Whatever the buzzword, it's not unlike desktop publishing, but for products instead of paper. Call it desktop manufacturing.

It starts with the physical object itself, the plastic chassis for the remote control that you stepped on, the body of the coffee maker. Product designers have literally been printing out objects for more than a decade. A digital design is loaded into a machine that drips out thin beads of plastic and glue, building up hair-thin layers until the whole form is complete. These kinds of three-dimensional printers are perhaps the coolest tool in the realm of rapid prototyping, technology that allows designers to quickly mock up models of new products. A designer can feel how the next-generation phone she's working on will fit in a shirt pocket.

While these 3-D printers are improving in quality and dropping in price, the devices they produce still have one problem: They don't actually work. That's where printable electronics come into play. Researchers at many corporate and university laboratories are brewing inks of semiconducting nanocrystals and using cannibalized inkjet printers to pattern the nanomaterials into circuits on plastic, paper and even cloth. Printable electronics is likely to hit the mainstream first in flexible displays that can be cranked out in rolls and then as UPC bar-code-killing RFID (radio frequency identification) tags stamped right on a product package.

While printable electronics are still far from delivering the reliability and performance of traditional circuitry, the printable-electronics technology could eventually be incorporated into a 3-D printer. For example, the printer would embed layers of electronics within the housing of the device it printed. Of course, that might mean that a hairline crack in your cellphone would be fatal.

The next step is to print mechanical structures -- motors and actuators, devices for controlling or moving something. At MIT, Joseph Jacobson and his students have printed microscopic linear drive motors, similar to pistons, and thermal actuators that are triggered by heat. These kinds of pinhead-size devices, called MEMS (micro-electromechanical systems), are found in everything from automobile air bags to dishwashers. To make larger mechanisms, such as the components that cause a blender's blades to spin when it's switched on, Canny and his Berkeley colleagues propose filling inkjet cartridges with electroactive polymers, essentially plastic that contracts when zapped with electricity. The same material generates a voltage when flexed, making it an ideal choice for buttons or switches in a printed object.

These kinds of polymers could potentially be loaded into University of Bath engineer Adrian Bowyer's RepRap (replicating rapid prototyper). The RepRap project has just begun, but Bowyer's aim is to build a "universal constructor" that not only can manufacture objects but can actually make copies of itself. Over the next four years of development, he plans to release the blueprints and software code for free online to accelerate progress.

Desktop manufacturing is still in its infancy. But as the baby steps get bigger, the potential impact of this technology on everything from product development to retailing becomes clearer. Canny says that in many cases, consumers might pay for plans instead of a product. Raw materials -- alloy, polymer and nanoparticle inks -- will be staples on a person's grocery list. While companies now play down how crappily their products are made, those who embrace personal fabrication won't even have to worry about it anymore. Perhaps they'll be more willing to pay big bucks for good design if they can leave the manufacturing to us. Still, I look forward to a generation of do-it-yourself industrial designers and tinkerers who improve and customize these commercial product plans. Their work could be swapped online like so many MP3s.

David Pescovitz is an affiliate researcher at the Institute For The Future and the co-editor of BoingBoing.net. He is also the special projects editor for MAKE and the writer-in-residence for UC Berkeley's College of Engineering and the Berkeley Sciences.