At the legendary comic strip's centennial, Winsor McCay's "Little Nemo in Slumberland" gets the treatment it deserves in a huge, lush new collection. 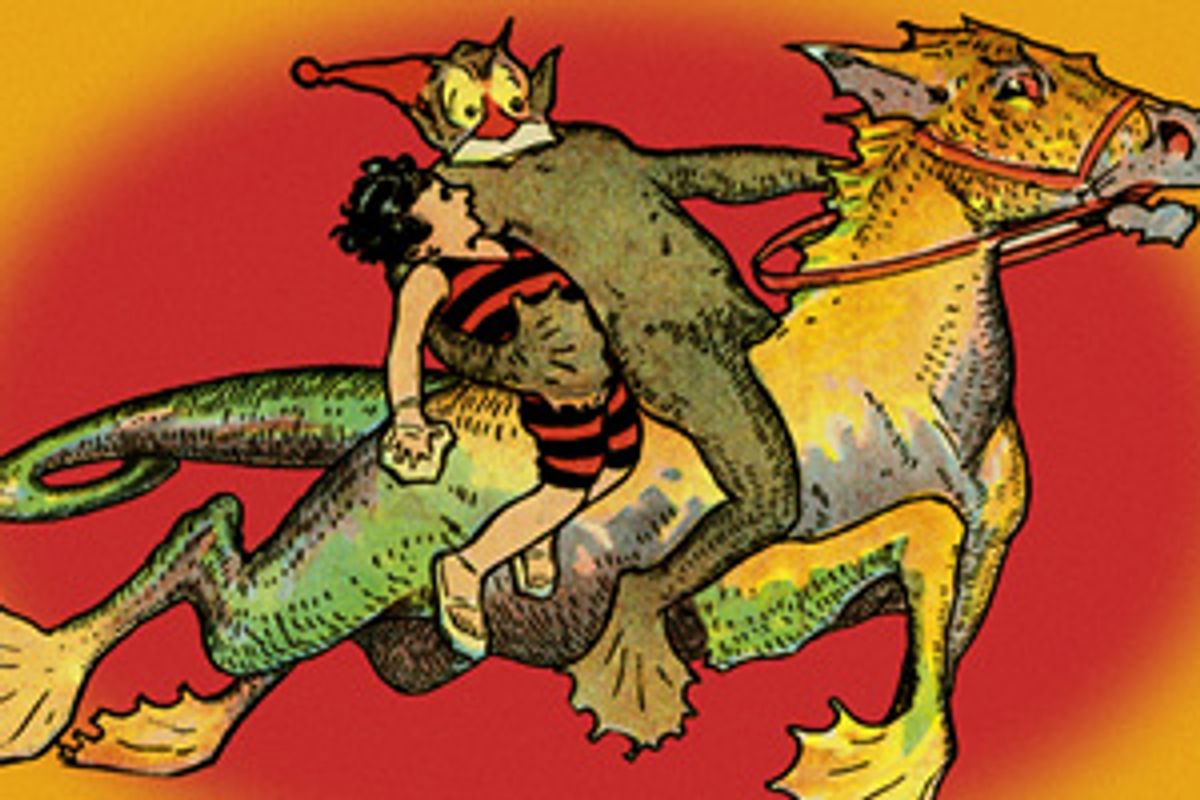 Very few people who are still alive have seen Winsor McCay's work the way it was meant to be seen. That's a shame -- he was one of America's first major comic-strip artists, and a century after his peak, his work is still startling. History-minded cartoonists from Art Spiegelman to Vittorio Giardino have composed dozens of homages to McCay; he's easy to pastiche or parody, because his best strips follow the same formula in every episode. Someone falls asleep and has a turbulent, fantastical dream, full of strange exclamations, then wakes up in the last panel, complaining about having eaten something before going to sleep. In "Dream of the Rarebit Fiend," which ran for almost 10 years in the early part of the 20th century, the food in question was specifically Welsh rarebit. (Alan Moore zinged McCay with a sleep-talker's monologue in his 1986 story "Pictopia": "Melted cheese! Melted cheese! Oh, mama, do take care, my sheets will tangle for sure!") As for McCay's work itself, it's been reprinted here and there, although virtually all of it is out of print, except for the odd page or two that inevitably shows up in history-of-comics retrospectives.

But he didn't draw his comic strips to be treated as museum pieces; he drew them to make newspaper readers' eyes bug out of their heads. "Little Nemo in Slumberland" was the peak of McCay's art, and "Little Nemo in Slumberland: So Many Splendid Sundays!," edited by Peter Maresca, is the first book to do justice to it, basically because it is freaking gigantic. It's a luxury item -- 120 bucks -- but it delivers: at 16 by 21 inches, it's a coffee-table book bigger than some coffee tables. In other words, it's the size of the New York Herald's tabloid pages, on which "Little Nemo" was originally printed, and its gorgeous color reproduction is designed to look like the pages as they were published, on paper far nicer than newsprint but with the same background tone.

I've seen scattered reprints of "Little Nemo" for about 20 years, but I opened this book and thought, "Now I get it." A single panel of these beauties is the size of at least a few entire modern comic strips, and if there's one thing McCay specialized in, it's scale. Nemo, a 5- or 6-year-old, is small in his own world, and in his dreams, people and animals and buildings tower even higher. (McCay also loved reversals of perspective, and every so often, Nemo's dreams would find him growing to enormous size, dwarfing everything else.) In one stunning strip, a costumed elephant descends a set of palace steps toward Nemo and a friend; it's drawn in five tall, vertical panels, and as the elephant approaches, it takes up more and more space, until in the penultimate image, as it raises its trunk, the panel is only the width of the distance between its eyes. The last panel, as always, is an inset square of Nemo's bed, where his mother is rousing him.

McCay drew "Little Nemo" on and off for two decades, beginning in 1905; it spawned a Broadway show and two movies (animated by McCay himself), but the general consensus is that the early strips were the better ones. (Amazingly enough, he was drawing at least two other weekly strips at the same time, as well as some of the first major animated cartoons.) "So Many Splendid Sundays!" follows the pattern of a greatest-hits album: most of the brilliant first year, a fantastic long sequence from late 1907 and early 1908, a handful of good ones from the next couple of years, and finally a sort-of-half-baked strip from 1911.

It actually took McCay a little while to hit his stride on "Little Nemo" -- and by "a little while" I mean one week. The first strip, published Oct. 15, 1905, is uncertain and hastily rendered: King Morpheus of Slumberland sends his footman with a magic pony to fetch Nemo, but the little boy gets distracted into a race with a green kangaroo, falls off the pony, yells for his parents and wakes up. With the second episode, everything clicks, as we get the series' early raison d'être: the king wants Nemo to come and be the princess's playmate. Nemo's bed sinks into the floor, and the staggered panel layout continues its sense of downward motion; he walks through a forest of gigantic mushrooms, but when he accidentally stumbles against one of them, they fall to pieces and collapse on top of him. (And he wakes up.) From the filigree on Nemo's bed to the speckled tops of the mushrooms, it's an exquisite piece of drawing. McCay had figured out how to capture the peculiar vividness of children's dreams.

For the next seven months, Nemo keeps moving very slowly toward the princess, with occasional interruptions. (Dreams don't tend to involve much forward progress.) In a Thanksgiving-week strip, he dreams that his house has been picked up in the beak of a gigantic turkey, which drops him into a lake of cranberry sauce with a celery-stalk forest on its shores. In March 1906, he makes it through the gates of Slumberland at last, and encounters his rival, "a bad and brazen brat named Flip, an outcast relative of the Dawn Family, archenemies to Slumberland and its people who feared to eject him because of the power the Dawn Family to turn night into day by the aid of the sun a willing ally and an awful disturber in the ceremonies held in this beautiful place." [Sic -- shortly thereafter, McCay apparently realized that prose was not his strong point, and exiled captions from "Little Nemo."]

Flip is the willful id to Nemo's hapless ego, a wild-haired kid with a half-green face, gaudy clothes, an enormous cigar and a huge yellow top hat that reads "WAKE UP"; his goal is to reach the princess and, uh, become her playmate before Nemo does. About that cigar, by the way: Sigmund Freud's "The Interpretation of Dreams" was not translated into English until 1913, and there's almost never a sense that Nemo's dreams symbolize anything in particular.

After Nemo and the princess are finally united in July 1906 -- just as the dawn breaks, and fades McCay's black lines to blue -- "Little Nemo" subordinates its storytelling to its design for a few months. It becomes a World's Fair sort of affair, with the couple encountering immense animals and thrill rides. Then "So Many Splendid Sundays!" jumps ahead a year, by which point the princess has disappeared. Nemo and Flip have become two-thirds of an exploring team with the Jungle Imp, a caricature left over from an earlier McCay series who's rather hard to bear. (He's prone to dialogue like "ih ip ig ung gig gumple.")

By this point, McCay's obviously coming up with impressive-looking things to draw and constructing Nemo's dreams around them. He was particularly fond of architecture; one monthlong sequence finds the trio somehow transformed into giants, romping around a painstakingly detailed if not exactly accurate landscape of Lower Manhattan buildings, and destroying most of them in the process. Seeing these pages at tabloid size, once again, they make more sense than they have in a century: The buildings are drawn at the scale a child would see them, looking out the window of a Herald subscriber's Manhattan high-rise apartment.

A few months later, Nemo, Flip and Imp start exploring the inside of an enormous palace, Befuddle Hall, in a segment that goes on for months. An architectural walk-through wouldn't normally be the stuff of grand entertainment, but McCay is drawing with astounding vigor and glee. There's a stairway that seems to rise to the moon and another that descends unimaginably deep, a hall of mirrors that reflects the trio into an infinite, kaleidoscopic legion and another that distorts them into fun-house smears as tall as the page. Finally, there are grand ballrooms drawn upside down and sideways; Nemo and his friends, wearing policemen's uniforms (because why not?), scurry for footholds on the moldings.

Curiously, in the later strips reprinted in "So Many Splendid Sundays!," "Nemo's" plot starts to overtake its design again, and sometimes to overwhelm it. In the spring of 1910, Nemo and friends -- drawn more quickly and with less detail than before -- hop aboard an airship and head off to Mars, where a businessman named B. Gosh has a monopoly on all the essentials, including air and words. There are still plenty of lovely Art Nouveau-inspired images, like a field of immense roses bounded by Greek columns and stretching off to the horizon, but the "airship" sequence doesn't often have the early strips' bracing sense of spectacle, and -- more important -- by 1910, "Nemo" no longer seems like the stuff of actual dreams.

That was the joy of "Little Nemo" at its best, the thing that set it apart from McCay's other strips like "Little Sammy Sneeze" and "A Pilgrim's Progress," and even "Dream of the Rarebit Fiend": It didn't just evoke its readers' dreams, it seeped into them. Nemo is too small to act, really, and he doesn't understand the real world yet, let alone the subconscious world in which his desires and fears are made strangely real, and which he leaves by falling or drowning or being shaken into wakefulness by unfamiliar voices that become familiar as he opens his eyes. But McCay also realized that the dream world is a richly aestheticized one -- streamlined in its motives, stripped down to the things the conscious mind cares about most, and amplified into impossibility. Like very few other artists, he managed to turn that aesthetic into something that doesn't fade when Flip calls the Dawn Family to turn night into day.

Douglas Wolk's graphic novels column appears at the beginning of each month in Salon books.