America's favorite cross-dressing, gunslinging frontier woman was less (and more) than her legend would have you think. 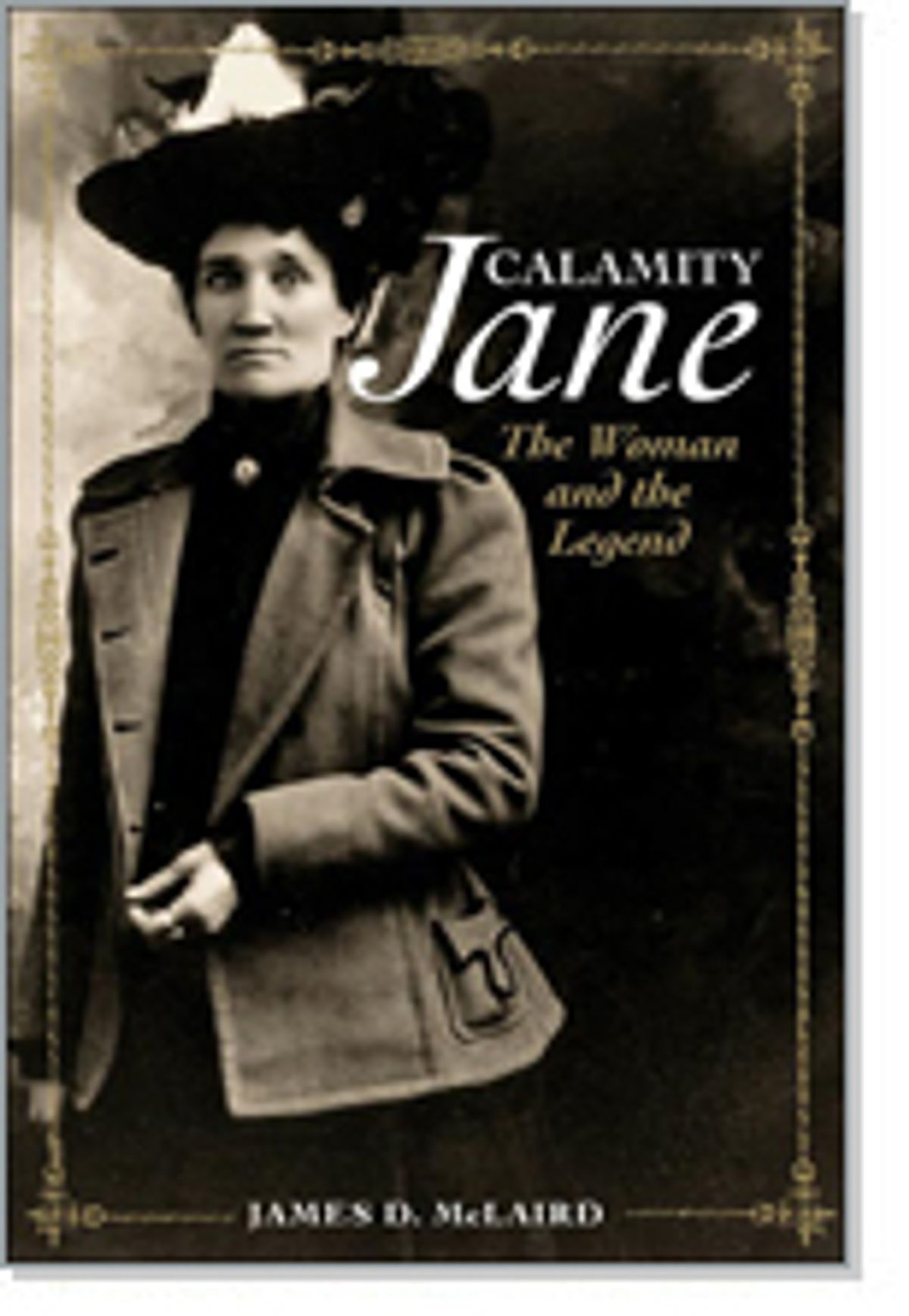 As author James D. McLaird confesses in his conclusion to "Calamity Jane: The Woman and the Legend," historians sure know how to ruin a good story. In this case, somebody had to do it. Calamity Jane -- 19th century gunslinger, drinker and cross-dresser -- was so barnacled over with myth that it had become impossible to see the lady for the lore. From dime-store novels of the 1870s and '80s chronicling her frontier fearlessness, to Doris Day's G-rated Jane in the 1953 musical "Calamity Jane," to Jane Alexander's feminist reanimation of her in a 1984 ABC special, to Robin Weigert's blowsy portrayal of her on the HBO series "Deadwood," Calamity Jane has served as a Rorschach blot for devotees of unconventional women for over a century. Then again there was Larry McMurtry's "Buffalo Girls" -- published in 1990 -- which trashed the myth altogether, casting her as a drunk, a liar and a hermaphrodite.

Love her or hate her, you probably don't know her at all. Nee Martha Canary, she was less -- and more -- than she's cracked up to be: She was a cook and a laundress, a dance hall girl and a prostitute, an abject alcoholic and a devoted nurse, an abused wife and a mother who said of her daughter, Jessie, "She's all I've got to live fer; she's my only comfort." She knew Wild Bill Hickok, who was newly married, for a mere six weeks before he was shot down in Deadwood, S.D. Legend has it -- wrongly -- that they were lovers. And let the record show: Though she sometimes donned men's clothes, Canary typically wore a dress.

In "Calamity Jane: The Woman and the Legend," McLaird, a professor emeritus at Dakota Wesleyan University, sets out to correct the errors that plague Canary scholarship and, more significantly, to explain how her life was recast to fulfill a romantic vision of frontier life. Some of the tall tales about her spring from dime novels in which she was written into fabricated exploits; others were plucked from her own falsified autobiography ("I was considered the most reckless and daring rider and one of the best shots in the western country"). But weirdly enough, a major source of misinformation about her came from her impostor daughter, Jean McCormick, who popped up in 1941 with a forged memoir, itself spun from popular fictions, that crystallized Canary's myth and went unquestioned for decades. McCormick claimed her parents were Calamity Jane and Wild Bill Hickok, and because so little research had been done on Canary, the forgery, which McLaird debunks in a few deft and convincing strokes, was long accepted as fact.

McLaird all but apologizes for writing a book whose somewhat piecemeal narrative (chunks of Canary's story are lost to history) is further fractured by the rebuttals necessary to defending its accuracy. No family records survive, and her 1896 autobiography was propaganda. "Sadly," McLaird notes in his introduction, "after romantic adventures are removed, her story is mostly an account of uneventful daily life interrupted by drinking binges." But the myth-making (much of which Canary orchestrated herself through newspaper interviews) is as interesting as the myth, and through the host of colorful quotes McLaird has unearthed both by and about her, Canary emerges as a character worth mythologizing. (If only McLaird weren't so resistant to paraphrasing: In some passages, the book reads like a Zagat's restaurant guide, with multiple partial quotes crammed into one chop suey sentence after another.)

Born in Mercer County, Mo., in 1856, Canary was the oldest of some unknown number of siblings. Her father was a farmer; her mother was, by one account, an illiterate prostitute whose husband, taken by her beauty, tried to reform her, and failed. After some legal wrangling over land, the family sold their property and left Missouri in the early 1860s, heading for Montana gold. But they fell on hard times; her mother died in a mining camp in Blackfoot City, Mont., when Canary was about 9. After taking the children to Salt Lake City, her father died soon after.

Canary was presumably taken in by an adoptive family, but by the time she was 14 or 15, she was on her own, working at a boarding house in Piedmont, Wyo., and dancing with soldiers at night, until the owner kicked her out for appearing at a party in a soldier's uniform at a time when women could be fined for wearing men's clothes. She followed freighting teams along the railroad, worked as a laundress, dance hall girl and prostitute or "camp follower," though she later claimed she spent her teens engaged in military campaigns against Indians in Wyoming. She was one of the first white women to enter the Black Hills of South Dakota -- but not as a soldier. One wagon train captain heading there from Cheyenne recalled seeing her, then 20, driving a team and wearing a buckskin suit. "The first place that attracted her attention," he said, "was a saloon, where she was soon made blind as a bat from looking through the bottom of a glass."

Canary's notoriety evolved into respectability in 1876 Deadwood, when she met Wild Bill Hickok, the legendary desperado who was both admired for his courage and despised, says McLaird, "for his showy dress, his itchy trigger-finger and his compulsive gambling." For all executive producer David Milch's claimsfor its veracity, HBO's "Deadwood" got Jane wrong: She wasn't an idle drunk in buckskins; rather, she was a dance hall girl in the early days of E.A. Swearingen's Gem saloon, which was, at the time, a lumber and canvas construction where three women and a man dressed as a woman entertained customers. A Deadwood bartender claimed Swearingen sent Canary to "white slave" for him in Sidney, Neb., and that she brought back 10 girls she'd lured with stories of the vast wealth in the region. By one account, she followed Hickok all over Deadwood and wailed when he was killed; by another, her crush was Hickok's partner, Charley Utter, a local dandy. Though she called Hickok her friend in her autobiography, she later told the press he was her "affianced husband."

The seeds of her legend planted, Canary became a dime-novel heroine, inspiring writers to work her into their stories of frontier bravery, even though her daily life involved a string of low-paying jobs and bouts of heavy drinking. She lived all over the Northwest, marrying at least three men (one of whom was jailed for attacking her) and working -- intermittently -- as an attraction in Wild West and dime museum shows. She bore a son who probably died in infancy (she called him "muzzie's yittle snoozey darling") and later Jessie, who, before she was given up for adoption at around age 10, was taunted at school because of Canary's reputation. Wherever she could, she sold photos of herself for extra cash.

As a public figure, Canary was the Courtney Love of her day: A talented pioneer in a man's world, she was a chronic substance abuser prone to outrageous behavior and forever linked in the public mind to a dead man whose fame overshadowed her own. The difference between them is found in Canary's private acts of kindness. In a 1924 book, two pioneers who wrote about the Black Hills gold rush attempted to debunk Canary's myth, claiming she was "nothing more than a common prostitute, drunken, disorderly and wholly devoid of any conception of morality." Still, they said, she deserved recognition as a Black Hills luminary because of her humanitarian gestures: When hundreds of Deadwood residents were struck by a smallpox scourge in 1878, for example, other women in the camp refused to help them for fear they would contract it, but Jane cared for them, day and night, over the course of weeks. She was also, said a man who knew her in Spokane, Wash., "the last person to hold the head of and administer consolation to the troubled gambler or erstwhile bad man who was about to depart into the new country."

The challenge McLaird faces in telling Canary's story is resolving -- or, at least, acknowledging -- its many contradictions: Some said she was beautiful, others called her repulsive, and the book's photos show her to be striking at best, homely at worst, with bottomlessly sad eyes in every shot. One reporter called her "an ignorant woman of mostly unwomanly habits"; another said she was "generous, forgiving, kind-hearted, sociable, and yet when aroused, has all the daring and courage of the lion or the devil himself." She got her nickname because of her calamitous past (as an orphan), or because she caused her lovers venereal calamity, or because she was always in trouble, or because she cried "What a calamity" when she lost at poker, or because of the way she nursed people during epidemics. (To becloud things further, there were several other western women named Calamity Jane, all prostitutes and alcoholics.)

McLaird has done vast and careful research, digging up juicy anecdotes and providing important correctives to the Calamity Jane myth. But he doesn't quite deliver on the promise he offers at the start of the book, which is to explain why, if she was not much different from other frontier women, her life was spun into legend. He doesn't even discuss "Deadwood," nominated last year for 11 Emmy awards (as much a marketing oversight as an editorial lapse), which features a Jane who seems to fascinate viewers (and polarize opinion) just as the real one did. Historically thoroughgoing as his book is, it tracks but doesn't fully illuminate the half-life Calamity Jane has enjoyed since Canary's death, at 47, from "inflammation of the bowels" (no doubt brought on by alcohol abuse), when her body, lying in state, had to be guarded against women who clipped locks of her hair to take as souvenirs.

Who knows why we still thrill to her badness? She was a maverick, outsize and free-spirited, seemingly self-reliant yet vulnerable, who gave men a run for their money through her cursing, drinking, riding and gunmanship (which may explain why McMurtry cut her down to size by making her half a woman). Like so many pop culture icons, she lived fast, died young and was quickly canonized, yet her fictional self so quickly preempted the real one that it's almost impossible to say her legend is anything but fiction. In the end, a cowboy who knew her in Spokane (where she was the "keystone around which all the excitement and life of the new town was reared") provided the most concise eulogy for Calamity Jane: "She was a good woman [,] only she drinked."

Margot Mifflin is an assistant professor in the English Dept. at Lehman College/City University of New York. She is writing a biography of Olive Oatman called "The Blue Tattoo: The True Story of a Victorian 'Savage'."