With her creepy, suspenseful stories of desperate people in tight situations, Rachel Ingalls could be the next Patricia Highsmith. 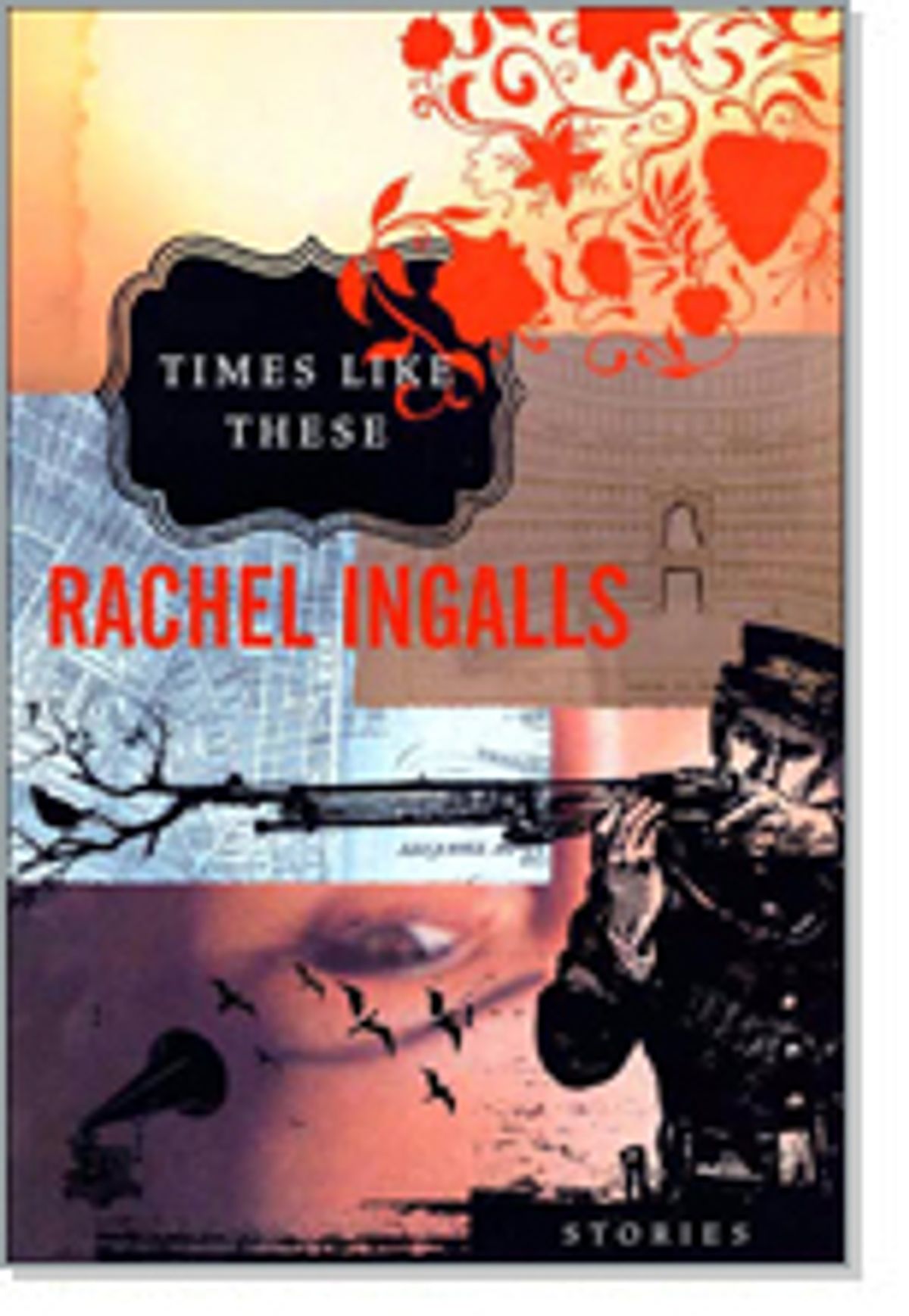 If Patricia Highsmith had had the chance -- and the inclination -- to rewrite "The Notebook," Nicholas Sparks' sentimental story of star-crossed young lovers, I think she would have come up with something much like the first story in Rachel Ingalls' haunting new collection, "Times Like These." Here's the Nicholas Sparks: As in his bestselling romance, Ingalls' "Last Act: The Madhouse" features two teenage lovers who find their parents standing between them. William and Jean break the rules, have sex and, inevitably, conceive a child. William wants to marry Jean and have a family. But his parents aren't so keen on the idea of their well-bred son "marrying down." When William's mother asks her son to take some time apart from Jean to think about what he really wants to do, he agrees, if only to get her off his back.

During William and Jean's separation, the two write each other letters and leave them in a secret place for retrieval. But it's not secret enough. William's mother intercepts the letters (as Allie's mother does in "The Notebook"). Even worse than withholding or destroying them, William's mother replaces their letters with new ones, in forged handwriting, so that both teenagers wind up so confused and betrayed they never speak to one another again.

Of course, "The Notebook" ends happily. "Last Act: The Madhouse" lives up to its title, and in its last act grows creepier and sadder. Here's where Highsmith takes over.

Years later, after his parents have died, William returns to his childhood home. After discovering the letters Jean intended for him, he "went out of his mind ... He slashed all the paintings in the house, even the ones he has known from his childhood and had loved most ... He tore up all the photographs of himself and his parents, set fire to the Anatolian rug, and walked out of the room while it was still smoldering. He took his father's bird guns  and began to shoot into the walls, sideboards, ceilings and stairs." Days later, he regains his composure, but never his wits, and sets out to look for Jean.

In the story's second half, on a tip from Jean's family and with the aid of a private investigator, William tours various mental institutions, looking for the girl he had loved all those years before.

Ingalls' stories are all grounded in human behavior and emotion. (In this collection, they're also riddled with typos, which is a real shame. A writer this good deserves a better editor.) In "Times Like These," there's nothing supernatural; the tension hinges instead on that moment where, if one decision had been made differently, or an invitation had not been extended, or a word had not been uttered, disaster might have been averted. Ingalls puts her characters in trying, even terrifying, situations so that we can watch them think and puzzle their way out.

Some become monsters, others withdraw. In the novella-length "The Veterans," an ill-mannered and possibly mentally disturbed vet named Sherman seeks out Franklin, the man who saved his life in the war, and becomes an unwelcome, potentially dangerous houseguest in Franklin's cozy home. In the story "Somewhere Else," a couple sets off on a much-needed European vacation, but they find themselves with a handful of others on an old-fashioned horse-drawn carriage ride that never ends. And in the final story, "No Love Lost," a family returns to its burned-out home after a terrible war. Shortages are so severe in their town that neighbors are killing each other for scraps of food or fabric. Refugees from other towns, also looking for sustenance, are simply tossed into the quarry, and little children can hear their screams rising up from below.

Also like Highsmith, Rachel Ingalls has spent her adult life in Europe, and is known better in her adoptive country (England) than in her native. I only hope that Americans discover her before too long. It wasn't until after Patricia Highsmith's death -- and the smash hit film version of "The Talented Mr. Ripley" -- that Americans gave her her due. We shouldn't make the same mistake twice.