How does the "How the World Works" blog work?

A wonky, geeky, ranty exploration of how the global economy fits together. 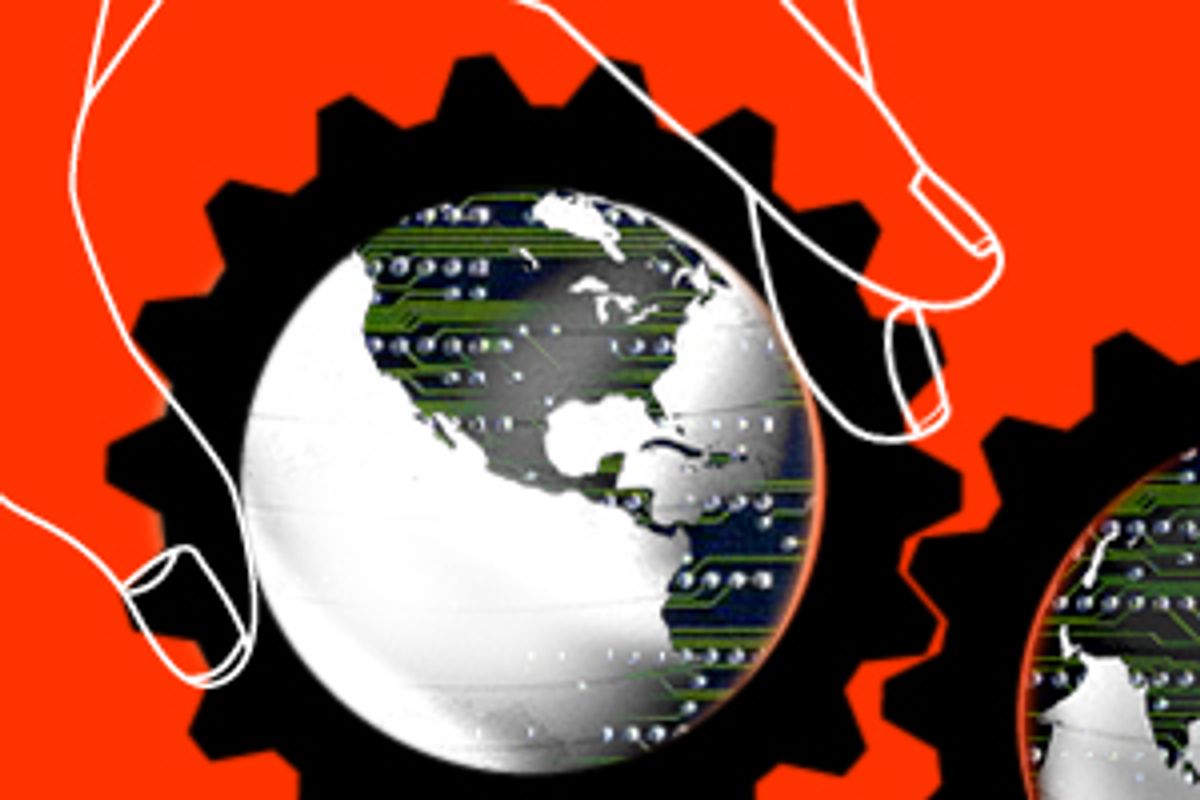 In the mid-1980s, I was an English teacher in Taipei, Taiwan. Like so many of my expatriate colleagues, in between hanging out in seedy discos and eating spicy Sichuan food, I earned my living teaching the ABC song and the rudiments of reading and writing to battalions of fresh-faced Taiwanese youngsters. It was a good life, while it lasted -- for 20 hours of work a week, I could live comfortably in a nice apartment and vacation on Thailand beaches every six months. But it was a life without a whole lot of self-reflection. Until one day, right in the middle of teaching a class, I caught my first glimpse of what we now know as "globalization."

I was a decent enough teacher in my regular classes, but I earned my keep in a special introductory class for small children that was only offered once every two months. For my school, this class was a crucial marketing event: Parents would bring their well-scrubbed 3-, 4-, and 5-year-olds in for an hour of instruction, watching me like hawks as they sat directly behind their spawn. If, after an hour of my high-intensity instruction, the parents liked what they saw, they would sign their kids up for the full course.

This was often the first sustained exposure to a foreigner these kids had ever had, and in some cases, this was also true of the parents. I took advantage of this. I always waited for the moment when, while I prompted a child to answer a question, a nervous parent would help the faltering kid by whispering into his or her ear.

"Parents," I would intone, in my best Mandarin Chinese, "must refrain from assisting their children during classtime. The child's attention must be solely focused on the teacher."

The parents would snap to attention. And my bosses, two Taiwanese women in their late 20s, watching the class through a plexiglass window, would smile and start to count their money. The parents had come to this school thinking they wanted an authentic American-born teacher, but the thing that always sealed the deal was my invocation of Confucian-ingrained respect for the moral authority of the teacher. I savored the mix-and-match, the unexpected juxtaposition of cultures.

For a year or so, I felt pretty pleased with myself, so deft at using my knowledge of China to lure parents into delivering their children into the embrace of my school. I may have even thought I had the upper hand in some kind of imaginary power play, like a latter-day 16th century Jesuit missionary who served his church by becoming more Chinese than the Chinese themselves. But then came my moment of overdue self-awareness, in the middle of class one day, even as I hooked another batch of customers.

I had always known why these parents were bringing their kids to me for English instruction. They were looking for an edge in the global economy. For citizens of a small country that lived or died depending on how well it could export goods, facility in English was essential. It seemed that all the parents in Taiwan's thriving middle class were determined that their children grow up proficient in the language, and they were unsatisfied with the generally poor quality of English taught in the public school system. They wanted more.

My moment of enlightenment was the realization that while I was playing my small role in helping an entire nation leverage itself up the ladder of global commerce, I wasn't really doing much at all to improve my own prospects for thriving into the 21st century. (I was spending a lot more time teaching English than studying Chinese, for example.) Hell, if anything, I was helping to make the world a more competitive place for me, and for people like me. Like the Silicon Valley venture capitalists currently racing to China to fund start-ups that will one day wrestle for supremacy with the American companies that those same V.C.s funded a generation ago, I was seeding the future with my own nemesis.

What, I wondered, was my equivalent of learning English. How could I figure out my niche in the global economy? Teaching English to Taiwanese preschoolers suddenly didn't seem to be the best preparation for the future. Inspired by the example of the Taiwanese, who in every aspect of their lives seemed to be constantly striving to do better, I decided I needed to go back to school myself, and start studying how the world works a little harder.

Twenty years later, "globalization" is a buzzword on everyone's lips, and the "threat" of Chinese competition is front and center for parties as diverse as organized labor, the U.S. Congress, Silicon Valley and Hollywood. I keep waiting for that moment when I'm interviewing an engineer for a Taiwanese semiconductor company or a lawyer for a Chinese intellectual property firm and he or she turns out to have been one of my students two decades back. And every time I hear the statistic about how there are more people studying English in China than there are citizens of the United States, I feel a visceral sense of connection. I was part of that link between nations.

The sense of connection and interrelatedness that is essential to globalization is what this blog is going to be about. It's not always a positive relationship -- just ask the Midwestern auto industry workers whose pensions and wages are being slashed as a direct result of foreign competition. And it's not always an obvious connection: I am endlessly fascinated by how the digital technology advances (computers, the Internet) that push globalization are responsible both for vast intellectual property violations and the rise of the open source software movement (Linux, Firefox). They are flip sides of the same basic transformation. A core element of globalization is that information travels everywhere, more cheaply and more quickly than ever before. We've only just begun to understand the implications of this.

But most often, when we explore globalization, the details are just plain obtuse. Unfurling the complexities of such questions as how to balance free trade and domestic protectionism is hard, and I would be the first to acknowledge that I don't understand more than a fraction of the issues at stake. For example, I'm fascinated by the riddle of how U.S. interest rates, the value of the Chinese yuan, and the American real estate boom are all part of one intimate equation, but I read 10 different economists' takes on the problem, and I see 10 different predictions on how it will all play out, and I don't know who to believe.

This blog, with its hubristic title "How the World Works," is a stab in the dark at exploring the territory of globalization, at finding believable answers to complicated questions. Sometimes it might get a little bit wonky -- there's no way to understand what's going on in the world today without plunging into the arcane world of high finance, and that is a direct invitation to high-order wonkiness. Sometimes it might get a little personal -- my favorite blogs are the ones that have voice, as well as meat, and so there's always going to be space here for the occasional rant. Sometimes it might seem to be weighted a bit toward the Far East, and not just because I'm fluent in Mandarin and studied Chinese history and politics for more than a decade. You cannot write about globalization without writing about China. It is part of every story, and that truth will only become more so in the future.

But whatever the particular flavor, whether the angle is China, open source software, free trade or derivatives trading, whether we're trying to understand the plight of the American factory worker or the challenge posed by the Shanghai semiconductor manufacturer, the underlying goal is to ask questions that shed light on how it all fits together. How does the world work? Let's find out.

China Globalization How The World Works