The Jesus symbol, the witch and the wardrobe

The religious right is hyping "The Chronicles of Narnia." But just how Christian is C.S. Lewis' masterpiece? 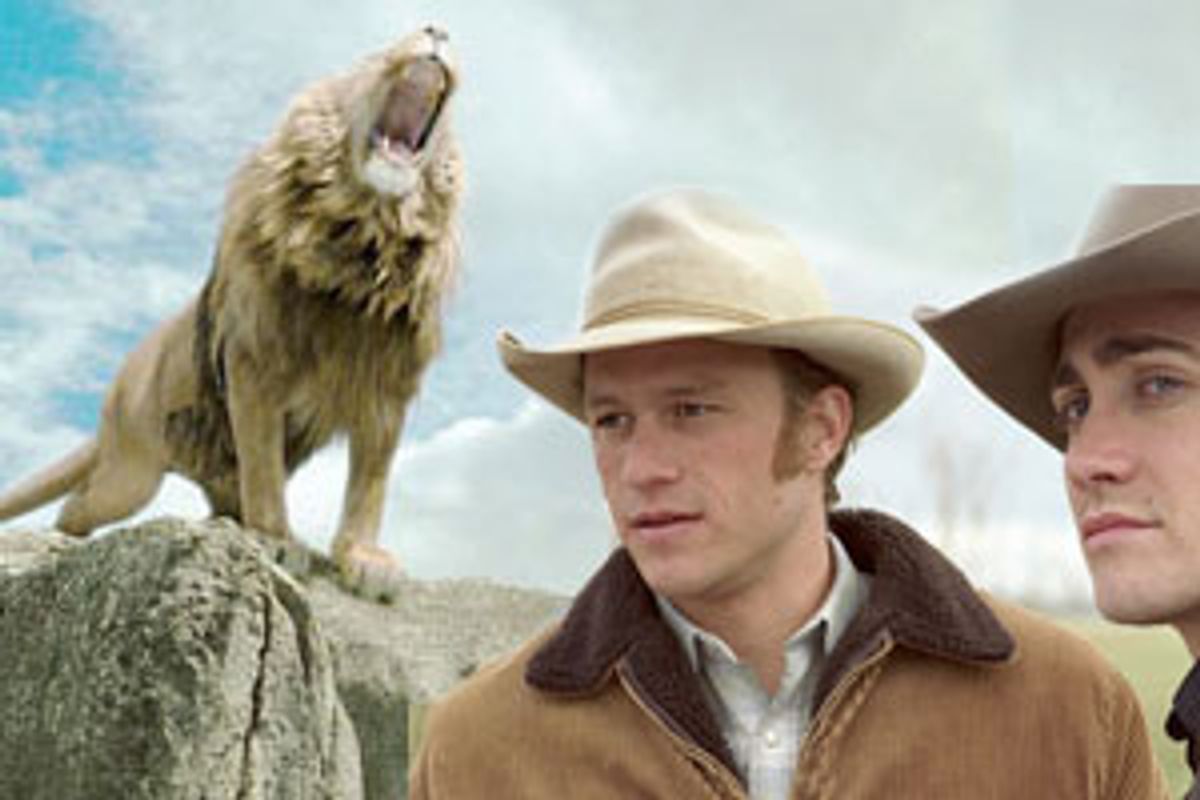 These are antsy days for anyone who has loved C.S. Lewis' "Chronicles of Narnia." Even people with unambivalent memories of the series have reason to be apprehensive about the new big-budget film of "The Lion, the Witch, and the Wardrobe." How often has the screen version of a magical world you passionately entered into as a child lived up to your own imaginings? But those of us who fell for Narnia without realizing the books' Christian subtext have particular reason to be unsettled. The movie is poised to flush us out: Can we still cherish the books without believing in their most obvious message? Will we still enjoy them after critics remind us of their flaws and unsavory organizations embrace them as pious family fare? Will we still feel like reading them to our own kids?

Before the age of Harry Potter, favorite books were an intensely private preserve for children. Movies, TV and comic books were things lots of kids talked about at school, but by the time you were old enough to have graduated from picture books, chances were most of your friends hadn't read or liked the same titles. At best, you shared a favorite book with one other friend, and it was something you conferred about quietly, if intensely, at the playground's edge.

Perhaps that's why so many children have remained blissfully ignorant of the Christian subtext to Narnia for so long; if no one notices your bubble, they won't be tempted to burst it. Santa Claus has lots of eager, pint-size debunkers because his doings are the talk of the under-8 set for at least four weeks out of the year. I can't recall who first spoiled my intoxicating fantasies of escape to Narnia by explaining to me that Lewis was peddling the same stuff as dreary old Sunday school, but I suspect I read it somewhere -- and I know it didn't happen until I was about 13.

I avoided Lewis' books for years after discovering this "betrayal," but eventually I returned to them. Learning to appreciate a literary work's qualities when you disagree with it -- reveling in Milton's majestic verse even if you find his views on gender roles dismal, letting Dante carry you to the ragged fringes of human emotion even if you don't believe in his Hell -- that's a skill you learn only as an adult. Although I'm not a Christian, I still find Lewis' storytelling a fluent, silvery delight, his imagery potent, and the ethical struggles of his child characters eminently sympathetic and believable.

But it's a lot easier to finesse this kind of conflict on the sleepy, serpentine back roads of literature. Multimillion-dollar Hollywood productions feel a lot more like screaming interstate highways; you better know where you're going and exactly where you intend to get off.

It's easy to see why "The Chronicles of Narnia" would appeal to Hollywood right now -- they look like a can't-lose cross between Harry Potter and "The Lord of the Rings." But it's the added dash of another, more polarizing blockbuster -- Mel Gibson's "The Passion of the Christ" -- that makes the films troubling for those who'd rather not see their childhood dreams become another pawn in the war between red and blue America. In addition to the usual TV and newspaper ads and theatrical trailers, "The Lion, the Witch, and the Wardrobe" is being promoted by the Barna Group, a marketing firm that specializes in generating buzz on the Christian scene, by making advanced screenings, study guides and block ticket sales available to churches. Right-wing groups like Focus on the Family have endorsed the film.

Just how Christian are "The Chronicles of Narnia"? The question might seem absurd; the books' author, after all, was a famous Christian apologist who intended them to teach a form of the gospels. But one critic, at least, has challenged the legitimacy of Lewis' claim (voiced by the lion god Aslan, Lewis' Jesus surrogate) that "you were brought to Narnia, that by knowing me here for a little, you may better know me there." John Goldthwaite, a Christian himself and a scholar of children's literature, wrote an extended critique of the purported Christian underpinnings of the "Chronicles" in his intelligent, fiery and occasionally injudicious 1996 study of the field, "A Natural History of Make-Believe."

In essence, Goldthwaite argues that Lewis uses Narnia as a sheltered preserve for his own prejudices -- which, it must be admitted, were many and far from pretty. But closer to the heart of this critique lies Goldthwaite's assertion that "whenever a professed Christian feels he must create some wholly other world to explore the meaning of his religion, he is flirting with bad faith. When he fills that world with the make-believes of other religions, he is playing at polytheism. When he further sets sorceresses to rule over it, and werewolves, incubuses and wraiths, he is dabbling in Manichaean dualism, the idea that standing opposed to God's good creation is another, separate and equal, or nearly equal, creation given over to evil."

This argument is theological. If Christians choose to believe that evil is an independent entity (like Satan or the White Witch of Narnia), instead of understanding, as Goldthwaite puts it, that "the darkness that is in this world we are quite adept at casting ourselves, by eclipsing God's will with our own," they are lapsing into heresy. The true belief of Christianity is that God created everything and that because God is good, all creation is good. Evil arises when human beings exercise their free will by turning away from God and putting their own pride first. For purely evil creatures to exist, God would have had to create them, and God does not create evil.

As Goldthwaite sees it, whatever Lewis and his close friend J.R.R. Tolkien may have claimed about their work, it is not compatible with true Christian theology. These two men disliked and withdrew from God's creation -- the world as it is -- considering it corrupt, fallen away from an earlier period of grace that, strangely, they associated with various pagan religions. Both Lewis and Tolkien had theories about how pre-Christian myth prefigured the gospels, but Goldthwaite dismisses this as sophistry. Tolkien had an elaborate justification for the Christian value in creating "secondary worlds," but Goldthwaite finds it lacking in any "explanation for why renouncing the world for places lost in the abyss of time should be thought anything but a rejection of God's plan for the world ... Creating a Secondary World, after all, is in effect a declaration that God's creation is deficient." It would be easier to shrug off this claim as excessive if there weren't so much evidence that Lewis and Tolkien considered this world to be just that: deficient -- compared to the fantasy worlds of their own invention.

Fortunately, this is not a distinction that the non-Christian Narnia- (or Middle-earth-) lover has to parse. Rather, such paradoxes remind us that the work an artist professes to make is often quite different from the work he actually does make. Even Lewis would agree that art springs from sources that the artist never fully understands. In fact, Lewis himself wrote a famous essay that undermines the notion that "The Chronicles of Narnia" are merely a way to acquaint us with Jesus under another name.

Lewis is one of the great writers about reading -- most of the lazy and troublesome biases that afflict his fiction seemed to fall away in the sympathetic act of meeting another writer on the page. In the essay "On Stories" he describes a conversation he had with one of his students at Oxford, about "the books which had delighted our boyhood." The student had loved James Fenimore Cooper, and vividly remembered a scene in which an Indian with a tomahawk crept toward the book's hero as he slept by a campfire.

What the student remembered about the scene was its "agonized suspense," but Lewis thought there must be more to it. Although Lewis had never read the book himself, he knew what he would have thrilled to in reading the same passage: "Take away the feathers, the high cheek-bones, the whiskered trousers, substitute a pistol for a tomahawk, and what would be left? For I wanted not the momentary suspense but that whole world to which it belonged -- the snow and the snow-shoes, beavers and canoes, warpaths and wigwams."

The student begged to differ, and in explaining this, showed Lewis "how totally his imaginative life differed from mine ... He would, if anything, have preferred to the Redskin some more ordinary danger such as a crook with a revolver." But for Lewis, the trappings were more than half the story: They were the premise of its attraction. Make the essential situation the same but swap a stubbly-faced hoodlum with a gat for the stealthy Indian in the woods, and all the appeal would be drained from the tale. It would, in truth, be a different story entirely.

Years later, Lewis wrote that he wanted "The Chronicles of Narnia" to take the parables of the New Testament and cast them "into an imaginary world, stripping them of their stained-glass and Sunday School associations," hoping that this would make them "appear in their real potency." Perhaps this statement implies -- as per Goldthwaite -- that Lewis thought he could do a better job of conveying Jesus' message than the gospels do. But it certainly contradicts what Lewis himself once wrote about the centrality of "associations" to the art of story making.

Lewis didn't just subtract "stained-glass and Sunday School" from the lessons of the New Testament: He added fauns, centaurs, talking animals, witches, dwarves, Turkish delight and four English schoolchildren. By his own calculation (as applied to James Fenimore Cooper), he changed the very identity of the story. Even if the "Chronicles" didn't violate Christian doctrine by Goldthwaite's exacting standards, they would elude it in another way, a way that Lewis himself described and believed in.

So when the film of "The Lion, the Witch, and the Wardrobe" opens, and if it's good, and if millions of children see it and fall in love with it, what they will love about the film, and the books if they seek them out, will be Narnia's equivalent of "the snow and the snow-shoes, beavers and canoes, warpaths and wigwams." If they don't realize that all this supposedly conceals a Christian message like a drop of monotheistic medicine concealed in a spoonful of pagan sugar, we'll be foolish to think they've been duped. If they're like the generations of children before them, they won't see or learn the lesson Lewis was trying to teach. Instead they'll see battles and adventure and magic -- and who's to say that's not what really counts?