Jake Gyllenhaal and Heath Ledger play two cowboys in love in this mainstream movie that is not nearly as brave as it might have been. 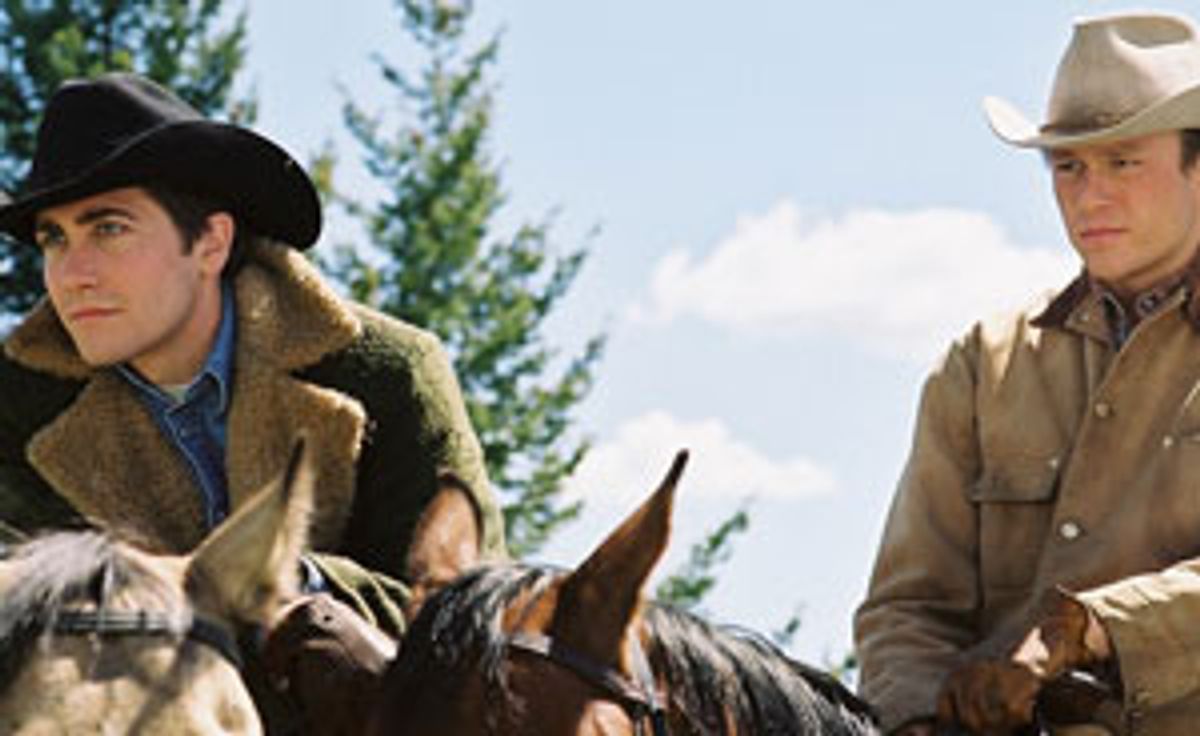 The premise of Ang Lee's "Brokeback Mountain," based on an Annie Proulx short story, is something we've never seen before in a mainstream picture: In 1963 two young cowboys meet on the job and, amid a great deal of confusion and denial, as well as many fervent declarations of their immutable heterosexuality, fall in love. Their names -- straight out of a boy's adventure book of the 1930s, or maybe just the result of a long think on the front porch at some writers' colony -- are Jack Twist (Jake Gyllenhaal) and Ennis Del Mar (Heath Ledger).

The attraction between Jack and Ennis is at first timid and muted, the sort of thing that might have amounted to nothing more than a vague, sleep-swollen fantasy. But when they finally give in to that attraction, in a cramped tent out in rural Wyoming -- the sheep they're supposed to be guarding are far off on a hillside, most likely being circled by lip-smacking coyotes -- the very sound of their urgent unbuckling and unzipping is like a ghost whistling across the plains, foretelling doom and pleasure and everything in between.

This early section of "Brokeback Mountain," in which the men's minimal verbal communication transmutes into a very intimate sort of carnal chemistry, is the most affecting and believable part of the movie, partly because young love is almost always touching, and partly because for these cowboys -- living in a very conventional corner of the world, in a very conventional time -- the stakes are particularly high. Later in the movie, Ennis will recount a story from his childhood, in which a rancher who'd set up house with another man was viciously murdered. (Ennis' father made sure the boy saw the mutilated corpse, a way of scaring the kid into growing up straight.) Jack and Ennis are, after all, risking their lives for love.

But by the time the 134 minutes of "Brokeback Mountain" have ticked by, the stark, craggy poetry of its beginning feels like a faraway, rearview-mirror memory -- an echo of the way Jack, after first meeting Ennis, surreptitiously scrutinizes him in a car's side mirror. "Brokeback Mountain" takes great pains to be a compassionate love story; but the filmmaking itself, self-consciously restrained and desiccated, is inert and inexpressive. After those first risky mountainside idylls, the relationship between Jack and Ennis supposedly grows and deepens, through long separations and marriage to other people (their wives are played by Michelle Williams and Anne Hathaway). But we're never allowed to see how Jack and Ennis navigate those changes. One minute they're kissing hungrily and furtively, reunited after spending many years apart; the next they're cuddling on a motel bed, sharing whispered hopes and fears about their future, or lack thereof. Lee and his actors give us the occasional snapshot of intimacy, but that's not the same as wrapping us in its glow, or making us feel the danger of it in our bones. This is an unconventional love story that's carefully calibrated to offend no one. "Brokeback Mountain" risks so much less than its characters do -- it's a closeted movie.

Lee's style of filmmaking pretends to be visually generous: The early scenes are quite lovely, featuring glorious mountain vistas threaded with flocks of sheep, their barely perceptible shapes vibrating like white molecules. (The cinematographer is Rodrigo Prieto.) But the longer you watch, the more oppressive the pretty scenery becomes. Lee relies on massive visual metaphors to get his points across: When Jack and Ennis are together (they manage to sneak away from their wives a few times a year, ostensibly on male-bonding-style fishing trips), we see them framed against majestic mountain backdrops, as clear, sparkling rivers rush by -- obvious symbols of the natural, pure quality of their love. But in their homes, Jack and Ennis are hemmed in, respectively, by expensively paneled suburban walls and drab, messy rentals where the mewling of hungry babies is a constant.

And that's where the professed unconventionality of "Brokeback Mountain" becomes threadbare. The movie's ultra-sensitive, ultra-tasteful sense of daring is really just a scrim for some pretty conventional cautionary impulses. This is what comes of denying your true nature: You get stuck with a frowsy, unhappy wife in a shabby housecoat, clutching a coffee cup as she stares into space.

But then, of course, this isn't the wives' movie: It's a movie in which women don't figure much at all. Jack and Ennis are essentially early-'60s-type men, and although the movie does give us a few scenes showing Ennis tending to his sick daughters, and one of Jack driving his son around in a big tractor, most of the child-rearing is left to the womenfolk. The movie occasionally pretends to be mildly interested in these jilted spouses, particularly Ennis' wife, Alma, played by Michelle Williams. Williams, an expressive actress who's only just beginning to find out what she can do, has some good scenes, although mostly she's required to suffer silently in the couple's dismal flat. (Ennis works hard as a ranch hand, but he never makes quite enough to support his family, let alone buy paint or lightbulbs.)

But Anne Hathaway, as Jack's wife, Lureen, barely registers as a character. When we first meet her -- she's a young rodeo princess with a wild sex drive and an even wilder smile -- she jolts the movie awake like a pistol shot. But as the story limps along, moving from the '60s to the mid-'70s, her outfits get progressively louder and her teased tresses progressively blonder. She's a hairhopper by necessity, as if Lee had reached his quota of real human beings and needed to fill out the corners of his story with cartoons. Her final scene, in particular, is baffling. Lee directs it in such a way that we have no idea what it means: We go through the whole picture with no idea how she feels about her husband, and the movie's ending gives us no further clues.

The focus, obviously, is supposed to be on Jack and Ennis, with as few pesky distractions as possible. Ennis is the silent type, and Ledger plays him as a man who's desperate to keep his feelings from leaking through his skin, sealing off every potential outlet: He squints through his most emotional moments, afraid to let any light in or out; and almost miraculously, he gets through a whole movie's worth of lines -- albeit spare ones -- while barely moving his lips. Ledger needs to clue us in to what Ennis is thinking and feeling without ever showing us, but the best he can do is to give us a reflective blank, a slate on which we can scribble our own ideas about what might be going on in his head, and his heart.

Gyllenhaal's eyes are as wide-open as Ledger's are shuttered -- they're huge, voracious and anxiously needy. Jack wants more from Ennis than he can give, and Gyllenhaal is at his best in the scenes where he just steps over the line of daring to plead. His overturned pride is far more visible in his face than it is in his reading of desperate courtship lines like "We can meet in November. Kill us a nice elk."

Dumb lines like that are essential to "Brokeback Mountain" -- its script is by Larry McMurtry and Diana Ossana, who also served as producers on the film -- lest we somehow miss the point that these are "real" men, not the sissified types we hire to redecorate our houses and arrange our flowers. And the movie makes that point with far more subtlety elsewhere, particularly in its early scenes, where Jack and Ennis wrestle and roughhouse in a way that's neither sexual nor asexual but just casually boyish: When the movie opens, they are very young men, after all.

With "Brokeback Mountain," Lee's intention, clearly, was to give us a romance between men, as opposed to a gay romance. This is a story about lovers separated by circumstance -- that they both happen to be men isn't inconsequential, but it isn't the central defining factor of their existence, either.

But even though "Brokeback Mountain" is a movie about feelings, it never deigns to have any itself. It's a thesis film masquerading as a melodrama -- there's something clinical about the way it keeps its two lovers so clearly focused under its microscope, documenting their hopes, their fears, their desperation, in a way that's calculated to avoid alienating the straightest of straight audiences. The greatest movie romances require us to make a leap with the lovers; this one keeps us at a safe remove from the edge. "Brokeback Mountain" isn't the revolutionary picture it might have been. Even so, it would be a greater tragedy if this failed attempt to tell a story about men in love turned out to be just a onetime curiosity, instead of a beginning.