21 leading Democrats who voted for the Iraq war resolution -- and what they're saying now. 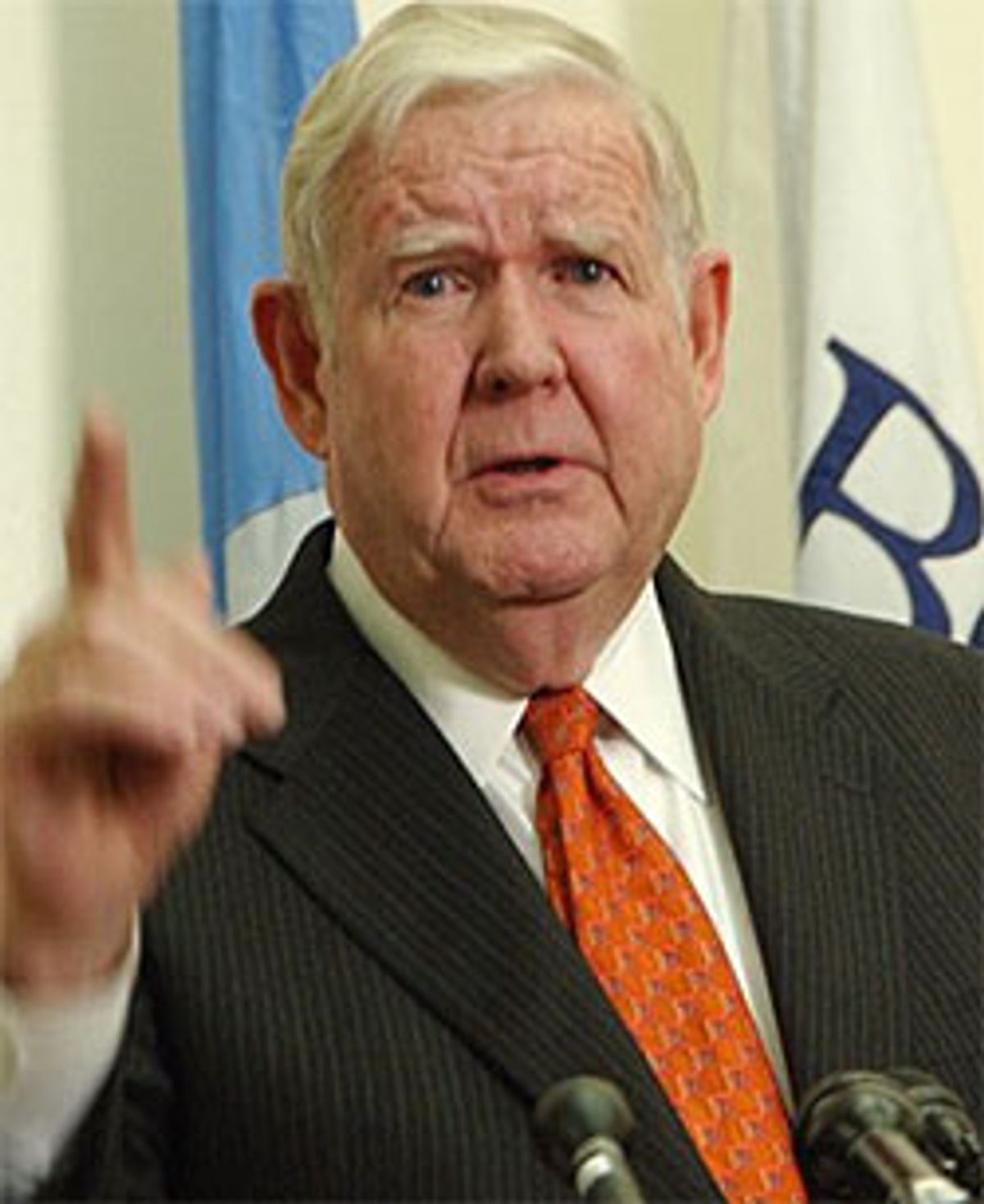 "Our troops have become the primary target of the insurgency. They are united against U.S. forces and we have become a catalyst for violence. U.S. troops are the common enemy of the Sunnis, Saddamists and foreign jihadists. I believe with a U.S. troop redeployment, the Iraqi security forces will be incentivized to take control ... I believe before the Iraqi elections, scheduled for mid December, the Iraqi people and the emerging government must be put on notice that the United States will immediately redeploy.

"To immediately redeploy U.S. troops consistent with the safety of U.S. forces;
"To create a quick reaction force in the region;
"To create an over-the-horizon presence of Marines;
"To diplomatically pursue security and stability in Iraq."

Sen. Joseph Biden Jr. of Delaware, December 2005
(In a statement to Salon)

Norm Kurz, the senator's communication director, said that despite some calls for an immediate pullout from Iraq, Sen. Biden has "never believed in a specific timeline" for a troop drawdown. "Pulling out precipitously is a problem," Kurz says, relaying Biden's view, "if what we leave behind is a haven for terrorists."

Sen. Evan Bayh of Indiana, December 2005
(In a statement to Salon)

Sen. Bayh's communication director, Dan Pfeiffer, said that while the senator believes a strategy to bring home the troops needs to be implemented, any plan must be "driven by events on the ground." Bayh, Pfeiffer said, rejects the mandatory withdrawal from Iraq by "any specific date."

"I do not believe that we should allow this to be an open-ended committment without limits or end. Nor do I believe that we can or should pull out of Iraq immediately. I believe we are at a critical point with the December 15th elections that should, if successful, allow us to start bringing home our troops in the coming year, while leaving behind a smaller contingent in safer areas with greater intelligence and quick strike capabilities. This will advance our interests, help fight terrorism and protect the interests of the Iraqi people."

Daschle is now touting a strategy he has developed in cooperation with the Center for American Progress, which calls for "bringing home the first 80,000 troops beginning this January and no later than the end of 2006. The plan redeploys 20,000 American troops to Afghanistan to help finish our job there, including the capture of Osama bin Laden. Finally, the plan calls for the last 70,000 American troops to come home by the end of 2007."

"This debate is not about an artificial date for withdrawal ... No one is talking about running in the face of a challenge. We're talking about how to win, how to succeed, how do you best achieve our goals? That's the choice here...

"So what the president did not acknowledge today at all is that the presence of our troops itself is a part of the current reality on the ground that presents food for the insurgency. And you need to reduce that presence over a period of time in order to be able to succeed, not fail."

Former Sen. Max Cleland of Georgia, December 2005
(In a statement to Salon)

Michael Duga, Cleland's spokesman, e-mailed a statement saying that "Sen. Cleland believes that Americans should support John Kerry's plan for Iraq. We can remove 20,000 troops after the December 15th elections, and then continue to bring our soldiers home over the next 12 to 15 months as Iraqi citizens begin to defend their country and we achieve a political settlement among Iraqi factions. Our strategic redeployment is imperative so we can dedicate the necessary resources to kill or capture Osama Bin Laden and his terrorist cadre who attacked us September 11th, 2001."

Rep. Henry Waxman of California, December 2005
(In a statement to Salon)

"The planning for the war was botched and the occupation appears to Iraqis as unending, which has become a magnet for insurgency and terrorism. Without strong leadership by the new Iraqi government, a de facto civil war will take place. We cannot do the job for them; they must do it for themselves. I support a withdrawal of troops as soon as possible, with a specific timetable so the Iraqis know they must take over."

Rep. Harold Ford Jr. of Tennessee, December 2005
(In a statement to Salon)

According to Rep. Ford's communication director, Corrine Ciocia, the congressman "doesn't support an immediate pullout" anytime soon. Instead, he suggests that President Bush bring in a new national security team, renounce permanent military bases in Iraq, and start an international fund to build hospitals and schools across the Middle East as part of a broad plan to "finish the effort in Iraq." Ford said recently that "we need some new ideas and strategies to squash or suppress this insurgency in Iraq so we can plant the seeds for democracy and, most important, bring our troops home."

The United States should "consider pulling troops out soon after the Dec. 15 elections. Get surrounding countries, particularly Arab League nations, to do more to help broker peace between Iraq's warring factions. Get NATO more involved in training troops and require the president to set up 'estimated dates' for pulling out troops."

"We demand that the Intelligence Committee and other committees in this body with jurisdiction over these matters carry out a full and complete investigation immediately as called for by Democrats in the committee's annual intelligence authorization report. Our troops and the American people have sacrificed too much. It is time this Republican-controlled Congress put the interests of the American people ahead of their own political interests."

Sen. Feinstein believes that continued American military presence in Iraq has become a liability and a reduction of American troops is necessary to avoid further sectarion violence. "America needs to change course, reassess its mission in light of this escalating insurgency, place more responsibility on Iraq for a negotiated settlement, and begin a structured drawdown of American forces."

"What a colossal mistake it would be for America's bipartisan political leadership to choose this moment in history to lose its will, and in the famous phrase, to seize defeat from the jaws of the coming victory ... If all goes well, I believe we can have a much smaller American military presence there by the end of 2006 or in 2007, but it is also likely that our presence will need to be significant in Iraq or nearby for years to come."

"We've reached the point where the large number of our troops in Iraq hurts, not helps, our goals. Therefore, early next year, after the Iraqi elections, when a new government has been created, we should begin redeployment of a significant number of troops out of Iraq. This should be the beginning of a gradual process to reduce our presence and change the shape of our military's deployment in Iraq."

"Even now that sovereignty in Iraq has been turned over to an interim government, much work remains. And the U.S. military will continue to bear much of the burden, as foreign armies remain hesitant to send large numbers of troops to Iraq. U.S. forces will continue to be charged with the task of protecting Iraqi civilians, as well as international personnel."

Rep. Skelton currently supports a plan that emphasizes a "strategic redeployment" of American forces where for every three Iraqi brigades that attain Level 1 readiness -- "the capability to plan and fight independently without any assistance from U.S. forces" -- one American brigade will be redeployed from Iraq. "I realize there are a variety of reasonable ways to look at benchmarks for strategic redeployment, but I think any of them must clearly link to the development of Iraqi Security."

Dan McLaughlin, a spokesman for Sen. Nelson, said the senator "feels in regard to establishing a timetable for troop withdrawal that is not the way to go ... At this point, the long-term national security interests are paramount issues, and cutting and running in Iraq is not the solution."

Sen. Schumer calls for a "three-state solution," geographically dividing the Sunnis, Kurds and Shiites. "I wouldn't make it into three countries", he said, "but I would make it into three autonomous regions ... We'll say to them, You govern yourselves. We're not going to tell you who to pick. You govern yourselves. I think that is a plan that could work. And I think it's going to gain currency."

Rep.Wexler supports a six-month phased withdrawal after the December elections and endorses Rep. John Murtha's legislation, "which calls for a 'withdrawal at the earliest practicable date' in addition to the deployment of a U.S. rapid-reaction force in a neighboring country such as Kuwait. This 'over the horizon' presence is intended to ensure regional stability, assist Iraq in its continuing fight against terror, and reduce the likelihood of civil war."

Rep. Lantos, the ranking member on the House International Relations Committee, recently sent out a letter to thousands of his constituents stating that the United States should draw down its troop levels in tandem with the training of the Iraqi military. "Given the present pace of training Iraqi security forces, it should be our goal to begin reducing U.S. forces in the spring of 2006 and progressively to diminish the U.S. military presence in Iraq as the growing capability of Iraqi security forces warrants."

By Compiled by J.J. Helland

MORE FROM Compiled by J.J. Helland