"The Chronicles of Narnia: The Lion, the Witch and the Wardrobe"

Forget the scary hype: This magical movie, based on C.S. Lewis' beloved novel, is as familiar and comforting as a favorite sweater. 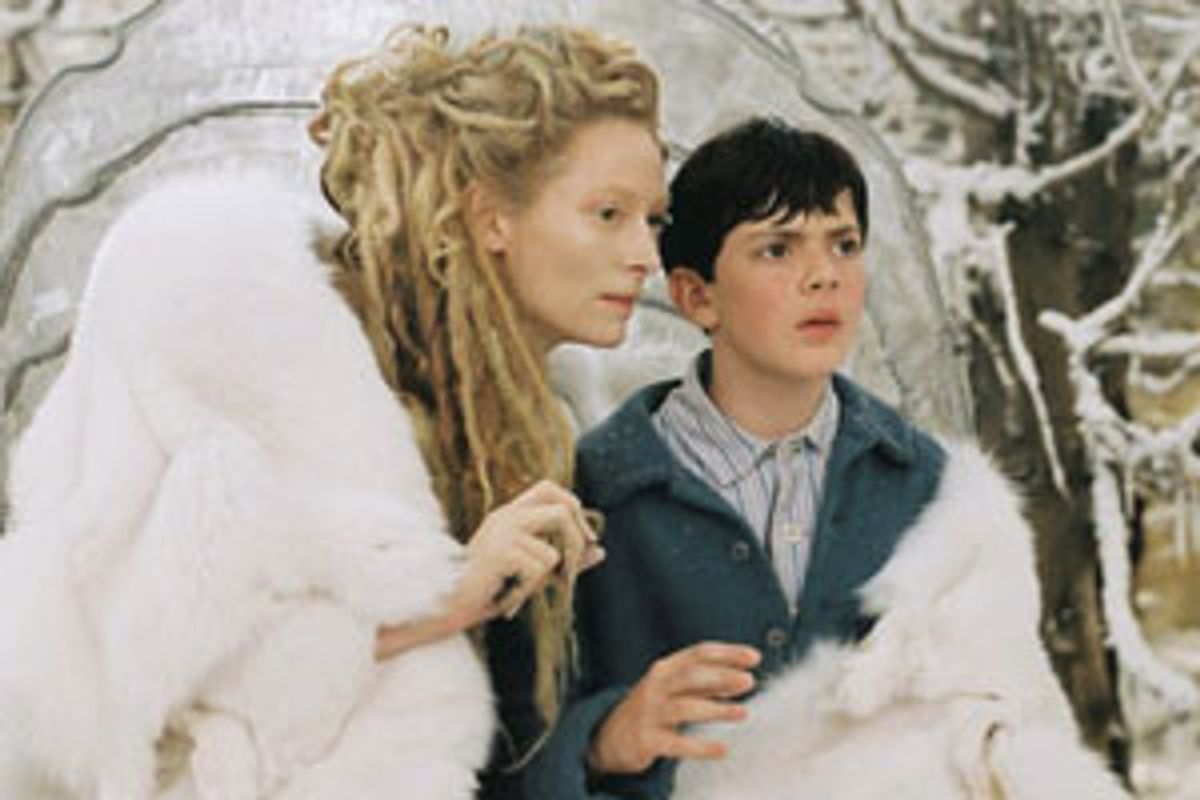 There's something a little ragged around the edges of "The Chronicles of Narnia: The Lion, the Witch and the Wardrobe": It has a vaguely faded, not-quite-new feel to it, like a hand-me-down book from a past generation, with cover wear and smudged pages and a wiggly spine -- all the things used-book dealers sniff at but which, to readers, are simply a book's way of wearing the love that's been lavished on it.

And that's exactly what makes this adaptation of C.S. Lewis' much-loved 1950 novel so wonderful. There's nothing too clean or too overbright about it. It's magic, but not the loud, shiny kind: It has the texture of worn velvet, or a painstakingly hand-knit sweater stored away for years in tissue paper.

The picture, set in England during World War II, opens with an air raid, as four siblings -- Peter, Susan, Edmund and Lucy Pevensie -- and their mother scramble for safety. It's decided, as it was for many English children at the time, that the young Pevensies should be sent away to the countryside to stay with a mysterious and eccentric uncle, Professor Kirke (Jim Broadbent, who makes two mischievous, whiskery appearances in the movie, one at the beginning and one at the end -- stay in your seat when the end credits start). The kids are a bit bored in the professor's vast, shadowy house, a nest of rambling stairways and doors to who-knows-where. But one day, during a game of hide-and-seek, the youngest Pevensie, Lucy (played by the wonderful newcomer Georgie Henley), makes her way into a massive wardrobe. She pushes her way to the back, only to realize this is a wardrobe with no end: Its dark forest of coats opens onto another world, a cold, icy one that, the children later learn, has long been under the spell of a chilly, imperious creature known as the White Witch (Tilda Swinton). Narnia is a land populated by talking beavers, foxes and badgers, and by fauns who negotiate the rough, snowy terrain on their furry, sturdy but delicate legs. The White Witch has ensured that it's winter all the time in Narnia, and there are no holidays to break up the coldness of the season: There has been no Christmas for 100 years.

The Pevensie children's old world felt unsafe and unsure enough, but this strange, new one is beyond anything they could have imagined. They also learn that, as humans (or "Sons of Adam" and "Daughters of Eve," as Narnia's inhabitants put it), they're part of a prophecy that, if it comes to pass, would destroy the White Witch's power.

There are obviously many reasons why C.S. Lewis' Narnia series -- of which "The Lion, the Witch and the Wardrobe" is the first installment -- have been captivating readers for so long. But I think one reason people respond to the Lewis books -- a reason that's ably served by this adaptation -- is that even though they take place in a fanciful universe, they show respect for kids' integrity and intelligence, instead of just treating children as charming but woefully undereducated beings. They also understand the occasional savagery of children, without passing judgment on it. Narnia is a place that stands to bring out either the best or the worst in children, or in anyone: The oldest two Pevensies, Peter and Susan (played by William Moseley and Anna Popplewell), are young teenagers, and they end up facing the first tests of adulthood in territory that's both bracingly but also terrifyingly unfamiliar.

For the two younger children, Edmund (Skandar Keynes) and Lucy, Narnia is a place that tests their integrity and challenges them to be self-sufficient. Edmund, in particular, is facing a difficult time. The movie's early scenes suggest that he's deeply unhappy about something: His malaise is unidentified (and unidentifiable), but we do know that the children's father is away fighting the war, and it's clear that Edmund fears he'll be killed. Edmund's adventures in Narnia not only bring his loyalty to the others into question, but also force him to define his own future. It's the first time he has to ask himself what kind of adult he wants to be.

But it's Lucy who's the soul of the movie, not because, as the youngest child, she's the most innocent character, but because she's the most heart-wrenchingly open. As Henley plays her, she's not a wide-eyed moppet but a highly introspective little person -- as some children are, she's a perpetual grown-up in training, without ever being precocious or show-offy or overcute. Of all the characters, her responses to what she sees and hears in Narnia feel the purest: She responds to talking foxes and beavers with appropriate curiosity and delight, but she takes them seriously, too. Unselfconscious and subtly expressive, Henley gives one of the most astonishing child performances I've seen in years -- maybe since Drew Barrymore's in "E.T."

Some of this may make "Narnia" -- directed by Andrew Adamson, whose credits include the two "Shrek" movies -- sound dreadfully serious and, well, messagey. And understandably, many fans of the Narnia books who've put up with or ignored the novels' Christian subtext (or overtones, depending on how you look at it) may be fearful that "Narnia," which has been heavily marketed to Christian groups, is really a religious movie in disguise.

But I'm not sure the Jesus imagery in "Narnia" is any more overt than what you get in "E.T." (he does, after all, have the power to heal and to rise from the dead). One of the movie's central characters is a noble lion named Aslan (voiced by Liam Neeson), an obvious Jesus stand-in. He's a lovely creature, with a mane the children want to sink their hands into, and with eyes whose noble blink feels like a benediction. But the most "Jesusy" section of "Narnia" is one that's played so powerfully -- it's moving and staggering at once -- that it can be read on any number of levels. I think, more than anything else, it speaks to our capacity for compassion, and if that's not nondenominational, I don't know what is. If certain religious groups want to lay claim to compassion as a brand, that's their business. But it shouldn't interfere with anyone's pleasure in "Narnia," or, for that matter, in C.S. Lewis' books.

And there's so much pleasure to be had in the look of "Narnia" that the experience feels somewhat decadent, anyway. There's Ray Winstone as a Cockney beaver with a fat, round shape (he's the one who explains to the children who Aslan is, describing him as "only the king of the whole world -- the top geezer!"). James McAvoy plays Mr. Tumnus, a polite, nervous fawn whose uniform consists of a red scarf wrapped around his neck and trailing down his bare chest. And the second half of the movie builds up to a majestic, and in some places intense, battle sequence in which satyrs, cheetahs, and humans stand up to the White Witch and her many followers, troops consisting of twisted-looking dwarves and rangy (and rather scary) wolves.

This is a movie that achieves a level of craziness that feels more operatic than it does outright Christian. And if Henley is the movie's soul, then its claws belong to Swinton's White Witch. The White Witch has eyebrows and eyelashes the color of snow; she wears her hair in a tumble of icy blond dreadlocks. Her stare is like a stab of metal; her smile, when she needs to muster one, is a tight little sliver of moon. Swinton makes a terrifying villainess because she's wholly devoid of camp. There's no silly swanning around for this deep-freeze diva: She strides through the movie in giant white ball gowns made of stiff wool felt, always the guest of honor at her own interior party. You feel certain you'll be able to leave the White Witch behind in the theater, but she follows you home and straight into bed, wrapping her chilly hands around your dreams. And when, during the big battle scene, she shows up in a spiky chariot drawn by two polar bears, you gasp at the image even though you know you should be laughing at its sheer craziness. That's when you realize you've bought the world of "Narnia" on its own terms.