It's a McWorld after all

A writer and a photographer visit 30 families around the world to show us what the world eats -- and how industrial food is creeping into every corner of the globe. 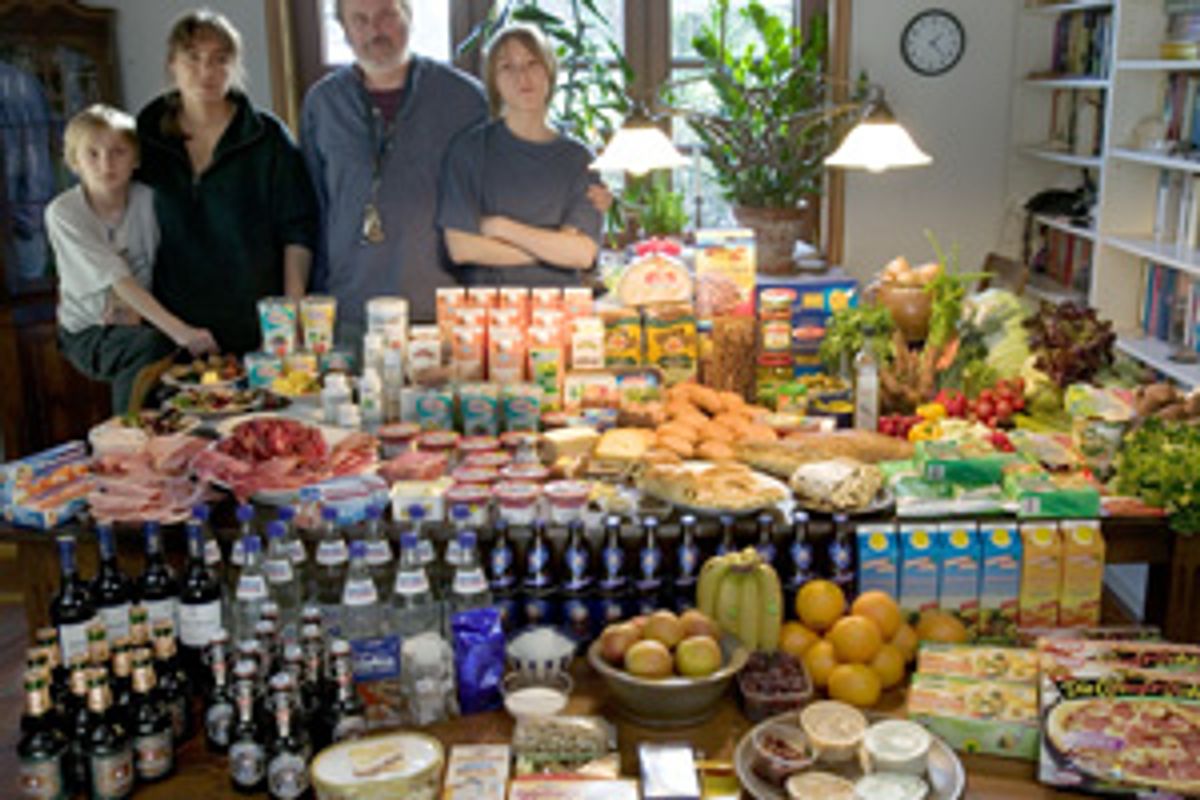 Twelve 2-liter bottles of Coca-Cola line the back of the table in the Casales family portrait that appears in "Hungry Planet: What the World Eats." The Casaleses are a mother, father and three young sons living in Cuernavaca, Mexico, and the six gallons of Coke are part of their weekly diet. They drink it with nearly every meal. The oldest son, 7-year-old Emmanuel, is already overweight. Like his parents, he has come to resemble the squat, narrowed-at-the-neck bottles that are slowly killing him. And the Casales family is not alone; 65 percent of the Mexican population, the world leader in per-person consumption of Coca-Cola, is now obese or overweight.

But "Hungry Planet" is not a book about obesity or corporate villains; it's something much grander. Its premise is simple to the point of obvious and powerful to the point of art. Peter Menzel has photographed 30 families in 24 countries along with the food they will consume in the course of a week, while his partner, Faith D'Aluisio, has written a brief profile of the eating habits of each. Menzel and D'Aluisio are the same pair that produced the 1995 bestseller "Material World," a collection of portraits of "statistically average" families, and their worldly possessions, in 30 different countries. "Hungry Planet" follows the basic pattern of the earlier book. Each family's food for the week is cataloged and priced, and each profile is accompanied by a statistical breakdown of their country and a family recipe. Alongside all this are hundreds of richly colored and quietly composed photographs and six short essays from food-writing luminaries. The cumulative effect is that of being welcomed into the homes of 30 working families around the world.

Meet the Browns of Riverview, Australia, a three-generation family of seven that eats 60 pounds of meat in a week; the Madsens of Cape Hope, Greenland, whose diet is built around hunted musk ox, walrus, geese and polar bear; the Manzos of Sicily, who are surprised to discover that, as a couple, they smoke 20 packs of cigarettes per week; the Natomos of Kouakourou in Mali, a Muslim family of 15 in which the two wives take turns cooking millet porridge each morning; the Melanders of Bargteheide, Germany, whose $500 worth of groceries -- spread before the four of them in neat rows of cartons and bottles -- includes $90 in vitamins and supplements; and the Aboubakars, six Sudanese refugees encamped in Chad who subsist primarily on a 40-pound ration of unmilled sorghum.

That the Melanders can spend 400 times more money on food than the Aboubakars are able to earn in a week suggests that the distribution of resources worldwide remains distressingly out of whack. In "Hungry Planet," the difference between the half of the world's population that still lives on less than $2 a day and the rest of us is made visible in the contrast between the families sitting, often on dirt floors, behind sacks of grain or root crops and those standing around tables piled with cellophane-wrapped meats and branded foods. Many readers, I'm guessing, will share in my uneasiness at the thought of the indictments to be found in a picture of one's own family standing next to a week's worth of food. In my case, there would be an alarming number of to-go containers and bottled beverages and too few fruits and vegetables.

The dominant sentiment evoked by "Hungry Planet," however, is not one of shame but one of anxiety. Out of the 30 family portraits emerges a larger picture of a global civilization rushing headlong toward an economy in which food is a thing produced remotely by machine labor and a handful of experts and then sold (or given away) by multinational organizations -- an economy in which we identify a piece of food by its logo rather than by its biology. This is an economy already familiar to many of us in what is called the developed world, and it is growing grab by grab on the international market.

This transition to industrial food is manifest on almost every page of "Hungry Planet," from the Bhutanese monk swigging from a bottle of Pepsi at a celebration of the arrival of electricity in his village to the Polish family navigating the new "hypermarket" built on countryside once given over to collective farms.

The main marker of the jump to an oil-dependent, cash-crop economy is the same as that of the divide between rich and poor -- a diet shift away from cereal grains and fruits toward animal fats and refined sugars. This shift brings increased rates of obesity, which is fast becoming epidemic. As Alfred W. Crosby writes in one of the book's six essays, "The number of us who suffer from the diseases of overeating may be, for the first time in history, approaching that of those suffering from undereating." The problem is particularly acute in the United States. In another of the essays, Francine Kaufman notes that "one in every three children born in the United States in the year 2000 will have diabetes some time in their life." Clearly the main beneficiaries and victims of the new food economy are the generations that grow up within it.

Over and over again in "Hungry Planet," these massive economic changes are played out in the fears of grandparents, the aspirations of parents and, most of all, in the appetites of children. Kids everywhere, it appears, crave McDonald's. In Riverview, Australia, 5-year-old Sinead Brown charms her grandfather, who grew up rustling porcupine in the bush, into buying Happy Meals for her five or six times a week: "Pop, do you think we could do something about Mackas?" she asks, using the Aussie slang for McDonald's. Her mother repeatedly tries and fails to cook fries to match that unmistakable Macka's taste. In Beijing, a father beams with pride at his teenage son's twice-a-week McDonald's habit, "He's growing up differently than I did." The Cui family in rural China has yet to encounter Western fast food, but attitudes toward it are already divided along generational lines. Six-year-old Cui Yuqi looks forward to trying some. His mother "apprehensively" says she would try it. His grandparents "want no part of it."

Centuries-old traditions and deep reserves of local knowledge are, of course, lost in the transition to a McDonald's economy -- as, often enough, is even a rudimentary knowledge of kitchen work. The 52-year-old grandmother in Riverview, Australia, tells of the time her children and grandchildren were confused at the sight of her boiling tea from loose leaves. "Haven't you been educated in anything?" she asks them. But since the traditions lost usually involved long hours of stooped labor for a meager existence -- such as the reconstruction of earthen watering troughs performed daily by 12-year-old Amna Mustapha and the other daughters of Dar Es Salaam Village in Chad -- the changeover to a cash economy is usually counted as progress. Homegrown is just too much work when you can have store-bought.

Or so the choice is frequently presented. We can lead sedentary lives and grow comfortably fat on uniformly bland food or we can go back to laboring dawn to dusk at the edges of hunger. The mothers in Turkey, Bhutan, Mongolia and the Philippines who do this kind of work -- and it is women who carry the heaviest burdens throughout the book -- are united in a desire to see their children escape it. "I want them to make a good living using their minds, not their bodies," says 33-year-old Melahat Celik of Istanbul of her three children. Melahat, who cooks and cleans for six different families in the city, is expert in the preparation of Turkish pastry and baffled by her children's attraction to fast food. But on the rare occasions when she can spare the money, she takes them to the McDonald's at the local mall.

Perhaps we are simply destined to live in a world where local cultures exist only as residue preserved for the sake of tourists. If our children's children want to know about hand-grinding barley on a stone or spreading manure on fallow fields, they can read about it in "Hungry Planet." A review of the book, really, should be written 50 or 100 years from now. What will they say then about a time when half of China's workers were still agricultural and Kuwaitis ate their pick of the world's bounty in the middle of a barren desert? Will the women of Todos Santos in Guatemala still cook their own tortillas? And on All Saint's Day will a mob of men on horseback still "race back and forth down the main road into town  stopping at each end of the course to take a pull of hard liquor" until the last rider gives up or passes out, as Menzel describes in one of his field notes?

The softly voiced hope of "Hungry Planet" is that the other half of the population can join us in having enough to eat without all of us living in a McWorld. Corby Kummer of the Atlantic Monthly argues in his essay that the best way to fight fast food may be to subvert it: "Those who wish to return to regionalism, to a more equitable farming system, and to a safer environment need to be more inventive than simply deciding to declare war on fast food." Kummer suggests we invent a compromised version of the chain restaurant -- one that treats workers better and that buys a meaningful percentage of its food from local growers. "A serious rival should start," he writes, "with streamlined, bland recipes that make spurious claims of Mexican and Wild West connections. Aim for anonymity and consistency. Spend a fortune promoting an image of young people having fun." This third way may be the best we can hope for until the day when "fast food will be a distant memory."

For the Casales family back in Cuernavaca, a change can't come soon enough. Between the time that Menzel took their portrait and D'Aluisio wrote their profile, Marco Antonio closed the family's convenience store (which he had opened after losing his job at a brewery) and crossed illegally into the U.S. in search of better wages. So far he has only been able to find 20 to 30 hours of work a week, at $5 an hour. The money he sends home is not enough to support the family's old Coke habit so they are down to four quarts a week. The indignities suffered by the Casales family in the churning of the global economy -- the all too common story of a father separated from his family and working for inadequate wages without legal protection -- make the hard of life of the Aymes family in the mountains of Ecuador seem almost ideal. Ermelinda and Orlando Aymes have to work ceaselessly to secure the $35 worth of potatoes, rice, flour and bananas that sustain them and their seven children for the week, but they work together and they own the sources of their livelihood.

It is no accident that Orlando is a voice of reason when it comes to fast food. He tried it once while studying in the nearby city of Ambato. "It was meat on bread," he says. "It was okay, but a bit strange. And I wasn't able to see how it was made."