'Tis the season to obsess about food

Thanksgiving yams, Chanukah latkes, Christmas cookies ... for me, they all add up to a holiday-size serving of self-hatred. 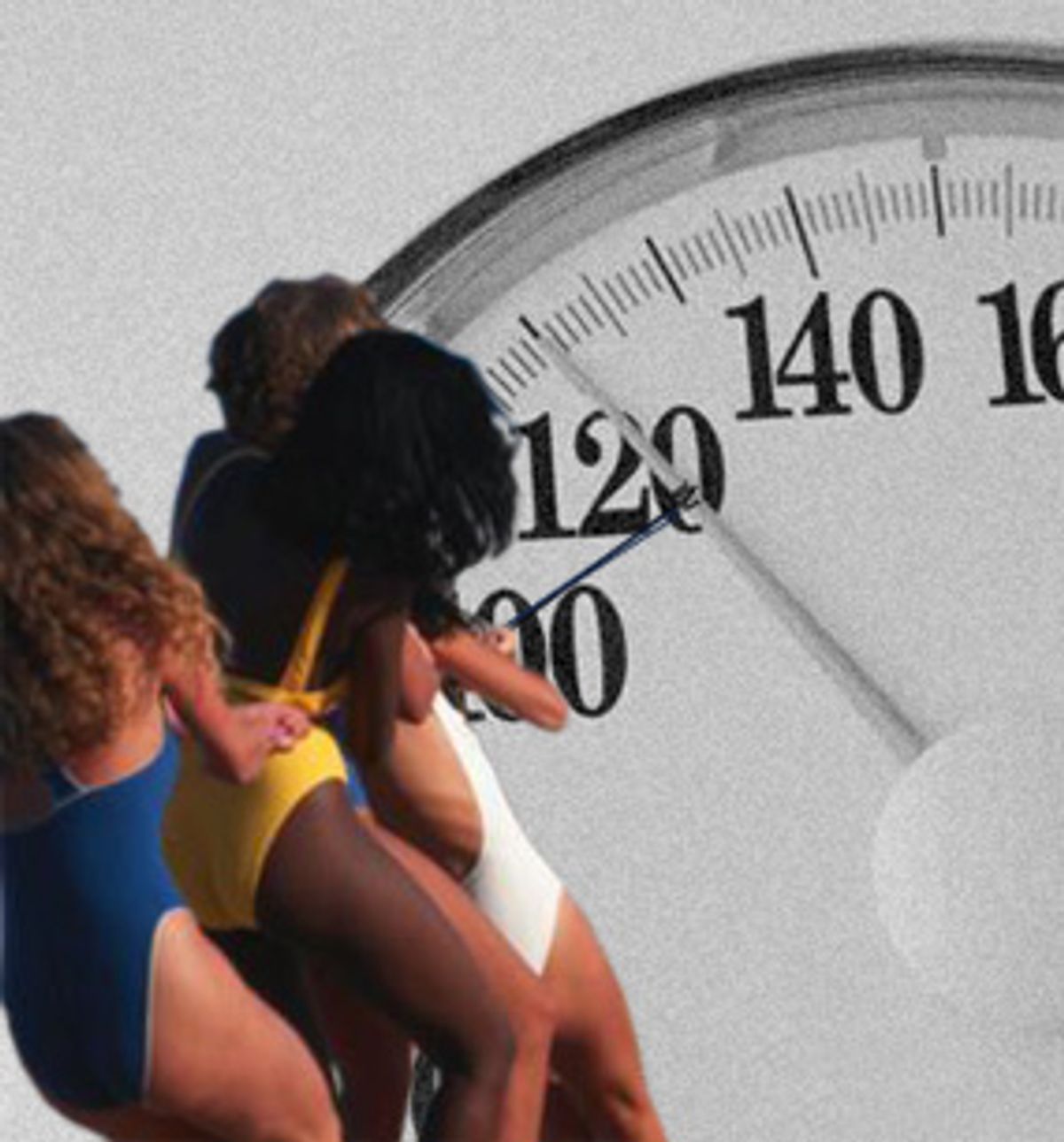 The glorious cooks who invited my family to share their Thanksgiving this year used four pounds of butter preparing the dinner. And that's just the butter. I couldn't begin to weigh the lard, the bacon grease, the cream and all the other delectable fats. Our hostess is from Kentucky and our host is from New Orleans and between the two of them they made a dinner to die for. There was the turkey (smoked), there were the usual yams and potatoes and collard greens and buttered green beans. There was stuffing. And then there was the oyster dressing, the smoked brisket with barbecue sauce, the fresh crab cakes, the duck, the smoked salmon, the corn bread, the yam-pecan muffins, the dirty rice (sausage, chicken livers, ground pork. Divine), and the nine pies.

I gorged myself and was sorry there was no trough in which I could imitate the Roman Caesars between courses. I ate so much I had to surreptitiously inch down the zipper of my skirt. I ate so much I was sick for days.

But then, of course, I was depressed. Because as amazing as dinner was, as delightful the meal and the company, I inevitably greet all culinary excess with panic and despair. The worst season is the one that begins with buttered yams, works through latkes and Chanukah donuts, and ends up in a gluttony of Christmas cookies and chocolate. Thanksgiving dinner was amazing, one of the highlights of my year, but all that pleasure is destroyed by the possibility that I might have gained a pound.

Yesterday I turned 41, and if I were to calculate the amount of time I have spent over the course of these four decades obsessing about my weight, it would surely clock in as more hours than I've spent eating, writing, exercising and having sex. Combined. In fact, the only thing I can think of that consumes more of my day than fat-phobic freakouts is reading.

What a colossal and ridiculous waste of time.

At least I'm not alone. Most every woman I know is totally nuts when it comes to her weight. This phenomenon is no longer limited merely to the privileged and the white. According to the recent Newsweek article recently discussed in Broadsheet, there is now more diversity in anorexia sufferers. Doctors are reporting more patients of color, more low-income patients, younger and older patients. We are finally achieving some equality of race and class, but only in regards to misery. There are no barriers to wretched body image.

Why are we wasting our precious hours on this time-consuming unhappiness? Why do we waste our energy on such harsh self-judgment? Is it that despite ourselves we cannot help assimilating the skeletal image of perfection idealized by our culture and our media? Is it the fault of this "tyranny of slenderness," as Kim Chernin writes in her 1980s classic "The Obsession"? Is it a question of power and control, linked to the subjugation of women? Did Susie Orbach get it right? Is fat a feminist issue?

Whatever its causes, in a world where 90 million children are "severely food deprived," according to Unicef, we should be ashamed of ourselves both for our gluttony and our remorse. And I am. If only shame were a reliable engine for behavior modification. All it does is make me feel bad, which inspires me to bust open a bag of cheese popcorn, which then makes me feel crappy about my weight. And so the seasons, they go round and round.

I have two daughters and I have done everything in my power to prevent them from assimilating, even being aware of, my idiocy about my weight. In front of them I never talk about how fat I feel, I never criticize my thighs, I never gaze wistfully at the size 2 Nicole Miller cocktail dress I can't bring myself to throw out, despite the fact that it's 15 years old and I could only fit into it because I hadn't yet had four children. For my daughters' sake I wish I could accept that my body is supposed to age and change. I wish I could view the belly that oozes over the top of my pants as a badge of maternal honor. I do try. I make sure that the women whose looks I admire all have sufficient fat reserves to survive a famine, and I make a lot of snide comments about the skeletal likes of Lara Flynn Boyle and Paris Hilton. My fantasy is that I will so foster my daughters' sense of self-esteem that they will not waste their time the way I have wasted mine.

So far it seems to be working, but the oldest is only 11, and while she seems completely unimpressed by thinness, I am terrified that she will end up like one of the children described in Newsweek. The girls about whom reporter Peg Tyre writes are my daughter's age and younger; some anorexia treatment centers now have patients as young as 8. According to Tyre, doctors are beginning to believe that anorexia is like depression and alcoholism, a disease whose origin is some combination of environment and genetic predisposition. Or, as the article put it, "potentially fatal diseases that may be set off by environmental factors such as stress or trauma, but have their roots in a complex combination of genes and brain chemistry."

Because I'm always ready to assume the worst about the genetic legacy I've handed down to my children, I worry that my lifetime of eating obsession may end up achieving a horrible next stage in one of my daughters. I used to refer to myself as a "theoretical anorexic," just as crazy when it came to body image, but saved by a lack of self-discipline. My daughters do everything better than I do -- they're smarter, more beautiful, happier. What if they end up better at anorexia, too?

A couple of years ago, I was doing research on pro-anorexia online communities for my novel "Murder Plays House." These are Web sites devoted to supporting anorexics, not in overcoming their disease but rather in cultivating it. On the sites girls exhort each other to maintain 50-calorie-a-day fasts, share "trigger photos" of emaciated actresses and models like Calista Flockhart, have goal weights that never seem to rise above 80 pounds, and trade tips on maximizing weight loss while avoiding hospitalization. Being immersed in this seriously creepy side of the anorexia tragedy made me vow to stop thinking about my weight ever again.

Alas, so much for resolutions.