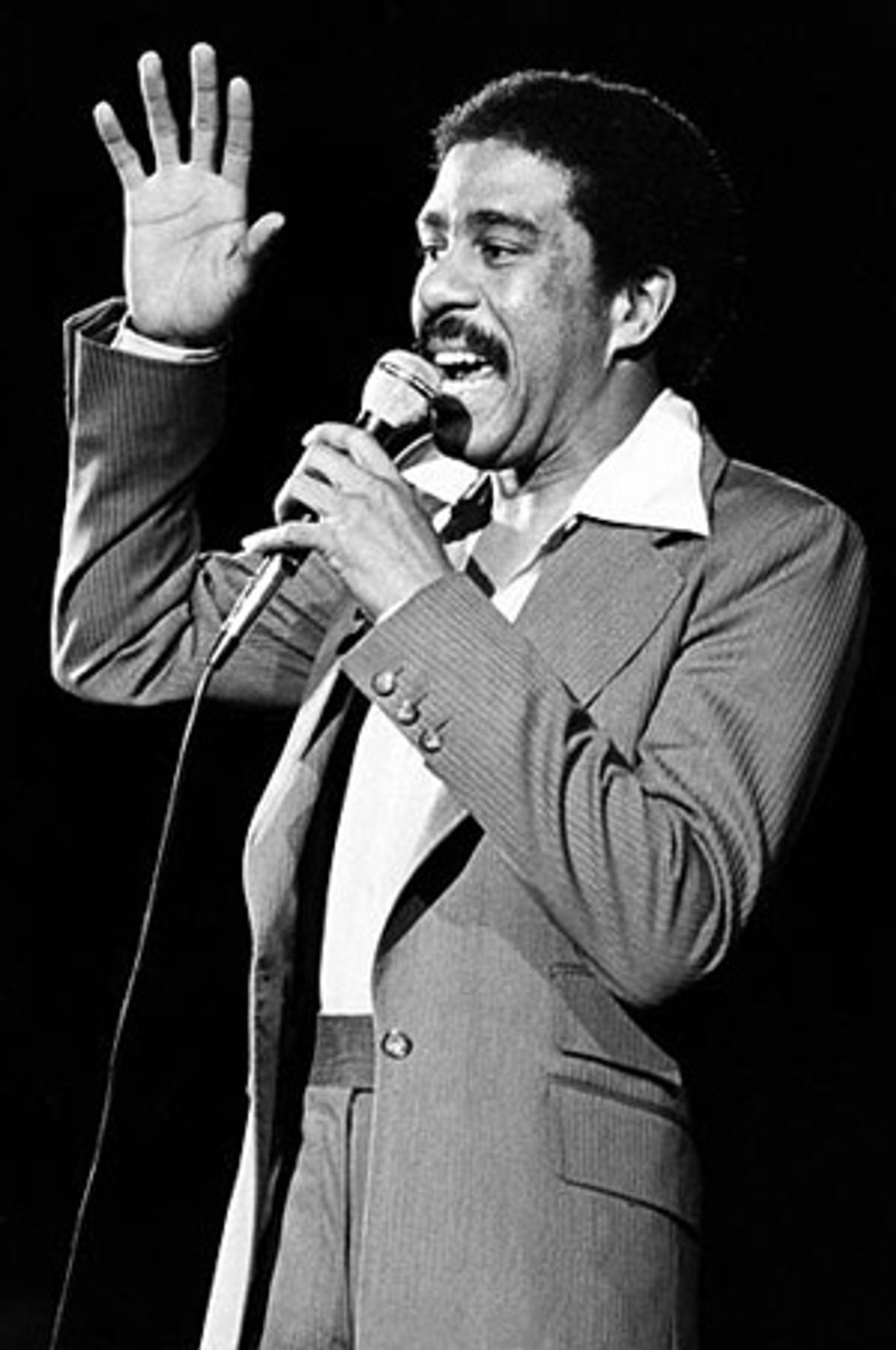 I would go to The Bitter End during the day and get a piece of paper with a number on it telling me when I went onstage -- like at a bakery.

 On that bench with me at one time or another were comics ... Richard Pryor, skinny, brilliantly shocking ... with jacket sleeves lengthened so many times, he looked like an admiral. (New York, early 1960s)

Colpix recorded my set there and it became my next album, "Live at Village Gate." Opening the show was a young comedian, Richard Pryor, and on the first night of my booking I stood in the wings with him as he waited to go on. He shook like he had malaria, he was so nervous. I couldn't bear to watch him shiver, so I put my arms around him there in the dark and rocked him like a baby until he calmed down. The next night was the name, and the next, and I rocked him each time. He never stopped being nervous -- at least not while I was there. (New York, early 1960s)

From "I Put a Spell on You: The Autobiography," by Nina Simone and Stephen Cleary (Ebury Press, 1991)

The Village Gate ... fine young comedians who do their acts before I go on ... a bold young man named Richard Pryor who uses language like I had never heard before on stage! (New York, 1965)

From "Makeba: My Story," by Miriam Makeba (New American Library, 1987)

I  first met Richard Pryor during my engagements at the Village Gate when he was appearing across the street at the Whiskey à Go Go. At the time he was still doing hilarious takeoffs on nursery stories like "Rumpelstiltskin" and "Rapunzel." We would run across Thompson Street to catch each other's performances, forming a mutual admiration society of sorts. Offstage, Richard was very shy and quiet around people he didn't know. He moved to Los Angeles around the same time I did, and turned out to be an old friend of our pianist Charlie Smalls. He was a regular at our Whiskey à Go Go gigs and just cutting his teeth on the L.A. scene. (1966)

I met a young black comedian who was doing an opening act for some of our concerts, Richard Pryor. Man, he was a funny motherfucker. He didn't have a reputation yet, but I knew he was going to be a big star. I could just feel it in my bones. I booked our band into the Village Gate and hired Richard to open for us. I have forgotten where I first heard him, but I just wanted people to know how great this motherfucker was. I paid him out of my own pocket and produced the whole thing. I think we were there for two weekends and the band and Richard just tore the place up. Richard opened and then we had some Indian music played by this sitar player and then my band played. It was really successful and I even made some money on the whole thing. Richard and I became good friends after that, and we would hang out and get high and just have a great time together. (New York, mid-1960s)

From "Miles: The Autobiography," by Miles Davis with Quincy Troupe (Simon & Schuster, 1989)

Richard Pryor was the cutting-edge bad boy of stand-up, the comic symbol of a rebellious era. I thought he was brilliant, and our show ["The Mike Douglas Show"] was the only one to book him repeatedly when he was virtually blacklisted by the networks. There was a time when Richard was considered too brash, too hard to handle, and -- let's face it -- too black for network television. All I knew was that, at his best, Richard was one of the funniest, most inventive comics I had ever seen perform. He was always welcome on our show, always devastatingly funny. I love Richard, and I wish I could say there were never any problems either, but I don't think it will shock you if I admit that wasn't quite the case. Adrenaline always ran high when Richard Pryor was around.

... If laughter is good for you, Richard Pryor added years to my life. He could have me doubled over, completely at his mercy, when he was rolling with one of his great character monologues, from the old ghetto street people to white suburbanites. (Late 1960s)

David L. Wolper, television producer
Many entrances to his mind

We had become a ministudio, providing as much programming for both television and the movies as several larger producers. But more than simply churning out product, we were making cutting-edge films that few other producers would risk ... "Wattstax," the first black concert film.

 The film still lacked cohesion.... [Friends] took Mel [associate Stuart] to a club in Watts. "I sat down to watch the show," Mel remembers, "and a young comedian named Richard Pryor came on. I realized I was watching a genius." After the show, Mel sat for hours with Pryor. Richard responded instantly and brilliantly to every question Mel asked. Mel came into the office the next morning raving about this brilliant comedian he'd met. Pryor became the glue that held the whole film together.

I'd never met anyone like Richard Pryor. There were so many entrances to his mind, so many unique paths to follow. Richard was an extremely complex man. One day, for example, Mel set up a chessboard for a game and told him white makes the first move.

... It was impossible not to like, even love, and certainly admire him. That was his first movie and, we like to believe, attracted the attention that led to his movie career. (Los Angeles, 1973)

From "Producer," by David L. Wolper with David Fisher (Scribner, 2003)

We went to a party. Richard Pryor was there. Everyone was stoned out of their minds and Todd [boyfriend Rundgren] kept telling me to mingle, but I just clung to him because I was so nervous.

... The only other person who was paying attention to me was Richard Pryor, who was utterly gorgeous and charming. He might have been stoned, but he was a doll. Suddenly, everybody started jamming in the middle of the floor, beating on things and playing guitar; Richard was playing bongos and flirting with me. Of course as soon as Todd saw that Richard was flirting with me, he changed his tune. (Los Angeles, 1974)

I met Richard in Calgary, Canada, the night before our first scene together [in "Silver Streak"]. We were both checking in at the Holiday Inn reception desk when we saw each other. No high jinks, no trying to be funny -- just a very warm handshake and an expression of admiration for each other's work.

The next morning we did our first short scene. There were police cars and helicopters and guns all around us. I jumped into a ditch next to him -- as I was directed to do -- and Richard said his first line, and I answered. Then he said some line that wasn't in the script, and I answered with a line that wasn't in the script. No thinking -- just spontaneous reaction. This was the start of our improvisatory relationship on film. (1975)

Even before we met I identified with Richard. He was always getting into scrapes, so was I. One of the first times I saw him, Richard was sitting behind bars. I went to the jail to visit, didn't say much. Told him I liked him, appreciated his comedy. Next time I saw Richard he was in hospital, for drug abuse. I stuck around. We had a bond. (Los Angeles, mid-1970s)

From "Out of Bounds," by Jim Brown with Steve Delsohn (Zebra Books/Kensington Publishing, 1989)

We got invited to Richard Pryor's house for Easter Sunday.

... Pryor's house was on Sunset Plaza Drive right above Sunset Boulevard and we pulled up and stood at the doorway. Right next to the doorbell was a gold-plated sign. As I remember, it read: "If you did not make an appointment to be at my home, and if you were not invited here, get your motherfucking ass off my porch."

My kind of guy.

We rang and a little black yes-man opened the door. All four Pointers bounced in and I walked right alongside them. I couldn't believe it. I was inside Richard Pryor's house! That Nigger's Crazy! What was I doing here? I was loving it!

I met the man. "Hi. I'm Thomas Henderson of the Dallas Cowboys."

"Hey, man, how you doin'? What's happenin'?!" Pryor was friendly, like he decided on the spot that he was going to like me. And I liked him. Chicago, Austin, we came off the same streets and right from the git we both knew it. He was cracking jokes and I told him a few of my own. He looked at me like, "Stick to football." You don't mess with Richard on his own turf. (Hollywood, 1976)

From "Confessions of an NFL Casualty," by Thomas "Hollywood" Henderson, with Peter Knobler (G.P. Putnam's, 1987)

Jennifer Lee, actor and wife of Pryor
Broken and unloved

I can see through the French doors into the atrium where Richard is being photographed for a Newsweek cover. He spots us, flashing an embarrassed smile. Richard seems painfully shy when he walks in, waiting for Lucy [Saroyan] to introduce us. She presents me as if she owns me and is sharing me out of the goodness of her heart. Nervous and talking nonstop, Lucy's practically selling me to Richard, telling him how beautiful and wonderful I am and how I just don't know it. Richard offers me his hand. "Hi, Jennifer, I'm glad you're going to be working here [at Pryor's house as an interior decorator] ... happy to meet you." I know him instantly. Immediate kinship -- complete affinity! I see his shyness isn't the whole story; his eyes dominate me and tell me that he knows about me, much more than what Lucy has told him. And like his house, he looks broken and unloved ... His quiet demeanor is mysterious and powerful -- everything his reputation is not! There's no sign of the vitriolic madman here. (Northridge, Calif., 1977)

From "Tarnished Angel: Surviving in the Dark Curve of Drugs, Violence, Sex and Fame," by Jennifer Lee (Thunder's Mouth Press, 1981)