A growing market allows investors to make money off of disease and natural disasters. And so far, their predictions have been dead-on. 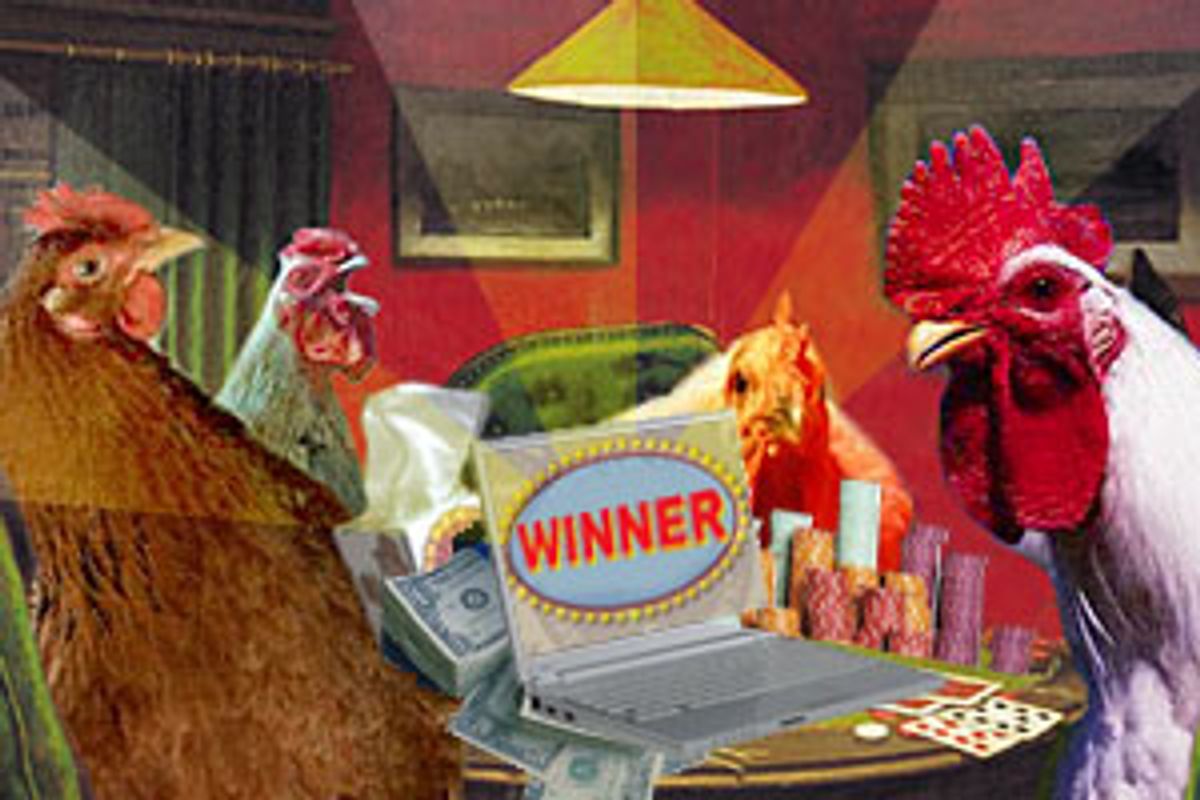 On Nov. 1, Intrade, a Web site that allows people to bet on the likelihood of future events, issued a press release titled "Trading on Bird Flu -- 65% probability of U.S. case by March 2006!" The release announced that the trading activity on the exchange's bird flu contracts -- offering savvy "investors" a chance to gamble on when the first strain of the deadly H5N1 will be confirmed in the United States -- had doubled in the last month. The report, put out by Intrade P.R. executive Mike Knesevitch, ended with an ominous, sobering claim:

"Can these markets give us insight into global events like pandemics, hurricanes and politics? In the short history Intrade has put together, the answer is YES."

If these predictive markets are as startlingly accurate as they say, this spring the U.S. will get its first case of bird flu and some of us may die.

Intrade launched its two bird flu contracts -- one predicting that the potentially deadly, pandemic-causing Asian bird flu will hit the U.S. in December, the other that it will hit in March -- on Oct. 18. (The December contract is now trading at 6, meaning the market is currently predicting a 6 percent chance of the flu hitting the U.S. on or before Dec. 31, the March at 29.6.) Now, with close to $34,000 worth of investor money wrapped up in them, the bird flu contracts are among the most popular on the futures markets site, and company spokesman Brian Keating says he expects betting on the bird flu only to increase as the contracts' closing dates -- Dec. 31 and March 31, respectively -- approach and as more cases of the bird flu crop up around the world.

Contracts on the Intrade exchange can be bought or sold between other members, just as with any other stock exchange, but if an investor chooses to hold on to a contract price until closing, that investor can lose the entire amount invested -- or make a tidy profit. If, for instance, someone purchases a December bird flu contract at a purchase price of, say, $16, and a strain of H5N1 is confirmed in the U.S. on or before Dec. 31, that person wins whatever his or her buy price is against 100. In other words, the profit on each contract purchased at that price will be 100 minus 16, or 84 points, multiplied by 10 cents per point or $8.40. (Because contracts trade between 0 and 100 "points," you can think of the price at any time to be the percentage probability of that event occurring.) According to Keating, most investors buy about $500 worth of shares.

Even though the average trader doesn't spend tons of money -- some do, but most of it is recreational -- in this case, his or her winnings may come at a steep price for thousands of people, placing Intrade investors in a tenuous ethical quandary: Is this market offering the chance to win blood money?

The Business of Soothsaying
Intrade and its sports-minded sibling, TradeSports, are part of Trade Exchange Network Limited, a private corporation formed in Dublin, Ireland, in 2000. The trading exchange offers binary options on stock indexes, financial indicators, weather, politics, sports, entertainment, current events and legal affairs. The exchange network has more than 61,000 members in 123 countries and offers close to 2,000 unique contracts. Around 80 percent of its members are based in the United States, and 65 percent of its members are from the investment, banking and trading community. Many members make a living off of the exchange.

Unlike some online sports betting Web sites, Intrade and TradeSports do not profit off the outcome of events. There are commissions charged for trades (4 cents per trade executed on the exchange), but there is no "vig" -- a bookie's fee paid out on losing bets -- paid to the sites directly. Under the Wire Act, it is technically illegal to gamble via online betting sites in the U.S. -- or to solicit gamblers for an offshore site. However, Trade Exchange Network representatives say they're confident that, because they do not profit from the outcome of an event (read: no vig), they do not fall under Wire Act restrictions.

Futures markets traders, for their part, do not consider themselves gamblers, but investors: Instead of betting on the Super Bowl, TradeSports members "invest" in its outcome. The distinction may seem merely semantic, but unlike mere sports betting sites, the TradeSports/Intrade exchanges offer a more varied lineup of events on which to wager and may offer a glimpse into the outcomes of some of the most pressing current events. (Other futures markets, like the Iowa Electronic Markets and HedgeStreet, offer similar alternative markets.) In the five years since its inception, Intrade has been accurate in predicting elections, the new pope, the impact of Hurricane Katrina, and the capture of Saddam Hussein.

Intrade's Knesevitch is a former hedge-fund trader and manager with more than 25 years' experience. In addition to promoting Intrade, he serves as a spokesman for the futures markets. He sees trading on things such as the bird flu, Hurricane Wilma and sporting events as a natural evolution of the business-savvy trader. To keep informed about the contracts Intrade offers, Knesevitch is constantly poring over information -- from AP wire reports to government documents to weather changes -- that could have an impact on the market. When asked about the bird flu, he rattles off an array of facts about its origins, the potential path of the flu spreading via Indonesia, the latest Centers for Disease Control reports, and the movement on big pharmaceutical trading on NASDAQ. As he sees it, we're safe from seeing bird flu for Christmas. "Right now, I'd sell the December contract on the bird flu," he says.

John Murray, who works in the financial industry, is actively trading bird flu shares. He claims it's a way to use his real job skills to profit off of things that are a little more interesting. But does he worry about profiting from tragedies?

"That doesn't really bother me at all," he says. "In my opinion, [Intrade/TradeSports] is just a little more in-your-face than the stock market. The stock market took a hit after 9/11, so something along the lines of the bird flu would have an impact on all aspects of the economy."

Murray says he tries to go against the general media angles when analyzing markets like the bird flu and that he's much more prone to looking at things more scientifically when he gathers his information. "I just prefer to stay away from so-called experts who have an ax to grind," he explains. "Politicians making a statement for the sole purpose of getting people nervous wouldn't impact my trading activity as much as who's quoted in the New York Times Science section."

Murray says he does monitor the market for signs of what's coming down the line with the bird flu. He also says that drastic movements in the marketplace are alarming when it comes to contracts of this nature. And recent reports of a strain of avian flu in Canada did spook him. "That report did tweak the market a bit," he says, noting the fast-approaching closing date for the December contract. "That could be a real scary thing to watch in the next couple weeks."

Given TradeSports/Intrade's history of accurate predictions, the activity on its bird flu contracts could be one of the best indicators of when the disease will touch down on our shores. And Knesevitch adds that at this stage of the contract if the price of the bird flu spikes, it's time to prepare for the worst.

Misery Loves Indexes
On the TradeSports public message boards, where active members generally go to talk about the day's trading activities, the ethics of profiting off a pandemic are under debate. Soon after the bird flu contract opened, a member with the handle "go-cards" posed the following elephant-in-the-room question: "Anyone else feel a little bit guilty about betting on the bird flu coming to the U.S.? This is a tough one to root for"

The question was volleyed back and forth, and then a member named "Strategery" chimed in: "As long as someone doesn't put their entire savings into buying long on the bird flu and then buys a ticket to Asia to find a bird to bring back ... fine by me."

The Intrade market allows, even thrives, on insider information. Knesevitch confirms that a lot of the market's members work for government entities and often have the ability to move the market on national events well before news of them has filtered through the media. However, he assures, if a desperate trader with his life savings wrapped up in the bird flu contract were to go as far as to infect himself to win, the company would be aware of it.

"We would be able to see who that would be because they would most likely be trading hundreds of thousands of dollars," he says. "It could happen, but it's highly unlikely. Most of our traders are more sophisticated than that."

Dave Saigel, from the Centers for Disease Control, who says he was not aware of the bird flu market, concedes that it might be a useful prediction tool -- and may also help build awareness of the dangers of the disease and its spread. What's more, he says, the markets have "picked great months for their contracts. December and March are prime flu months."

Jack Marshall, president of Pro Ethics, a consulting firm used to educate organizations on ethical dilemmas in the workplace, agrees that futures markets -- and betting on things like the bird flu -- may be more beneficial than hurtful to society. "It would be different if, say, after 9/11 people are betting on where the next person's remains would be found, but this is far less sinister than that," he says. "In postmodernist America we have a black humor and a detachment from a lot of catastrophe anyway. Betting on an abstract event, buying futures in abstraction doesn't necessarily make things any worse." Marshall argues that even the New York Stock Exchange allows people to profit from other people's misery.

And Marshall says he loves the whole "wisdom of crowds" aspect of futures markets. He says these types of markets offer valid projections about events and do so without any sort of bias -- and he finds more credibility in these markets than any kind of scientific facts. "I'd love to have a doomsday market. If people are betting on when the world is going to end, I'd pay more attention to that than what so-called experts are predicting."

Knesevitch says there is no doomsday market in the works right now. But betting on terrorism and projecting whether the United States will be attacked is not out of the question: "We just have to wait until the Homeland Security Department offers more guidance. Their new security-alert color schemes have muddied the waters too much for us to put together an accurate contract."

A.J. Daulerio is a managing editor for the Black Table.