In time for the holiday shopping crunch, Salon recommends four fantastic kids books that will delight parents, too. 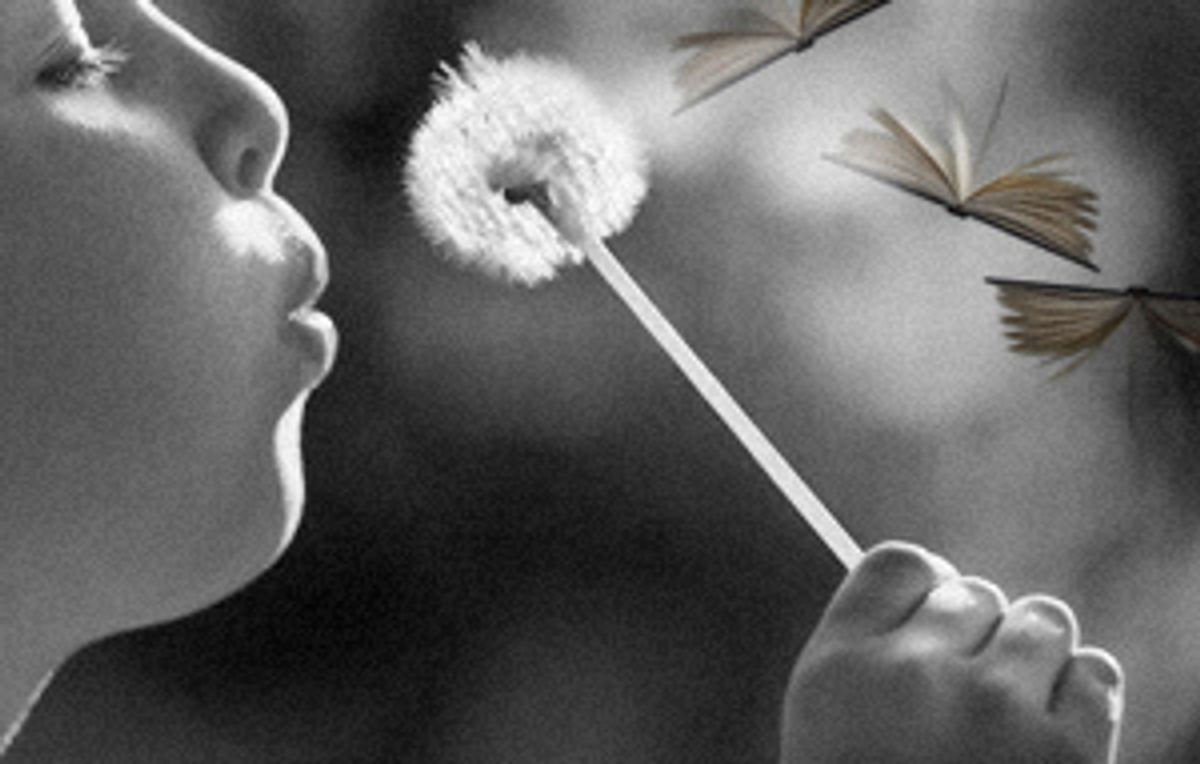 Parents just love giving kids books. They're foolproof feel-good gifts: brimming with imagination and intellectual promise -- and requiring no AAA batteries or confounding instruction manuals. Happily, when books are good, kids love getting them, too. But, at this time of year especially, when store shelves grow crowded with holiday titles and new releases, the true challenge lies in picking a book that will please both parent and child -- one that balances wit with whimsy, artfulness with approachability, and substance with style.

"Goodnight Moon," "Green Eggs and Ham," "Eloise," "Runaway Bunny," "Madeline" and "Where the Wild Things Are" -- to name just a few enduring books that delight as much in middle age as in youth -- combine idiosyncratic illustrations and poetic texts to serve both children and parents a measure of what they most desire: adventure and nostalgia. Think about it: Eloise zigzags her merry way around the Plaza Hotel only to end up back at the warm bosom of her nanny. Max sails over choppy seas and confronts carnivorous beasts, but makes it back home to Mom and his still-warm supper.

The encouraging news is that to be goodies, books need not be oldies. In 2005, if you have the patience to look beyond piles of celebrity vanity projects and TV tie-ins, you can find plenty of books to enjoy -- from both established authors and newcomers. So, as a public service to our readers -- and to help streamline your next holiday shopping trip -- Salon has selected a pair of picture books and a pair of novels that are sure to delight the budding bookworms on your lists.

Featuring soothing plain language and playful illustrations, "A Good Night Walk," by Elisha Cooper, has all the makings of a bedtime classic. Cooper's narrator offers his young readers a simple but alluring adventure: "Let's go for a walk, along the block, and see what we can see, before it's time for bed." But the sensual catalog that comes next -- of chattering squirrels and swaying oaks, black-and-white cats and telephone wires, slamming screen doors and sweet cut grass -- creates a complex vignette of a child's world. Imagine the bedroom landscape of "Goodnight Moon" made communal, with the nursery rocking chair transformed into a neighbor's red wheelbarrow.

Cooper's previous book, "Dance!," was named a New York Times Illustrated Children's Book of the Year, and his confident, sensitive hand is once again in evidence in the mysterious watercolor world of "A Good Night Walk." Giant, moss-green oaks shade a familiar street, and a quivering black line of pavement pulls both the reader's eyes and the narrator's journey across the page. Though the tale stems from Cooper's memories of strolling with his young daughter through the Berkeley, Calif., hills, the soft colors and abstract forms and faces of his illustrations invite readers to insert themselves into the landscape, draping his sketchy skeleton with their own personal details and local color.

The "story" -- if you can call it that -- is nearly nonexistent, just an out-and-back jaunt down the road, a parent and child watching as laundry is hung to dry on a clothesline and then carried in for the night. It's not exactly the gnashing teeth and roaring rioting of "Wild Things," or the hallucinatory hilarity of "Green Eggs and Ham," so will it bore young readers? That seems unlikely, especially if parents help children use the text as a prompt for their own bedtime storytelling. Cooper has said that his book is about "small changes" described by "someone who had never seen these things, or anything, before." And sometimes seeing is adventure enough.

"The Baby on the Way" -- written by Karen English and illustrated by Sean Qualls in his children's book debut -- has a similar graceful stillness. While the title alone might put some people off (a recent New York Times review noted that it smacks of those "insufferable stories about how Mother is having a baby and I help her get ready because I'm a big girl and she says I can be her helper  and that is swell for my self-esteem"), readers who make it inside the covers will be rewarded with a refreshingly clear-eyed story.

Painted with an expressionistic ilan reminiscent of social realist painters like Ben Shahn and the beloved children's illustrator Ezra Jack Keats, Qualls' muted, primitive pictures provide an elegant backdrop for English's solemn tale of family and history in an African-American clan. The book begins with young Jamal taking his grandmother's hand as she gathers tomatoes from their rooftop garden and asking -- in the way children sometimes do -- if she was ever a little girl. "A little girl  Why yes, I was a little girl -- once," Grandma answers with a chuckle. "Your 'ol grandmother was even once the baby on the way"

The rest of the story is narrated in flashback, as downstairs in an urban apartment, Grandma slices her just-picked tomatoes for a garden salad. She tells Jamal how she was the 10th child born to a farming family; how her father ran uphill through the fields to be near her weary mother as she went into labor; how her big sister, "apron still covered in flour," hurried to town to fetch her Aunt Nannie and her mysterious "birthin' bag"; how the midwife shooed all the other siblings -- serious-faced and crying -- off to their grandmother's house; and how her father "paced and prayed" on the porch while Beverly the dog whimpered in anticipation.

Beulah Rose -- as she is called once she comes "screaming loud" into the world -- feels no temptation to spruce up her story in the retelling. Though she remembers her mother's eyes being tired, she also recalls her pride when as a young girl, she posed on a pony for a portrait in a pretty yellow dress. Now a mother and grandmother herself, she reminds Jamal that he, too, was once "the baby on the way," and warns of a world that's tough as well as tender.

When it was released in Britain, "The Illustrated Mum," by prolific children's author Jacqueline Wilson, was showered with awards -- including the Guardian Award for Children's Fiction and the Children's Book of the Year Award. Unfortunately, readers living stateside had to bide their time for more than four years before this spring's first American printing -- but I dare say it was worth the wait.

In "The Illustrated Mum," Wilson spins a quirky modern drama chronicling the lives of two young girls, Dolphin and Star, as they struggle to come to terms with their mother Marigold's mental health problems. Marigold is alternately depicted as both a fascinating free spirit -- who gets a new tattoo whenever the whim strikes -- and a frightening firecracker, prone to three-day benders and manic mood swings that prompt her to spend the welfare checks on dozens of fancy cakes instead of school lunches.

Though this story could easily melt into melodrama, Wilson maintains a deft touch with her characters, keeping them firmly planted in a real and recognizable physical and emotional landscape. Star, the elder girl, tired of having to take care of her mother and her younger sister, retreats to the local McDonald's parking lot to hang with her high school clique and trade kisses for French fries and butterscotch sundaes. Ten-year-old Dolphin, our narrator, is devoted to Marigold and clings to the hope that she'll "get better," but fears Star has left them behind. Even Marigold escapes caricature as Wilson paints a complex, poignant portrait of a mother struggling to do right by her girls while wrestling with an overwhelming illness.

Wilson, a superstar in her home country, was this year named the U.K.'s children's laureate -- a post she will hold for the next two years. "The Illustrated Mum" makes for a humorous, human introduction to her work and is a sterling example of the ambitious young-adult novels coming out of the U.K. today.

Kaye Umansky, author of "The Silver Spoon of Solomon Snow," has drawn on a different British literary tradition for inspiration: Dickens. In the jacket copy of her new release she writes, "A while ago, I went on a 'reread Charles Dickens binge.' Inspired, I cried, 'I can do that!' I couldn't."

Her self-deprecation aside, in "Silver Spoon" Umansky has produced an intriguing amalgam -- two parts Oliver Twist and one part silent movie, with a dash of Lemony Snicket-style snark thrown in for good measure. The plot is a high-camp quest, centered on the adventures of Solomon Snow, a miserable foundling raised by Ma and Pa Scrubbins in the grimy village of Boring, who must follow a clue engraved on a silver spoon to uncover the secret of his true parentage. The only hitch is that Pa Scrubbins long ago sold Solly's spoon into hock to pay for a round of pints -- and so our young hero sets off on a journey to reclaim it, accompanied all the way by his sidekicks Prudence, a quick-witted aspiring writer, and Child Prodigy, a manically cute performer on the lam from the circus.

In a spoof of stodgy Victorian novels, Umansky introduces each chapter with a formal synopsis, spelled out in curly fonts and fleurs-de-lis. As Solomon and his compatriots make their way toward town, a page break announces: "Come to the Happy Land: In which Solly, Prudence and the Prodigy arrive in Town, a song is sung, and sweets are eaten." The short chapters practically beg to be read aloud by parents (with tongues planted firmly in cheek) or gobbled up by clever kids in big, sweet gulps.